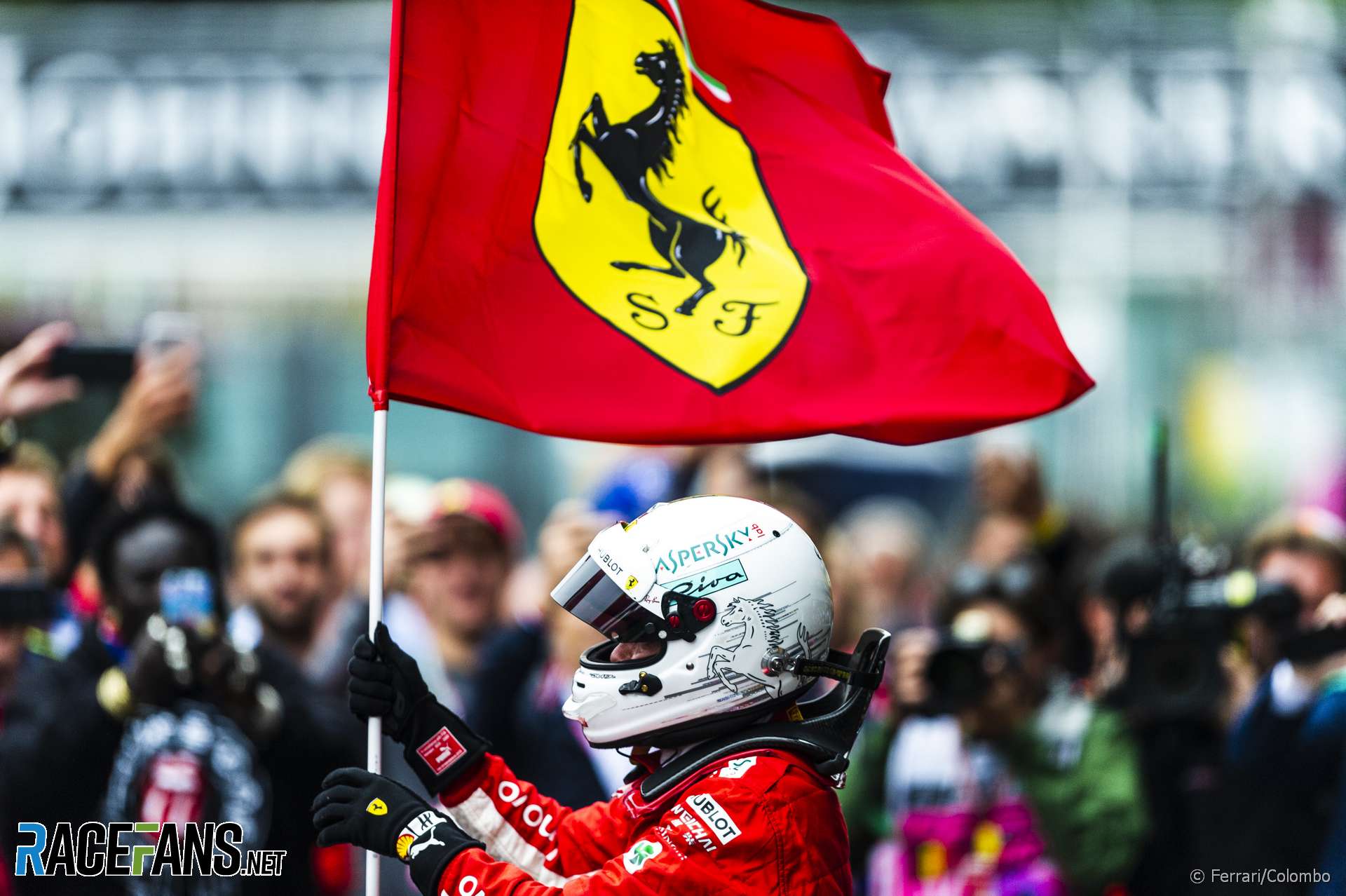 The rain which fell during Q3 masked it, but this was a weekend of Ferrari domination.

The red cars were quickest in all three practice sessions. They headed the times in Q1 and Q2 as well, albeit by a slender margin over Mercedes. Then in Q3 the rain fell, Lewis Hamilton did his thing and his W09 took pole position by seven-tenths of a second.

But on race day Mercedes couldn’t contain Ferrari the way they had in Hungary. A power unit penalty meant Valtteri Bottas started from the back, depriving Hamilton of one line of defence against the Ferraris.

As they rounded the kink Vettel drew alongside and nosed ahead. Hamilton immediately tucked in behind and picked up the powerful tow Vettel had just enjoyed, and used it to take a look himself. But they were both running out of straight and running out of top speed.

Behind them the Force India pair – whose mere presence on the grid was the biggest story of the weekend – almost pounced on both of them. Esteban Ocon and Sergio Perez, who’d capitalised on Saturday’s rain to annex the second row of the grid, thundered up behind Hamilton and Vettel, and for a thrilling moment ran four-abreast.

Ocon, who had his nose down the inside of Vettel’s car for the lead, wisely backed out of the move, but lost third place to his team mate by doing so.

Further back a huge crash at La Source brought the Safety Car out. That handed Hamilton the chance to regain his lost lead. And for a moment, it looked like he was going to.

Vettel admitted his restart “was probably one of my worst”. He put his foot down as they approached Blanchimont and Hamilton tracked him as though an invisible cord connected the pair. “It wasn’t really a surprise,” Vettel admitted. “I had a lot of wheel spin so I couldn’t jump him.

“Then I knew that I don’t have anything to fear because he can’t pass me until turn 19.” Hamilton indeed had a look at the inside of the chicane but Vettel braked cleanly on the racing line, kept the position, then measured his speed carefully through the following tight corners to keep Hamilton behind. “I focussed on those two corners: turn 19 exit and turn one and that worked really well.”

The Safety Car was needed because of an astonishing error by Nico Hulkenberg which ultimately wiped out one-quarter of the field. Having been relegated to the rear of the field by multiple power unit part changes, Hulkenberg admitted he was caught out by how little grip there was running in his rivals’ turbulence.

He braked too late and hit Fernando Alonso hard from behind which launched the McLaren up and over Charles Leclerc’s Sauber. All three were eliminated, and Leclerc became the first F1 driver to feel thankful for the presence of the Halo once he spotted Alonso’s tyre marks on it.

There were two other victim: Alonso hit Daniel Ricciardo’s rear wing, and the Red Bull driver then skidded into Kimi Raikkonen. Both pitted for repairs and although they returned to the track, later retired.

Alonso fumed at Hulkenberg afterwards and the Renault driver was quick to explain his mistake both publicly and to the stewards. The latter issued him with a 10-place grid penalty for Monza.

Six years earlier Romain Grosjean had been banned for one race for a similarly destructive crash, so shouldn’t the same apply to Hulkenberg? FIA race director Charlie Whiting, who can report incidents to the stewards but does not rule on them, offered his view, explaining that the Grosjean incident prompted the creation of the ‘penalty points’ system F1 now uses.

“I think they looked back at the similar tyre of accident in 2012,” he said. “The accident was in fact what gave rise to the penalty points system.”

“I think Grosjean had four different incidents,” Whiting explained. “The idea was if he’d had those accidents at each of the tracks for three points, then that would be quite justified to ban him for the race. So that was the way it was made.”

Back at the front of the field Hamilton was giving chase as best he could, but the gap between him and Vettel was almost four seconds by lap 14. Hamilton edged it back as far as he could, closing to within 3.2s of the Ferrari, then made for the pits.

The pit stop was clean and Hamilton lit up the track on his fresh tyres, which were worth around two seconds compared to a used set. He set the fastest sector times of the race so far in the final two sectors of his out lap and the first sector of his next lap, but by then Vettel had already come in.

His pit stop was the quickest complete time of the race – a tenth faster than Hamilton’s – so much so that Vettel confessed to being surprised when it was time to go again. Hamilton could have done without catching Verstappen at the end of his out-lap, but it didn’t cost him the lead.

Vettel pulled away again, doubled his gap over Hamilton from 5.2 seconds to 11 in the space of just seven laps towards the end before backing off. “I could see he wasn’t really pushing the last 15 laps, so I could relax a little bit more,” said Vettel.

Hamilton had to take greater care because Mercedes were struggling more with their tyres than Ferrari. “A particular place they really did well today is they didn’t have any blistering,” Hamilton admitted. “The tyres worked really well for them today, [that] definitely wasn’t expected.”

Mercedes’ inability to treat its tyres as well as Ferrari did exacerbated their straight-line speed weakness. “You can see there’s a deficit,” said team principal Toto Wolff. “It’s low-speed, it’s the traction and this is what I would summarise as the main weaknesses at the moment. Today we were, compared to Ferraris and the Red Bulls and Force India, the car that was cooking the tyres the most.”

A race which had begun spectacularly resolved itself into a procession, albeit it one involving the fastest cars F1 has ever seen on one of the last truly great racing circuits. After Hamilton took the chequered flag in third place, only one more car finished on the same lap in the next 50 seconds: Verstappen.

Bottas rose to finish fourth in spite of committing a similar error to Hulkenberg at the start, albeit less grave. He rear-ended Sergey Sirotkin at turn one and had to pit for a new front wing.

The Hulkenberg incident was later blamed for why the stewards took so long to investigate Bottas, notwithstanding the fact all the drivers involved in the other crash retired and an investigation could be postponed until after the chequered flag. Bottas eventually had five seconds added to his race time.

Had the stewards reacted more quickly, and Bottas had to serve his penalty in the pits, would he have been able to reach fourth place? He made his final pass on Perez on lap 40, and had the five-second gap he needed with two laps to go. But had he taken his penalty sooner he would have been on older rubber when trying to make his moves, and if nothing else it would have been a closer-run thing.

For the most part Bottas was able to blast past defenceless rivals on the extended DRS zone approaching Les Combes with little difficulty. But that didn’t stop him turning on the style when the opportunity presented itself. His side-by-side dive into Eau Rouge alongside Brendon Hartley evoked memories of Mark Webber’s move on Fernando Alonso at the same corner in 2011.

The Force India drivers were surely never going to fight Bottas too hard as, with the team’s points reset to zero, they needed to bank a solid result. This they delivered, with Perez a fine fifth ahead of Ocon. In the ‘best of the rest’ class, this was an emphatic one-two.

They were followed home by the Haas pair, Kevin Magnussen flying on his soft tyres behind Romain Grosjean. Pierre Gasly dodged the first corner chaos and bagged two more points for Toro Rosso, while Marcus Ericsson’s 10th for Sauber ensured they stay ahead of Force India for the time being at least.

There was no reward for soon-to-be-ex-Renault driver Carlos Sainz Jnr despite climbing eight places after dropping to the back of the grid due to an engine change.

Vettel returned from the summer break in the best way possible by scoring the 52nd win of his career. He has now surpassed Alain Prost’s former record tally of 51, making him the third most successful F1 driver of all time in terms of victories.

Is he also on course to surpass Prost’s tally of four world championship titles? With he and Hamilton occupying the top two positions for the third time in the last four races, and their team mates increasingly looking like support acts, it’s almost inevitable one of them will.

Hamilton’s title lead has been cut to 17 points. If Ferrari’s power advantage is decisive at Monza, and Singapore remains a bogey track for Mercedes, he is in real danger of being unable to stop Vettel taking the lead.

The series now heads to Ferrari’s home race, where Vettel will be looking to cut further into Hamilton’s title lead and give the team its first Italian Grand Prix win since 2010. He may have been ahead in the points standings at this point 12 months ago, but his title hopes arguably look better now than they did then.