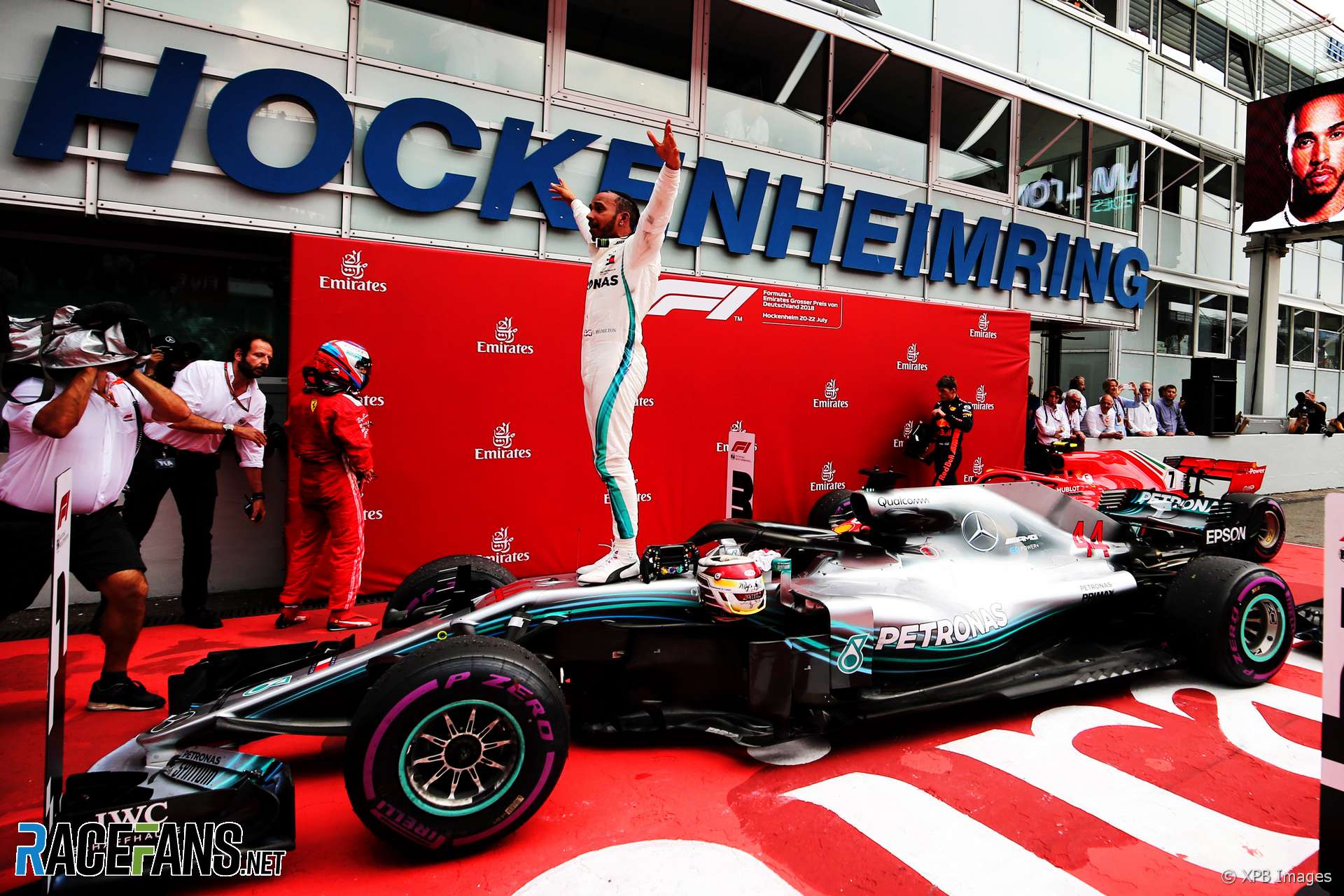 Hamilton’s shot at a win seemed over after qualifying, when the Mercedes driver suffered a hydraulic failure with left him 14th on the grid. In the race, he looked set for fourth place after quickly making his way through the midfielders. He did a long first stint on the soft tyres, then switched to ultra-softs before the rain began. Hamilton halved Vettel’s 22-second lead – then the Ferrari crashed out.

When the Safety Car appeared Mercedes initially chose to pit both drivers, but in the confusion Hamilton stayed out. This helped win him the race, as on the next lap Raikkonen pitted to change his 39-lap-old soft tyres. At the restart Hamilton withstood an effort by the fresh-tyred Bottas to take the lead through turns six, seven, and eight thanks. The team then called off the fight.

Hulkenberg continued his dominant run of qualifying form over Sainz on home soil and although he couldn’t out-qualify the Haas drivers he beat both in the race. A strong start got him ahead of Romain Grosjean, and he took advantage of Magnussen’s mistake when the rain began to fall Magnussen. Like the Haas drivers Hulkenberg briefly switched to intermediates, then got back onto slicks for the remainder of the race.

Can a driver who started and finished behind his team mate be considered a star? Ocon may have gone out in Q1 – by just 0.018 seconds – but he’d only had one dry practice session due to rain on Saturday morning and Nicholas Latifi driving his car in the first session. From 15th on the grid he was 12th after the first lap, then he undercut Alonso through the pits just before rain began.

Like his team mate he made the right call to stay on slicks, but unlike Perez he didn’t spin. As a result by the time the Safety Car came in he was seventh. Neither Force India was able to keep Grosjean behind, and while Ocon finished behind his team mate, he deserves credit for how he handled a tricky race.

Ferrari and Sebastian Vettel went into the German GP with a clearly superior car. The first half of the race went mostly to plan, though a longer first stint than Raikkonen dropped Vettel behind his team mate. After complaining several times about how he was destroying his tyres, Ferrari engineered a swap of positions and Vettel opened up a ten second lead. Vettel lost a lot of time to Hamilton when the rain began to fall, and had just matched Hamilton’s pace when he skidded into a barrier, throwing away a precious 25 points.

Only Stoffel Vandoorne, with a Mclaren chassis which is not performing correctly, was slower than Stroll in qualifying. Meanwhile Sergey Sirotkin qualified the other Williams 11th. Stroll ran behind his team mate in the race until Williams brought him in first, moving him ahead of Sirotkin via the ‘undercut’. He gambled on intermediates but a brake problem put him out soon afterwards.

Bottas showed why Mercedes signed him for next year as he split the Ferraris in qualifying, and passed Raikkonen for second when the rain fell. He pitted during the Safety Car period and although he suffered a long stop he only lost one place, to Hamilton, which he would have lost anyway. He only had one chance to pass Hamilton before team orders were issued.

Raikkonen had an average weekend after being out-qualified by Bottas, but was in with a chance at the win after the safety car. Could he have held off Hamilton by staying out on older tyres? He pitted for fresh tyres, so we’ll never know.

Fourth looked like the best available for Verstappen, who didn’t even have his team mate to fight with due to Ricciardo’s engine penalties and early retirement. Verstappen didn’t have a lot to lose by gambling for intermediates, as Hamilton would have most likely gotten by regardless.

Despite qualifying behind his team mate and struggling in his first stint after being passed by the Renaults, Grosjean recovered to sixth in fine style. He went from 11th to sixth in the final 11 laps, passing Perez for seventh on the final lap. The Force India driver had a spin in the damp conditions but took advantage of many drivers who pitted for intermediates, taking seventh.

Ericsson was back in the points for the first time since Austria. As usual Leclerc was much quicker in qualifying, but unlike his team mate Ericsson had a clean race.

Hartley scored his second points finish of the season by resisting his team’s call to pit during the rain. He stayed on slicks for the rest of the race and held off Magnussen who was in a much quicker car. Gasly in the other Toro Rosso was the only driver to pit for the full wet tyre and paid dearly.

Unlike Hulkenberg, Sainz did not have Renault’s new front wing. He qualified behind his team mate and a penalty for overtaking under the Safety Car cost him a points finish to Hartley.

McLaren’s struggles continued: Vandoorne qualified last with his aero problem and lost time in the race with a mystery engine glitch. Alonso’s shot at points was ruined after he switched to intermediates despite warning the team it was too soon.

Despite qualifying well, Sirotkin lost multiple places over the first few laps and eventually retired with an oil leak under the Safety Car.