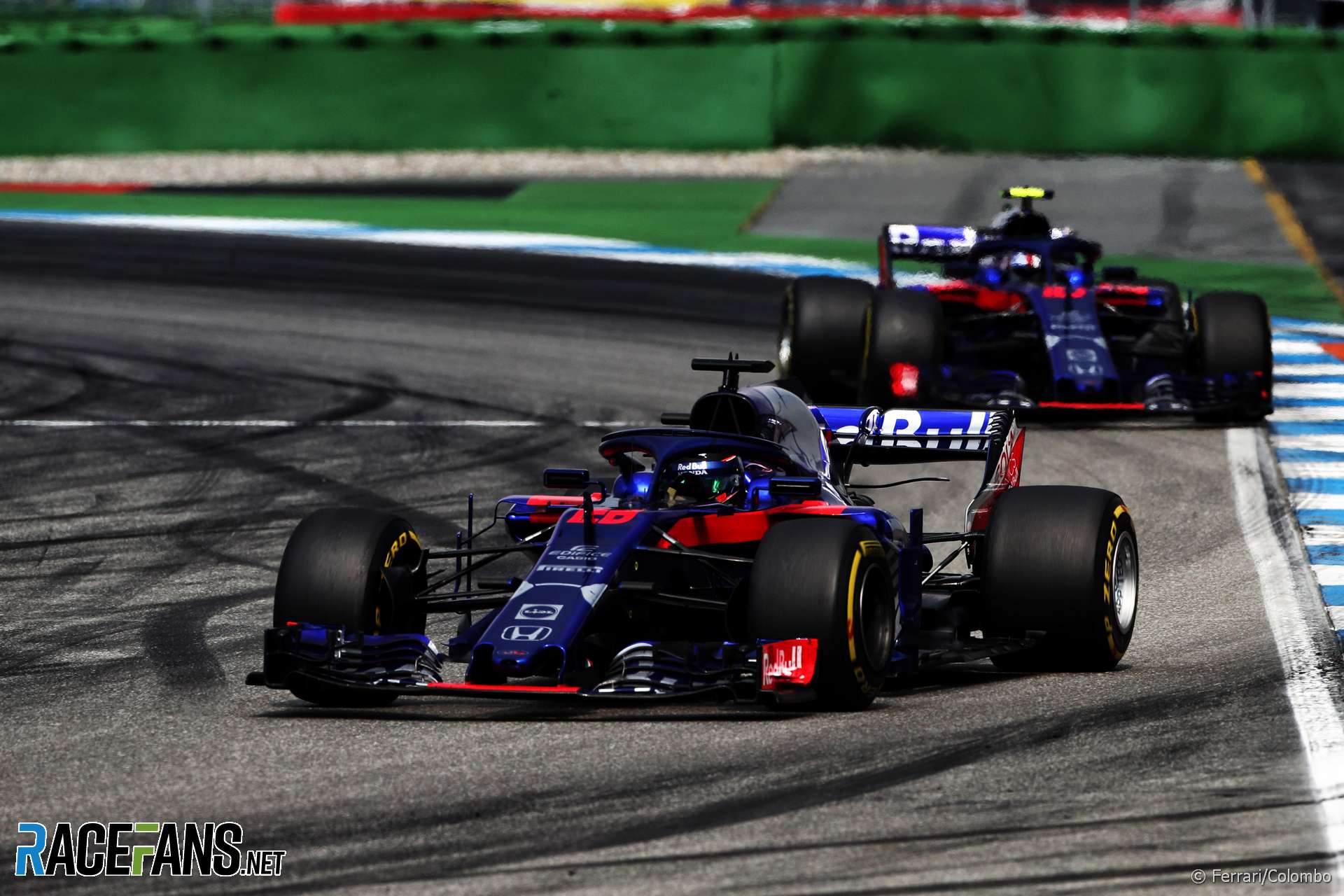 One of the most surprising moments of the German Grand Prix was Pierre Gasly’s gamble on full wet weather tyres when the rain fell. But his team mate Brendon Hartley stayed on slicks – a decision which earned him his second points finish of the year.

Both Toro Rosso drivers were given instructions to pit when rain first began to fall at the Hockenheimring. Gasly came in and was surprised to see his crew fit a set of full wet weather tyres.

However the rain was only falling in the Spitzkehre area of the track. Hartley told the team he didn’t think the circuit was wet enough to run on anything other than slicks.

“The lap they told me to come in, I had the feeling that it was still going to be much quicker on slicks as long as I could survive at turn six,” he said.

“If it was a downpour, it was absolutely the wrong decision. But I looked at the sky, I didn’t go against the team, I just asked the question: ‘I think I can do one more lap’.”

Hartley took it one lap at the time, waiting to see if the track conditions continued to deteriorate. “We stayed out one more lap, then we saw, ‘OK, maybe we can do another’. It was good communication between both myself and the team to make the right decision to stay out there.”

Gasly did two complete laps on his full wets before returning to the pits for slicks. Including his two pit stops, those four laps cost him 76.9 seconds to Hartley – almost an entire lap.

By this time the initial spell of rain had passed. Shortly afterwards further rain fell. This was the shower which ultimately caught out Sebastian Vettel.

Again Hartley stayed out, this time because the team advised him the conditions were due to clear up. “There was one lap turn two got really wet and I said ‘I think we need to box now’. It was two laps before Vettel went off.

“But the team immediately gave me information that it wasn’t going to get any worse. They said ‘no we’re good to stay out’ so it was good communication all around.

“In the car you can only see so much of the information and you rely heavily on what the team sees coming on the weather radar. A lot of feeling as well.”

However Hartley wasn’t surprised that someone eventually crashed given the conditions. “It was probably only a matter of time until there would be a Safety Car.”

Hartley, a reigning World Endurance Champion, said his experience paid off in the conditions.

“It wasn’t straightforward. I had to use every bit of my experience that I’ve gained over the last years to take the right amount of risk and keep it on the island.

“In the end it worked out and I’m happy with my performance in those conditions and making the right call and putting it all together. Ultimately we didn’t have great pace all weekend so to come out with one point was a really good result.”