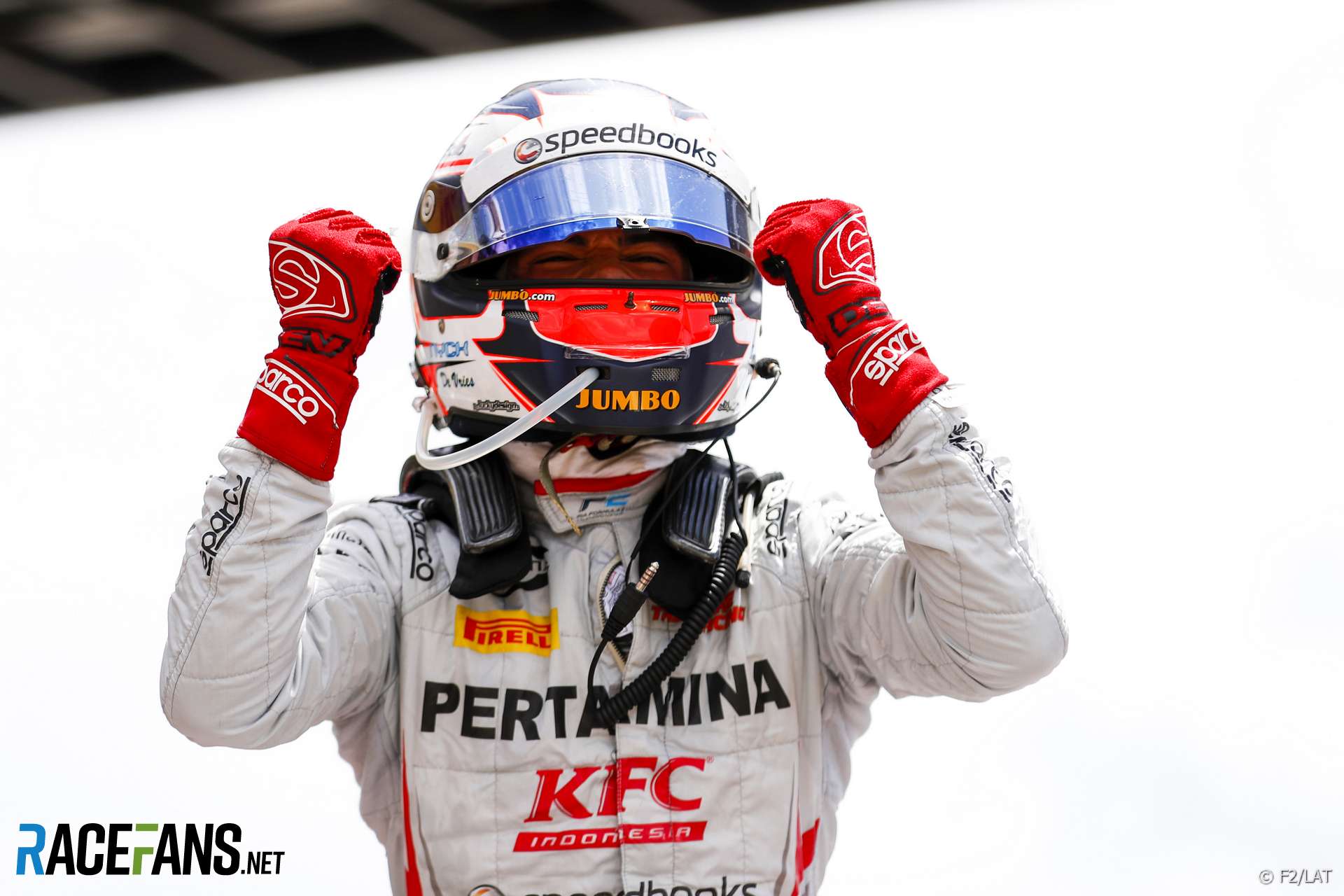 Nyck de Vries took his first victory of 2018 in the Formula Two sprint race at Paul Ricard, looking after his tyres better than his rivals to win by a comfortable margin.

As was the case yesterday the drama started before the lights went out. George Russell – the feature race winner – was pushed off the grid minus a considerable amount of bodywork just before the warm-up lap. Things quickly went from bad to worse for ART as Jack Aitken spun out of an 11th place start on the final corner of the warm-up lap, with the Renault junior stalling and failing to make the grid.

As the lights went out a slow start from pole sitter Tadasuke Makino saw him slip to fifth with Nicholas Latifi flying into an early lead from Louis Deletraz, while Lando Norris jumped from 16th to 9th. Behind them there was further drama as both MP Motorsport cars and Artem Markelov stalled, showing the starting problems with the new cars are still not fixed.

Latifi looked to be struggling up front from the outset as Deletraz hounded the DAMS driver, and his efforts paid off when he managed to dive down the inside of the chicane on the Mistral Straight on lap four to take the lead. Deletraz began to escape up front while Latifi slipped into the clutches of de Vries, losing second place to the Prema driver just two laps later in the same place.

Makino’s race went from bad to worse when he slowed from fifth with mechanical gremlins, while at the same time Norris passed Maximilian Gunther for what was now seventh, having early been forced off track by the Arden driver.

Back up front de Vries was beginning to pile the pressure onto Deletraz with fastest lap and managed to take the lead with a well-executed move around the outside of the Mistral Straight chicane on lap 13, just a lap after Luca Ghiotto had demoted Latifi from the podium at the same corner.

As the race neared its conclusion, Norris closed on his team mate Sergio Sette Camara for sixth, locking up at turn eight on lap 16 and having to weave through the bollards. He managed to get further alongside the following lap however and took the inside line, with the Carlin team mates going wheel-to-wheel through the chicane and down the second half of the Mistral Straight, before Norris took the position into turn ten.

On the penultimate lap Antonio Fuoco eased past a struggling Latifi for fourth with Norris following him through a few corners later, but Latifi misjudged his braking into turn one and hit Norris, breaking his own front wing. He slipped to eighth by the chequered flag, but cut most of the final lap as he struggled to keep his damaged car on track.

There were no such dramas for de Vries however who took a comfortable win up front ahead of Deletraz and Ghiotto, with Fuoco fourth from Norris – who gained 11 places in the race – while Sette Camara and Alexander Albon demoted Latifi on the final tour.