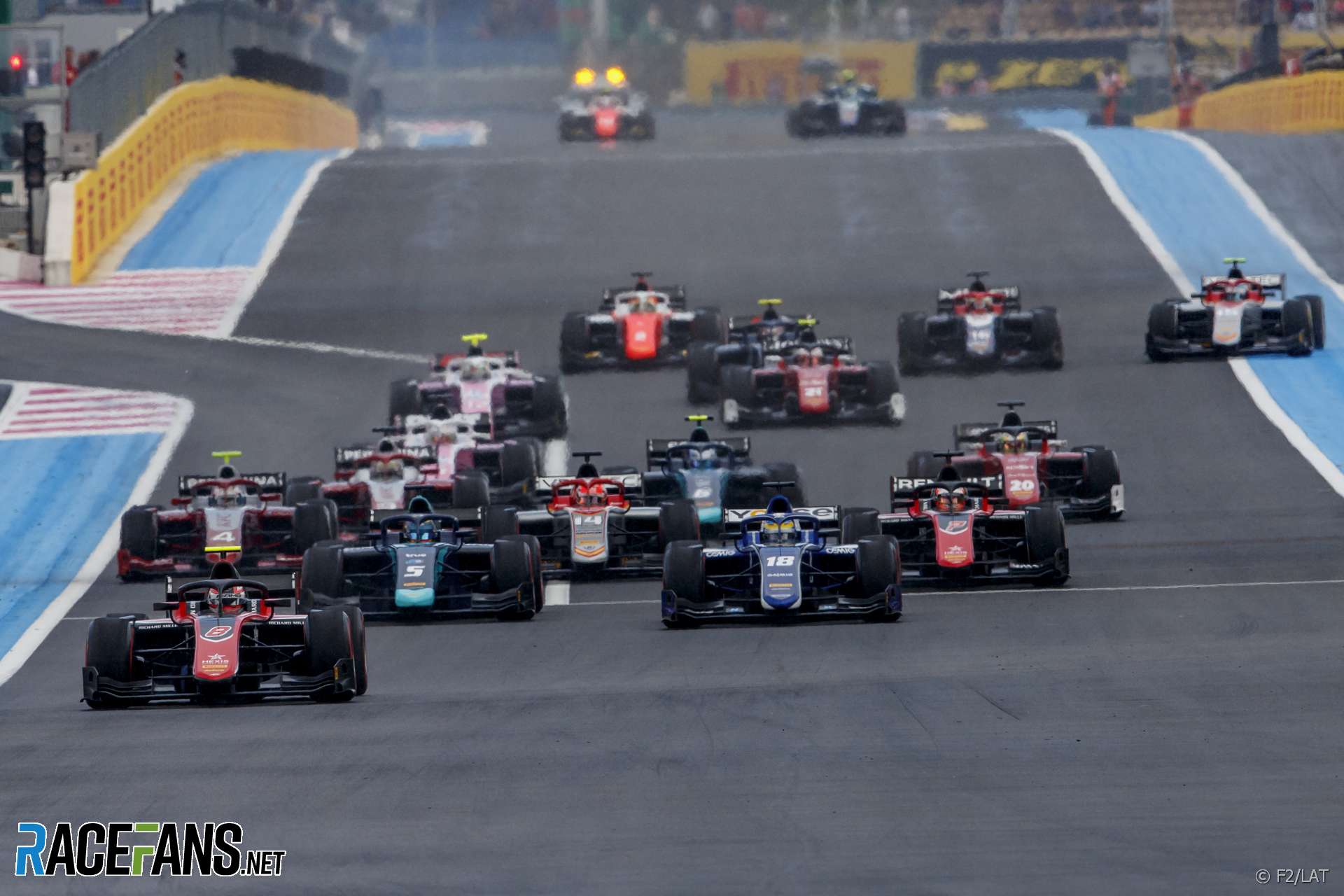 George Russell won the Formula 2 feature race in France, holding off a late challenge from Sergio Sette Camara as the pair scorched away from the field in an early rain shower.

Rain started to fall on the warm-up lap and the drama began as the lights went out, with championship leader Lando Norris stalling from fourth on the grid, while team mate Sette Camara shot from fourth to second. Further around the lap Luca Ghiotto span on the mistral straight from fourth place but up front Russell began to stretch his legs.

The rain continued to fall in the opening laps and Russell opened his advantage to 4.5 seconds over Sette Camara, 8 seconds to Alexander Albon in third and 15 seconds back to team mate Jack Aitken in fourth over just five laps. Behind Aitken, Antonio Fuoco had to serve a stop/go penalty for having a mechanic on the grid when the formation lap got underway.

As the rain got heavier still, Aitken and Roy Nissany became the first drivers to pit for wet tyres. Norris followed them in a couple of laps later as the conditions remained tricky on track. Ghiotto span again on the Mistral straight having recovered to eighth, while Sean Gelael span from sixth and stalled, triggering a Virtual Safety Car period.

As quickly as it arrived the rain abated, and Norris was forced to pit again on lap ten to switch back to slicks, ruining any hope of recovering time following his stall at the start and consigning him to a 17th place finish, the last of the runners. Russell and Sette Camara continued to lead up front having opened a considerable gap in the rain, with Albon pitting from third on lap eleven, and rejoining sixth.

The virtual safety car was deployed again on lap thirteen when Ralph Boschungs race came to an end on the pit straight as his car gave up, with Sette Camara benefiting by closing the gap to Russell to just 2.5 seconds. Behind them Albon slowed with a replication of the engine problem he suffered in practice, and was forced to retire from what looked set to be a net third place.

Sette Camara was the first of the top two to pit on lap 17 with Russell following him in on the next tour, the Carlin driver reducing the gap to just 1.6 seconds. Nyck de Vries ran the contra-strategy and pitted on 24 to switch to the super-softs. He rejoined sixth and breezed past Fuoco to take fifth at the final corner, but the tyres quickly went off and he slipped back to sixth by the end.

Up front Sette Camara was putting Russell under heavy pressure in the closing laps, despite locking up and going straight on at the Mistral chicane. He lunged at the final corner but was too far behind and Russell held on for a great win ahead of the Carlin driver, with Roberto Merhi taking a surprise third, albeit half a minute behind. Ghiotto recovered to fourth ahead of Fuoco, de Vries, Louis Deletraz, Nicholas Latifi – who takes reverse grid pole for Sunday’s race – Tadasuke Makino and Nirei Fukuzumi.

Update: Following the race Merhi was disqualified after all four of his tyres were found to be below the minimum tyre pressure limit specified by Pirelli. Ghiotto is therefore promoted to third, Arjun Maini moves up to 10th place and receives a point. Makino moves up to eighth in the classification and therefore takes pole position for the sprint race.

4 comments on “Russell triumphs as rain creates drama in F2”