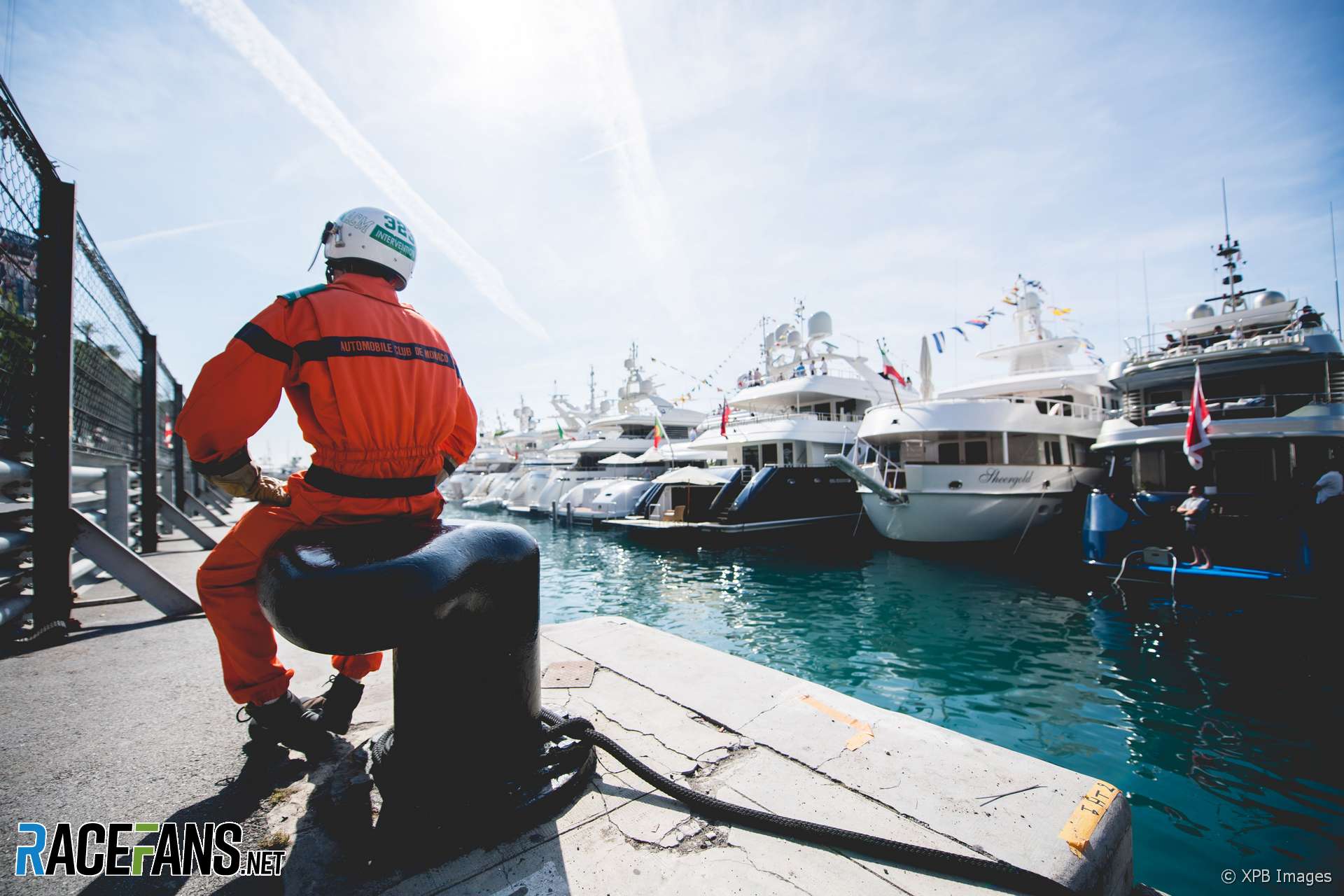 Thursday was the first day of track action in Monaco. For @DieterRencken it was also an opportunity to grill the team bosses on the day’s pressing matters before enjoying a bit of Red Bull hospitality.

It seems strange to prepare for track activities on a Thursday, but this is Monaco weekend, so everything and anything is kind of topsy-turvy, particularly as this year’s race is not scheduled for the traditional Ascension Day weekend due to later Easter festivities.

A minor point, you may believe – save that today is a normal working day, so business traffic mixes it with race goers. Factor in that it marks the second day of French Rail’s two-day strike, and you’ll understand why the first 30-odd kilometres from Menton – the last town before the French-Italian border, where I elect to stay during race weekend due to affordability – took 25 minutes, and the final two kilometres over double that.

I’d planned to be in situ by 0900 but delays mean I’m at my desk in the Media Centre overlooking Tabac almost an hour later. Still, Liberty Media’s decision to shift the weekend timetable by an hour means I don’t miss a thing.

I sign for my FanVision handheld device – on loan for the year after the company’s return to F1 – and set about navigating its various menus. We’ll publish a full product review once I’m totally au fait with the device, which is about the size of an iPhone Plus.

The later start to the first day’s proceedings necessitates a shift to 1pm local time for the FIA ‘Friday’ press conference – traditionally attended by team principals or other senior team personnel. I took advantage of the opportunity to follow up with McLaren Group CEO Zak Brown on the story we broke last Saturday and it was rather satisfying to be given recognitionfor revealing the Latifi investment:

Q: (Dieter Rencken – Racing Lines, Racefans.net) Zak, with reference to Michael Latifi, you called it exceedingly good news, or very good news – yet your group kept his identity hidden behind a BVI – British Virgin Islands – entity until we revealed it. Is that sort of opacity any good for a company like McLaren? And second, after his investment, what is the shareholder breakdown now of the Group please?

ZB: Shareholder breakdown is, I believe, published, so anyone that’s interested in that can look that up accordingly. And any time you have, whether it’s a sponsor announcement, a driver announcement, an investor announcement, you have a time in place in which you hope to announce that and you did a good job in getting ahead of that story. So that news was going to come out in due course. We chose to accelerate that news after the word got out.

Also in the conference, Christian Horner’s confirmation that Liberty will take the next step in its negotiations with teams over F1’s post-2020 landscape on Friday suggests I’ll be doing a lot of digging during the weekend.

After the presser it’s time to grab a (late-ish) lunch at Mercedes – Thai beef salad, cold meats and cheese, followed by diced fruit and lemon tart.

The day’s round of media scrums starts, with the most enjoyable session being that with Andrew Green, Force India’s Technical Director, who invariably throws some left-field balls into discussions. That sort of thinking has enabled the team to punch well above its financial weight.

Duties done, I head for Red Bull’s Energy Station – floating palace would be a more fitting moniker – with wife Gabi, also known to you as RaceFans contributor @GabrieleKoslowski – for Red Bull’s annual media party. As always, the hospitality is absolutely top drawer, the music loud, the company great and spread to die for. Just as attending the Monaco Grand Prix should be on every race fan’s bucket list, so should a visit to the Energy Station.

The Energy Station, built for just one weekend per year, stands as a superb testament to the company’s commitment to F1. It weighs over 800 tons, is manned by a staff of 120 – even temporary staff such as cleaners are in corporate-wear, albeit ‘utilitarian’ versions – and takes 21 days to construct every year in Imperia up the Italian coast.

Disassembly takes the same again, and then it’s is stored for 10 months until the next race. This video reveals the full extent of the Energy Station (as it’s produced by FOM we can’t embed it here.)

You can watch the process of setting up the Energy Station here:

Return to Menton. Thankfully the trip takes but half an hour. The roads are absolutely deserted, which provides food for thought: is Monaco gradually losing its lustre?