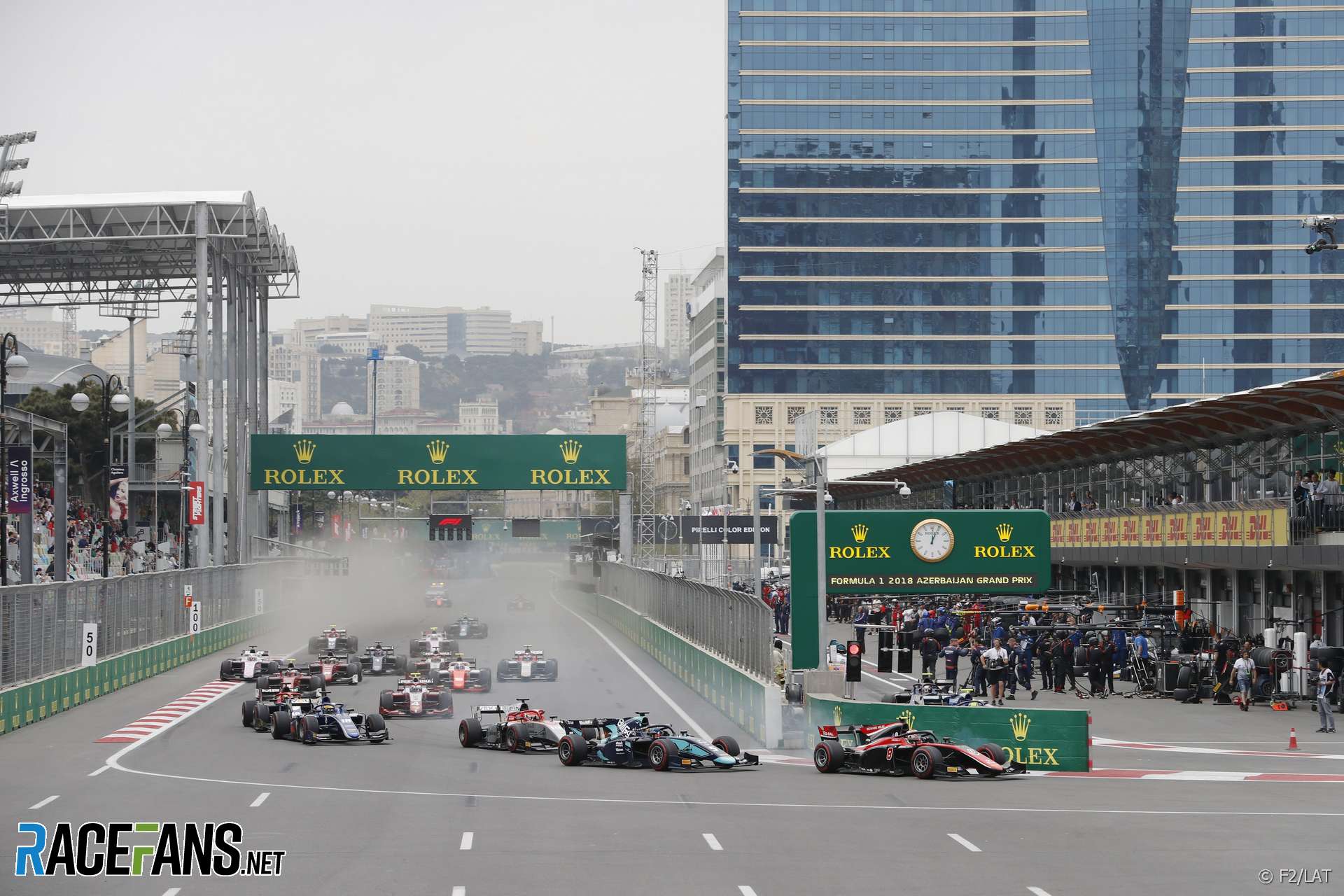 Alexander Albon won the Formula Two feature race in Azerbaijan from pole position. But if that made the DAMS driver’s victory sound straightforward, in reality it was anything but.

The drama began before the lights went out as championship leader Lando Norris, second on the grid, stalled on the formation lap and was forced to start from the pit lane. At the race started Jack Aitken stalled too, but up front his team mate George Russell got a flying start from third and used the gap left by Norris to dive up the inside of Albon to take the lead.

The long run to turn three allowed Albon to use the slipstream to take the lead back at the corner, but the racing action didn’t last long as on the exit of turn 16, Luca Ghiotto ran too high over the kerb and spun into the inside wall, bringing the safety car out.

The race restarted on lap five with Russell getting a run down the main straight and again into turn 3, but Albon defended well to keep the lead, while Russell pitted at the end of lap six. A strong run from Arjun Maini ended when his car slowed from fifth, while Maximilian Gunther – who had pitted at the end of the opening lap with a puncture – also retired when he pulled off down a slip road.

Albon pitted the following lap but was held in his box to allow traffic past, with the delay handing Russell the net lead, and also allowing de Vries to jump into second. Albon lost yet another place when Roy Nissany pitted from the lead and rejoined in third, the Campos driver putting in an excellent showing.

Sadly it wasn’t to last however. He lost third and fourth to Albon and Antonio Fuoco and hit the wall a few laps later, bringing about a second safety car and costing Russell the large advantage he had built up front.

The restart was good from the Mercedes junior and de Vries initially thought against making the move but left his braking too late and threw his Prema to the inside of Russell, who was already running wide himself. de Vries forced both cars off track while Markelov followed them behind in sympathy, and with Albon also running wide from third, Fuoco found himself leading having crossed the line in fourth place.

The drama wasn’t finished there however as on lap 24 Markelov’s engine failed in spectacular style just before the castle section, but the Bahrain sprint race winner continued on around half the lap leaving a thick fog of smoke. Fuoco’s cautious driving allowed Albon to close the lead he had build, and the pole sitter retook the lead on lap 25, with Fuoco further losing second to Aitken on the penultimate tour.

It was therefore Albon who took the victory ahead of a stunning drive from pit lane to podium to Aitken, with Fuoco rounding out the top three. Sergio Sette Camara held fourth ahead of Nicholas Latifi and his team mate Norris, with Ralph Boschung seventh and former F1 driver Roberto Merhi eighth, and starting on reverse grid pole for the sprint race tomorrow. Tadasuke Makino and Sean Gelael completed the top ten.