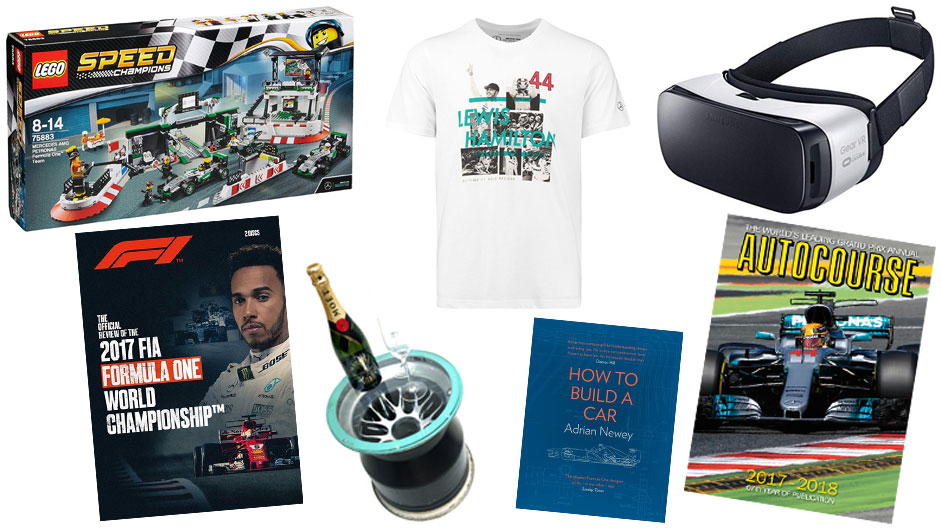 Still looking for present ideas for a Formula One fan in your life? F1 Fanatic has ten top recommendations plus dozens more suggestions besides.

How to Build an F1 Car by Adrian Newey The man who designed more world-beating Formula One cars than anyone else over the past two-and-a-half decades has finally put pen to paper. Adrian Newey’s revealing and witty memoir is the best new F1 book to hit the shelves in 2017. Don’t miss it.

The Mechanic by Marc Priestley In contrast former McLaren mechanic Marc Priestley’s recollection of his time in F1 is a spikier affair which gives a warts-an-all account of Formula One’s behind-the-scenes extremes.

Already got these on your shelves? Here’s a few more of the new books which arrived in the past 12 months. F1 2017 is the first official Formula One game to receive five out of five from F1 Fanatic since Codemasters took over the franchise in 2009. Read why below. While F1 2017 lets you drive the cars, in Motorsport Manager you can do everything else. The team behind it have painstakingly created a rich, constantly evolving, F1-style world for its management simulation. The game appeared late in 2016 so it’s still worth considering as a less expensive option for Formula One game fans.

It doesn’t hit the shelves until next week and review copies haven’t appeared yet. But expect the usual exhaustive account of the year and the pick of the very best F1 footage.

Want a review of an earlier season? Here’s F1 Fanatic’s verdict on the best of the rest: The ultimate annual for motorsport fans includes detailed accounts of all 20 F1 races plus reviews of all the major international and national four-wheeled racing series. This officially licensed Lego set is features a Mercedes W07 each for Lewis Hamilton and Nico Rosberg plus a grandstand, pit garage, pit wall, television camera and loads more. The 160 wheel rims each Formula One team gets through every race weekend is just one example of the vast amount of material the teams generate during a season. But ever more of this hardware is finding its way into our living rooms thanks to the team at Memento Exclusives and their imaginative range of items made from race-used ex-F1 car parts. As well as clinching his fourth world championship, Lewis Hamilton broke an all-time Formula One record this year by surpassing Michael Schumacher’s achievement of setting the most pole positions. Mercedes has produced a special T-shirt to commemorate the achievement.

The usual vast range of merchandise is available from all the teams. And you should be able to pick up some deals on the last of the McLaren-Honda kit. Or get set for 2018 with the first ‘Halo’ F1 car models.

Virtual reality is everywhere and 2018 looks set to be the year Formula One embraces 360-degree video. The first tests of the technology including on-car cameras have already been completed.

A a virtual reality headset isn’t essential to enjoy the footage, but it’s a great way to experience the unique perspective it gives. Google’s ultra-cheap Cardboard offering offers the easiest way into trying out the technology – just slot your phone in and go.

Got any more festive F1 gift ideas? What’s on your wish list?