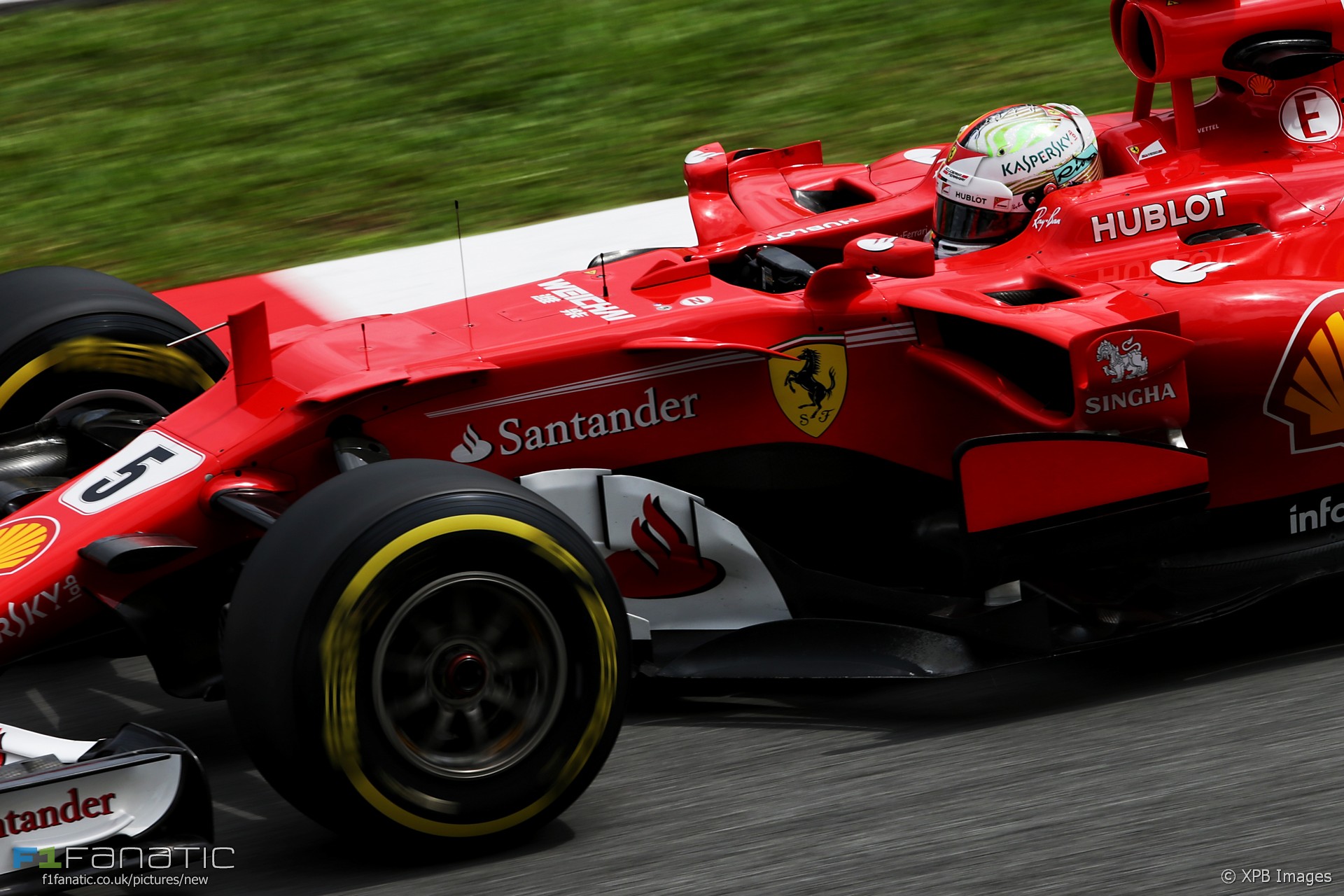 A furious Sebastian Vettel lashed out on the radio after colliding with Lance Stroll after the end of the Malaysian Grand Prix.

Here’s what the drivers had to say on the radios during the Malaysian Grand Prix.

Kimi Raikkonen had qualified on the front row but he wasn’t even able to start the race after another power unit problem.

Raikkonen: “I have no power.”
“Understood Kimi can you get around to the grid, we’ll try to fix the issue on the grid.”

Soon after the start Max Verstappen closed on Lewis Hamilton and passed him for the lead of the race.

Grosjean: “The Toro Rosso’s moving all over the [censored by FOM] place.”
“Understood”
Grosjean: “Those new guys need to learn they can’t move like this.”

Hulkenberg: “I’ve lost power. Got a ‘cool the car’ message.”

To Ricciardo: “Last lap you took one second out of Hamilton. Nice job.”

Vettel had started from last on the grid but Mercedes weren’t taking anything for granted.

To Hamilton: “Vettel in P9, 22 seconds behind. Just remember he may be a threat towards the end of the race.”

To Perez: “If understeer five and six is a problem you could try open diff.”

To Vandoorne: “That’s a Sauber in front let’s go straight through him.”

Perez: “Tyres is good, no rush to pit.”
“Understood, Vettel behind.”

To Ocon: “When you come up to Sainz use both straights to go by. Use the first straight to catch him up, use the second to go by.”

To Sainz: “Keep pushing Carlos. You are doing a fantastic job. You are catching Fernando in front.”

“Feedback on the tyres, let us know your tag level.”
Hamilton: “Tag three, tyres are OK.”

Verstappen: “Front left is a bit dated.”
“Front-left tyre is a bit limited. Understand the balance issue but no problem at this stage.”

Fernando Alonso was unimpressed by Kevin Magnussen, who squeezed him hard as the McLaren driver went past. But Vettel wasn’t too happy with Alonso after the McLaren driver held him up. And Magnussen was frustrated with Jolyon Palmer, who spun into the side of him.

Alonso: “What an idiot! Hulkenberg is right…”

To Gasly: “Stop lifting off, maximum attack on Magnussen.”

Magnussen: “What a [censored by FOM] lunatic.”
“Everything OK with the car?”
Magnussen: “Yeah.”

Vettel: “Hey what a… Come on, Alonso. Really? I thought you were better than that.”

Gasly: “I’m struggling with the rear.”
“Other people are struggling more than us. Good job keep pushing.”

Verstappen took the win but Vettel let rip after tangling with Stroll.

Vettel: “…is that possible? Stroll is not looking where he’s going. He completely shunted into my car. I mean seriously.”

Stroll: “Vettel just ran right into the side of me.”

The full race radio transcript will be published later this week.

26 comments on ““What a bunch of idiots”: 2017 Malaysian GP team radio highlights”