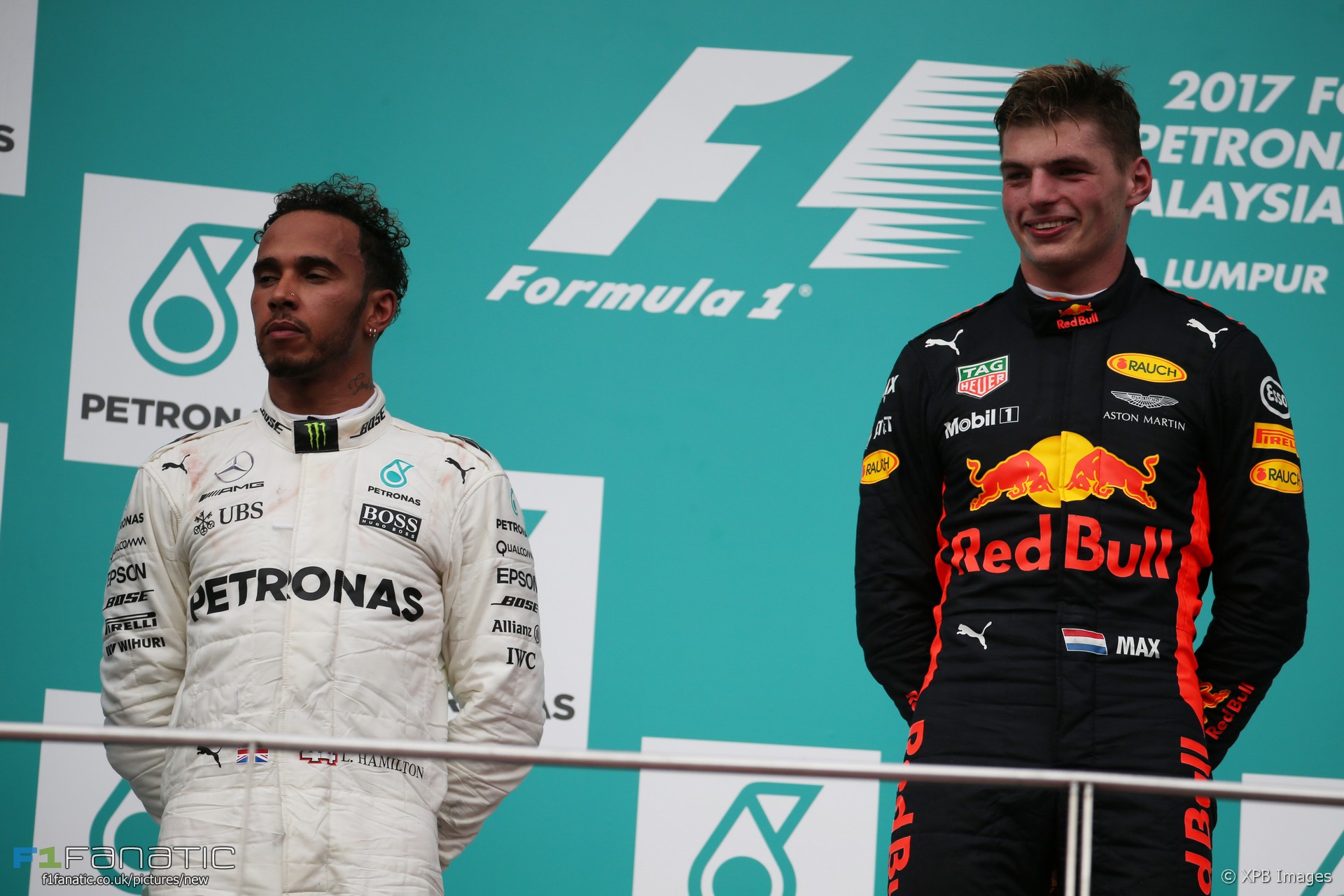 This was Ferrari’s race. At least, it should have been.

The SF70Hs loved Sepang. Red Bull’s RB13 was at home in the winding middle sector. Mercedes’ W08, back in full ‘diva’ mode, made up for lost time on the straights. But Ferrari’s all-rounder was in its element.

And yet Ferrari contrived to get neither of its drivers onto the podium. It wasn’t as total a disaster as the great Singapore wipe-out of 2017, but it marked another missed opportunity for the team and another blow for Sebastian Vettel’s championship hopes.

Vettel’s power unit failure in qualifying consigned him to starting from last position. That at least afforded him the opportunity to fit a full replacement of his hardware for the races ahead without being put at a further disadvantage.

Kimi Raikkonen had a quick enough car for pole position but slipped up at the final corner which meant he started second alongside a surprised Lewis Hamilton, who’d been 1.4 seconds off the pace on Friday.

Raikkonen said his immediately for the race was to “try to get further than 100 metres”. He didn’t even make it that far. Another power unit problem struck on his reconnaissance lap and minutes before the start his car was wheeled off the grid. That left Hamilton alone on the front row with the two Red Bulls closest to him.

Verstappen risks a move for the lead

The remnants of another Sepang downpour were still evaporating from the track surface as the drivers assembled on the grid. Several teams took steps to dry the racing line in front of their cars, but Force India did not and subsequently claimed their rivals had broken the rules. That left their drivers at a disadvantage.

The Mercedes pair got away quickly. Hamilton kept his lead and Valtteri Bottas went to work on the Red Bulls. He used the outside line to work his way around Daniel Ricciardo and applied brief pressure to Max Verstappen as well before settling into third place. So far so normal.

But within a few corners the race pace disadvantage which Mercedes had predicted manifested itself. Hamilton’s lead never got above a second. As lap four began Verstappen maxed out his energy recovery system on the straight and fired his Red Bull down the inside at turn one, betting that Hamilton would have one eye on the championship and let him go.

He did. “Maybe I look a bit of extra risk,” said Verstappen afterwards, “but it was my only chance.” Verstappen had correctly sussed that Hamilton was experiencing ‘de-rates’ on his power unit. “That was one of the laps I could see he was clipping a bit more than I was, so I used the battery I had.”

Bottas was struggling more than Hamilton, losing up to a second per lap compared to his team mate at times, yet it took Ricciardo longer to find a way past him. When the pass finally came it followed three corners of superb dicing between the pair. Bottas eventually left Ricciardo the inside line at turn four and the Red Bull was through. Ricciardo immediately began cutting half a second per lap and more out of the gap to Hamilton.

Vettel races into the top five

While all this was going on Vettel was making up for lost time. He out-accelerated the Saubers on the run to turn one and then began picking off the stragglers with ease. He was 13th by the end of lap one, then took Nico Hulkenberg after the Renault had been forced onto the grass by Felipe Massa.

Hulkenberg was unhappy with the balance of his car after his grassy moment and made an early pit stop which played into Vettel’s hands beautifully. Once he’d picked off Fernando Alonso the Ferrari appeared behind a series of cars which all pitted in turn to cover Hulkenberg: Kevin Magnussen, Massa, Lance Stroll and finally his team mate Stoffel Vandoorne.

This promoted Vettel to sixth, which became fifth once he caught and passed Sergio Perez with ease. “That was not really my fight,” admitted Perez after the race.

Hamilton could do no more than watch the Red Bull ahead of him get smaller and the one behind him get bigger. “On circuits like this there are corners that really magnify the issues we have with the car,” he explained. As half-distance approached Verstappen’s lead grew to eight seconds while Ricciardo closed to within four seconds of Hamilton.

At this point Ricciardo was getting more out of his worn super-soft tyres than his team mate. The longer the first stint went on the better Ricciardo’s situation became. And with the front-runners on the look-out for one of Sepang’s sudden showers, they had good cause to leave their drivers out.

Mercedes weren’t prepared to risk Hamilton getting jumped, however. They brought him in on lap 27 and he returned to the pits immediately two seconds faster. Verstappen responded with his own pit stop the next time around but Red Bull left Ricciardo out for two further laps before bringing him in.

Vettel had caught Bottas before the pit stops and soon began losing time behind the Mercedes. Having started the race on the harder soft tyres Vettel potentially stood to gain an advantage if he ran longer. But he would need to pass the Mercedes on the track, and the only use Bottas could serve Mercedes at this point was to remain out and hold up the only Ferrari left in the race.

Ferrari therefore sacrificed Vettel’s tyre advantage and brought him in to ‘undercut’ Bottas. His performance edge was so great that he soon began hauling in Hamilton and Ricciardo at a second per lap or more. Had Vettel started from the pole position he probably would have taken with a working car on Saturday, the others wouldn’t have stood a chance.

By lap 48 Vettel was on Ricciardo’s tail. They caught Alonso, who took the trouble of letting Ricciardo by at turn one and waiting until the exit of four to let Vettel by. “I thought you were better than that,” chided Vettel on the radio as he lost six-tenths of the 14 seconds he’d taken out of Ricciardo since his pit stop.

The next time around Vettel stalked Ricciardo into turn one, the Red Bull driver eyeing his mirrors closely as he edged off-line to hold the Ferrari up. That seemed to break Vettel’s charge as over the final few laps he backed off considerably. That set the finishing order for the top five, Verstappen leading home Hamilton, Ricciardo, Vettel and a distant Bottas.

Despite carrying a stomach infection which had been severe enough to put him on an intravenous drip at one point during the weekend, Perez brought his Force India home first in the ‘B’ class, and the only other driver to complete the race distance.

Esteban Ocon had accused his team mate of causing him to collide with Massa at turn two on the first lap but a greater portion of the blame belonged with the Williams driver. Having started superbly from 11th with the benefit of new tyres Massa’s line through the corner failed to account for the fact he had two cars on his inside instead of one.

The contact left Massa with floor damage and Ocon with a puncture which sent him into the pits on lap two. He then completed the rest of his race – 53 laps – on a single set of soft tyres. Ocon continued his run of finishing races in the points despite also being knocked into a spin at one stage by Carlos Sainz Jnr. The stewards, who seemed in docile mood, chose not to get involved in this or any of the day’s other incidents.

Between the two Force Indias came Vandoorne, who’d been in great form all weekend, and brilliantly exploited from an ill-timed team orders call at Williams to pass both their cars. Massa followed Stroll home.

The younger Williams driver was then involved in one of the season’s most bizarre incidents. Having been lapped by Verstappen, Stroll took the chequered flag before Vettel. The Ferrari driver was in the process of sweeping around him at turn six when the pair made contact, ripping the left-rear wheel from Vettel’s Ferrari.

“Sebastian came flying by me, pushing round the outside like the race was still on,” said Stroll afterwards. Vettel laid the blame at his rival’s feet. Again both were cleared, but it remains to be seen whether the incident will require Vettel to use a new gearbox at Suzuka, which would mean a five-place grid penalty.

Alonso finished one place outside the points and ahead of Magnussen. The Haas driver tried hard to resist Alonso at turn one, but to no avail. “What an idiot,” Alonso remarked on the radio. “Hulkenberg is right,” he added, referring to the Renault driver’s disparaging assessment of Magnussen’s driving in Hungary.

The only driver to join Raikkonen in retirement was Sainz, whose Toro Rosso was running in the points when its electrics died. His new team mate Pierre Gasly took the chequered flag in 14th place. He was passed by Grosjean with two laps to go, though the Haas driver had the twin advantage of fresher tyres and, unlike Gasly, a working drinks bottle.

‘It had been a season to forget’

For the second time in as many races, Vettel had missed a clear opportunity to reduce Hamilton’s lead. Unlike in Singapore, this one had been out of his control, though that was little consolation.

It was a bittersweet day for Hamilton, however. While he extended his championship lead to 34 points the alarming lack of pace exhibited by his Mercedes will be a cause for concern.

For Verstappen, however, victory was both joy and relief. After being taken out at the start in Singapore he had played down Red Bull’s chances of winning again in 2017.

As was the case with his team mate’s victory in Malaysia 12 months earlier, Verstappen’s win came after a season of some frustrations. And in a happy coincidence, the second win of his career came in the first race after his 20th birthday on Saturday.

“It’s been a dramatic season so far so of course I’m very happy to win this race,” he said. “Hopefully from now onwards it will be OK. I’m not saying we’re going to win every race but at least score some good points.”

“Up until now, it was really a season to forget.”

45 comments on “Verstappen wins on another bad weekend for Ferrari”