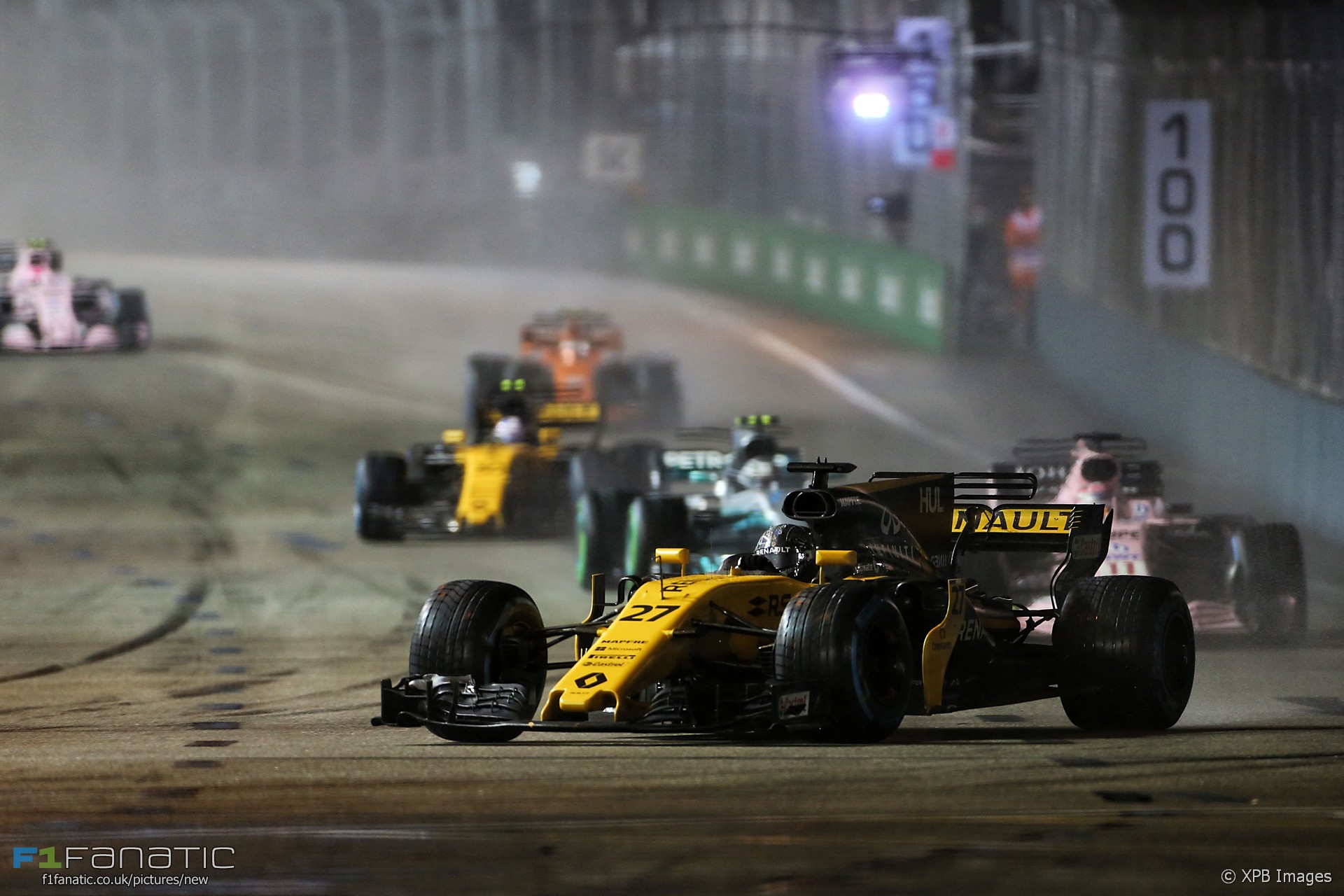 We were denied a potentially great storyline on Sunday when Hulkenberg’s Renault power unit let him down. He’d already beaten the flying McLarens to the ‘best of the rest’ spot on Saturday, then taken advantage of the carnage at the start to rise to third. In the race where everyone expected him to set a new record for most starts without a podium finish, was he finally going to reach the rostrum?

Renault’s poor pace on the intermediates had necessitated a start on full wet weather tyres which meant Hulkenberg needed an early pit stop which dropped him back. Even so he was holding fourth, pursuing Bottas, when his power unit began playing up. He deserved more.

Sainz inherited the fourth place Hulkenberg vacated but saying that is no disrespect to the Toro Rosso driver who had gambled on starting the race on intermediate tyres. As the track began to dry he made his way past drivers who were beginning to struggle on full wets, and ran a single stint on super-softs to take the chequered flag in a career-best fourth place. A very timely result given the announcement of his forthcoming promotion to Renault.

Mercedes arrived in Singapore knowing the track wouldn’t suit their car. Yet it was hard to argue Hamilton didn’t do the best with what he had: He was consistently quicker than Valtteri Bottas, to the tune of almost seven-tenths of a second in qualifying.

On race day the rain fell, Sebastian Vettel went out and Hamilton seized the initiative. He was lucky, but he also drove superbly, clearly revelling in the tricky conditions. Afterwards Daniel Ricciardo admitted he had the speed to beat Bottas but not the other Mercedes, which never put a wheel wrong in treacherous conditions.

“Not bad for the team but a disaster for me,” was Massa’s honest assessment of his Singapore Grand Prix. Starting on the wet tyres was an error and failing to pit during the second Safety Car period for intermediates made things worse. He tried to rectify that with an early switch to slicks but was still over half a minute behind when the Safety Car appeared for the final time. The only car running behind him at the flag was Pascal Wehrlein’s Sauber.

Once again there was a stark contrast between the two Toro Rosso drivers. While Sainz capitalised on exactly the kind of opportunity to team needs to score big points, Kvyat stuffed his car into a wall.

The stewards correctly ruled the first-lap crash a racing incident, though under the circumstances Vettel’s decision to squeeze Verstappen as hard as he did was risky. Kimi Raikkonen and Fernando Alonso were both unrewarded for making excellent starts.

According to Ricciardo it was a set-up choice rather than his gearbox glitch that blunted his competitiveness as he was forced to settle for a third consecutive second place in Singapore. He still led home an out-of-sorts Bottas who didn’t seem comfortably in the Mercedes whether the track was wet or dry.

In Italy Esteban Ocon led the way for Force India, this time it was Sergio Perez’s turn. He took a fine fifth, well away from his team mate, no doubt to the relief of the pit wall.

Amid widespread speculation about his future Jolyon Palmer delivered a career-best sixth place which included an opportunistic pass on Bottas on the way. He wasn’t at Hulkenberg’s level in qualifying or the race, but as in Belgium this signalled he’s raised his game since the summer break. Stoffel Vandoorne also grabbed a personal best with seventh and his fastest lap time was the same as Palmer’s.

On his Singapore debut, Lance Stroll coped with the conditions better than his more experienced team mate did to claim eighth. Romain Grosjean once again had a troubled practice but delivered points on race day. His team mate Kevin Magnussen was ill-rewarded after being the first driver to try slicks: first he had to wave Grosjean through, then his power unit failed. Massa and Wehrlein were the only other finishers.

Vote for the driver who impressed you most last weekend and find out whether other F1 Fanatics share your view here: