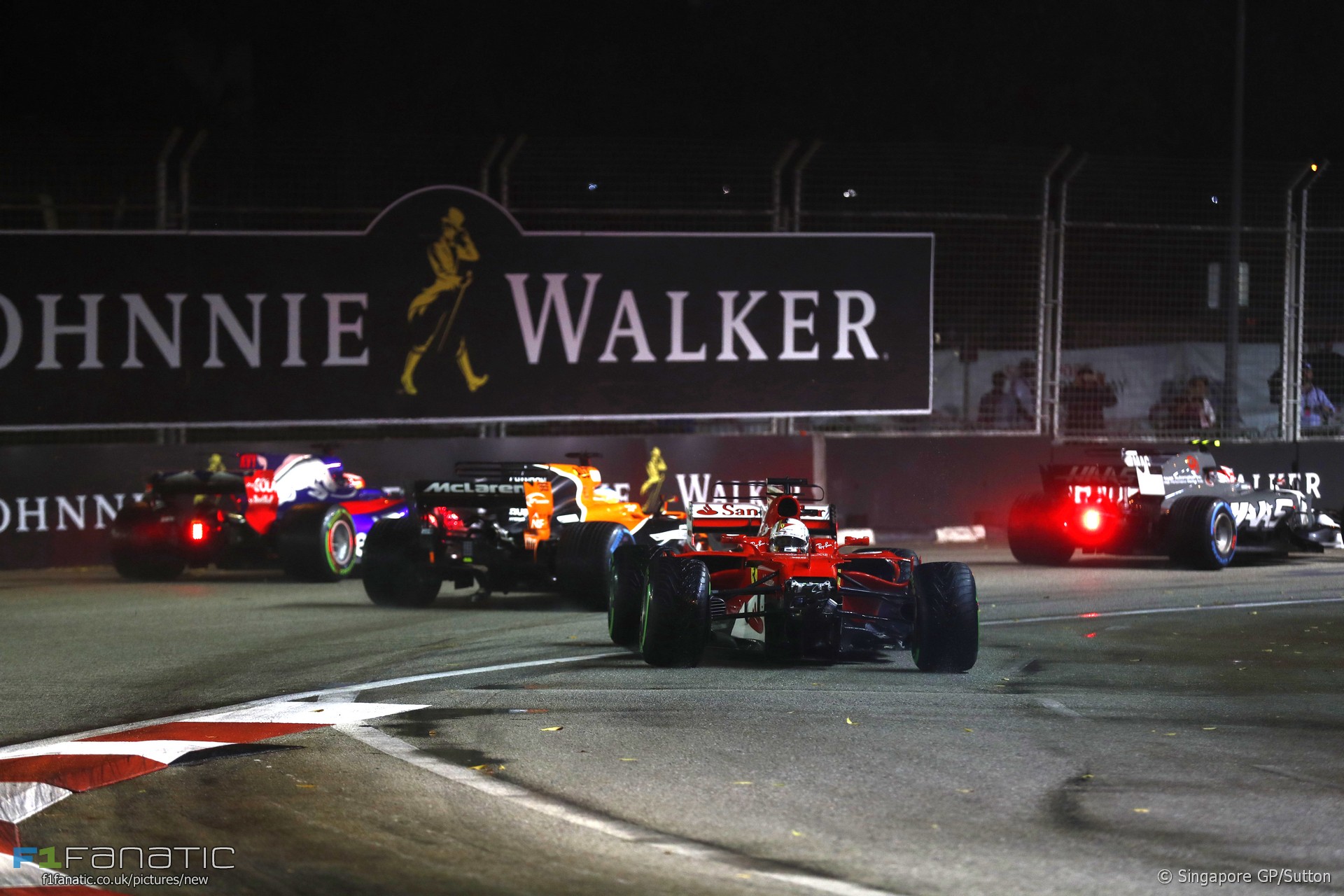 Sebastian Vettel apologised to his team on the radio after the crash which eliminated him and team mate Kimi Raikkonen from the Singapore Grand Prix. Here’s what the drivers had to say during Sunday’s race.

Despite heavy rain falling in the minutes before the formation lap, the race began with a standing start.

To Ericsson: “The rain we see now will last for half an hour.”

To Ericsson: “Safety Car lights are not on so we expect a conventional start for now.”

On Ericsson’s radio: “Can you confirm that the track condition is everywhere on the grid, the rain?”
“Yes, and it’s getting stronger.”

On the formation lap those near that back of the grid warned visibility was poor.

To Hamilton: “All cars ahead on the inter.”

Grosjean: “Mate the visibility is terrible back there.”
“OK we’re keeping an eye on it.”

Alonso: “I have been hit massively, I don’t know the car condition.”

Lewis Hamilton took the lead but Daniel Ricciardo was in pursuit.

Alonso: “The car in front of us is a Haas and they don’t have the rear light flashing. It’s a bit dangerous with the visibility.”

Ricciardo: “Is the rain still falling?”
“Yes, but it’s reducing in intensity.”

To Ricciardo: “Hamilton could be getting issues on his front inters so watch your fronts.”

To Alonso: “We need to retire the car, bring it back to the pits.”

Daniil Kvyat brought the Safety Car out again after hitting the wall.

Hamilton: “Has everyone pitted except me? Think that was a mistake.”
“They’d’ve done the opposite to us, Lewis. We’d be P2.”
Hamilton: “On these new tyres he’s going to have a lot more pace than me now I imagine.”

Ricciardo wanted to pit for slicks but had to wait until a window of opportunity opened up behind him.

Hamilton: “This track is drying so slow.”

“How far away from dry tyres?”
Ricciardo: “Still greasy, not ready yet.”

To Ricciardo: “Looks like his warm-up wasn’t very good. One-and-a-half seconds faster than him in the last two sectors.”

The Safety Car came out for a third time after Marcus Ericsson crashed, allowing Ricciardo to close on Hamilton again.

Hamilton: “Why another Safety Car? Surely VSC would work.”

To Ricciardo: “So there is now a crane on the track on the bridge. I’ll keep you updated.”

To Hamilton: “We recommend tag mode one. We want to keep the field compressed. Don’t want to give anyone a free stop if a Safety Car comes.”

Hamilton: “Something flapping on my left-front tyre.”
“We don’t see anything on vibration metrics.”
Hamilton: “It’s red.”

To Ricciardo: “Remember to breathe and drink.”

“Get in there, Lewis. What an awesome drive, mate. What an awesome drive. Absolutely stellar result. Can’t wish for better than that.”
Hamilton: “Guys, what can I say? What a turnaround today. Fantastic job with the strategy.Thank you so much for all the hard work and continuing to believe in me. What a great day.”

The full race radio transcript will be published later this week.