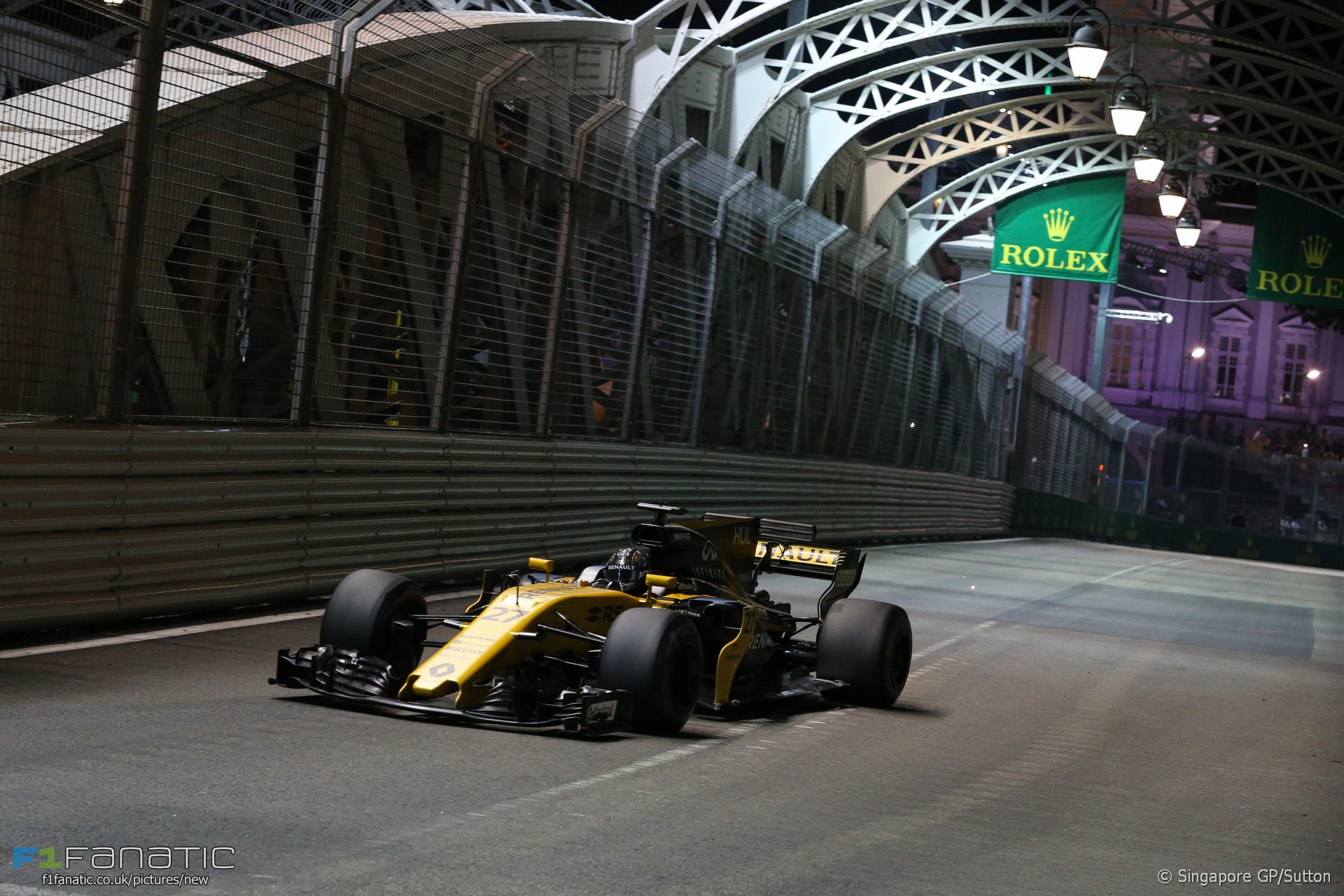 Nico Hulkenberg was especially satisfied to out-qualify both the McLaren drivers in Singapore. Here’s what he and the others had to say on the radio during qualifying.

To Hamilton: “So biggest was just grabbing a wheel into 16 and losing time through 17.”

Grosjean: “OK just check the rear-right.”
“We’re checking it now. You can use K2 plus and spark one for the next lap. Loads suspension OK so that was OK on that touch. We’re watching the pressures.”
Grosjean: “I don’t know why but car felt pretty good.”

Kvyat: “Last sector is OK but I’m not too confident. It seems the oil is not only there. It’s everywhere in the last sector.”

Massa: “Hit the wall, I have a puncture.”

Massa: “Oh my god I got a complete oversteer in the last corner, [censored by FOM].”
“Yep.”

To Alonso: “We’re safely through that lap. P3. We did definitely need that, the previous lap wouldn’t have got us through.”

“How is the balance, Esteban?”
Ocon: “Balance is about the same as before. A bit improved.”

Neither Force India driver made it through Q2 and Jolyon Palmer also dropped out.

To Ocon: “If you want to go past Sainz go past him, don’t get any crap on the tyres.”

Perez: “Oh my God what did you guys do with the tyres? I have no grip at all.”
“Keep pushing, Checo.”

To Ricciardo: “It’s going to be B-bal two and mode nine.”

Palmer: “Completely lost the rear at the end of the lap,”
“Understood. Think you’d’ve got P10 otherwise.”
Palmer: “Yeah.”

Sebastian Vettel was happiest of all but Nico Hulkenberg drew particular satisfaction from his qualifying performance.

To Alonso: “Just wait at the red lights, I’ll count down for you.”

To Ricciardo: “All the cars ahead of you are spread by about five seconds so it won’t be quite as busy the next run.”

Hamilton: “Tyre temps all over the place.”
“I wouldn’t trust the sensors at the moment, we have no confidence in them.”
Hamilton: “Should I reset them?”
“Negative.”

Sainz: “A lot of oversteer. Not a lot of confidence.”
“Raikkonen: “I struggled a little bit more with the front.”
“We saw that set wasn’t as good a temperature, the next set should be better.”
To Hulkenberg: “So situation is the two McLarens have followed you out of the pit lane. Alonso is eight seconds behind.”
To Ricciardo: “So do your own thing, focus on your tyres.”

“P1 Sebastian, pole position, well done.”
Vettel: “Woohoo! Yes yes yes. Oh I touched the wall badly out of 19 but I had to go for it! Grazie! Grande lavoro. Grazie.”

To Verstappen: “P2 mate. [Censored by FOM] close. Unlucky mate. And another good session.”
Verstappen: “Shame, the last lap, I don’t know why, the car’s sensitive to the front wing I think.”

Hulkenberg: “Did we beat the McLaren or not?”
“You’re in front of both McLarens.”
Hulkenberg: “[Censored by FOM] yeah baby, in your face!”

Vandoorne: “Shame we couldn’t find a little bit of time in Q3. Good to get both cars in Q3.”
“Yep, the points come tomorrow, we can race well from here.”

One comment on ““In your face!”: 2017 Singapore Grand Prix qualifying radio highlights”