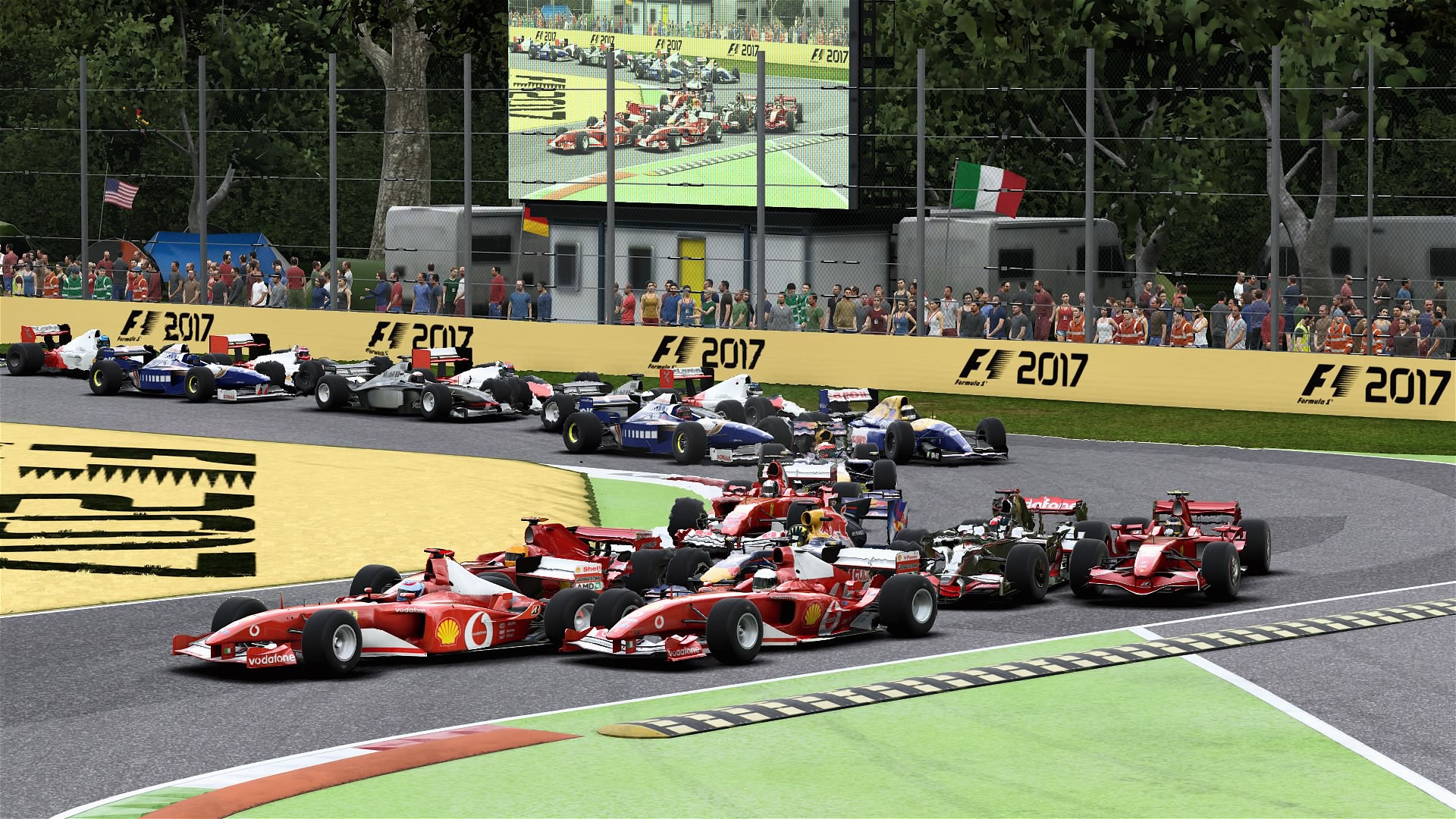 The end of August is always a good time of year to be a Formula One fan.

Not only does the sport return from its summer break for one of the best grands prix of the season at Spa, it’s also the traditional release window of Codemasters’s official F1 game.

After producing their best entry to date in 2016, does this season’s edition manage to improve on a winning formula or see the series fall back into the pack?

While Liberty Media continue to forge a new future for Formula One, Codemasters remain sadly shackled by the restrictions of the licence agreement they signed in the Ecclestone era. That means there is still no active driver market or new additions to the calendar in career mode – features that have long been near the top of fans’ wishlists.

That said, despite the restrictions on them, it’s hard to think of what more Codemasters could add to this season’s official game.

This season’s new generation cars at the true stars at the heart of F1 2017 – and fans will enjoy getting to put F1’s fastest ever machines through their paces.

The additional downforce and wider tyres of this year’s regulations mean there’s so much more mid-corner grip available. It’s just plain fun to throw the cars into the corners without having to worry about running out of grip, while the harder tyres for this season means you can afford to push more without feeling restricted by tyre degradation.

Car performance feels authentic too. Ferrari and Mercedes will trade wins with Red Bull hanging around just behind to capitalise should the opportunity present itself. Race as Williams and get the difficulty level right for you and you’ll find yourself unable to touch the front runners while trying holding off the Force India duo of Ocon and Perez.

And it’s so much easier to find that perfect difficulty setting with the long-awaited introduction of a difficulty slider. You can now select the AI performance on a one-to-110 percent scale, allowing you to strike that perfect balance between challenge and fun and even adjust for each circuit if you’re finding performance inconsistent between the 20 tracks.

The default wheel settings – at least on a Logitech G29 – feel good, but veterans will probably want to play with the saturation and linearity to find a better sensation of car on road. Controller users will be pleased to learn that this year’s game feels more responsive on a pad than last year.

Graphically, F1 2017 is of identical quality to what 2016 offered. While it wasn’t possible to test on a PlayStation 4 Pro, players on that system will be able to enjoy 4k resolution and HDR enhancements to visuals. Presentation of this year’s game has also been enhanced by the official FOM graphics making their first ever appearance in the series during pre-race cinematics.

Bringing back the classics

The 2017 cars are a lot of fun to drive but this year’s blockbuster feature is the welcome return of classic Formula One cars for the first time since their one-off appearance in the 2013 edition.

There are 12 classic challengers covering the last 30 years of the sport, from the McLaren MP4/4 of 1988 to Sebastian Vettel’s championship-winning Red Bull RB6 of 2010. Fans may feel a little disappointed that some of the sport’s earlier eras are not represented, but as a 27-year-old lifelong fan, it was personally very enjoyable to recognise so many cars that I already felt an emotional connection to.

The cars available cover a V12, V10 and V8 engine eras and all can be raced at the same time on any circuit with the option to separate the race into two classes. While the classics’ handling can feel like more of an approximation of their performance rather than truly bespoke for each machine, every single car on show here offers something different and nuanced.

There’s a lot of enjoyment to be had simply from picking a circuit in Time Trial mode, running a few laps in Mika Hakkinen’s McLaren MP4-13 before using the pause menu to quickly switch to Lewis Hamilton’s MP4-23 and feeling the difference a decade of evolution can make.

Career mode is back in much the same form as last year, but Codemasters have brought some major upgrades for the new season. The interesting research and design feature from 2016 has been completely transformed and now gives players far greater depth to develop their cars.

You can now choose from over 100 upgrades to earn over the course of your ten-season career, covering aerodynamics, powertrain, chassis and reliability upgrades and even some extra team based bonuses. You’re at liberty to choose what to upgrade and when, allowing you to strategically focus on improving your car’s weakness or enhancing its strengths. Don’t worry if it seems intimidating at first, there’s plenty of information available to help make your choices and you can even follow the engineer’s recommendations if you prefer.

Reliability is also a key focus for career this year as now you’ll have to consider the health of all of your power unit components and gearboxes. The more you use and abuse your ICE, your MGU-H or ERS, the more they’ll wear. If you’re not careful, you’ll push your parts to a potential race-ending failure and a grid penalty for the next event.

Component wear scales with race distance and the game makes it clear how close each of your power unit parts or gearboxes are to the end of their predicted lives with live data available on the HUD during races. It’s unlikely you’ll have too much trouble avoiding grid penalties unless you run a lot of laps in practice sessions.

Combine the upgrades and reliability systems together and career season really do feel like one long, continuous campaign as opposed to just a series of single races. While career mode remains the most satisfying part of the series, it does feel like the hardcore fans looking for that authentically challenging full F1 experience will get the most from the experience this year.

On track, F1 2017 offers more of the racing experience that was so immersive last year. With all the authenticity options activated, full distance grands prix have never been as enthralling on consoles as they are in F1 2017.

New ‘invitational events’ in career mode provide bitesized challenges for players to take on using the classic cars. From overtaking challenges requiring you to pass a set number of cars in a time limit to checkpoint challenges, they’re a welcome addition to the series. But beyond their initial novelty value, hardcore players will probably find themselves skipping these events during their careers.

But there’s more. Custom Championships are an extra addition that will provide players with even more fun outside of the main career mode. Based on themes such as street circuits, wet weather, endurance or double header events, these shorter championships cover both 2017 and classic cars and provide some compact but entertaining challenges for players to beat.

The Monaco Grand Prix can now be run at night, which looks spectacular with the Monte Carlo streets illuminated by shining lights. Shortened alternative versions of Sakhir, Silverstone, Suzuka and the Circuit of the Americas also provide a little extra variety to the track list.

Hardcore fans of Codemasters’s series will also appreciate some of the ‘quality of life’ improvements that have been made to this year’s edition. Booting up the game for the first time, you can import your F1 2016 save and have all your settings and career profile carried over to allow to get right into playing.

Players can now create up to ten career mode drivers to each profile, each with their own name, driver number, helmet design and avatar. This means you can start a full, 100% distance career for Williams, run a 50% career for Red Bull and a casual five lap Haas career simultaneously, switching between them whenever you want.

The ability to save multiple controller setting presets is a small but very welcome feature that will make it far easier to play around and find the right steering saturation and force feedback settings for your pad and your wheel or even have different settings saved for different cars.

The occasional problems that do exist, however, can be frustrating.

On a standard PS4, helmet textures did occasionally become blurry. We did also experience a small graphical clipping glitch on some of the cars while in T-cam view, although admittedly this was after the T-cam camera settings had been adjusted from their defaults.

What is less forgivable is how difficult it became to read some of the game’s text was. In a move to perhaps embrace the current console generation’s move into 4k resolution, the text size seems to have been reduced this year. On a reasonably sized TV running in 1080p resolution, it was occasionally very difficult to make out laptimes or read crucial race data on display, which was not a problem in F1 2016.

Similarly, when racing in cockpit view in a Williams, the race engineer menu and text from the game’s overwise informative HUD was completely lost against the FW40’s white livery.

While there is so much new content in the game, it is a little disappointing see so many cutscenes, animations and presentation elements recycled directly from last year’s game.

But the fact that these are the most outstanding issues from a fair few hours of play reflects that Codemasters have again produced a Formula One game that is truly deserving of their licence.

The series will never provide the fully realistic, hardcore simulation of the sport that so many ardent simracers would ideally want it to, but with so many quality sims available on the market and more soon to be released, Codemasters know their series doesn’t have to go that way.

Instead, F1 2017 manages to hit a very satisfying balance between authenticity and accessibility. From the feel of the new 2017 beasts to the variety provided by the classics, a deeper career experience, new custom championships and a host of minor improvements, there’s an awful lot available for players to enjoy this season.

It’s never been easier to recommend an official game to both casual fans and lifelong enthusiasts of the sport.

We’ve got copies of F1 2017 to win every weekend in the Predictions Championship. Make your grand prix predictions before qualifying each weekend for your chance to win. Enter here: