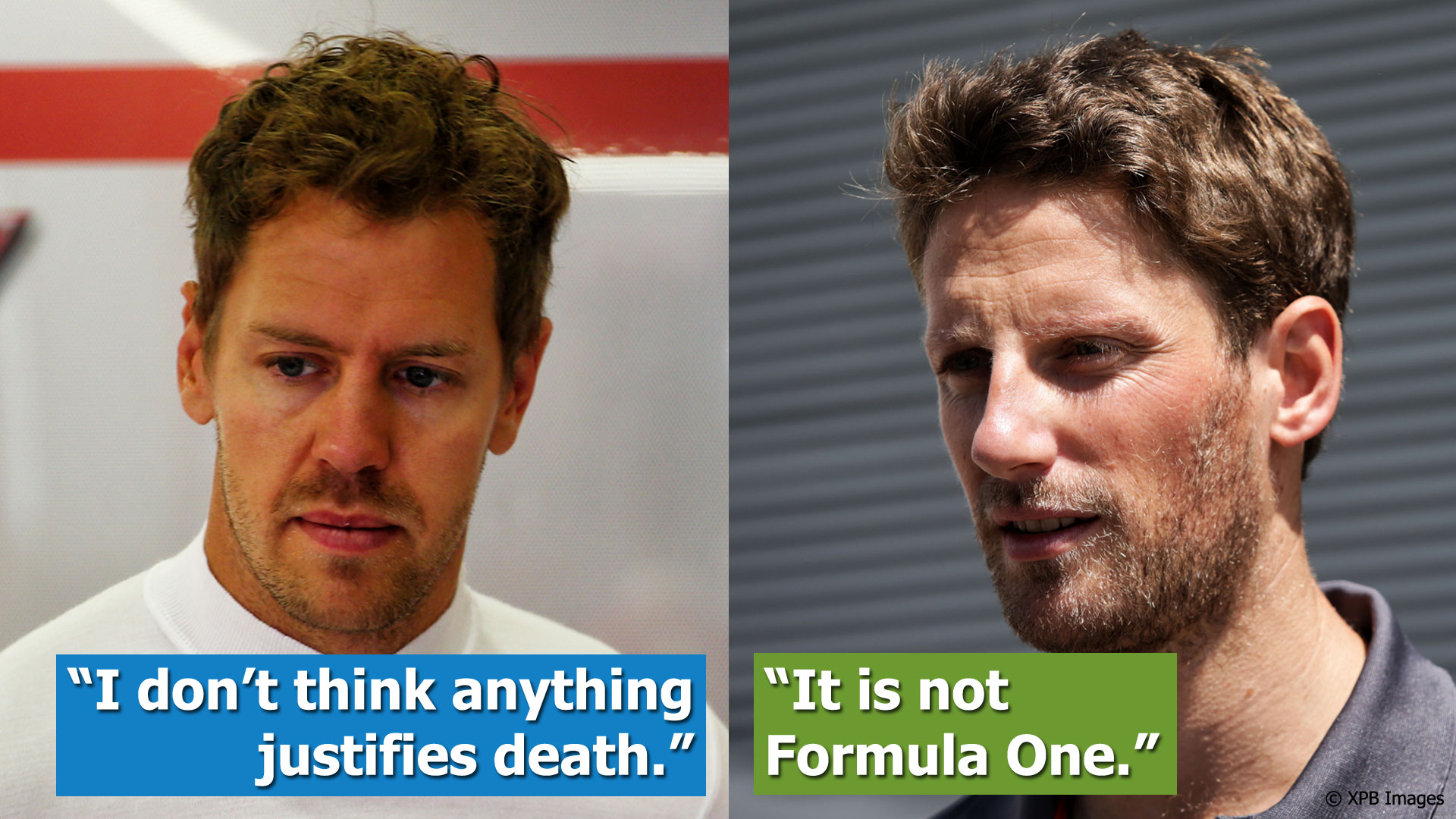 Is the Halo head protection device really is popular among Formula One drivers as the FIA would like people to believe?

On Wednesday the sport’s governing body announced Halo will be mandatory from the 2018 F1 season following “the repeated support of the drivers”.

This jars with a report last January which claimed an FIA poll of 22 drivers found just five were in favour of introducing Halo. Seven were against, while the rest abstained or expressed no preference.

What do drivers really think of Halo, and have their opinions changed since they started testing it at the beginning of last year? Here’s what they’ve said about it.

At the beginning of last year former Formula One driver Alexander Wurz, now a chairman of the Grand Prix Drivers’ Association, declared F1 drivers “feel it’s time to implement the extra protection at the latest in 2017”.

Not all drivers are members of the GPDA. According to Romain Grosjean, who replaced Jenson Button as a GPDA director in May, just 12 of the 20 current F1 drivers belong to the organisation.

The FIA pressed ahead with its Halo development plan in conjunction with Ferrari, which gave the device its debut in pre-season testing last year. Initial reactions were mixed, but some drivers later revised their opinions:

This is the worst looking mod in Formula One history. I appreciate the quest for safety but this is Formula One and the way it is now is perfectly fine.
Lewis Hamilton

I think safety and security in F1 and the standards are pretty high and very good. I would be happy to accept those risks and keep running as we are.
Nico Hulkenberg

Safety is the most important thing and I totally agree with the Halo or maybe with the closed cockpit or whatever, I agree with this change. But it doesn’t look very nice to be honest, so we’ll see how it’s going to be. If it’s good for safety, then it’s fine.
Felipe Massa

Every team and almost all of the drivers racing in F1 today tested Halo during the course of last season. The tests shed light on several practice considerations with the device, such as its effect on visibility and whether it would hinder drivers getting out of the cars:

Apart from getting into the car, I didn’t notice much difference. I didn’t really notice it, apart from blocking my mirrors – I couldn’t see the rear wing. I could run it this weekend if they allowed it.
Lewis Hamilton

It makes no difference, we can still get out of the car.
Kimi Raikkonen

It’s pretty hard to get in and out, that’s the first impression that I got. Getting in and out needs to improve somehow, also for the mechanics to be able to fasten the seat belts. There are things to look at.
Fernando Alonso

It feels weird to have something in front of you. It is like having a cap pulled down really far. You can see where you are walking, but you can’t see anything else.

I don’t like it. The visibility is not as good as I hoped. So I think at tracks where there is elevation it is going to be a problem.
Kevin Magnussen

Tested the Halo for the first time. Positively surprised! Didn’t notice it at all whilst driving. The looks of it we’ll get used to.
Marcus Ericsson

I don’t mind the Shield, I think it looks OK. It’s definitely a good step compared to the Halo.

I wouldn’t mind trying out the Shield, see how it is for visibility, and if there’s any other issues. I think for safety it would be a good step compared to what we have now.
Valtteri Bottas

Look-wise I don’t think there’s an awful lot of difference between either of them.
Kimi Raikkonen

Looking from the outside, probably the Red Bull solution (Aeroscreen, similar to Shield) looks a little bit better from an aesthetic point of view, but the FIA will decide the best one.

I hope there are more options (for cockpit protection) coming because it’s very early days and the important thing is to find the best solution. It’s a ‘must’ that will come from next year (2017), hopefully.
Fernando Alonso

It fell to Sebastian Vettel to evaluate the Shield at Silverstone last weekend, but he declared himself unhappy with the device.

Aide from questions of how well Halo worked, several drivers continued to oppose it on the grounds they felt it was unnecessary. At least one of them also claimed other drivers had exaggerated the extent of its support:

Most people I speak to are against it but don’t really voice it in the press, so I think there’s a bit of a divide. Some of the older guys prefer it and the younger guys don’t.
Jolyon Palmer

We had a vote among the drivers and I think 90 to 95% voted for it so I don’t know why all of a sudden it comes up the way it does.

I think it’s the wrong impression as I think the majority in here as well said. We don’t like the looks of it but I don’t think there’s anything really that justifies death.

We’ve always learned from what happens, incidents that happen on track and we’ve tried to improve. That would be the first time in human history that we learn a lesson and we don’t change.

So I think it’s up to us to make sure it does happen otherwise I think we’d be quite stupid.
Sebastian Vettel

The thing is we’ve never had a proper vote in it, so no one can ever know.
Jolyon Palmer

Strikingly, at least two of Halo’s strongest supporters are no longer on the grid:

It’s very clear. The large majority are definitely for halo, a very large majority. We had the presentation from the FIA and you can only be for it. I understand people who have something against halo, I understand the purist and things like that, but nevertheless it’s the right thing to do.
Nico Rosberg

(Palmer’s) incorrect and it’s very unfair for him to speak for other drivers as well because each individual should speak for themselves on a safety issue. We sat down for an hour with the guys from the FIA who developed the Halo with Ferrari. It’s a great solution.
Jenson Button

If these two were among the five who backed it in January, support for Halo among the drivers is extremely shallow.

Among the drivers Halo has had supporters and opponents from the beginning. The middle ground is occupied by reluctant converts and increasingly emboldened critics:

We don’t need anything. I am against every Halo or Shield or whatever, it is not F1.
Romain Grosjean

In principle, I think it doesn’t look very nice. But if it can help saving lives, and if thanks to it at least the two drivers who died recently could still be here with us, then I think it can be the ugliest system but nothing could justify not having it fitted.
Sebastian Vettel

The way the Formula One cars should look should remain the same. I think we have enough protection so far. If they are good ideas they should be considered but so far I am quite against it to be honest, both those options.
Daniil Kvyat

I paid very close attention to the great briefing we were given on it. I take safety very seriously and I think the interesting thing, while it doesn’t look great and doesn’t look in the racing spirit, you can’t ignore the fact that the chances are 17 percent better* of saving a driver’s life in the incidents that have happened in the past.

However, we still have to continue to improve and at some stage we would have to close the canopy completely because that would be 100 percent. There were still some examples, like Felipe [Massa]’s accident in Hungary in 2009, where it wouldn’t have stopped him from being injured. I think with Justin [Wilson’s], I believe they said it wouldn’t have saved him because it was a pointy object from above, but a closed canopy would have perhaps.
Lewis Hamilton

*See here for more on this figure

The drivers, even if we hate it and know it’s not in the DNA of the sport, when you look at it, you say it makes some sense.

I don’t like it, but it’s like when you’re dad tells you you are wrong and you know he is right but you don’t want to admit it.
Carlos Sainz Jnr

The FIA clearly faces an uphill battle to convince most fans and journalists that Halo is the right solution at the right time. It would be a much easier sell if all the drivers had repeatedly supported it, but that simply isn’t the case.

What they say about…

Browse all What They Say About… articles

67 comments on “Is Halo really as popular among the drivers as the FIA claims?”