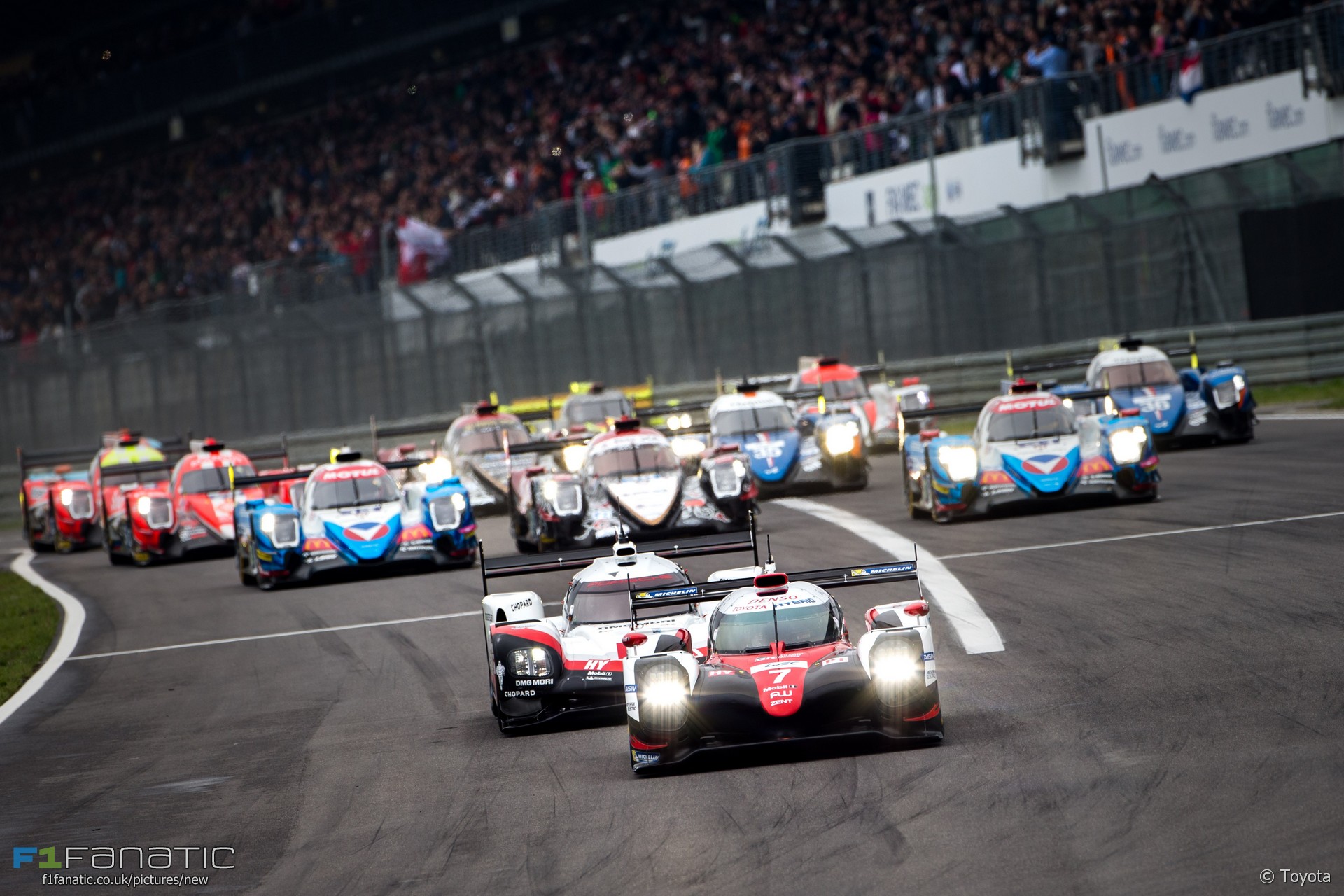 Formula E championship leader Sebastien Buemi chose to miss the series’ double header of races on a new circuit in New York to race in the Nurburgring Six Hours – but his Toyota broke down before the race began.

It was a huge weekend of racing action which also featured IndyCar’s last street race of the year in Toronto, Formula Renault Eurocup at the Nurburgring, World Touring Cars in Argentina and NASCAR on the Loudon oval in New Hampshire. Enjoy the highlights below.

Fuel pump failure on the number eight Toyota which Buemi shared with Anthony Davidson and Kazuki Nakajima meant the Formula E championship leader spent the formation lap crawling back to the pits using electric power only. Perhaps the racing gods have a sense of humour, though you could forgive Buemi finding little to laugh about a problem which left them five laps down at the finish.

Ahead of a crunch decision on whether Porsche may scrap its WEC effort and potentially switch to Formula E or F1, the manufacturer’s top brass were present to see the team score an emphatic one-two, albeit one which was decided by team orders. Brendon Hartley, Timo Bernhard and Earl Bamber’s double-points win at Le Mans meant their scrap with the sister car of Andre Lotterer, Nick Tandy and Neel Jani was called off when Porsche held the latter in the pits for an extra 20 seconds.

LMP 2 was dominated by the Le Mans-winning Oliver Jarvis, Thomas Laurent and Ho Pin Tung for Jackie Chan DC Racing, GTE Pro was won by the Ferrari duo of Alessandro Pier Guidi and James Calado after a close fight in the class, while GTE Am was won by Patrick Dempsey’s team run in cooperation with Proton Competition in the hands of Christian Ried, Matteo Cairoli and Marvin Dienst.

Sam Bird became only the second driver in Formula E history to win both races on one weekend, with a pair of dominant victories on the very tight course. Alex Lynn surprised by taking pole position for his first Formula E race on Saturday while deputising for Jose Maria Lopez, another WEC absentee. But he was beaten to turn one by Daniel Abt and later retired. Bird passed Lynn early on however and then took Abt on lap 16 and after that was never header. Abt’s retirement promoted Techeetah duo Jean-Eric Vergne and Stephane Sarrizan to the podium.

In the Sunday race the pole sitter was again beaten to turn one by the driver alongside him. This time it was Bird who lost out to Felix Rosenqvist. However Bird pulled a copycat move to his one on Abt in race one however to reclaim the lead and this time was joined on the podium by the Mahindra pair, Rosenqvist leading Nick Heidfeld. Red Bull junior Pierre Gasly drove Buemi’s Renault and briefly held third on the final lap but crashed exiting the final corner and crossed the line in fourth place in his damaged car.

Josef Newgarden took his second win of the season at Toronto after a fortuitously-timed first pit stop, shortly before a crash for Tony Kanaan caused a caution period.

Helio Castroneves dominated the race early on but he, Simon Pagenaud and Graham Rahal were caught out by the early yellow period and had to fight their way out of the midfield. Pagenaud did the best job, bringing his car home fifth. Alexander Rossi and James Hinchcliffe completed the podium, the latter taking a popular rostrum finish at home.

Scott Dixon held his championship lead despite tangling with Will Power on the first lap. The contact put Power out while Dixon recovered to tenth.

The partially reversed grid for race one meant a front row of Yann Ehrlacher and Tom Chilton. The young Frenchman got off the line well, but into Chilton tapped the Lada wide in turn two. That left Ehrlacher third behind Mehdi Bennani, who he quickly re-passed, and later in the race Chilton received a five-second penalty which gave Ehrlacher the win. Bennani was second and Esteban Guerrieri reached the podium at home.

An unwell Norbert Michelisz won race two after the pole-sitter Nicky Catsburg suffered a puncture at half distance while leading comfortably. His second tyre failure of the weekend meant he left Argentina pointless. Tiago Monteiro finished second while Thed Bjork salvaged a podium for Volvo ahead of Guerrieri.

Will Palmer lost his championship lead after an indifferent weekend at the Nurburgring. Robert Shwarzman heads the points after winning race one, though his lead would be much greater had he not gone off later in the wet race two, finishing ninth.

Sacha Fenestraz won the rain-hit race and lies six points behind Shwarzman in the standings and four ahead of Palmer. The field will be in action again this weekend on the Red Bull Ring.

In a race with eleven lead changes and seven cautions, Denny Hamlin emerged as the winner at New Hampshire. Hamlin came to the fore late on, but did enough to reach the flag first. Stage 1 was won by Martin Truex Jr, who lead over 130 laps of the race, while Kyle Busch took stage 2 honours before falling down the order. Kyle Larson finished second after starting in 30th and last, hounding Hamlin in the closing laps and finishing just half a second back.

Lewis Hamilton comfortably won his home Grand Prix from pole position while team mate Valtteri Bottas put in a great drive – and benefited from late bad luck for Ferrari – to complete a Mercedes one-two. Both Kimi Raikkonen and Sebastian Vettel suffered punctures in the closing laps of the race, resulting in them finishing just third and seventh respectively, with Vettel’s championship lead slashed to one point.

Charles Leclerc continued to monopolise feature race pole position in Formula Two and used it to produce his fifth win of the year. Nihcolas Latifi won the sprint race. In GP3 George Russell took his second win of the year on Saturday and now holds a 35-point lead over Anthoine Hubert. Giuliano Alesi moved up to sixth in the championship by winning race two.

Thanks to Robert Mathershaw (@mathers) for contributing to this article.