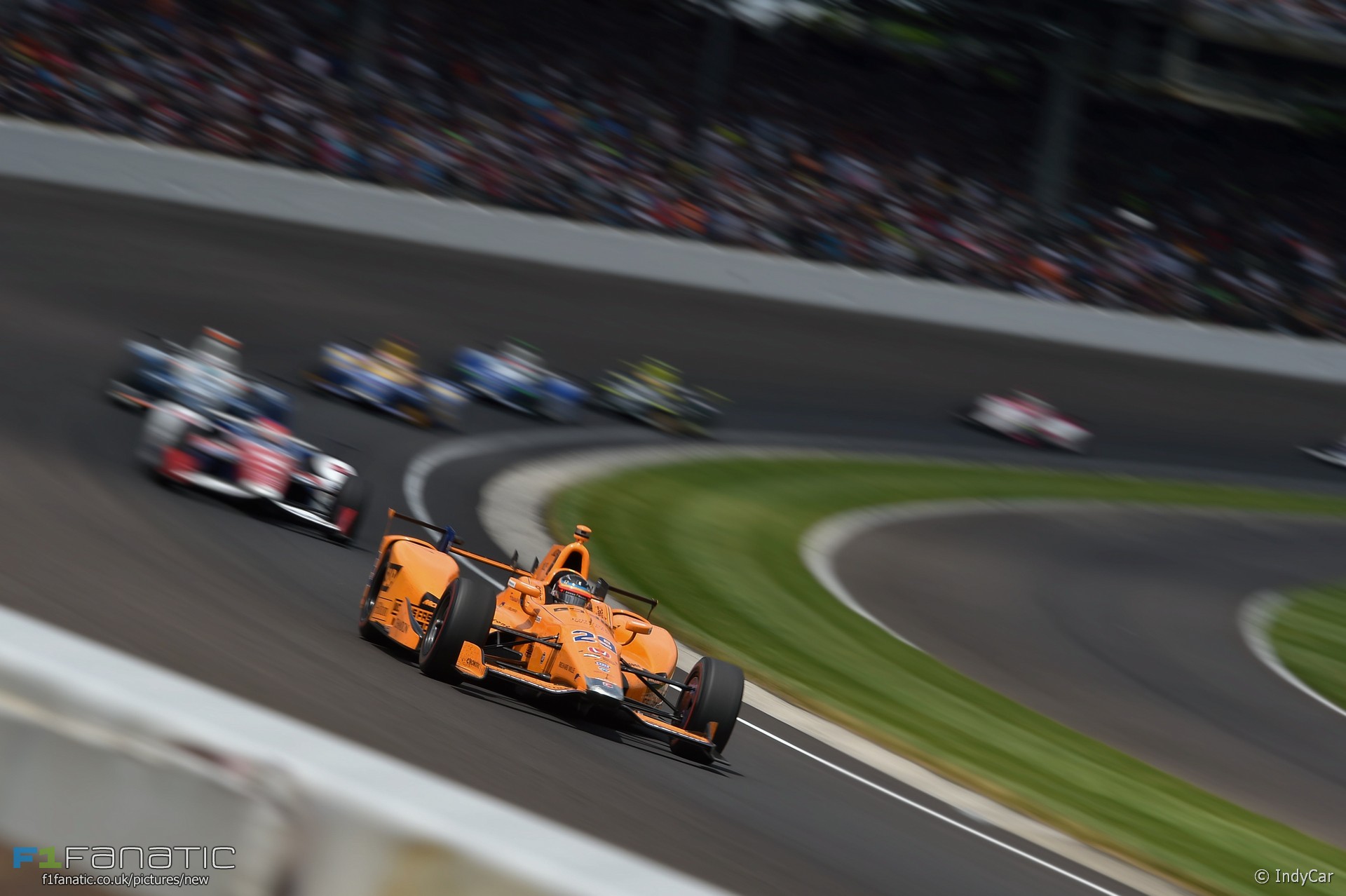 Fernando Alonso’s Indianapolis 500 appearance introduced the race to a legion of new fans from Formula One.

What did they make of the race? Here’s what they said about it on Twitter:

For a lot of people this was their first experience of watching the Indianapolis 500. Most seemed to enjoy what they discovered, with a few exceptions.

Watching the Indy 500 for the first time. They've read a prayer and fired some guns. This is quite different to F1.

Watching the Indy 500 for the first time, fecking hell it's boring. Obviously hard to drive etc but much harder to watch! I'll stick to F1.

Never really heard of the Indy 500, but I can't take my eyes off it now! Hope Alonso wins #Indy500 #F1 #FernandoAlonso #VivaEspana

The praise for Alonso’s efforts was near-universal. And many also added their appreciation that he had been bold enough to skip an F1 race to compete in another series.

Gotta give it up for @alo_oficial he came he saw went out and kicked some serious ass today. #Respect #Indy500 #IndyCar #F1

Simply brilliant, in F1 or Indy 500. Only @alo_oficial

So what now for Fernando? He could drive the rest of the F1 season one handed and blindfolded after his Indy performance. Awesome talent

In all the hullabaloo about Alonso the double F1 World Champ everyone gave short shrift to others racing at Indy. Sato included

Alonso is a class above the rest of the Indy car drivers, he's elite level and Indy hasn't got many who could compete in f1

I really hope that Alonso returns to indy next year was so great to watch him @McLarenIndy showed every one how to overtake F1 style! #indy

If anyone needed proof that F1 drivers are the absolute best in the world…how about "rookie" Fernando Alonso leading his first Indy 500??

However his retirement from the race due to a Honda engine failure was seen as another marketing disaster for the company. They seemed to draw more criticism for that than they won praise for powering Takuma Sato to victory.

So @alo_oficial goes to #Indy500 due to Honda engine failures, and… the the engine fails in Indy. Really @HondaRacingF1? #F1 #Indy500

Maybe Honda should be allowed to apply the tactic they use in the Indy 500 in F1, just deploy 15 cars one of them should hang on and win!

I'm not sure I'll want a Honda in the near future. Engine failures aplenty, both Indy and F1. What does that say about their engines

So not only cannot Honda build a reliable F1 engine,they also have the same issue in Indy car. Poor from a world class manufacturer

Cool to see Takuma Sato win, but man Honda needs to take a long hard look at the state of their racing engines. F1 and Indy both a mess.

So.. Alonso goes from having engine failures in F1 cars to Indy 500 cars.. curse of Honda continues lol

Honda needs to stick to street cars. Easily the most unreliable engine in Indy and F1

Poor Alonso. First Button pees in his car and crashes it. Then his Honda engine during Indy 500 dies #f1 Luckily Honda took P1 in Indy

Feel so sorry for Alonso. Honda can't give him a drivable car in F1 or the Indy 500!

Japanese driver wins Indy 500 with a Japanese engine. Imagine that will go down well with Honda bosses! #Indy500

Those Honda engines are rubbish. First it happens in f1 and now in Indy. He had a good chance of winning as well.

What's happened to Honda? Crap in F1, unreliable in Indy, 3rd best engine in MotoGp. All from a company that used to pride itself on engines

Alonso retires from Indy 500 with an engine failure. He couldn't escape the McHonda fate from F1 even in Indycar.

The F1 elitist in me wanted Alonso get into an Indy car, walk out and win. He obviously had the race craft to do that, not the car #Indy500

Sato’s win drew a mixed response. Many praised his achievement of becoming the first Japanese driver to win the race.

ok but i didn't realise takuma sato did indy 500??? when did he start that??? grats tho i always liked him in f1

What a drive from Sato. @f1 had a proud showing today in Indy.

I've liked Takuma Sato since his F1 days happy to see him win the Indy 500. Especially after the disappointment 0f 2012.

Others who viewed his time in F1 more negatively felt his success reflected poorly on the standard of competition in the race.

Sato. One of the worst F1 drivers ever wins the Indy 500……that really speaks to the gulf between the talent pools in each category

Sato lol, I remember when Schumacher slapped him around his helmet for poor driving in F1, sato the crasher now Indy 500 champion. Only in

wtf Takuma Sato is still driving and just won the indy 500, he were a rank F1 driver back in the day

Even the biggest joke to ever race in F1 can win the Indy 500. Maybe Palmer does has a future in Motorsport.

Positive views on the race

A lot of viewers expressed positive opinions of the race, particularly when comparing it to the Monaco Grand Prix earlier the same day.

The Indy 500 was awesome! However the F1 race in Monaco was boring, especially watching after Indy.

"indy was better than monaco",it's like these f1 lifestyle geeks have emerged from the dungeon and realised other motorsport exists.

As much as they need to sort out the overtaking in F1 with try downforce caused turbulent air; but Indy is down a few levels

Having watched both the Monaco GP & the Indy 500 today, I really am beginning to question the point of F1. It's certainly not entertainment.

After the uneventful F1 I'm watching the much more exciting Indy 500. Alonso is doing very well so far

Max Chilton finishes 4th in the Indy 500! Hopefully people give him some credit for once as he and his strategy was awesome

Gutted about Alonso, great drive from him could have won it. Indy car is defiantly more entertaining than f1 at the moment. #indy500

Watched F1 Monaco GP and Indy 500. One was full of overtaking, great driving and intrigue. The other had nice boats nearby.

No competition today between @F1 and @IndyCar … Indy wins running away. #MonacoGrandPrix #Indianapolis500

Ok Indy 500 I think you've won over some fans. See you next year for definite!

Alonso retirement aside, that was a brilliant race, truly edge of your seat stuff. Definitely caught the Indy bug now. #Indy500

Indy has shown up F1…..Monaco biggest race of the calendar outdone and outclassed #LessonsToBeLearnt

Great win for takuma sato, what a cracking end to the indy 500, alot better than F1 :)

I can't believe some people say F1 racing is better than Indy Car.

Alonso is out . I hope the whole world is back to watching indy and ovals. I love ovals as much as f1.

really would like to see more current F1 drivers going off and do indy or le mans more often. You never know till you try it out. #Indy500

Sorry, give me Indy drivers over carpetbagging F1-ers any day. #Indy500

Hahaha Indy car is so much more fun than F1.

The Indy 500 has been much more entertaining than F1.

Never thought I'd say this but the Indy 500 is way more exciting than Formula One. Definitely need to standardise the cars in F1

F1 is great but there is no substitute for raw speed. That's what makes Indy 500 special & where F1's gone backwards

I apologize for turning my nose up at American motorsports. Watching Indy to see how Alonzo is transitioning from F1. I'm impressed!

for some reason i am more hyped for indy then F1

The Indy 500 intros are absolutely fantastic. Can we have that in F1 please?

Negative views on the race

Not everyone liked what they saw, however.

comparisons being made about amount of passes in indy and F1 , lets not forget no corners make it a little easier .

Everyone going mental about Alonso's performance yet Max Chilton, the slowest driver in F1 is leading. 😂 – Yes Lewis Indy must be easy

Really really want Chilton to win, slowest man in F1 conquering Indy may well take the shine off the event for F1 fans

Woow #Indy500 is reall boring, though only @SochiAutodrom F1 was bad..

Never seeing that Indy series back. This time only for @alo_oficial

There were also calls for the date clash between the Monaco Grand Prix and Indianapolis 500 to be resolved so more drivers can switch between the two series.

So Formula 1– I think the Indy 500 is a bigger draw. How about we move the Monaco date finally? Indycar welcomes more F1 teams & drivers.

Can @fia please make sure there won't be any calendar clashes with the Indy 500 & the Le Mans 24 so we can see more @F1 drivers compete. #F1

As much as I love this full day of racing, imagine if the Indy 500 got its own full day to itself. How many F1 & NASCAR drivers would enter?

Here are some of the other points made and questions raised by fans relating to the race:

Out of the 17 races on the 2017 IndyCar calendar, only six are held on ovals. The rest take place on street courses (five races, including two in Detroit this weekend) and road courses (seven races). You can find a guide to all the circuits here.

Is Taku the 1st driver to get a podium at Indy at both F1 and Indycar?

This series needs head protection. In F1 I don't think they need it but indy car they do #Indy500 🇺🇸

The crash involving Scott Dixon and Jay Howard, in which Helio Castroneves also had a near-miss, was a vivid reminder of the huge dangers involved in this type of racing. IndyCar has looked into increasing head protection following the crash which claimed the life of Justin Wilson in 2015. Following that crash it strengthened the tethers on its cars (known as SWEMS) which attach not only wheels to the cars, as in F1, but substantial pieces of bodywork as well, such as the nose boxes.

Did you watch the Indianapolis 500 for the first time on Sunday? What did you make of it?

94 comments on “The Alonso effect: What F1 fans said about his Indy 500 adventure”