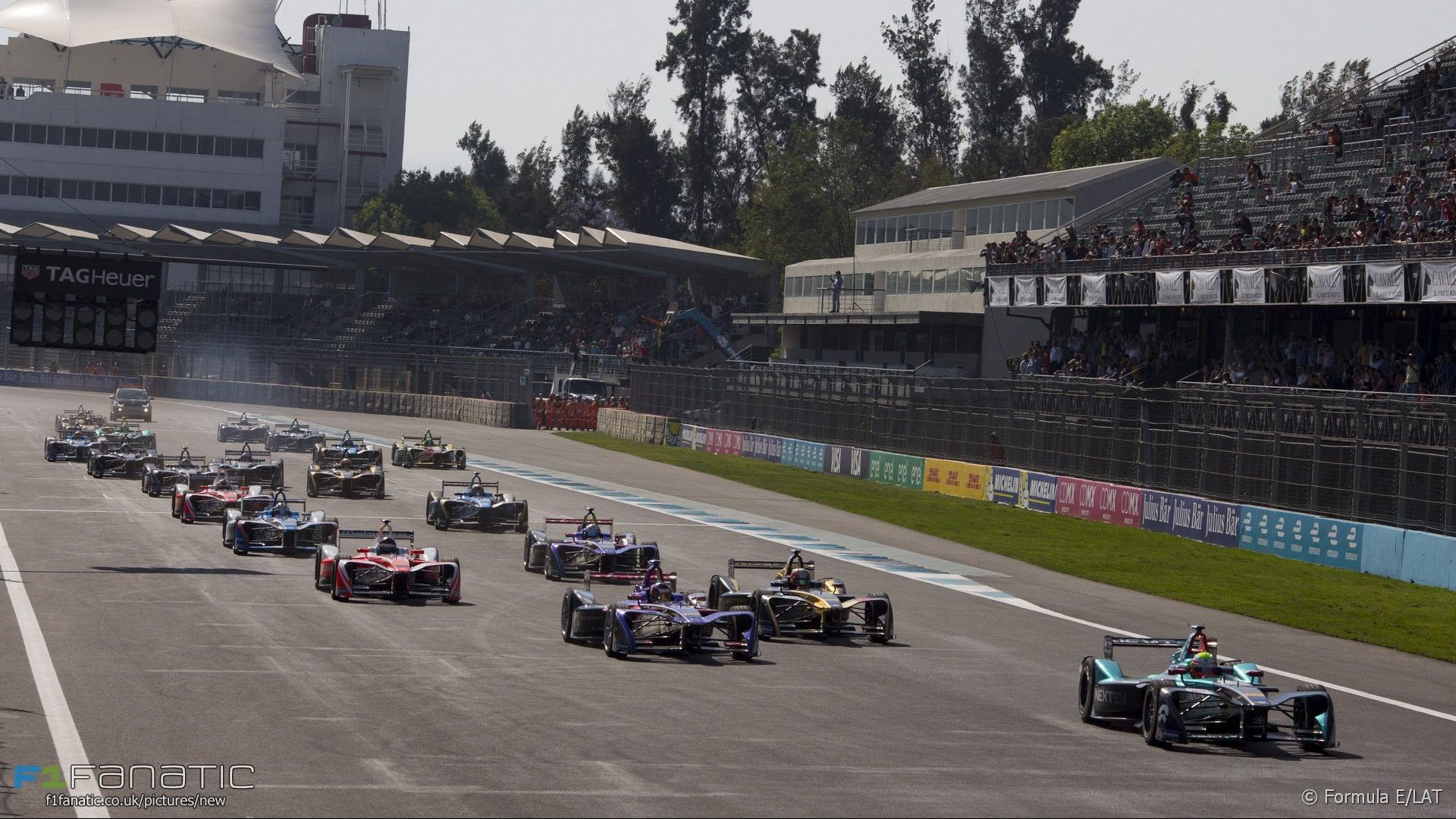 Madness ruled as Formula E raced around Mexico City, with numerous safety cars and incidents littering a race that was eventually won by some incredible energy saving.

Elsewhere the BTCC kicked off with a predictably chaotic opening round at Brands Hatch and the World Rallycross Championship began with a familiar face on top in Spain.

Lucas di Grassi was first to the chequered flag as Formula E returned to Mexico City – but this time he was allowed to keep his win.

The Abt driver avenged his disqualification from last year’s race on a shortened, Formula E-friendly version of the Autodromo Hermanos Rosriguez. He recovered from a woeful qualifying and early setback which left him last in the early running.

A slippery track plus a penalty for original pole sitter Daniel Abt produced a mixed up grid headed by birthday boy Oliver Turvey. The NextEV driver led until he was forced out with technical problems after a dozen laps. Di Grassi’s day went from bad to worse when Maro Engel rear-ended him on the first lap and sent him into the pits for a new rear wing assembly.

Di Grassi’s team were at least able to complete the repairs during the first of several Safety Car periods. He returned to the pits when the yellow flags flew for Turvey’s car. He pitted for his mandatory car change five laps before the mid-race point and was joined by Jerome d’Ambrosio. The pair assumed the lead once the rest of the field made their stops, albeit with 30% less energy.

A third Safety Car period eradicated their lead but also gave them a chance to save power. At the restart Jose Maria Lopez attacked d’Ambrosio, but two misplaced wheels heading to turn one saw him spin out of third place. Sebastien Buemi, who was labouring the midfield, had a simultaneous spin, throwing away any chance of points on a miserable day for the championship leader.

This left Jean-Eric Vergne to attack d’Ambrosio but unsuccessfully for nearly ten laps before a mistake from d’Ambrosio at turn one allowed him through, though di Grassi was now clear up the road, and with the same amount of energy after some deploying some impressive saving skills.

The race ended under yellow flag in the stadium section after Nico Prost spun Nick Heidfeld while battling for fifth, who was collected by his unsighted team mate Felix Rosenqvist – eliminating both Mahindra’s and scattering a number of their competitors. Up front however di Grassi survived the drama’s to take a shock win ahead of Vergne, while d’Ambrosio ran out of energy late on with Sam Bird taking the final podium position.

Brad Keselowski took his second victory of the year despite being sent to the back of the field earlier in the race for speeding in the pits. Kyle Busch led more than half of the 500-lapper but was passed by his Penske rival with three laps to go.

Reigning champion Mattias Ekstrom won the opening race of the season after dominating the final. He took the lead when Johan Kristoffersson struggled to get away, and never relinquished it. Timo Scheider followed him home in second while Andreas Bakkerud fought off stiff competition from former champion Petter Solberg and Timmy Hansen.

Wet qualifying for the first BTCC round of 2017 produced a surprise pole sitter in Jeff Smith. But for the second year in succession Tom Ingram won the opening race.

The drama began within seconds of the lights going out as the fast-starting BMW of Colin Turkington was tagged by Matt Neal, eliminating both and bringing out the Safety Car. While Ingram was in control up front, Gordon Shedden and Adam Morgan pulled away from the field to complete the podium. While Jeff Smith’s challenge unravelled, eventually retiring with technical problems, his team mate Jack Goff took fourth, with Rob Austin fifth.

Race two was run in almost farcical circumstances: pole man Ingram couldn’t get off the line, causing an aborted start, but rather than falling to the back of the grid, he took his pole spot and was given a drive-through penalty. But when the cars eventually got away Jason Plato and Matt Simpson did their best to recreate the Turkington/Neal crash from race one. The contact fired Plato hard into the pit wall, brought out the red flags and gave Ingram his pole back, penalty-free.

However there was no repeat win for Ingram: Shedden and Rob Collard found their way through over the course of the race to take first and second respectively, though Shedden pushed on after the race ended unaware he’d won, as no chequered flag was shown. Ingram managed third, while Austin ended up fourth on the road until he was thrown out of the race for a physical pass on Andrew Jordan which was completed under yellow flags at Clearways. This promoted Morgan to fourth, Mat Jackson to fifth and Jordan to sixth.

Austin’s exclusion also affected the random draw for pole position for race three: Josh Cook was initially selected for pole, but the change to the race two results meant the returning Tom Chilton and his brand new Vauxhall Astra started the final race from the front instead.

Race three went the way of Andrew Jordan after a perfect start on the harder tyre, while Colin Turkington completed a sensational recovery from the first race drama to take second position ahead of Chilton, whose soft tyres slowly degraded. Neal ended up in a distant fourth, ahead of Morgan and Collard. Shedden took sixth, but the defending champion left Brands Hatch with a six-point lead on top of the table.

What racing action did you watch last weekend and what are you looking forward to next week? Let us know in the comments.