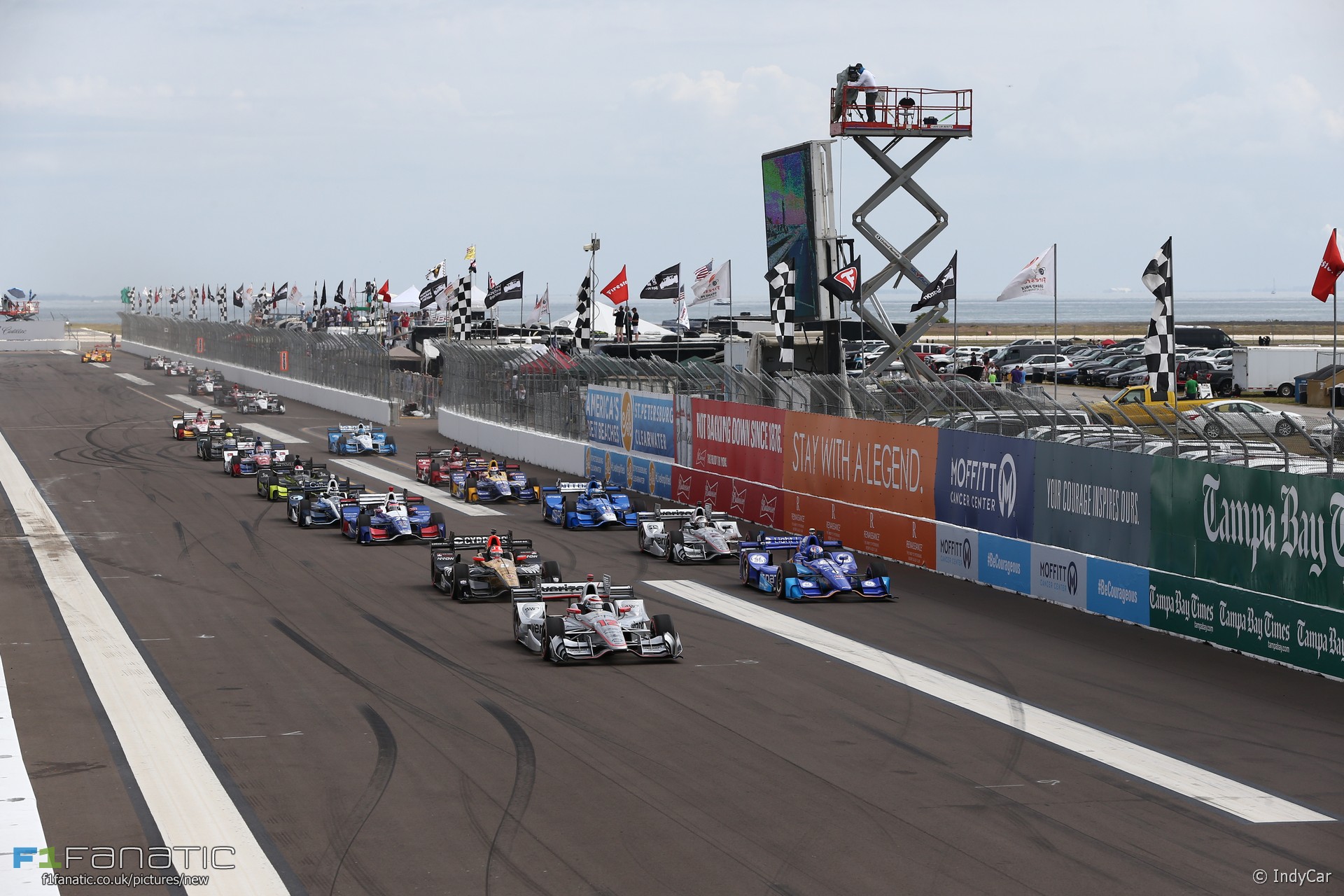 The new IndyCar season began with a surprise as the mighty Penske did not assert their usual dominance on the streets of St Petersburg.

Also last weekend the World Rally Championship greeted its third winner in as many rounds despite drama in the final moments of the Mexican round.

Meanwhile in NASCAR a fight broke out in the pits after a controversial end to yesterday’s race in Las Vegas.

When Sebastien Bourdais crashed in qualifying on Saturday and brought out the red flags – eliminating him from the session – no-one could have expected him to get within sight of the podium, never mind stand on top of it.

After that mishap for Bourdais Will Power took pole position and, unlike last year, was able to start from it this time. He led James Hinchcliffe and Scott Dixon but the revised, narrower turn three caused havoc behind. Graham Rahal and Charlie Kimball made contact which sent Rahal spinning and Kimball into Carlos Munoz, while JR Hildebrand, Helio Castroneves and Mikhail Aleshin also picked up damage.

The ensuing caution ended on lap five and Hinchcliffe pounced immediately, taking the lead and stretching away from Power. A puncture then sent Power into the pits where he suffered further misfortune, hitting a wheel gun at the pit exit, earning a drive-through penalty.

The leaders were beginning their routine pit stops when the yellow flags reappeared after a tangle between Tony Kanaan and Mikhail Aleshin left the track littered with carbon fibre. With the top seven having not stopped they had to do so under caution, losing all the advantage they’d gained in the opening laps.

Reigning champion Simon Pagenaud inherited the lead but Penske lacked their usual magic around the St Petersburg course and he was soon caught by Bourdais. Coyne’s new hiring thrilled the team by passing Pagenaud for the lead and cruising to victory. Dixon passed a host of rivals to join them on the podium but Power’s day was ruined for good when an engine problem forced him out.

Kris Meeke almost threw victory away in the final kilometre of the Rally of Mexico. The Citroen driver was leading by over half a minute when a bump threw his C3 off-course. He disappeared down a bank and into a spectator car park, where he took a brief detour through the vehicles before successfully relocating the course.

The rally began three days earlier in Mexico City’s Zocalo square with two super special stages. This caused significant problems, as an accident on the motorway between the capital and rally base caused a six-hour delay to the transporters carrying the cars, forcing the cancellation of Friday’s morning loop of stages.

Once the action got underway high altitude and temperatures caused problems for many of the front runners, leaving Meeke to build a small advantage over Sebastien Ogier and the three Hyundais. The latter challenge soon disintegrated however as all three i20 Coupes suffered near-simultaneous mechanical issues and dropped time.

Saturday was a relatively straightforward day leaving just Sunday’s final two stages. Proceedings ran without a hitch until Meeke, the final WRC runner on the course – had the drama which sent blood pressures skyrocketing in the Citroen camp. He made it to the line with 13 seconds in hand over Ogier and Thierry Neuville, who took the Power Stage win.

Brad Keselowski was on course to win his second race in a row when a late problem allowed Martin Truex Jnr through to win. Truex therefore swept all three stages of the third NASCAR race of the year.

But it was a last-lap collision between Kyle Busch and Joey Logano which made the headlines when Buch attacked his rival in the pits. NASCAR has not announced what if any action will be taken against either driver.