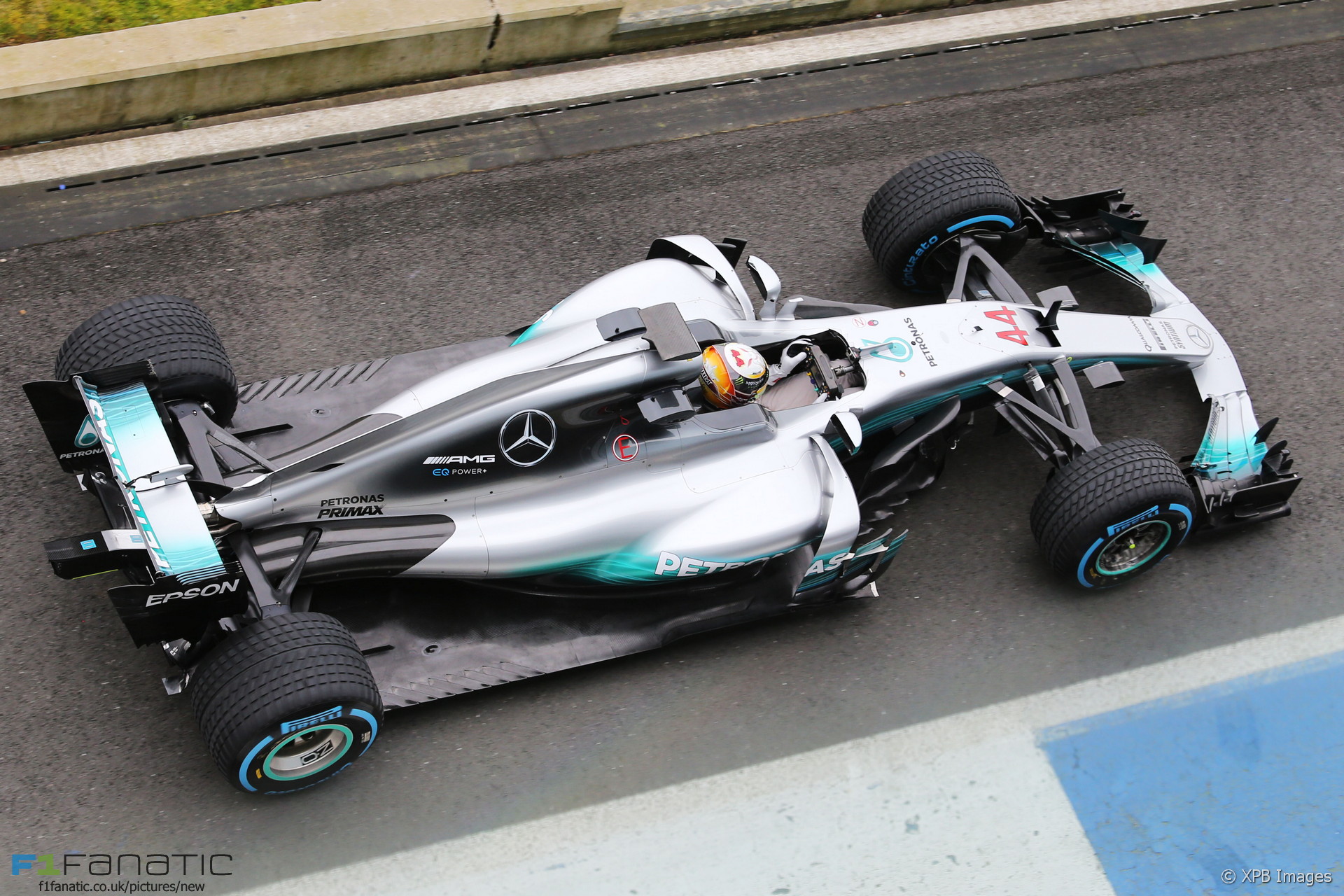 Today we got to see what the world champions have made of the radical new regulations for 2017.

The Mercedes W08 (or, to use its full title, the Mercedes-AMG F1 W08 EQ Power+) made its first appearance at Silverstone already showing a high level of aerodynamic refinement. There’s likely to be much more to come as well once it starts testing next week.

At first glance there isn’t much new going on about the front wing except that it meets the required 12.5-degree back-sweep. After a second glance you’d think exactly the same, and that’s because there really isn’t much new here (yet) – the cascade winglet has a new subtle mounting bracket to the end-plate and that’s just about it.

The nose, although similar to the 2016 car in stature, is another matter. Although the slender mounts have been outlawed for this year the camera pods remain in a similar position and sit upon almost identical vanes, only shorter. The S-duct is also a carry-over feature. Its design moves away from the simple exit slot utilised previously and instead follows what McLaren have been doing by embedding the car’s antenna in the middle and creating two deeper grooves.

Perforated bodywork already looks like being a strong theme in 2017. It’s used to create elongated vortices that influence the surrounding freestream flow. The turning vanes that hang from beneath the nose are split into four elements, each with their own footplate that are again divided into a total of seven individual aerofoils.

The conjoined front lower wishbone was a Mercedes staple piece during the hybrid era but this appears to have been redundant this year. It is there but not to quite the same extent. This is because the teams have more freedom to ‘twist’ the suspension arms this season, producing more desirable geometry from an aero standpoint.

There are mechanical changes too: the upper wishbone sits higher and the king pin taken off the hub entirely, creating a visible change to the steering axis. It will be interesting to see if this is changed during testing as the team gains more knowledge about the characteristics of the new, wider tyres. The increased height also clears the way for air to reach the new aero devices behind.

The primary bargeboard takes up almost all of the box area set out by the FIA and features a number of perforations along the base to help seal off the splitter behind. The ‘bat wing’ device that shrouded the ground-speed sensor has been ditched after three years and substituted with smaller turning vanes to assist the Y250 vortex’s journey down the car.

A large, beautifully sculpted vane towers above the bargeboards. This also fits in the regulatory region described above – expect to see these sorts of devices break out as the season progresses.

As the power unit regulations mature the engineers find them easier to cool sufficiently, and so the inlets can be reduced in size and drag decreased.

Most of the cars will be around 15cm longer than last year to manage the larger front tyre wake and take advantage of the larger floor. The W08’s sidepods have certainly extended and as a result the coolers inside can also be stretched and the bodywork squeezed in for less blockage.

Together with intricate bargeboards there are equally complex flow conditioners which straddle the car. These are composed of three elements and reach forward to deflect as much wake from the sidepod undercut as possible. Their curled undersides entice clean flow towards the rear where it can be used more effectively.

These are accompanied by new wing mirrors which appear to incorporate infrared cameras to monitor tyre temperatures. The team’s partnership with Qualcomm has produced a variety of data acquisition and transferring techniques during their recent dominance and perhaps this is another development.

Having finally got a proper glimpse of the 2017 diffusers it is clear that Mercedes have not held back in this area either. It complies with the rules yet already there are new ideas in view. Rather than a simple periphery flap the outboard sections have received, of all things, a bit of front wing treatment, featuring an extreme outsweep to further lure the air from underneath the car.

Having used scallop slots ahead of the rear tyres to displace turbulence away from the diffuser in recent years it is interesting to see Mercedes move to simple perforations for 2017 (albeit as many as nine of them).

The rear wing has a bow shaped profile – it is shallower at its tips than at the centre. This gives us some indication as to how aerodynamically balanced the car is, as the team doesn’t feel the need to go chasing maximum downforce at the expense of stability.

During the car’s second runs at Silverstone, while Valtteri Bottas was at the wheel, the W08 sprouted an additional narrow black wing between the rear wheels. This is within the box region of the shark fin so it would be legal. One possible use for this would be to control the wing tip vortices shed behind to reduce drag/back pressure.

The W08 ran without a shark fin but Mercedes haven’t ruled out the possibility of running one during the testing. The very low weight of this component makes it easy to justify adding if it aids the car’s aerodynamic stability.