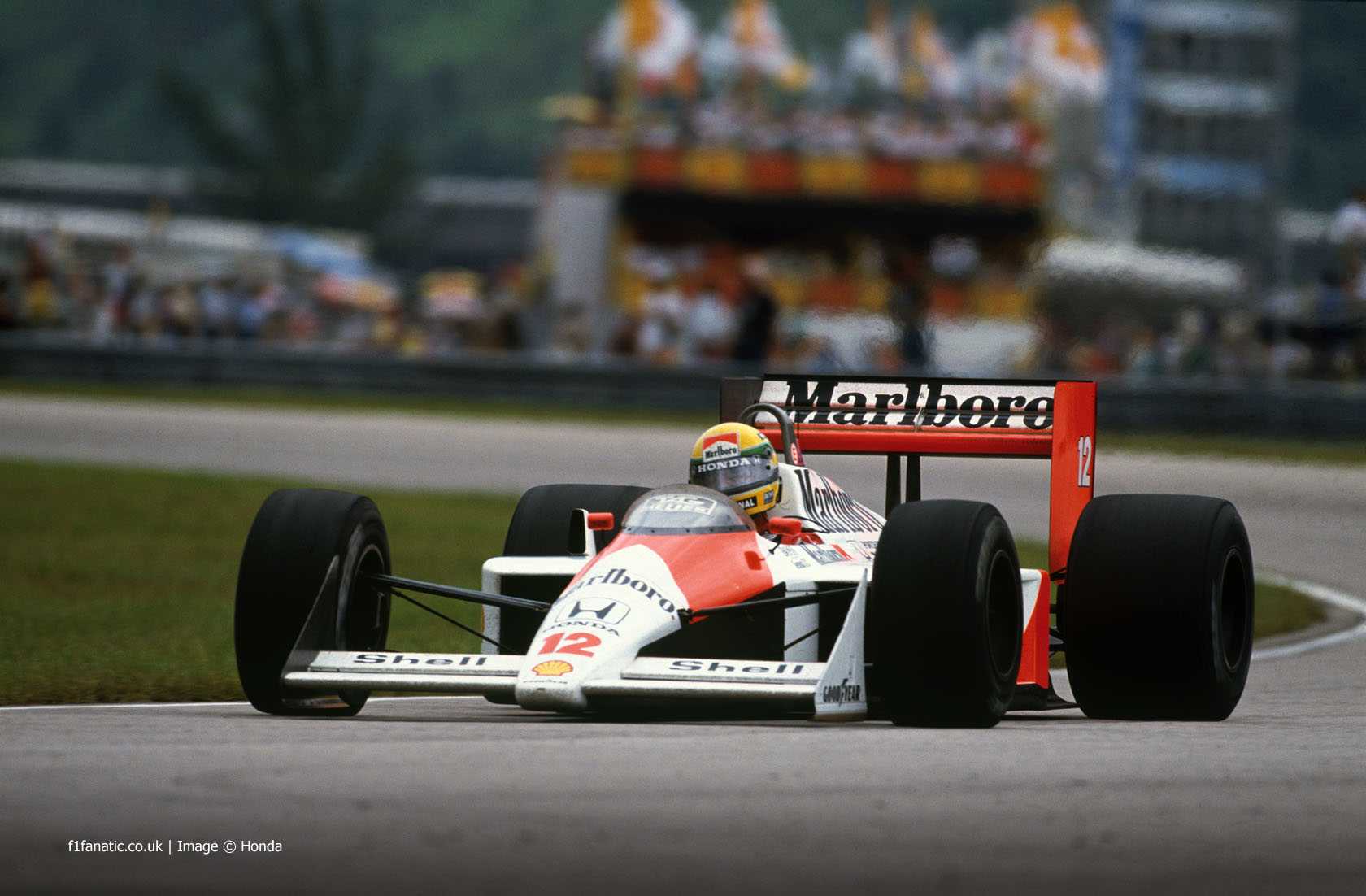 McLaren have broken with the past by dropping the naming system introduced by former chief Ron Dennis. Their 2017 car, which was going to be called the MP4/32, will now be the MCL32.

The last McLaren not to carry the ‘MP4’ designation was one to forget. Alain Prost and John Watson found Gordon Coppuck’s M30 an unwiedly beast with an alarming tendency to break suspension components.

But a new regime arrived in 1981 and change came at a revolutionary pace. Ron Dennis appointed John Barnard as technical director and gave him carte blanche to create a radical new car.

It was called the MP4. And it proved the first in a long line of successful McLarens.

The ‘MP4’ era began with the original MP4, later referred to as MP4-1. This pioneering car was F1’s first all-carbon-fibre construction. John Watson gave McLaren its first victory under Dennis at the 1981 British Grand Prix at Silverstone. Watson also famously demonstrated the crash-worthiness of carbon fibre to those who doubted the new construction by surviving a huge accident at Monza.

A ‘B’ version of the car was introduced the following year and won four races. The first went to Niki Lauda, just three races into his comeback. But it was Watson who took the title fight to the final round, ultimately losing out to Keke Rosberg’s Williams.

By the time MP4-2 arrived McLaren had replaced their normally-aspirated Cosworth engines with Porsche turbos, paid for and branded by TAG. Niki Lauda and Alain Prost won the drivers’ titles between 1984 and 1986 in these cars.

McLaren were taken by surprise when the FIA introduced new ruiles demanding flat-bottomed cars from 1983. Baranard and Porsche had planned to package their engine around the larger ground effect ‘tunnels’ used at the time to generate huge amounts of downforce.

Nonetheless when the new partnership hit the track it blew the competition away. The team set new standards in 1984 by winning 12 of the 16 races. But even that dominance would be eclipsed four years later.

McLaren and Honda proved a potent combination the first time around. Following Barnard’s defection to Ferrari Dennis lured Gordon Murray from Brabham to join Steve Nichols in creating on of the all-time great Formula One cars: The MP4/4.

With two of the sport’s all-time greats at the wheel, the rest needn’t have bothered turning up. Between them Prost and Ayrton Senna won 15 out of 16 races, and Senna became champion for the first time.

This was the beginning of a Honda-powered golden age for McLaren. The Japanese manufacturer successfuly introduced a normally aspirated V10 engine for 1989 in response to the banning of turbos and the team continued to have the championship battle to themselves.

But Senna and Prost fell out spectacularly and clashed at Suzuka, Prost claiming the title by driving into his team mate. He then left to join Ferrari, but 12 months later Senna reclaimed his title by using the MP4-5B in a manner which its designers had not envisaged: slamming it hard into the back of Prost’s car in Japan.

For 1991 Honda decided the V12 format was the way to go and produced another championship-winning engine. But this time the fight was closer than ever. Williams and Renault were an emerging force, and a mid-season hat-trick of wins for Nigel Mansell prompted Senna to push ever more urgently for Honda to improve its powerplant.

A bigger engine meant a bigger fuel tank and the consequent compromises in terms of aerodynamics: an area where Williams were making massive inroads with their Adrian Newey-honed FW14. To compensate for the substantial reduction in fuel weight during races McLaren introduced a cockpit-adjustable ride height control at mid-season.

It proved enough to tip the balance in Senna’s favour and he retained his title. But Williams were not to be resisted any longer: it was the beginning of a lean period for McLaren.

In between Honda’s departure at the end of 1992 and the arrival of Peugeot as their new engine manufacturer in 1994, McLaren enjoyed a surprising successful 1993 campaign despite using customer Ford Cosworth engines. These weren’t even top-spec units: those went to Benetton.

Senna, fuming at Prost’s veto on his attempts to get into a Williams, was persuaded to sample the MP4/8. He was dubious about the team’s chances without a manufacturer engine but after a single flying lap in the car he pulled in to tell Dennis “this engine’s amazing”.

The car was quite a piece of kit too, employing active suspension and a wealth of soon-to-be-banned electronic driver aids. In Senna they arguably had the one driver who needed them less than anyone, but even McLaren must’ve been surprised to see him still leading the championship six races in. It couldn’t last against the might of Williams, but by the end of the year he’d taken a remarkable five wins.

McLaren ditched the hopeless Peugeots quickly but showed more patience with Mercedes, finally taking their first win together at the beginning of their third season. The following year the arrival of Newey plus a major overhaul in the technical regulations and a well-timed change of tyre supplier put McLaren back on top.

The MP4-13 was far from unlucky: Mika Hakkinen won first time out in it after David Coulthard charitably waved him past following a pit stop mix-up. Even the controversial banning of a novel braking system didn’t put the team off their stride, though Michael Schumacher staged in contention until the final round.

A key part of McLaren’s 1998 advantage was taken away when Goodyear withdrew from the sport, leaving all the team’s rivals to join them on Bridgestone rubber. Nonetheless by painstakingly optimising every area of the car Newey produced a machine was a clear step forwards from its predecessor, albeit with a far smaller ‘sweet spot’ when it came to setting the car up.

What’s more, Ferrari were an even greater threat. McLaren’s 1998 haul of nine wins was reduced to seven, and without Schumacher’s mid-season crash Hakkinen would have faced a stiffer test to hold onto his title.

In the early 2000s McLaren, Mercedes and Newey went to radical lengths in their pursuit of the dominant Ferraris. One especially aggressive design, the MP4/18A of 2003, never made it to a race track as its extreme cooling proved a compromise too far.

However a refinement of the ideas behind the car gave the team the breakthrough it was searching for two years later. The MP4-20 won ten races in 2005 – two more than any other car – but niggling reliability problems allowed Renault in to take the constructors’ championship while Fernando Alonso beat Kimi Raikkonen to the driverss title.

McLaren began 2008 under a cloud. The team had been fined a stunning $100 million after the FIA ruled it had used stolen intellectual property from Ferrari the year before. The MP4-23 was scrutinised by the sport’s governing body for any further evidence of gains gleaned from their rivals, and was passed.

Lewis Hamilton then won first time out with it in Australia, putting him on course for the world championship. In the final year before tight new restrictions on aerodynamics, the MP4-23 displayed some of the most intricate bodywork F1 has ever seen.

After a scintillating final race in Brazil, Hamilton denied Ferrari’s Felipe Massa the title by a single point. It remains the last championship a McLaren driver has won to date.

And if there is ever going to be another, it won’t be at the wheel of an MP4.