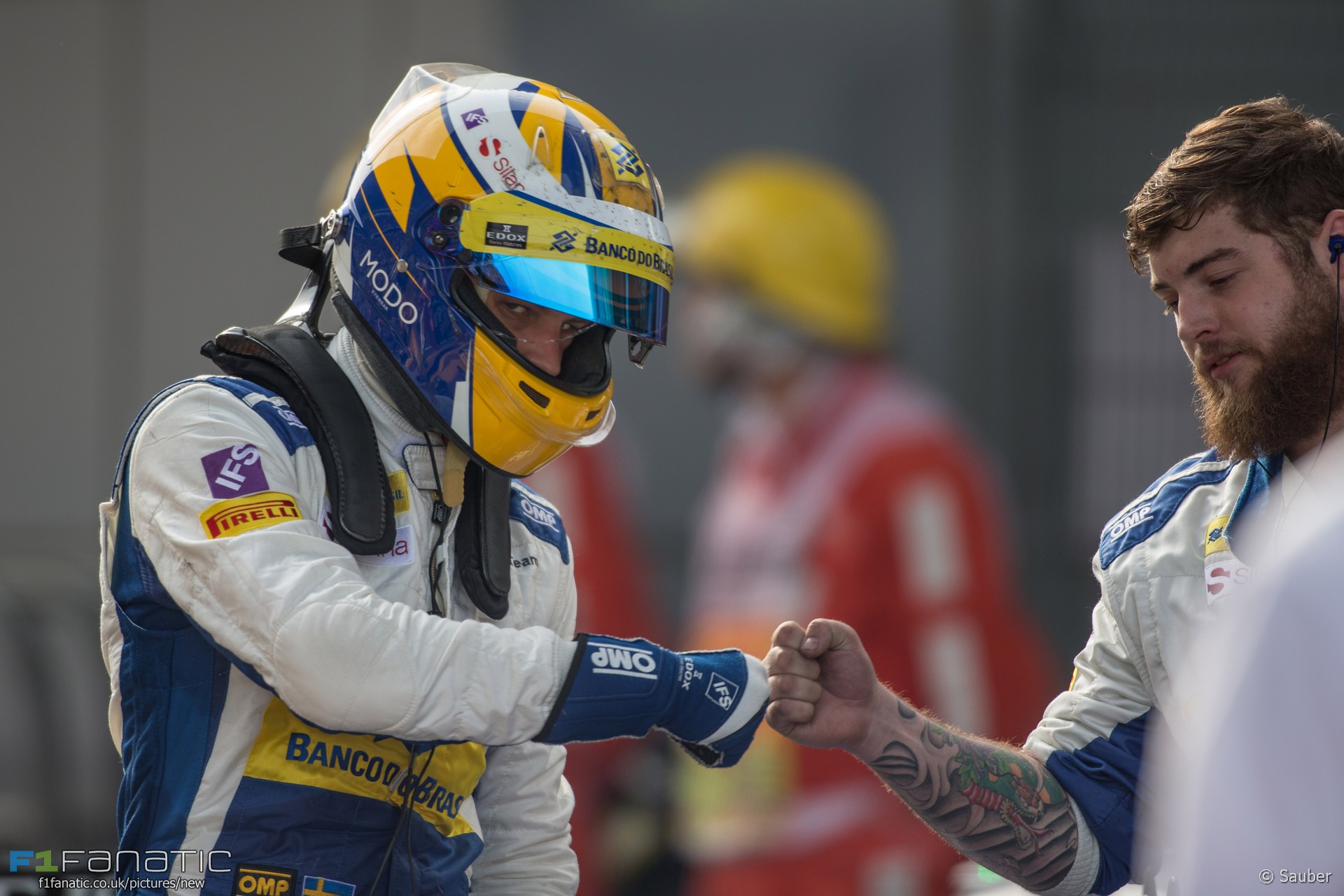 Sauber were in a tough situation at the beginning of 2016 and Marcus Ericsson didn’t always make things better.

When your team is low on funds, crashing the car in two consecutive qualifying does not win many friends. Particularly when the shunts are heavy enough to require a pair of chassis rebuilds, as was the case for Ericsson at Silverstone and the Hungaroring.

Monaco had been even worse. While bearing down on Felipe Nasr Ericsson was frustrated to discover his team mate was not responding to the pit wall’s instructions to move out of the way. He took matters into his own hands and the pair collided.

The pair had already had a near-miss a few weeks earlier in Spain. And again later in the season Ericsson found himself stuck behind his unco-operative team mate in Mexico. This time Nasr, after some cajoling, allowed him by.

By this stage in the season things were looking better for team and driver. Sauber had received an injection of capital from Longbow and Ericsson was revelling in the first updates to trickle through for the C35.

Having climbed to 11th in Singapore and the USA but fell back before the flag, Ericsson was holding the place in the final laps in Mexico, desperately hoping someone ahead would drop out and hand the team a badly-needed point. It didn’t happen, to his obvious disappointment.

At the rain-soaked race in Brazil which followed Ericsson gambled on an early switch to intermediates in an attempt to make ground, But it backfired badly when he aquaplaned into a wall and it was his team mate who delivered the team’s only points of the season.

It made for an unfortunate verdict on Ericsson who, despite his earlier incidents, had been the more impressive driver over the course of the season.

Despite not getting the all important points, he did outperform Nasr usually, and given how poor his 2014 was, will be interesting to see how he does if Sauber can get into the points on a few occasions. Has to prove he isn’t just a backmarker driver.
@Hugh11

What’s your verdict on Marcus Ericsson’s 2016 season? Which drivers do you feel he performed better or worse than? Have your say in the comments.

Australia – Ran little in practice but did a better job than Nasr in qualifying, almost taking his Sauber into Q2. A tyre problem forced him to retire from the race.

Bahrain – Felt happy with his set-up but wasn’t able to make the cut for Q2 and lined up behind Wehrlein. Said a power loss restricted him on the opening lap, and was preoccupied with saving fuel at the end of the race.

China – At a track where the C35 was more competitive Ericsson led the team’s charge in qualifying, reaching Q2 and taking 15th. Tried to use two medium tyre stints to break into the points but didn’t have the pace despite a clean race.

Russia – Ran through a range of set-up tweaks as he searched for a balance on Friday but ended up almost a second off his team mate. It got no better on Saturday, where he qualified last. Felt his car was better on high fuel but despite a trouble-free race he finished well outside of the points.

Spain – Unsettled in the car in Friday, Ericsson felt he made significant progress overnight but couldn’t get the Sauber above 19th. Rated his race as one of his best in F1 so far after using a three-stop strategy to come home nine seconds ahead of his two-stopping team mate. The pair almost tangled at one point, however.

Monaco – Missed the cut for Q2 by a mere four-hundredths of a second. In the race he made an early change to slick tyres and struggled for pace at first which allowed Nasr ahead of him. Nasr appeared to go through the same phase and was quickly caught by Ericsson. The team ordered Nasr to let Ericsson past but he refused. Ericsson then took matters into his own hands but a clumsy passing attempt at Rascasse put both Saubers out.

Canada – Said he was “not fully satisfied” with the car after Friday practice and although he out-qualified his team mate his penalty from Monaco left him at the back of the field. Almost had the pace to get in front of Grosjean in the second half of the race but narrowly fell short.

Europe – Quick work by the Sauber mechanics between first and second practice to change Ericsson’s engine meant he didn’t lose too much time. He admitted over-driving in qualifying and ended up 20th on the grid. In the race he found his tyres were going off more quickly than expected and had to make two pit stops, and at the flag he had only Haryanto’s Manor behind him.

Austria – Pipped Nasr in qualifying and by avoiding a yellow flag speeding penalty moved up to 18th. The race was a long grind, however: struggling with his front tyres he slipped to last at one stage and finished a distant 15th.

Britain – Ran Sauber’s first upgrade of the season on Friday but smashed the car up against the barriers at Stowe in the drying third practice session. The team rebuilt a car for him and he took the start, still sore from his accident, but a loss of power forced him out early on.

Hungary – Had his second crash in as many racing Saturdays which forced him to start from the pit lane. He got stuck behind Nasr early on but as the Manor driver was one-stopping Ericsson easily moved ahead. His pace wasn’t on a pair with his team mate’s, however, and an over-ambitious tyre-gamble meant a fourth pit stop which left him behind Wehrlein.

Germany – The main positive of the weekend was being able to use the team’s new rear wing in the race. However the two Saubers qualified on the back row and Ericsson brought up the rear. He battled with Haryanto after passing him at the start but never got on terms with the other Manor, finishing behind it.

Belgium – There was just a tenth of a second – but three places – between the Sauber drivers after Q1. Ericsson was on the wrong side of the divide after a power unit problem. A gearbox fault then ended his race.

Italy – Was disappointed with his qualifying run after picking up oversteer after final practice. He ran a one-stop strategy in the race but didn’t have much pace on mediums at the end and couldn’t keep Sainz behind.

Singapore – Power unit problems led to an engine change in practice, but in qualifying he was Sauber’s only representative in Q2. A decent start got him up to 11th place but Sauber took the surprising decision to sacrifice that track position as early as lap nine, committing Ericsson to a three-stop strategy, and he lost too much time in traffic as a result and was even beaten by one of the Manors.

Japan – Disadvantaged by yellow flags in second practice which spoiled his qualifying simulation, but beat Nasr in qualifying. His own description of his race as “decent” seems fair: he was more consistent than his team mate and finished comfortably ahead.

Malaysia – Headed Nasr on the grid but both dropped out in Q1. He endured a tough race after his water bottle failed on the first lap in one of the hottest grands prix of the year. He was happier with his car’s pace in the race, but finished out of the points in 12th.

United States – Said he wasn’t confident in the car but nonetheless made it through Q1. He ran as high as 11th late in the race after gambling on a one-stop strategy in the hope of but was passed by Kvyat and Ericsson.

Mexico – Clearly much happier with the car than Nasr in qualifying, producing a fine lap to reach Q2. After first-lap contact with Wehrlein he pitted and ran the same strategy as Palmer, but impressively finished one place outside of the points in 11th.

Brazil – Only did a single lap in final practice due to a power unit problem. Nonetheless he beat his team mate in qualifying by a few hundredths. However in the race he quickly paid the price of trying to run the intermediates – he crashed within two laps of putting them on.

Abu Dhabi – Both Saubers were behind the Manors on Friday and Ericsson admitted they were having difficulty getting the ultra-softs to work. An error on his final lap left him last on the grid. After being forced wide by Magnussen at the start a mammoth, 38-lap stint on soft tyres saw him rise to 11th. But he inevitably began to lose ground and though his eventual pit stop did get him ahead of his team mate there was only one other car behind them at the flag.