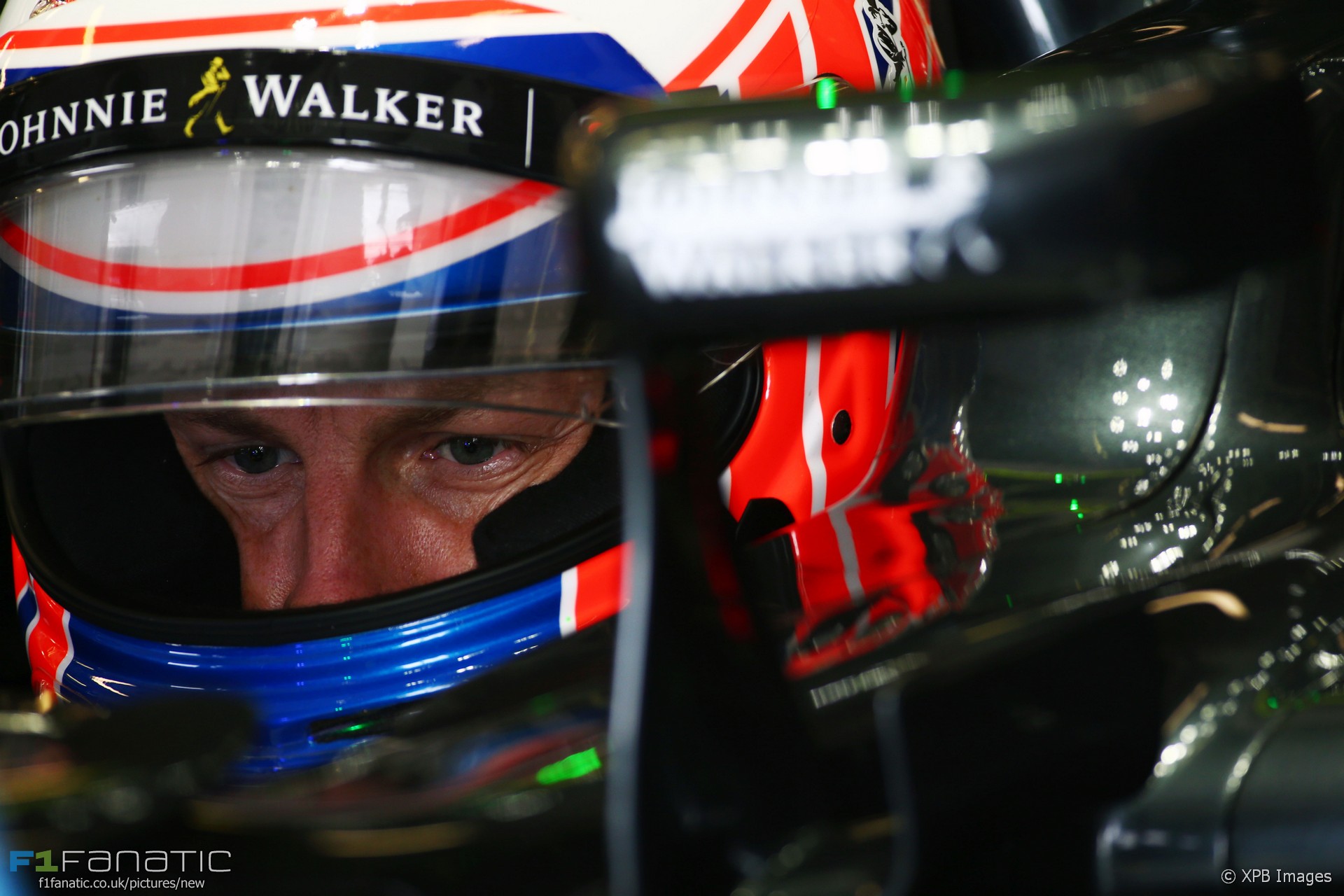 On the face of it Jenson Button has chosen the right time to hang up his helmet. Only a few times during the 2016 campaign did he produce the kind of performances expected of a world champion.

Among these high points was Austria, where for half-a-dozen laps we were treated to the rare sight of a McLaren holding a legitimate second place. Button reached the position courtesy of a top-drawer qualifying effort on a damp track and went on to bring his MP4-31 home third.

A battling drive to eighth in Germany – having suffered an unusual eye injury during practice – and a recovery run to ninth in Austin were other examples of Button at his best. But it was an otherwise frustrating season for Button while Fernando Alonso claimed the lion’s share of the team’s points.

Five technical retirements, which was the most of any driver and more than twice as many as his team mate, further limited his points-scoring opportunities. The most galling was in Bahrain where the Honda failed while he was following Max Verstappen, who went on to finish sixth. It also meant Stoffel Vandoorne scored a point before either he or Alonso did.

Technical problems occasionally stymied his qualifying efforts too, notably in Canada and Britain. But there’s no getting away from the fact Alonso comprehensively out-played Button in this respect.

The 2009 champion lost the qualifying battle 15-4 and dropped out in Q1 five times to Alonso’s two. Unusually for Button errors began to creep in, notable on the streets of Baku and Singapore.

Having revealed his plans to step down at Monza, Button seldom managed to beat his team mate over the remainder of the year. The nadir was a baffling weekend in Brazil where he admitted to being at a loss to understand his car’s handling in wet or dry conditions.

His dejection at dropping out of his final race with a suspension failure early in the running was obvious. But it’s equally clear Button realised the time to step down has come.

First half of the season was pretty good, with Austria one of his best weekends ever, but Alonso was better even until then. After the announcement he really said goodbye and I’ll miss him, but it’s good to see he won’t be dragging on forever.
@Hunocsi

What’s your verdict on Jenson Button’s 2016 season? Which drivers do you feel he performed better or worse than? Have your say in the comments.

Australia – Button found himself snookered when McLaren took the curious decision to put him on super-softs from the restart. They lasted 12 laps before he pitted for a set of mediums on which he made little progress against other cars on the same rubber, with the exception of Nasr who he passed for 14th.

Bahrain – An encouraging third-quickest for McLaren on Friday only translated into 14th place on the grid. But the race was a case of what might have been: he was running within DRS range of Verstappen, who went on to finish sixth, when the Honda power unit failed.

China – One of few drivers to start the race on new super-soft tyres, Button headed for the pits when the Safety Car came out but lost time behind Hulkenberg. Like Alonso he couldn’t find the necessary pace on mediums, so he tried a run on super-softs at the end but still ended up following his team mate home.

Russia – Eighth on Friday, Button reckoned Q3 was possible for the team, and although he didn’t make it he was within a tenth of a second at a track which wasn’t ideal for the car. He didn’t get away well and was immediately passed by Alonso, falling to 15th. From there he climbed into the points, passing Sainz for the final place in the top ten.

Spain – Troubled by a loose rear on his car in qualifying and didn’t join Alonso in the final ten. However a rapid start put him in the hunt for points. Although he still found the car lacking grip he delivered nine place, passing Gutierrez close to the end.

Monaco – Two-tenths down on Alonso in Q2, Button started 13th. Despite struggling with constant rear locking he made a typically gutsy early switch to intermediates but was thwarted by Wehrlein running long on wets. He made the switch to slicks early as well and that lifted him ahead of Gutierrez and up to ninth at the flag.

Canada – Power unit problems in qualifying left him without the latest hardware in the race. His old unit then packed up, making this a wasted weekend.

Europe – His first qualifying effort went awry when he skidded off at turn 15 and his second was spoiled by traffic. The upshot was he failed to make it beyond Q1. However he started well, moving up to 15th as he passed several rivals on the outside of turn one, and jumped Nasr at the first pit stop to get on Alonso’s tail and ultimately deliver the result his team mate would have had.

Austria – Despite his Q2 slip-up Button grabbed a place in Q3 and then performed some of his trademark damp-track magic to qualify fifth ahead of both Red Bulls, the Williams pair and Raikkonen’s Ferrari. Penalties for other drivers then promoted him to third, and the surprises continued in the race when he moved up to second at the start and stayed there for six laps. He inevitably slipped back but sixth place was a fine result.

Britain – A rear wing problem kept him from making a second run in Q2 and he was knocked out by Kvyat. His pace was on a par with Alonso’s in the tricky conditions but the Honda’s lack of grunt kept him stuck behind Bottas in the second stint and lost him a place to fresh-tyred Massa towards the end.

Hungary – Might have out-qualified Alonso had it not been for the yellow flags which appeared after his team mate’s mistake. His race was ruined by multiple technical problems and, to make things even worse, a penalty for receiving assistance on the radio.

Germany – Had to visit hospital due on Friday to have some debris removed from his eye, but despite that setback he qualified ahead of his team mate. A rapid start moved him up to ninth place and impressively he had gained another position by the end of the race. Button eked out better tyre life on the super-softs than Alonso managed in the closing laps and grabbed an excellent eighth when Bottas hit trouble.

Belgium – Was very pleased to reach Q3 and split the Williams drivers in qualifying. He got away from the line well but was held up at La Source and slipped to 12th, and was then rammed out of the race at Les Combes by Wehrlein.

Italy – Wasn’t entirely happy with his run in Q2, admitting “Fernando pulled out a little bit on me”. He was elbowed wide on lap and dropped to the back of the field from where he did well to recover to 12th at one of McLaren’s weaker tracks with better pace than Alonso after the first stint.

Singapore – Clipped a barrier during Q2 and picked up a puncture which ended his bid for a place in the top ten. He got caught up in the Hulkenberg crash at the start which broke his front wing and left him with other damage which couldn’t easily be repaired. Rising brake temperatures later forced him out.

Japan – Friday set off alarm bells about the car’s performance, though the team had suspected they would be particularly weak at Honda’s home circuit. The team hadn’t planned to fit Button’s new power unit this weekend, but he wanted them to do it on Friday evening. After he went out in Q1 the new unit was put in for the race, meaning he started last. He couldn’t make any progress with the hard tyres on his car initially, but two stints on softs got him up to 18th, setting the ninth-fastest lap on the way.

Malaysia – Frustrated by traffic in Q1 but a fine effort in the subsequent sessions gained him a place in Q3 and put him ahead of Massa’s Williams, which was a bonus. He briefly held fourth on the first lap before others passed him. But while the VSC made Alonso’s race it spoiled Button, costing him the chance to claim positions back from the three-stop runners. He deserved to finish higher than he started.

United States – Was very unhappy at dropping out in Q1 after doing his first run on softs, meaning his final effort on super-softs would be decisive, only to be held up by Palmer. Starting on super-soft tyres looked like a bold move but he gained places on lap one and then passed Gutierrez for good measure. It was somewhat inevitable that Perez would come past him by the end of the race, but ninth was a fair reward.

Mexico – Made a breakthrough with the car’s set-up on Friday but was still struggling to get the tyres working in qualifying. The result was clear to see in his sector times: much of the gap to Alonso was at the beginning of the lap where his tyres were still coming in. Sunday was better, his opportunistic pass on Sainz one of the race’s best, but he spent most of the time stuck behind other cars.

Brazil – This was a horrible weekend for Button with no obvious upside. Having been tenth in the warmer conditions on Friday he dropped out in Q1, prompting him to claimed “there’s definitely something not right”. He was still mystified after coming in last in the race.

Abu Dhabi – A power unit glitch forced an early halt to his running in first practice and delayed his start to the second session while the unit was replaced. In qualifying he found himself needing ever more front downforce but ran out of wing angle and dropped out in Q2, complaining of the inevitable understeer. His race ended early after he clouted a kerb and his suspension broke.