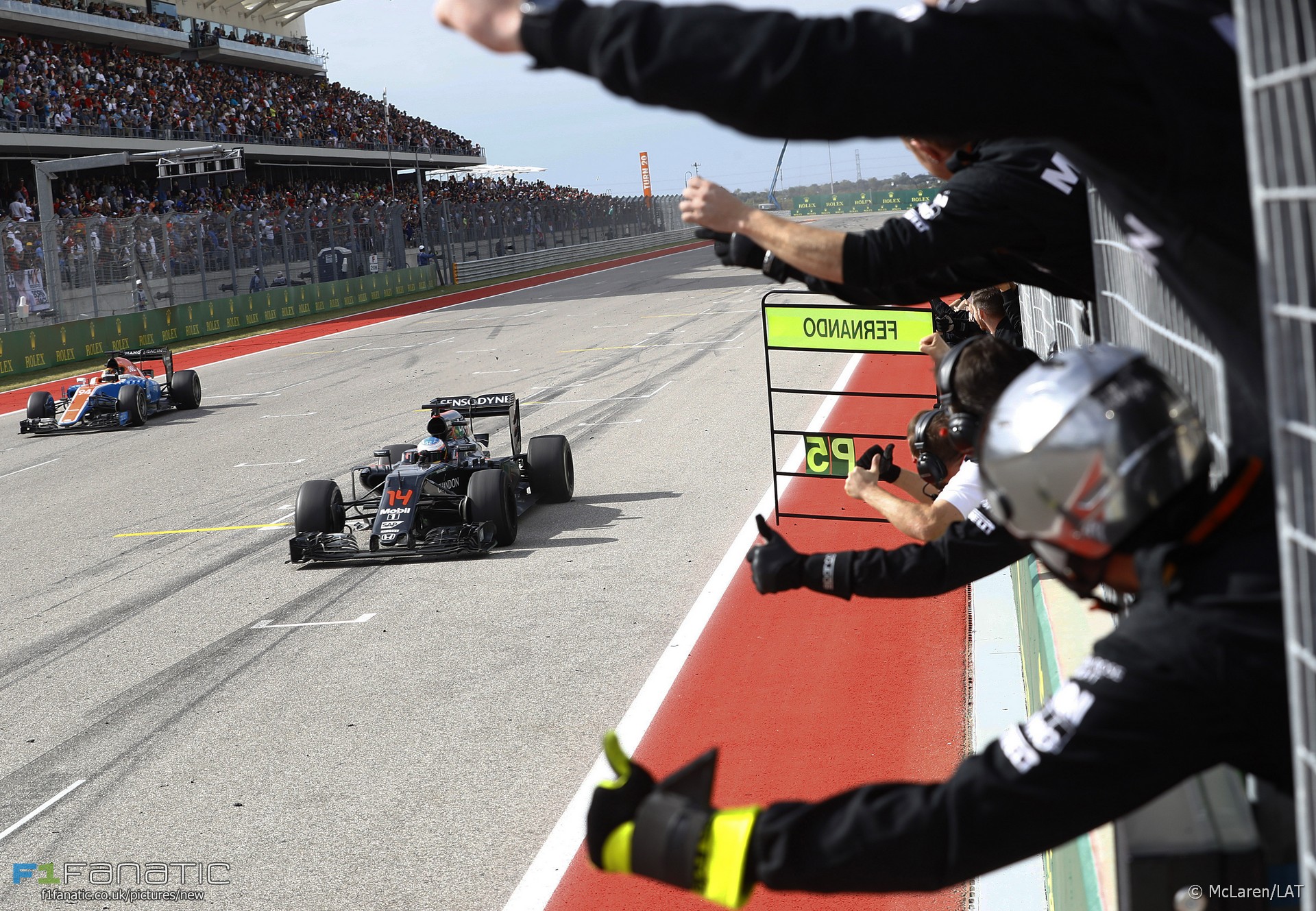 Fernando Alonso narrowly beat Carlos Sainz Jnr in the United States Grand Prix Driver of the Weekend poll – just as he did in the race.

This was Alonso’s third win in the past six races, taking 43.6% of the vote, while Sainz has never previously been voted Driver of the Weekend.

Despite strong practice pace, McLaren struggled in qualifying with Alonso their highest starter in 12th place in a car he later stated wasn’t quick enough to make Q3.

Nonetheless he made the most of fresh tyres at the start and took the outside line at turn one – avoiding the Vettel-Hulkenberg-Bottas clash – to move into the points places. He spent the race hunting down Sainz until Massa fell back during the VSC to split the pair.

This inspired Alonso, and after first barging Massa out of the way he later eased past Sainz to score a solid fifth place.

Pace above better cars and awesome overtaking, showing why he is still the best.

Honourable mention to Carlos Sainz, holding a much faster Williams with worn soft tyres to get sixth with a Toro Rosso.
Mocho_Pikuain

Alonso had another one of his good starts to move up the field and then managed to finish fifth with some forceful overtakes late on.
PJA (@pja)

Yet while there was a considerable amount of praise for Alonso, most comments were from people who hadn’t voted for him – all for the same reason, though he did receive some support.

Alonso manhandled Massa; if Verstappen had done what Alonso did there would be more fuming at the next drivers briefing.
Bart

Fair play to Alonso for his finishing result, I just don’t like how he got it. He drove a driver off the track and made a mockery of the track limits.
Philip (@philipgb)

And Alonso, well, he took advantage of the lack of enforcement of track limits (and why shouldn’t he?) but his last few laps showed him at his aggressive best.
hyoko

Sainz was clearly voted in second place while Lewis Hamilton and Sergio Perez were the only other drivers to receive more than 1% of the vote.

Sainz had a great qualifying, gained places as he avoided trouble at start, lucked into a favourable position by pitting under VSC and then held off faster cars for a long time until finally running out of tyres.
John Beak (@johnbeak)

Going through Q3 and qualifying tenth was outstanding, but finishing a solid sixth really was impressive in a car that’s under-developed with a 2015 engine.
Jayfreese Knight (@jeff1s)

Hamilton He was flawless all weekend from the first press conference.
Jureo (@jureo)

Perez did well to recover from being speared into oblivion by Kvyat.
Hugh (@hugh11)

Interestingly this vote was in stark contrast to FOM’s driver of the day poll which was won by Max Verstappen, despite the Red Bull driver misjudging a pit stop and not finishing the race. Less than 1% of F1 Fanatic readers agreed with FOM’s poll.

I am a massive Verstappen fan but DOTD was obviously either Sainz or Alonso this weekend. They might as well get rid of it all together this way.
Arnoud van Houwelingen

2016 Driver of the Weekend winners