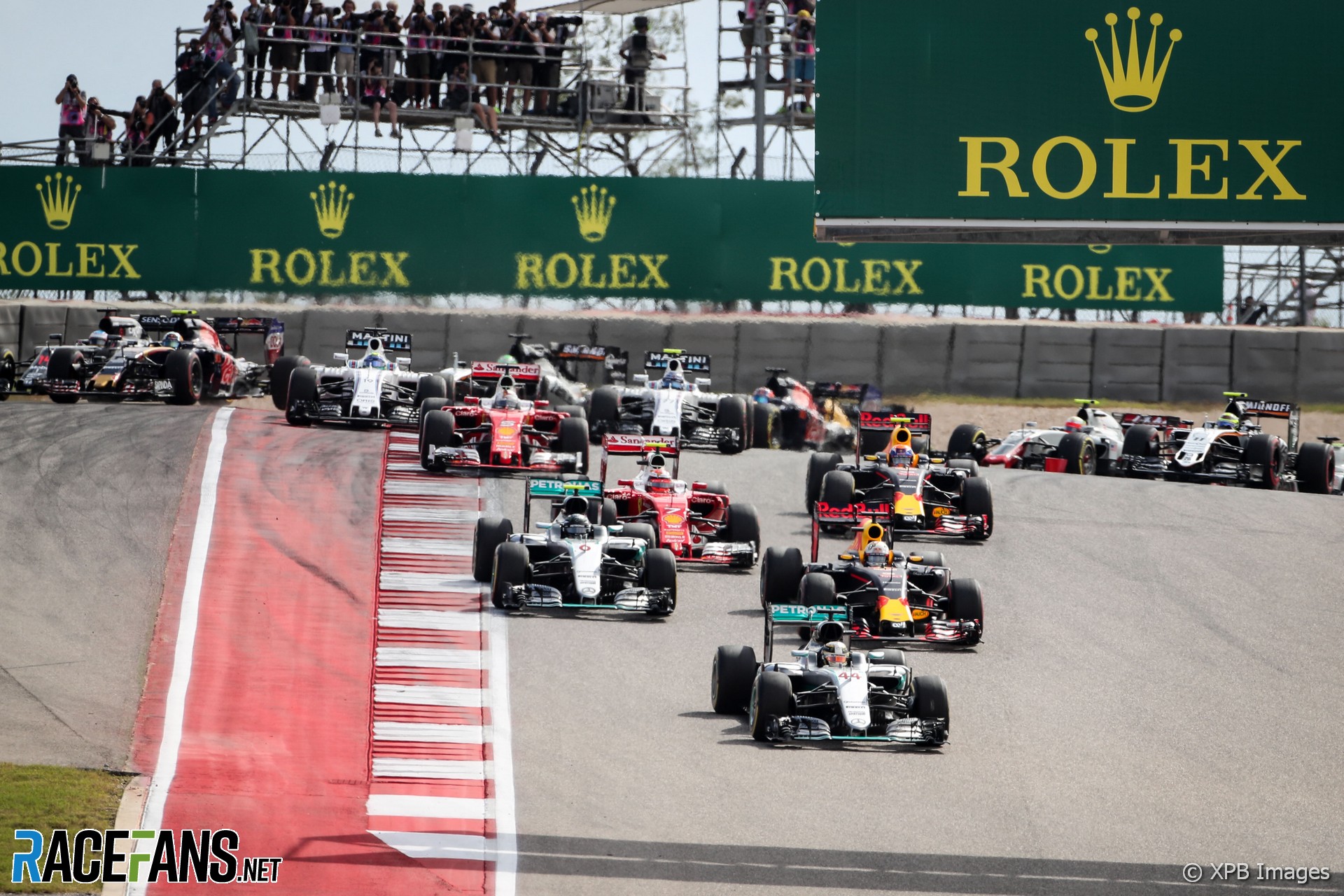 Lewis Hamilton responded to the trials of Sepang and Suzuka in emphatic fashion at the Circuit of the Americas, winning a race he never looked like losing.

The 31-year-old Briton has a deep affection for the United States and it continues to repay him in kind. Of the six occasions he’s raced in America he’s now won five times, four of which have come at Austin’s superb modern F1 facility.

But the damage he was able to inflict on Nico Rosberg’s championship lead was negated by a stroke of fortune for his team mate.

Ricciardo gets Rosberg at the start

Reliability aside, starts have been the other great grievance of Hamilton’s 2016 championship campaign. Having only converted pole position into the lead from a standing start twice this season prior to Sunday, the pressure to get it right this time was immense.

Hamilton had laboured long at the Mercedes factory to get away cleanly, and he did. The number 44 Mercedes captured the inside line for turn one, obliging Rosberg to use the outside line, and opening the door for Daniel Ricciardo to take advantage.

With both Mercedes drivers starting on the soft tyres, Ricciardo’s super-soft-shod Red Bull was ideally placed to out-drag Rosberg on the plunge towards turn two. Behind him Kimi Raikkonen used the same advantage to pass Max Verstappen, while Sebastian Vettel followed the pair of them.

The immediate question was how long the super-soft tyres would last. The answer came as early as lap eight when Ricciardo headed for the pits. Crucially, most of his rivals reacted to that move.

Knowing Rosberg couldn’t jump Ricciardo at this first stop, Mercedes put him on medium tyres in the hope of extending his middle stint and giving him better-performing tyres at the end of the race. He came in two laps after the Red Bull and Hamilton the lap after that, the race leader sticking to the preferred strategy of two stints on the soft rubber.

Raikkonen had followed Ricciardo in on lap eight, and as Verstappen stopped on the next lap he emerged behind the Ferrari. Raikkonen had to pass Jenson Button and did so in the DRS zone approaching turn 12. But Verstappen wasn’t that patient when he came to do the same. Improbably, he sliced up the inside of the McLaren entering turn six, and pressed on in pursuit of Raikkonen.

By lap 13 he was with his rival and approaching turn 12 Verstappen jinked his car to the left, braked deep and late and took the Ferrari. Now Vettel, who had stayed out later than the other front runners, finally made his pit stop, so the order was Hamilton from Ricciardo, Rosberg, Verstappen and the Ferraris led by Raikkonen.

Verstappen had to be restrained from going after Rosberg too aggressively: he was over-taxing his tyres and the pursuit of the Mercedes looked optimistic. Verstappen was game, however, telling his team on the radio he wasn’t content to settle for fourth.

Ferrari aimed to gain Raikkonen’s place back with a three-stop strategy, which they converted to on lap 24 by bringing him in for a set of super-softs. Soon afterwards Red Bull told Verstappen to up his pace, but he mistakenly believed he was being called in and pitted.

He lost around 12 seconds while the team scrambled to ready tyres for him. And soon after he went on his way came a fresh blow: his car jammed in gear at the far end of the circuit, the Red Bull rolling along at pathetic speeds as his rivals screamed by.

This was a double dilemma for the team, as Ricciardo had already made his final pit stop from second place. If Verstappen triggered a Virtual Safety Car period by parking that would allow Rosberg to make his final stop while losing less time and keep his place ahead of Ricciardo.

Despite the team’s efforts, this is exactly what happened. Verstappen parked close to an access point but found he couldn’t put his car into neutral, allowing it to be quickly cleared away. The VSC was therefore initiated, Rosberg headed for the pits and Mercedes, knowing he would easily come out in front of Ricciardo, could even afford to put him on another set of mediums.

With that the contest for the podium places was finished. Raikkonen’s race ended in the most humdrum of ways when the team fluffed his pit stop, allowing the car to drag a wheel gun with it, and had to tell him to stop as the wheel hadn’t been attached properly. They were fined $5,000 for the error.

That left Vettel in an unchallenged fourth place. Despite their bad experience with Raikkonen, Ferrari risked another pit stop for Vettel to put him on super-softs for the final three laps. Unsurprisingly, the fastest lap went to him by almost two seconds.

A tense scrap for fifth place provided great drama over the final laps. Carlos Sainz Jnr, who worked wonders on Saturday to get his underpowered Toro Rosso into the top ten, had also benefitted from the VSC and got ahead of Felipe Massa. While he tried to balance his desire to pass Sainz with the need to score points towards Williams’ constructors’ title fight, he had the added complication of Fernando Alonso edging closer in the McLaren.

The straight-line speed advantage of Massa’s Mercedes engine ruled out an attack at turn 12 from Alonso, so he got creative. An opportunistic lunge at turn 15 go him inside the Williams, and as Massa turned in the pair made contact and ran wide. Alonso claimed the place, and the stewards later ruled it had been a racing incident.

But Alonso wasn’t done. His next target was Sainz who, knowing the Honda is now at least a match for his year-old Ferrari power unit, reckoned it was inevitable Alonso would get through. Even with the benefit of DRS Alonso ran wide at turn 12 as he prised fifth from Sainz’s hands. Nonetheless the Toro Rosso driver was justifiably jubilant to equal the best result of his career.

Massa had enough of an margin for his deflating front tyre not to cost him seventh place. Sergio Perez limited the damage for Force India after team mate Nico Hulkenberg tangled with Valtteri Bottas on the first lap.

Perez had also been assaulted from behind by Daniil Kvyat at the start, the Toro Rosso driver copping a penalty for his error. Kvyat was the beneficiary of another penalty, however, as Kevin Magnussen was docked five seconds for overtaking Kvyat off the track. However Kvyat remained point-less after being promoted to 11th behind Button and Romain Grosjean, the latter snagging a point for Haas in their home race.

As Hamilton’s rivals gave him nothing to worry about he instead spent the race fretting over his power unit. But unlike in Sepang it held until he claimed his 50th grand prix victory.

But while Hamilton won the battle of Austin he’s still losing the war. Despite taking his seventh victory of the year he remains more than a win’s-worth of points behind Rosberg.

And now there are only three races left.