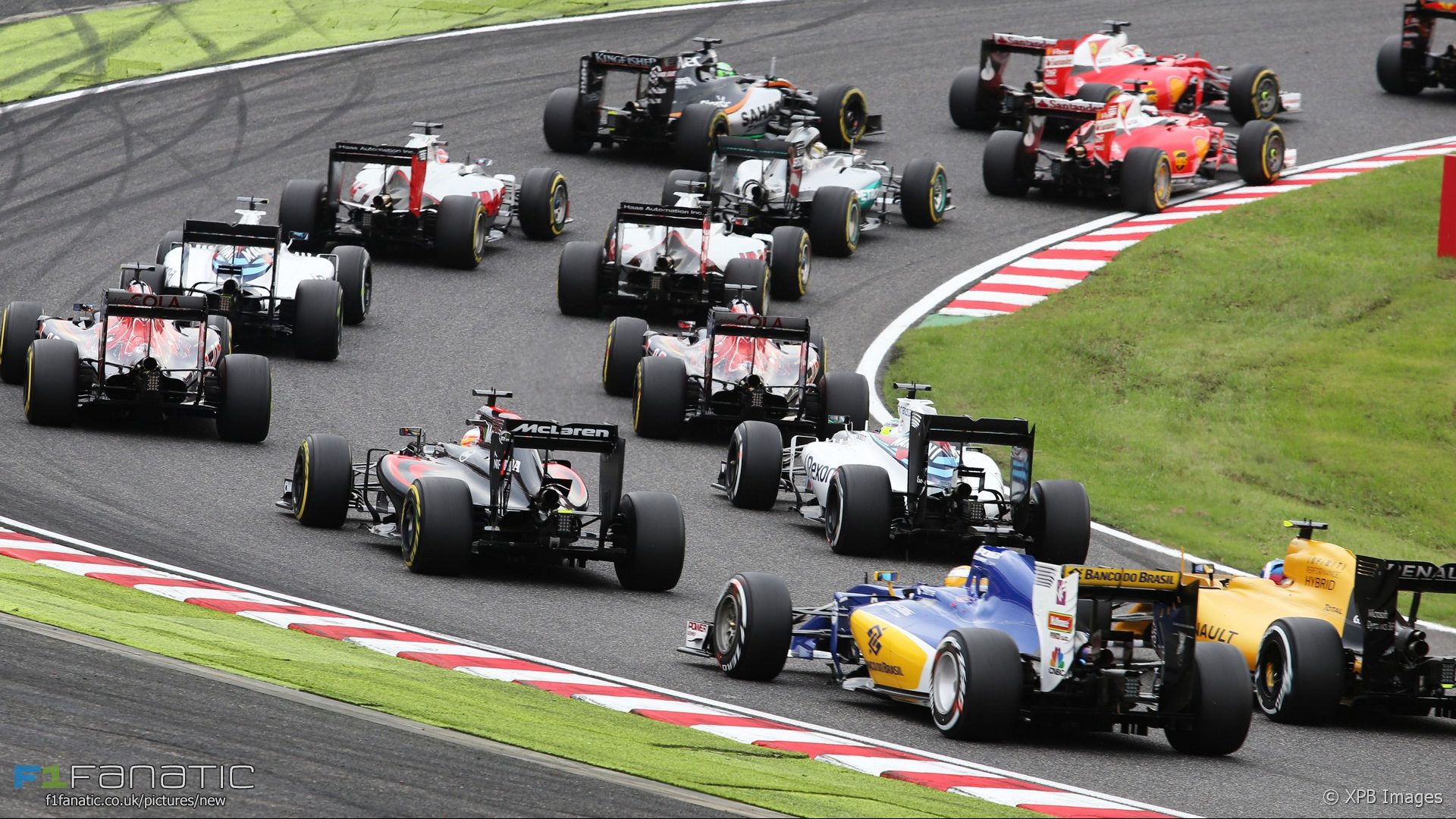 All 22 drivers finished the Japanese Grand Prix but some fared better than others. Here’s F1 Fanatic’s verdict on the entire field.

Lewis Hamilton – Mere hundredths off Rosberg on Friday, Hamilton said he’d been pursuing a different set-up direction which he gave up on before qualifying. He was quickest on the first runs in Q3 but Rosberg shaded him by 13 thousandths of a second on their final run. That left Hamilton on the slightly damp side of the grid for the start, though he said that didn’t cause his subsequent poor getaway. His recovery from eighth place was pretty much faultless – he seized every opportunity to gain a position, excerpt perhaps when he got Verstappen on the defence starting the final lap.

Nico Rosberg – Finally took the victory to go with the speed he has shown at Suzuka in the past. He delivered under pressure in Q3 and started cleanly, after which he had a straightforward run to the chequered flag.

Sebastian Vettel – His three-place grid penalty from Malaysia meant he started behind the Red Bulls instead of in front of them. However he jumped Ricciardo at the start and demoted Perez soon afterwards. A podium looked a strong possibility but his long middle stint – which Vettel said he was “keen to go for” – left him vulnerable to being undercut by Hamilton. That’s exactly what happened after Vettel lost a huge amount of time in traffic. An aggressive switch to softs for the final stint wasn’t enough to claim the place back and he had to nurse his tyres to the end.

Kimi Raikkonen – Complained of understeer on Friday but beat Vettel in qualifying by a few hundredths of a second. A gearbox change penalty wrecked his chances of a podium bid, however. He passed both the Force Indias, taking Perez with a little help from Palmer, but was jumped by Hamilton. He undercut Ricciardo at the beginning of the final stint which meant running a long final stint on hards.

Felipe Massa – Right on his team mate’s pace in practice, Massa was pipped by his team mate in qualifying and picked up a reprimand for driving too slowly. He was somewhat fortunate to finish the race in front of Bottas. With both Williams drivers making a single pit stop the team’s decision to bring Massa in two laps earlier, and the fact his pit stop was quite a bit quicker, decided this battle.

Valtteri Bottas – Said Friday was “straightforward” but neither he nor Massa were able to get the FW38 into the top ten shoot-out. After being dropped behind Massa through the pit stops he spent the final laps holding Grosjean at bay.

Daniel Ricciardo – Both Red Bull drivers had their qualifying simulations on Saturday interrupted by a Virtual Safety Car period. Ricciardo said a gradual loss of engine power impaired his qualifying effort, but he was promoted to fourth by the Ferrari drivers’ penalties. That was a mixed blessing as he started directly behind Hamilton, whose own slow getaway compromised Ricciardo. He made life more difficult by going off at Spoon at the beginning of his second stint. His final pit stop was both slow and too late to prevent Raikkonen demoting him to sixth.

Max Verstappen – Enjoyed “one of the strongest Fridays so far” and was consistently the quickest driver through Suzuka’s maximum-commitment first sector. Penalties promoted him to third, and Hamilton’s slow start handed him second, but he was quick enough to thwart the recovering Mercedes driver’s efforts to beat him to second place. He once again played it to the letter of the law when it came to defending his position.

Nico Hulkenberg – Didn’t have the measure of his team mate in qualifying and though he gained places at the start Raikkonen and Hamilton took them back easily. There wasn’t much to choose between the Force India drivers on race pace. Hulkenberg’s pass on Bottas was one of the highlights of the race.

Sergio Perez – Held third in the opening stages and the four cars which passed him by the end of the race were all much quicker. He might have stood a chance of keeping Raikkonen behind for longer had Palmer not got in the way. Despite a strong start to his final stint there simply wasn’t the pace in the car to jump the delayed Ricciardo.

Kevin Magnussen – Both Renaults were in the top ten in final practice but couldn’t find the same grip in qualifying. Magnussen fared worst, dropping out in Q1. He gambled on starting the race on hard tyres, pitted once, and finished the race with an even longer, 27-lap stint on mediums. It lifted him ahead of Ericsson, Alonso and Sainz but meant his race was an unexciting exercise in tyre preservation.

Jolyon Palmer – Had only done one lap of Suzuka before Friday so he could have done without missing much of first practice with an electrical problem. Nonetheless he made it into Q2 and reckoned he could have started as high as 12th had he not caught yellow flags on his last lap. Like Magnussen he was closer to Renault’s practice pace in the race, rising to finish 12th, despite a minor off while being lapped by Verstappen and Hamilton.

Daniil Kvyat – A gearbox problem at the end of first practice which cost him some time in the second session. He was also vexed by an ‘octopus’: strands of discarded tyre rubber which caught on an antenna. On a tough weekend for Toro Rosso he narrowly out-qualified Sainz and finished ahead too, albeit only 13th.

Carlos Sainz Jnr – Enjoyed a trouble-free Friday but the rest of his weekend was a frustration, particularly in the race. Toro Rosso’s lack of straight-line speed continues to dog them and Sainz was plainly over-driving the car at times in his battle with the Williams drivers. The result was an unhappy 17th place.

Marcus Ericsson – Disadvantaged by yellow flags in second practice which spoiled his qualifying simulation, but beat Nasr in qualifying. His own description of his race as “decent” seems fair: he was more consistent than his team mate and finished comfortably ahead.

Felipe Nasr – A substantial lock-up near the end of his first stint forced him into the pits earlier than planned and meant he finished off the back of the lower-midfield pack his team mate was in.

Fernando Alonso – Spun off at Spoon on Friday doing some damage to the car. He was McLaren’s only representative in Q2 and found the race highly frustrating: early on he spent several laps edging closer to Massa in the hope of making a pass, only to be thwarted by yellow flags at the chicane. Two-stopping meant he spent more time in traffic and despite quick stops on both visits he finished one place lower than he had started.

Jenson Button – Friday set off alarm bells about the car’s performance, though the team had suspected they would be particularly weak at Honda’s home circuit. The team hadn’t planned to fit Button’s new power unit this weekend, but he wanted them to do it on Friday evening. After he went out in Q1 the new unit was put in for the race, meaning he started last. He couldn’t make any progress with the hard tyres on his car initially, but two stints on softs got him up to 18th, setting the ninth-fastest lap on the way.

Pascal Wehrlein – Experienced Suzuka for the first time on Friday and said he felt happier with his car’s balance. However gearbox problems compromised his qualifying preparation and Ocon was quicker than him again. His race pace was generally good but he lost more time with blue flags and in the pits and finished almost 20 seconds behind his team mate.

Esteban Ocon – Also had his first experience of Suzuka but enjoyed a smoother weekend. Nonetheless the Manor didn’t appear to have the pace to challenge the other cars, consigning him to 21st.

Romain Grosjean – His braking problems continued on Friday, causing a minor off at Degner which damaged his front wing. However he was in great form in qualifying and had it not been for a DRS problem he might have started fifth. The Haas did not like the combination of worn soft tyres and a green track surface, but once he got the hard tyres on he was in great shape. Grosjean reckoned an earlier final stop could have earned him some points, and it looks like he was right.

Esteban Gutierrez – Stopped in the middle of the second practice session due to a turbocharger fault. In qualifying he accompanied Grosjean into Q3 but he spoiled his race with a spin while trying to pass Sainz. He finished with just the Manors behind him.