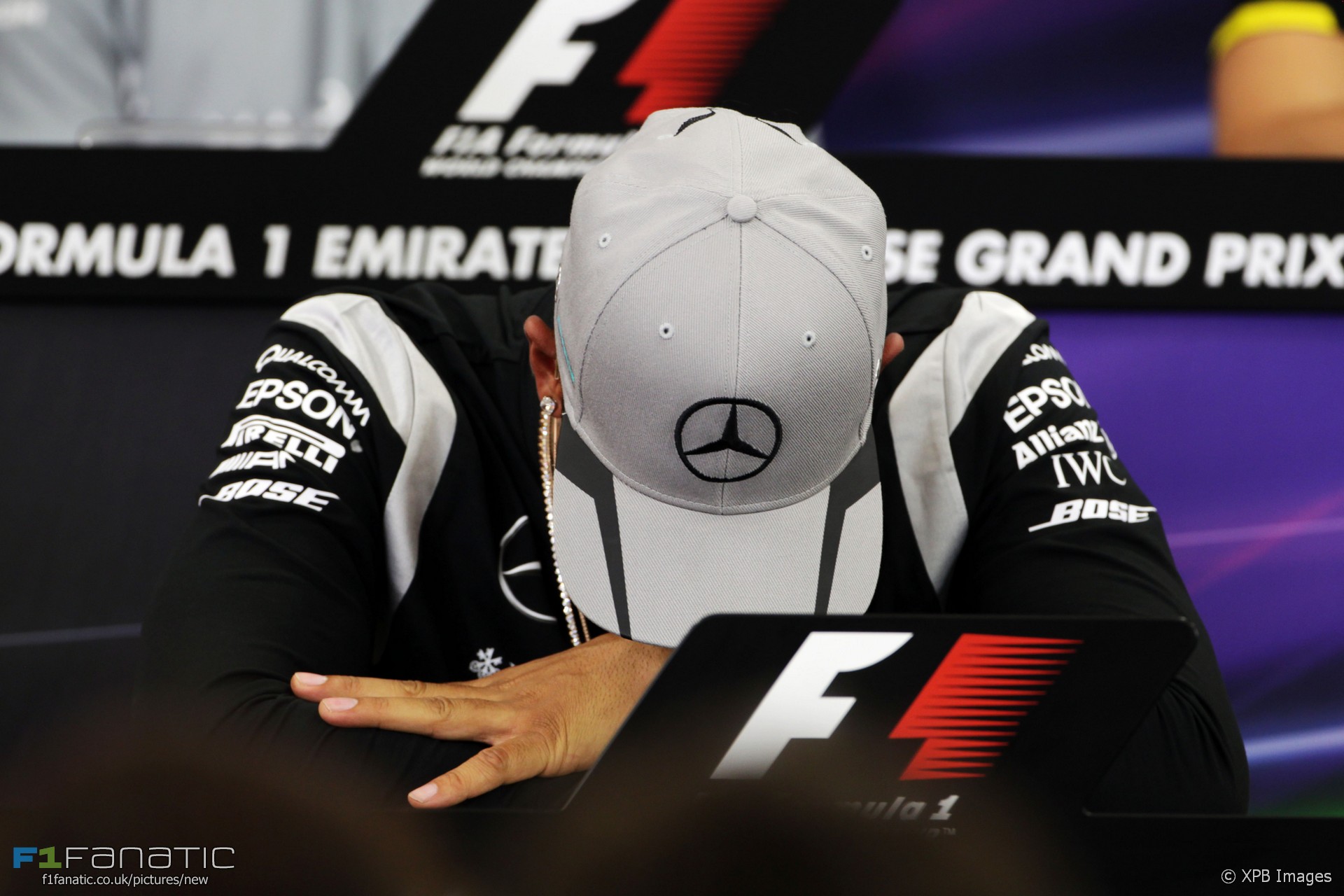 Lewis Hamilton is such a high-profile figure that anything he does invites questions about what true motive lies behind it.

In the case of his latest tiff with the F1 media there probably isn’t one. Is he trying to deflect attention away from his failure to beat Nico Rosberg in qualifying today or perhaps his poorly-phrased reference to ‘someone or something’ not wanting him to win the championship a few days earlier? No, he just seems to be fed up with press conferences.

Hamilton entertaining himself on Snapchat during the press conference. He showed his phone to Raikkonen but Raikkonen seemed unimpressed… pic.twitter.com/PWsIciKrXs

After all much the same story played out seven months ago. At a pre-season Mercedes press conference a bored Hamilton took to Snapchat to take pot-shots at the assembled media to complain about them asking him the ‘same questions for the last ten years’.

The theme was the same during the FIA’s press conference on Thursday. “We’ve been doing this a long, long time and it’s the same each time so got to keep adding new things to it,” Hamilton answered when asked about what he was doing with his phone. He answered his other questions very briefly.

Today Hamilton took things a step further. He greeted the journalists at Mercedes’ post-qualifying press conference by telling them “you’re not going to be smiling in a minute”. He would not answer their questions, he explained, and then walked out.

“If you felt I was disrespectful, it was honestly not the intention,” he said of his actions on Thursday. “It was just a little bit of fun. But what was more disrespectful was what was then written worldwide.”

So what was written which caused Hamilton such great offence? Reading the coverage from yesterday it’s hard to find anything the most thin-skinned person might term “disrespectful”.

Paul Weaver in The Guardian reckoned Hamilton had “made a mockery” of proceedings. The Telegraph’s Daniel Johnson called it an example of “Hamilton’s increasingly odd style”. Joe Downes in the Daily Mail referred to his “bizarre antics” and The Sun’s Jonny Fordham described him as “cleary [sic] uninterested in answering questions”.

This is not exactly character assassination. The articles are critical but even those who don’t agree with the slant can’t dispute the facts. Hamilton is not claiming someone has invaded his privacy, invented a quote or even – that old standard – taken his words out of context. His point of view has not been ignored: most of the coverage includes references to Hamilton’s explanation for his behaviour on Twitter.

So what exactly is Hamilton objecting to? The fact they disagreed with him? On Twitter he mocked others for ‘taking themselves too seriously’; the same applies to his inability to tolerate criticism.

To the hardcore element of Hamilton’s fan base, primed to heap abuse on anyone who gives him less then adulatory coverage, he doesn’t need to have a point. Siding with ‘the fans’ against ‘the media’ is an easier win than any of his battles on the track have been.

Perhaps he forgot the media is not required to be an extension of that fan base. “There are many of you here who are super-supportive of me and they hopefully know I know who they are,” Hamilton added to the assembled media. “Unfortunately the decision I will take unfortunately affects those who have been super-supportive, so that is why I am saying it with the utmost respect.”

Hamilton’s occasionally strained relationship with the media dates back to his first season in the sport when he refuted claims he had moved from Britain to Switzerland to reduce his tax bill. Now in his tenth year of Formula One he clearly doesn’t need to think very long about which aspect of his job he enjoys least.

The same is probably true for all the other drivers. Some of which have demonstrated very well that however boring a question is it doesn’t need to have a boring answer. But the other drivers don’t get asked better questions than Hamilton and few if any of them probably get paid more than he does.

Mercedes haven’t hired Hamilton just for his ability to drive a racing car faster than anyone. They’ve also hired Hamilton the brand. So while he may prefer to conduct his press obligations solely through fawning questions from his fans on social media, those who sign his cheques want him in the newspapers too.

No doubt someone will be reminding him of that fact in the near future. In the meantime Hamilton should heed the words of Charles Brownson: “Never quarrel with a man who buys ink by the barrel”.

161 comments on “Hamilton versus the media”