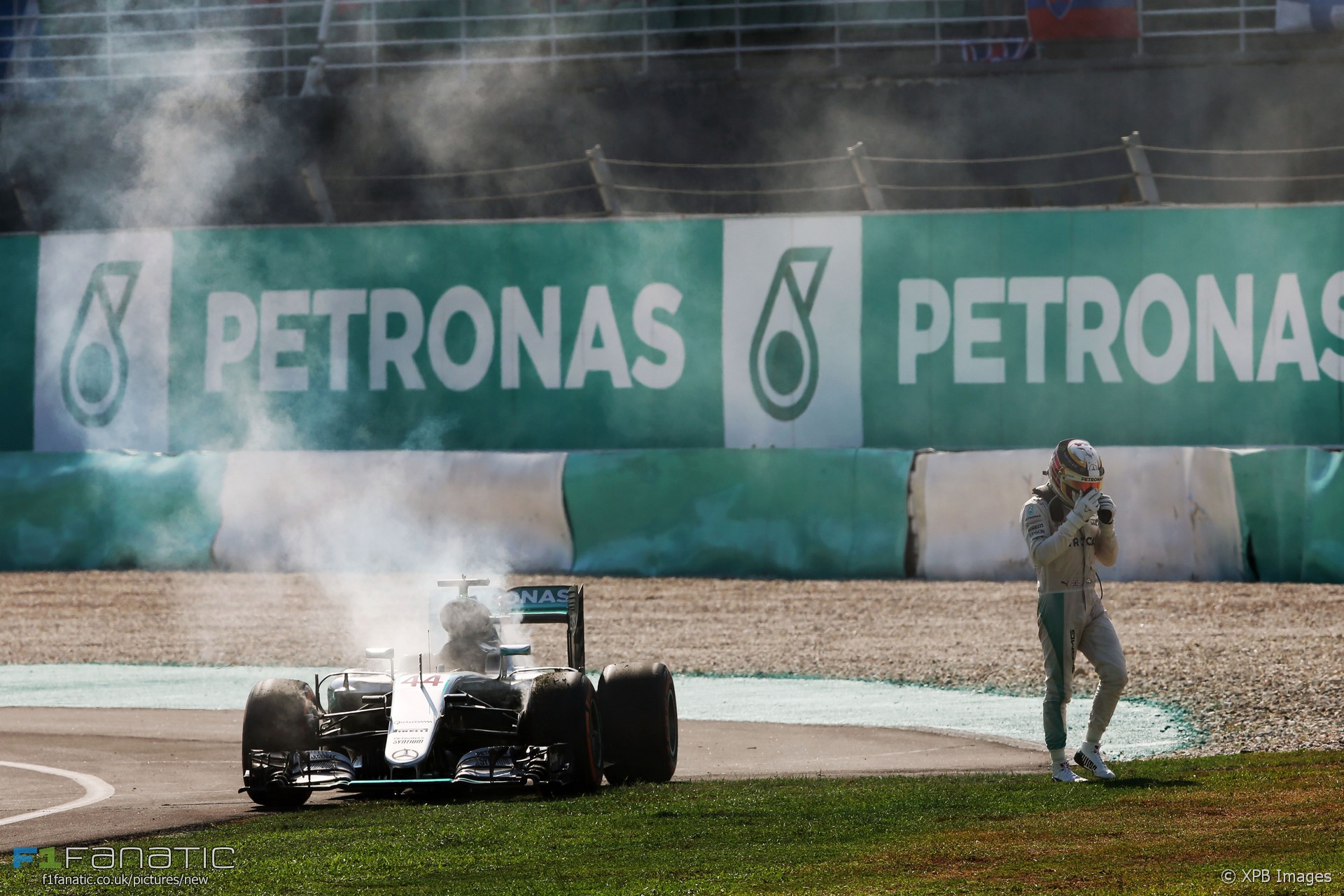 Mercedes executive director for technical Paddy Lowe has denied Lewis Hamilton’s engine failure in Malaysia occurred because he was pushing his car hard.

Red Bull’s Helmut Marko had suggested Hamilton’s failure happened because he was trying to pull out a gap over Daniel Ricciardo and Max Verstappen who were chasing him.

Lowe explained what Mercedes understood of the reasons for Hamilton’s blow-up during today’s FIA press conference.

“Lewis had a failure of one of his big end bearings at a very low mileage, a little over 600 kilometres,” said Lowe. “He had three new engines from Belgium where he took all the penalties, this is the second of those, first race Malaysia to be used properly. So very young failure for that bearing and not at all typical of the model.”

“We were operating it within completely normal bounds, no parameters out of their normal range. And no, he wasn’t pushing particularly hard, he was running in a normal race state at that part of the race. So totally unexpected for that reason.”

Mercedes have had difficulty tracing the exact cause of the fault because the engine was damaged when it failed, Lowe explained. “We’re trying to understand why the bearing failed” he said. “We don’t understand it precisely.”

“[It’s] very difficult on these occasions, we don’t often see it, the box of bits that you get back from a big engine blow-up, and very difficult to analyse that forensically and arrive at a root cause. But we’ve taken a number of precautionary changes across all eight power units that are on the grid to try and reduce the stress on that bearing.”

Lowe dismissed the allegations of sabotage by the team which arose after Hamilton said “something or someone doesn’t want me to win this year”, remarks he later said were referring to “a higher power”.

“I think anybody with an ounce of intelligence analysing this situation would realise that the prospect of us designing a system which would cause a big end bearing to fail at that precise point in the race… if we were that good we would control everything at every point.”

“We’ve had other failures in the year that were very unfortunate. If we were good enough to arrange such sabotage we wouldn’t have any failures. So I think it’s a very tough business Formula One. The engineering is operating right at the boundary of performance and therefore things to go wrong. The complexity is incredible.”

“Trying to engineer something to happen on purpose on a car, it’s similar to when people say to us ‘you favour one driver over another’ and the idea that we might give better equipment to one driver over another. If we’d invented something that makes our quicker of course we’d want it in both cars because we want to win the race. So we never hold back or would ever even contemplate, even if we could engineer it, which we couldn’t. So I think anyone intelligent can rule that out.”

However Lowe conceded Hamilton had been unlucky this year and even admitted he’d been pleased to see the driver overcome his early setback.

“We all know that you can throw three double-sixes in a row and yet when you see it done, just emotionally you feel ‘how did that happen?’ And we have got a little bit of that scenario with Lewis.”

“We have eight power units out there running around and with the exception of one failure they have all fallen to Lewis this year on his power unit and that is something that none of us can really understand, how things could turn out that way. But it is just the way the dice has been thrown.”

“Things do go wrong, we understand that, it just so happens that by pure coincidence, that has occurred repeatedly on Lewis’s car. So we’re gutted about it and we just wish luck wouldn’t fall that way. Understandable that Lewis, as we all were feeling immediately after that blow-up, how can that have happened again.”

“Personally I was only just getting over the idea of the consecutive failures he had in qualifying earlier in the year where already we felt the statistics had fallen very, very unfairly. I was very happy for Lewis that he’d managed to recover his points back up to a place of level competition with Nico [Rosberg].”