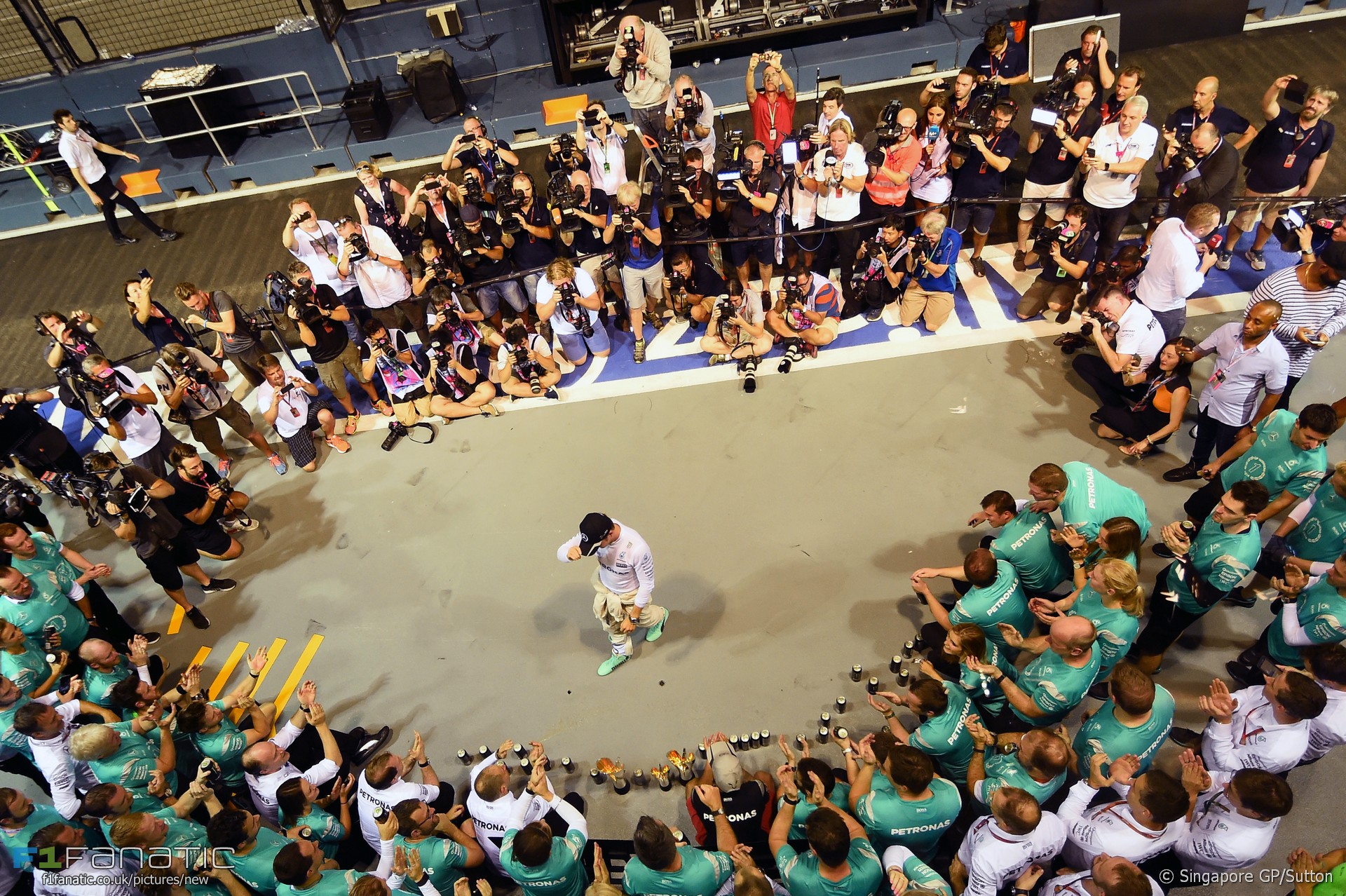 Mercedes can equal the record for the longest winning streak by an F1 team at the next round of the championship.

Nico Rosberg’s Singapore Grand Prix victory was the tenth in a row for the team, a streak which began at the Monaco Grand Prix. An eleventh win would tie the record set by McLaren between the Brazilian and Belgian Grands Prix in 1988.

However Mercedes have been here before. They also won ten consecutive races between the Japanese Grand Prix last year and the Russian Grand Prix earlier this season. Their hopes of an eleventh ended when their drivers took each other off at the start of the Spanish Grand Prix.

Had that not happened, and one of the silver car gone on to win that race, Mercedes would have obliterated the record. They would currently be on a 21-race winning streak and instead of tying the current record would be on course to double it.

Mercedes’ dominance has made a third consecutive constructors’ championship title a formality. They will clinch it at the next round in Malaysia if they finish the race at least 215 points ahead of their rivals, and they already have a lead of 222.

Rosberg has now won eight races this year to Lewis Hamilton’s six. As there are six races to go, and one of these drivers is virtually guaranteed to become champion, the record for most wins in a season without winning the championship is likely to fall to one of these two drivers.

There have been four occasions when a driver has won seven races without taking the title: Alain Prost in 1984 and 1988, Kimi Raikkonen in 2005 and Michael Schumacher in 2006.

Speaking of Schumacher, Rosberg emulated him by winning his 200th Formula One start from pole position: Schumacher’s came in the 2004 European Grand Prix at the Nurburgring. This was Rosberg’s 22nd career victory, giving him as many wins as Damon Hill, and his 29th pole position, drawing him level with Juan Manuel Fangio.

However Daniel Ricciardo took the race’s fastest lap. The Red Bull driver took the seventh of his career, the same number achieved by Jacques Laffite, and also the 50th for Red Bull.

Ricciardo has never failed to finish on the podium at Singapore since joining Red Bull. He prevented Mercedes from taking a one-two, a feat which no team has yet managed to achieve at this circuit.

As the chequered flag fell Rosberg had just 0.488 seconds in hand over Ricciardo. That’s the closest winning margin we’ve seen at any track since the 2010 Singapore Grand Prix, when Fernando Alonso led Sebastian Vettel home by 0.293s.

Along with Rosberg, Toro Rosso marked their 200th grand prix start last weekend, both having arrived in F1 at the beginning of 2006. The 950th round of the world championship also saw the 100th appearance by Romain Grosjean, although he failed to start the race.

Have you spotted any other interesting stats and facts from the Singapore Grand Prix? Share them in the comments.