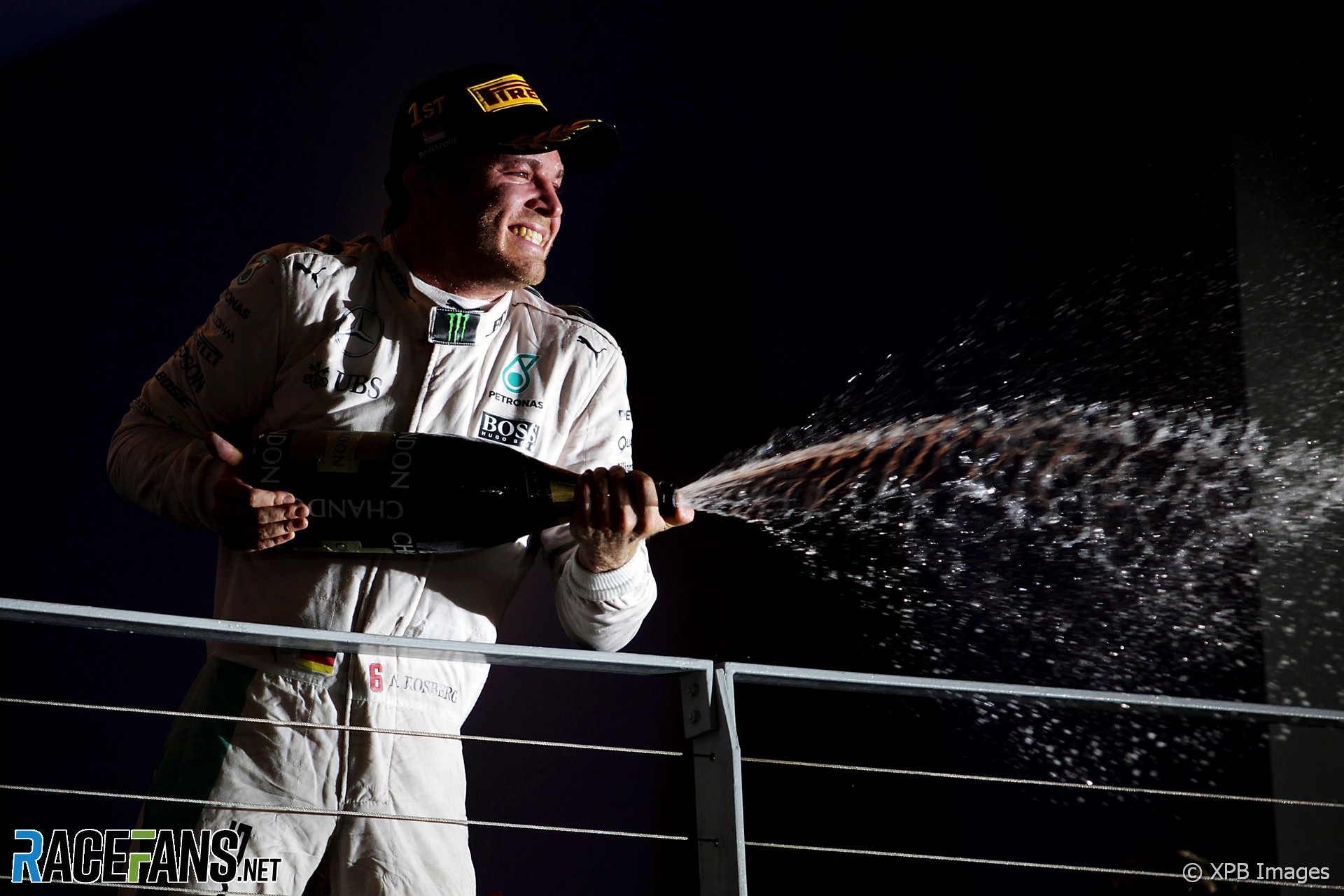 Nico Rosberg’s third consecutive victory has fired him back into the lead of the drivers’ championship – and piled pressure on his team mate at title rival.

Lewis Hamilton was forced to settle for third place. And that was one position higher than he might have finished had it not been for a questionable strategic call by Ferrari.

With Hamilton off his game, that left Daniel Ricciardo to take the fight to Rosberg. And the Red Bull driver came within half a second of taking the victory.

For once both Mercedes got away from the line well, though in Hamilton’s case it wasn’t well enough to take second place away from Ricciardo. At any rate they wouldn’t be racing for long, as the Safety Car was summoned moments later due to unfolding chaos behind them.

Max Verstappen in the second Red Bull had made another of the sluggish getaways which have spoiled his races since the summer break. “It wasn’t as bad as Monza,” he explained, “but it wasn’t good.”

“I had a lot of wheel spin and then with [Nico] Hulkenberg spinning in front of me, I had to brake even more which compromised my whole start.”

Hulkenberg was gyrating because he had got away very well, only to find himself competing for the same patch of road with Verstappen and Carlos Sainz Jnr.

“I had made such a good start – probably my best getaway off the line this year,” said Hulkenberg. “I went for the gap between the two Toro Rossos, which was there, but obviously things got very tight.”

“I had Daniil [Kvyat] on my right and Carlos on my left, and Carlos hit my left rear, which sent me into the wall.” His race was over before he’d even reached the first corner.

The race was restarted at the end of lap two after little delay but the speedy resumption of racing almost had serious consequences. One marshal near turn one had not yet returned to his post, and had to sprint for cover as the cars hammered towards him approaching top speed. He was still running alongside the track as Rosberg and the rest came by.

Ricciardo, who’d started on super-soft tyres, edged towards Rosberg’s ultra-soft-shod Mercedes in the first laps at racing speeds. But from lap seven the Mercedes began to increase their pace and Rosberg edged away.

However all was not well for the 2016 pace-setters. Both drivers were receiving warnings about their brake temperatures – and Rosberg’s were particularly urgent. Nonetheless he continued to edge further ahead of Ricciardo.

Crucially, he was also able to eke a sufficiently long stint out of his ultra-soft tyres. By lap 15 Red Bull decided it was time to get on with their programme and brought Ricciardo in, a lap before Rosberg arrived in the pits for his first stop.

Hamilton came in on the same lap as Ricciardo which, in his view, wasted an opportunity to get closer to the Red Bull. He also wasn’t pleased with the choice of soft tyres for his second stint, believing it was too conservative. Rosberg was on the same rubber while Ricciardo took another set of fresh super-softs.

This allowed the Red Bull to make some inroads into Rosberg’s lead, bring it down to 3.8 seconds before his tyres began to wilt. Mercedes weren’t having things all their own way.

That was particularly true for Hamilton, who was still struggling with his brakes. On lap 33 he ran wide onto the kerb at the exit of turn seven – a place he’d been struggling at all weekend – and Raikkonen pounced. The Ferrari driver was up into third, but this change of positions set up a thrilling conclusion to the race.

Hamilton’s second set of soft tyres put him on course to finish the race. But early in the stint Mercedes advised him they were switching to ‘plan B’ and he swiftly increased his pace: he would be stopping again.

“Once my signal of brake overheating reduced, I was able to start to pick up the pace,” he explained. “I was still getting the warnings towards the end but like the last ten laps, I just kind of just let it continue flashing as a warning and hoped for the best.”

He returned to the pits with 16 laps to go to take on a set of super-soft tyres. All eyes were now on Ferrari to see whether they would react. Hamilton had been 2.1 seconds behind their man on the lap before his stop, but the performance gain from a set of fresh tyres at Singapore was huge, putting Raikkonen at great risk from the ‘undercut’.

Nonetheless Ferrari chose to bring him in. He was sent away with a set of ultra-softs bolted on but he wasn’t able to make use of them before Hamilton whistled past. Raikkonen was characteristically blunt in his response to his engineer’s reminders about obtaining the maximum performance from his car. “What do you want me to do in the pit lane? Go faster?”

While Raikkonen did not have enough time in hand to pit and come out in front of Hamilton, Ricciardo did: and Red Bull took full advantage. Mercedes, however, were more alert to Ferrari of the threat of being ‘undercut’ if they brought Rosberg in. “Box,” they told the race leader after Ricciardo came in, “but stand by for abort”.

The high buildings around Singapore present teams with the added complication of poor GPS data. That is crucially important when making these last-tenth-of-a-second decisions – something Mercedes have bitter experience of from Monaco last year, when they inadvertently threw away a certain victory for Hamilton. Since then the team has produced new software to work more reliably in these circumstances, and in Singapore it served them brilliantly.

Monitoring Ricciardo’s progress and Rosberg’s delays in traffic closely, the team urgently told Rosberg “staying out” the instant it became clear he could no longer preserve his lead over Ricciardo. But he would have to hang on until the end on his older, harder tyres.

Ricciardo set the fastest lap of the race on the 49th tour. It was his first full lap back on the super-softs, and at 1’47.187 it was a stunning 3.7 seconds quicker than Rosberg managed on the same lap. It tore the first chunk from his 25-second lead which Ricciardo decimated over the remaining laps.

Rosberg kept some pace in reserve – he backed off to the low 1’51s for a few laps – but the advice from Ricciardo’s engineer that a 1’50.3 represented Rosberg’s true pace was bang on the money.

A critical moment came on lap 57. Rosberg got his pace back down to that level just as Ricciardo was losing time in traffic. But concern grew on the Mercedes pit wall as it became clear Rosberg was going to come awfully close to catching a three-car train of lapped cars on the final tour.

It was close – but not close enough for Ricciardo. He began the final lap two seconds behind Rosberg. Kevin Magnussen, the first of the driver they were catching, did his personal best first sector on the leader’s final lap. Had he caught blue flags a few corners sooner, Ricciardo might just have done it. As it was he crossed the line less than half a second behind Rosberg.

Nonetheless Ricciardo was pleased his team had taken the gamble. “I think we did the right thing in the end,” he said. “Obviously it still didn’t give us victory but I think staying on the same tyre probably wouldn’t have
given us any better chance.”

The lack of Safety Car appearances after the second lap of the race was a surprise to many. The early appearance at least helped Sebastian Vettel minimise the time he lost by starting last, and a plentiful supply of fresh tyres made his progress back into the top five fairly straightforward, though he had to get his elbows out along the way.

Fernando Alonso held fifth place at the end of the first lap and briefly entertained hopes of picking up a few more places if a Safety Car period fell in his favour. But none came, and he inevitably dropped back behind the faster cars of Vettel and Verstappen.

However seventh place was an excellent result for McLaren at a track where Toro Rosso looked quicker. Sainz was unlucky to receive the black-and-orange flag due to loose bodywork on his car following the collision with Hulkenberg, which wrecked his chances of scoring points. Team mate Daniil Kvyat lost time behind Alonso and scrapping with Verstappen on his way to ninth.

Kvyat was also out-done by Sergio Perez, who worked his usually deft way with the tyres on his way to eighth. Force India got him off his used ultra-softs during the Safety Car period, and a 36-lap run on the soft tyres got him back into the points following his double penalty yesterday.

Kevin Magnussen also deserved considerable credit for earning Renault’s second points finish of the year with tenth place. A disappointed Esteban Gutierrez notched up his fifth point-less 11th-place finish for Haas, though that was at least better than his miserable non-starting team mate managed.

As Rosberg explained, his win was especially sweet for Mercedes 12 months on from their disastrous 2015 showing at Singapore.

“We got destroyed by Red Bull and Ferrari,” he reflected, “and we understood what we did wrong and came back this year and beat them on their strongest track. That’s really awesome to see that.”

Rosberg marked his 200th career start with his eighth win of the year, one which fires new energy into his championship bid. He went into the summer break having lost the lead to Hamilton, but has come back hard at his team mate as the championship moves into its final phase.

Hamilton has fallen behind his team mate in the championship, but he’s recovered larger deficits in less time already this season.

“We’ve come from 43 points down so theoretically eight points isn’t anywhere near as steep as that,” he said.

“But still, Nico’s been performing fantastically well. This weekend he’s done an amazing job. I expect him to continue like that so I’ve got make sure that I do the same.”