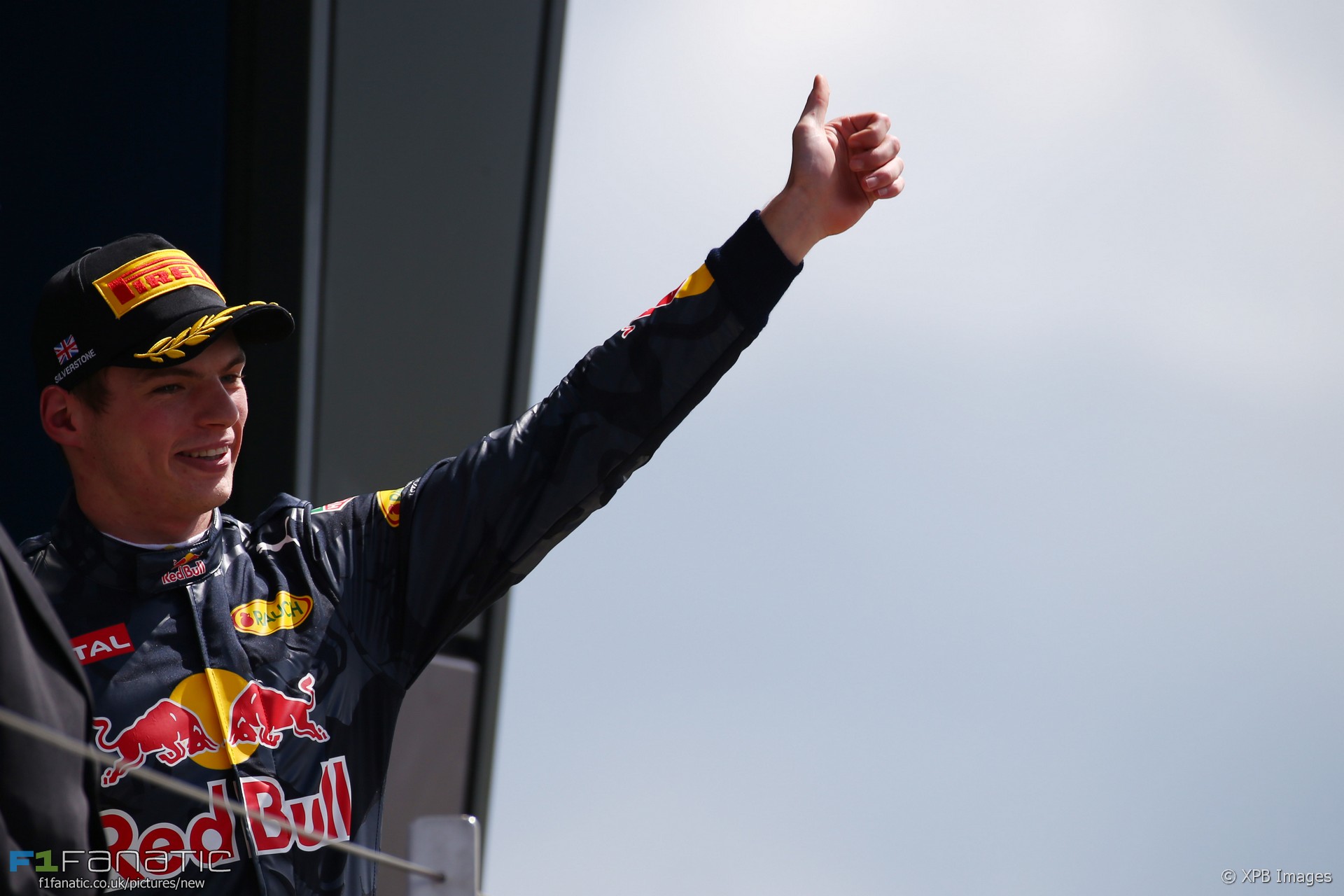 Max Verstappen was voted Driver of the Weekend for the second time this year after claiming second place in the British Grand Prix.

Verstappen has now been voted Driver of the Weekend five times in his first 29 races since arriving in F1 last year.

Daniel Ricciardo had out-qualified his team mate at every grand prix this year before arriving at Silverstone. Verstappen put an end to that with a brilliant first run in Q3, fully committed through Silverstone high-speed sweeps.

On the wet track at the start of the race he immediately hounded Rosberg, venturing out onto the slippery parts of the track in pursuit of a way around the Mercedes. He eventually found one when Rosberg ran deep at Becketts, and completed a remarkable pass on the outside of the Mercedes.

As the track dried up the more powerful W07 always looked likely to glide back past the Red Bull in a DRS zone, and so it did. But Verstappen stayed close enough to take advantage of Rosberg’s gearbox problem and subsequent penalty for receiving radio assistance, taking a deserved second place.

Verstappen, no doubt. He kept up with the Mercedes cars even in the dry, and they have an advantage of one second a lap.

I’ve said it before and I will repeat it. Verstappen is all ready the best driver in F1. Now that he’s getting a grip on qualifying he really doesn’t have any weaknesses. He’s incredibly fast, he’s a great wet-weather driver, he’s great at tyre management. He’s a great overtaker and great at defending.

There have been other drivers with similar skill sets in the past. But not from the start of their career, they got there with experience. This kid is a born racer and the best I’ve seen coming through the ranks ever. And I have followed F1 since the seventies.
Kimiwillbeback

After the overtake on the outside of Becketts it has got to be Verstappen.

Hamilton was nearly perfect, but his win was more about pace and teammate under-performing.

Verstappen had an excellent dice with one Mercedes and raced to a second-place result in the end. Not bad for a teenager. He was looking especially racy.
@Jureo

That overtake was sublime, his race was well managed.

But I’m most impressed how he has grown over the past weeks. First we all said that the team was helping him, then in Austria he showed he could stay ahead of Ricciardo in a race and we were critical of his qualifying.
@Coldfly

His first time out qualifying Ricciardo since his switch to Red Bull was followed up by a great performance in the race to get another podium. An impressive move to get past Rosberg in the wet but he just didn’t have the pace in the dry to stay ahead until the end, but he managed to stay close enough to benefit from Rosberg’s post race penalty.

My second choice would be Hamilton, he was quickest throughout practice and took a commanding pole, in the race he pulled a gap once the safety car came in and was then never troubled, managing his pace to look after his car.
@PJA

A storming drive to victory earned Lewis Hamilton most of the remaining votes.

Fastest every session and fastest lap? He could do no more. Yes had fastest car but could do no better. Verstappen was very good as well but how could Hamilton have done any more?
Markp

I thought Ham’s practice pace was pretty exemplary and his qualifying was utterly sublime. I agree that there was only one person that he was really competing again here, but he duffed Rosberg up pretty well.

In the race, it’s difficult to see beyond Verstappen for sheer determination and large, spherical objects. But this is Driver of the Weekend and so I think it has to go to Hamilton.
@Nickwyatt

The Force India pair were among few other drivers who picked up votes for their British Grand Prix performances.

Really find it hard to give anyone. Everyone was pretty disappointing. A lot of luck for the leaders with the Virtual Safety Car, means they rule each other out. Especially as Hamilton and Verstappen made mistakes. Rosberg was poor in the wet but looked like a man possessed when he finally got passed Verstappen.

Gave it Nico Hulkenburg as he closed that massive gap to Perez up as Perez got a lot of luck with the Virtual Safety Car.
Yes (@Come-on-kubica)

I voted for Perez. Thought he did a pretty decent job considering where he started and didn’t see the point in voting for anyone above him as they all finished in the same places without major incident. Perez though ran well for a Force India and beat Hulkenberg again even though starting behind him.
Adam (@Rocketpanda)

11 comments on “Second Driver of the Weekend win for Verstappen”