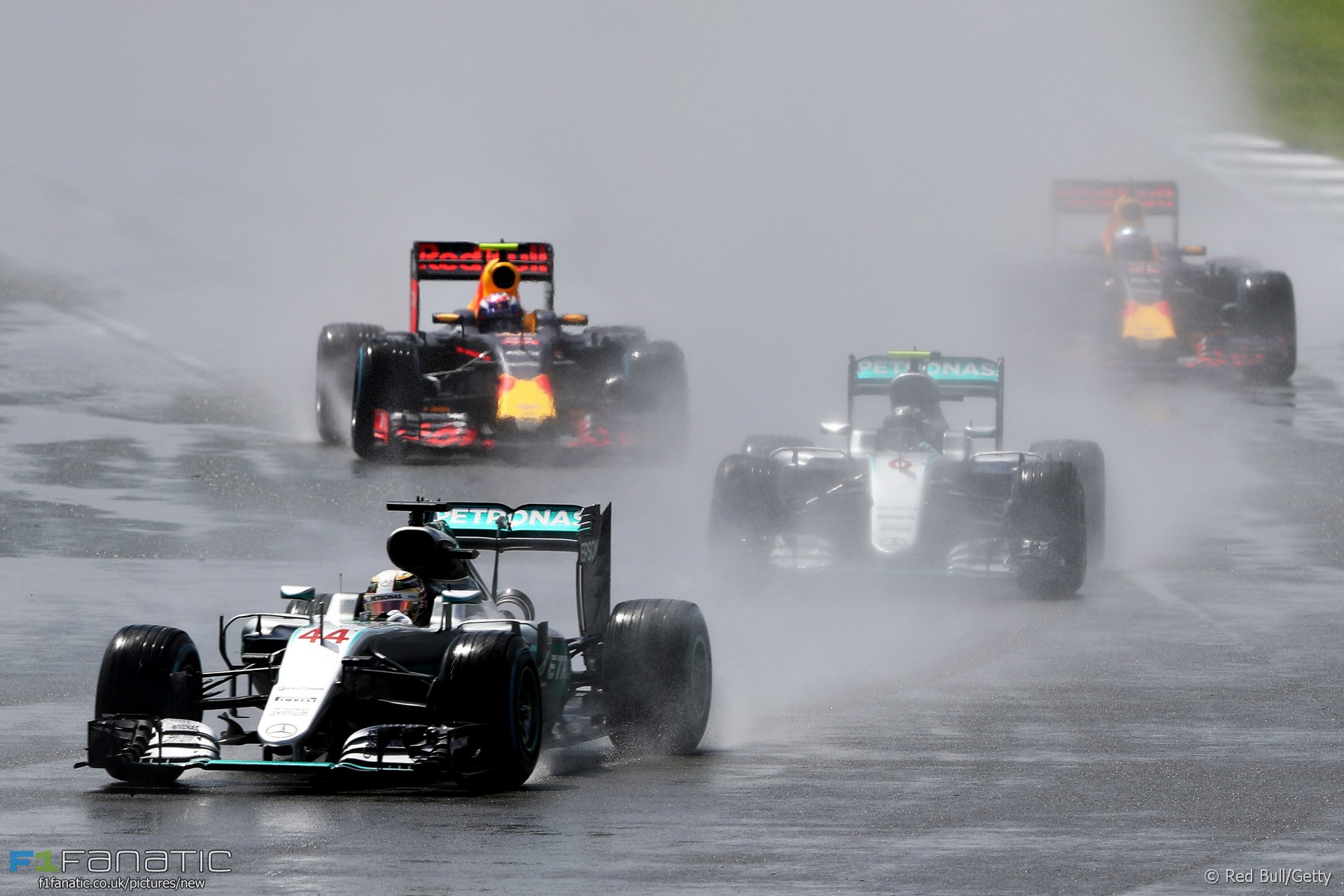 A downpour 20 minutes before the start at Silverstone raised prospects of an action-packed race.

But for many the British Grand Prix didn’t live up to the promise. F1 Fanatic readers gave it a surprisingly low rating of 6.4 out of ten – the third-lowest so far this year.

Was that too low for a race which featured Max Verstappen’s remarkable pass on Nico Rosberg and some of the trickiest driving conditions so far this year? Or have inevitable long Safety Car periods taken the unpredictability out of wet races?

Here’s what you had to say about the British Grand Prix.

Promised a lot, delivered little. What is the point of wet weather tyres if they aren’t going to race on them? Safety Car start, perhaps, but they needed two laps behind it not five. As usual everyone dives into the pits to jump onto the inters.

The Virtual Safety Car early on decided the race. Hamilton benefited massively from that.

The highlight was Verstappen passing Rosberg where nobody is supposed to overtake. But DRS ruined the Rosberg versus Verstappen battle.
@Roodda

So disappointed. A great track in treacherous conditions, only to have little action with easy DRS fly-by overtakes and no battles for the top points.

This is the first wet race I’ve watched and that I remember that was rubbish.
Owen Smart (@Smartez)

Safety Car start, then straight to intermediates? This is not Monaco, there is run-off, acres of run-off. That pretty much took away any fight for race lead to easy Hamilton win.

Imagine a race if Verstappen took Hamilton on start, and we would have a mighty scrap for the lead.

That being said, racing was good, start was poor, end of race was undramatic, but it was always gonna be like that with Hamilton in clean air.
@Jureo

I used to love rainy races but after this season I dread them because of the Safety Car.
Josh

The disappointment of not having a standing start seemed to spoil the afternoon’s contest for many, but others were bemused by criticism of the race:

I don’t get the negativity. Okay, for wet weather it wasn’t the best, but still a good show.

The Rosberg-Verstappen fight was great. Lots off people spinning, going wide and struggling with the circumstances. And some very good fights in the midfield.
Jim Manna

Verstappen made the race for me after race control once again ruined a nice possibility for an exciting wet race.

I understand that they start behind the Safety Car in wet conditions. But just release these guys after one or two laps. Otherwise we can just keep those full wet tyres in Italy.
Ronald (@Mosquito)

And on a weekend where Mercedes beat their rivals by a full second in qualifying, others felt the blame for the lack of competition belongs elsewhere:

The non-Mercedes teams and engine suppliers should be ashamed of themselves. After almost two and a half years of this hybrid engine formula, they’ve made next to no impact on the dominance of the brilliant Mercedes team (and their superb driver in car 44).

Even teams with the same engine are nowhere (and in the case of Williams, seemingly getting worse as time goes on). The only times that they tend to luck into a win is when the Mercedes drivers have a collective brain fade or when the silver cars hit reliability problems.

These non-silver teams employ hundreds and hundreds of talented people and have hundreds of millions of Euros/dollars to throw about, yet Mercedes still can easily be a second a lap faster. So we get all-time greats like Vettel and Alonso fighting for scraps, whilst Hamilton could probably win even if he started one lap behind everyone else or if he drove in reverse.
@Jules-Winfield

However it seems those who attended in person didn’t feel short-changed:

The television coverage and spectacle is secondary to appreciating the other aspects of watching live motorsport.

The driver skill around Club corner was spectacular to watch today with slippy conditions for two-thirds of the race.
@ju88sy

41 comments on “Wet race at Silverstone leaves many cold”