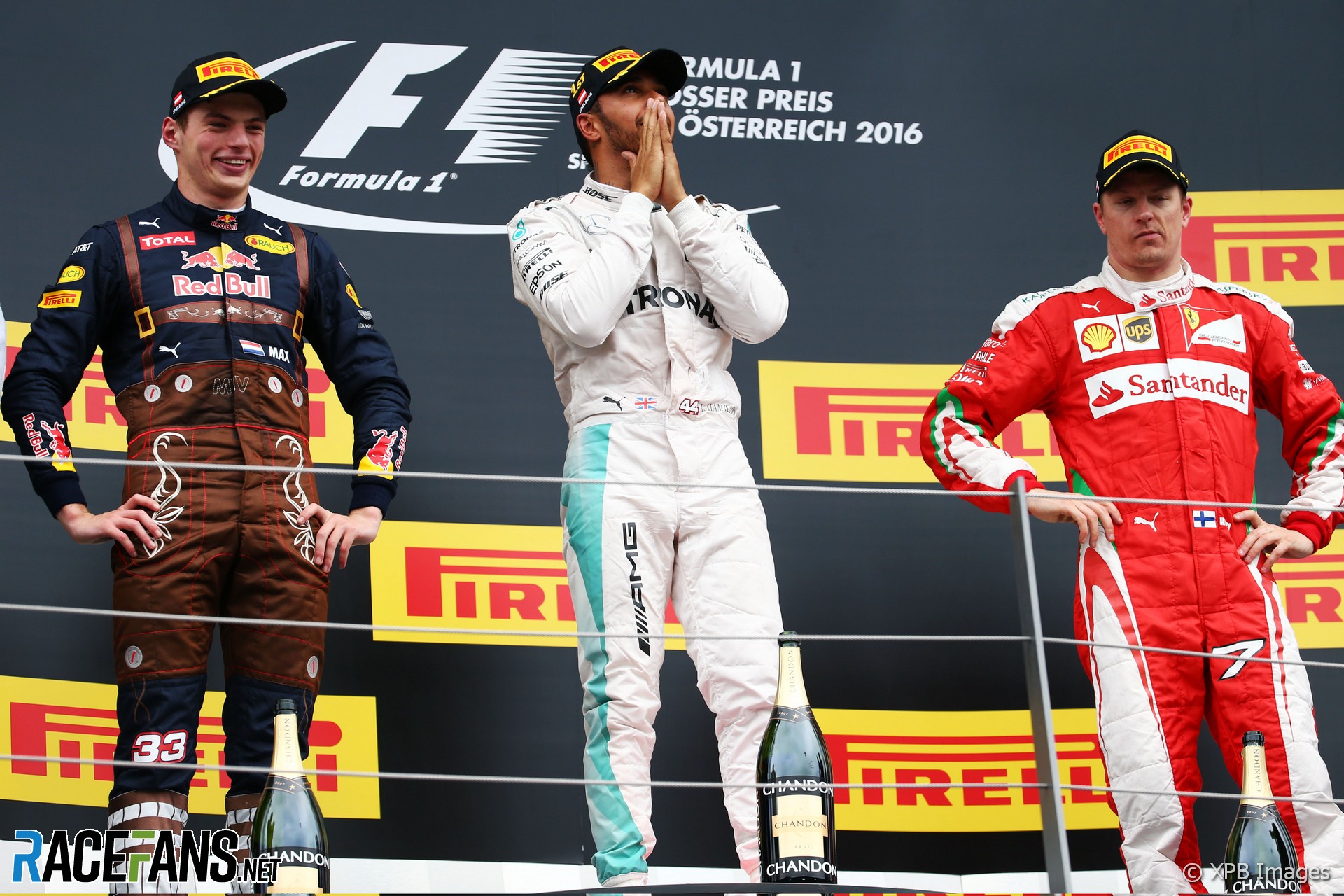 At the end of last year Mercedes were repeatedly criticised for not letting their drivers race each other via strategy. As a result they changed their approach for 2016, allowing their drivers to run different strategies.

But in the Austrian Grand Prix it created the circumstances under which Lewis Hamilton and Nico Rosberg came to blows on the final lap, costing the team valuable points.

Mercedes had wrecked their ultra-soft tyres in the hot conditions of final practice. On a track which reached 52C they lasted just a handful of laps. But the far cooler conditions of race day was expected to change that – and so it proved.

The track temperature was just 26C when the race began, and after converting his pole position into the lead Hamilton was able to eke out his ultra-soft tyres until lap 21. Rosberg, having to fight his way up from sixth on the grid, made his first stop much earlier.

Rosberg had just done two consecutive laps which were almost a second slower than Hamilton’s, indicating he hadn’t been able to look after his tyres as well as his team mate. By pitting first he had the advantage of the ‘undercut, but as he was over six seconds behind his team mate to begin with it didn’t immediately matter.

By lap 20, however, Rosberg was in clear air and about to move into Hamilton’s pit window. A pit stop at the Red Bull Ring costs around 20 seconds, and Mercedes called Hamilton in when his lead was 21.9 seconds. But Hamilton’s pit stop was slow – a sticking left-rear wheel cost him over a second – and Rosberg suddenly lowered his pace. That proved enough for the number six Mercedes to jump ahead.

With older tyres Rosberg was obviously at a greater risk of needing to make a second pit stop. That risk diminished when the Safety Car came out due to Sebastian Vettel’s tyre failure, which came with zero warning and was alarmingly reminiscent of the ones he and Rosberg suffered at Spa last year.

By lap 53 of 71 it seems Hamilton’s engineers were satisfied Rosberg did not need to pit again. So what was their best chance to help Hamilton get ahead of Rosberg?

By leaving him out he would likely follow Rosberg to the flag, both on similar-age tyres of the same compound. By bringing him in they could try to re-catch and attack Rosberg on fresher tyres or – if Rosberg also pitted – jump him using the undercut.

Rosberg and Hamilton’s lap times on soft tyres suggest they could have run to the end without pitting a second time. If a joint decision had been taken to pit both cars, it begs the question why Hamilton was given the advantage of pitting first and getting the undercut, even if it failed to get him ahead.

Rosberg did the latter, possibly because Hamilton’s pit stop again did not go smoothly. Again he lost over a second compared to Rosberg on the jacks (Rosberg had the fastest complete pit stop of the race) and compounded it by running wide at turn two on his out-lap while trying to keep Daniel Ricciardo behind.

Both drivers avoided the ultra-soft tyres. Hamilton had nursed his for 21 laps in the 1’11s, but Mercedes clearly doubted they could manage a similar distance going three seconds per lap faster – or more. And, of course, when Hamilton’s team brought him in they had no idea whether Rosberg would respond. Had that happened, while Hamilton might be able to catch Rosberg on ultra-softs, they would be very worn by the time he got within range – potentially useless.

Would the super-softs hold up as well? If they would, better to have a new set. Rosberg did, but Hamilton only had a used set. After leaving the pits he quizzed his team why they had put him on the harder tyres.

“I was not in a position to make a judgement there. When I came in I’m hoping the team will give me the best tyre.”

With hindsight it’s clear they did. Although Hamilton’s tyres took a little longer to warm up – a problem mitigated by the fact both drivers ran into traffic – when they came good Hamilton was consistently quicker than Rosberg.

What happened next was the exact reason why Mercedes held back from allowing their drivers to attack each other via strategy last year. Hamilton drew within range of Rosberg, attacked him on the final lap on the outside of turn two only for Rosberg to stray well wide of the racing line, causing contact between the pair.

Even taking into account the brake-by-wire problem which had apparently developed on Rosberg’s car, his obvious reluctance to turn into the corner was damning. However poetic justice reigned: as Hamilton rejoined the track Rosberg was already in trouble, his front wing folding under his car.

Hamilton shot past Rosberg, just as yellow flags were appearing for Sergio Perez’s crashed Force India, but with his team mate’s car slowing rapidly this was not a punishable offence. Rosberg’s defending was, but after lengthy deliberations the stewards handed down little of substance: a ten-second penalty left him in fourth place, which he had slipped to at the finishing line anyway.

Wehrlein in the points

Rosberg was demoted by Max Verstappen, who once again proved impervious to pressure from Kimi Raikkonen. Daniel Ricciardo fell behind is team mate at the start and came home fifth.

Jenson Button was a delighted sixth having defied expectatoins by moving up to second place and holding position for several laps at the start. His team mate suffered engine problems for much of the race and retired.

Like Verstappen and Raikkonen, Romain Grosjean made a one-stop strategy work and collected more points for Haas with seventh ahead of Carlos Sainz Jnr. Valtteri Bottas, who grained his tyres early on, had to make a further pit stop and fell to ninth.

Perez’s late retirement due to brake failure allowed Pascal Wehrlein to claim an extraordinary first point. It was all the more remarkable given he’d pulled up into the wrong starting position pre-race and had to reverse back into position.

A frustratingly point-less season continued for Esteban Gutierrez as he registered his third 11th-place finish. Felipe Nasr ran in the points during the Safety Car period but couldn’t eke his tyres out for a one-stop, meaning Sauber’s wait for points goes one.

From his front row start, Nico Hulkenberg plummeted down the order with graining tyres. He eventually retired due to high brake wear, a sensible move given his team mate’s crash due to the same problem.

Will Mercedes end the right to race?

Mercedes paid a high price for letting their drivers attack each other via their race strategies. Under their 2015 policy the dramatic outcome would probably not have happened.

Mercedes let their drivers race, which is exactly what many fans want them to do. But it brings risks along with it.

Toto Wolff is already threatening to impose team orders to prevent a repeat of incidents such as this and their first-lap collision in Spain. While they may not go that far just yet, it would be no surprise if they revert back to their 2015 policy of using the most conservative strategy to guarantee the best possible result for the team.