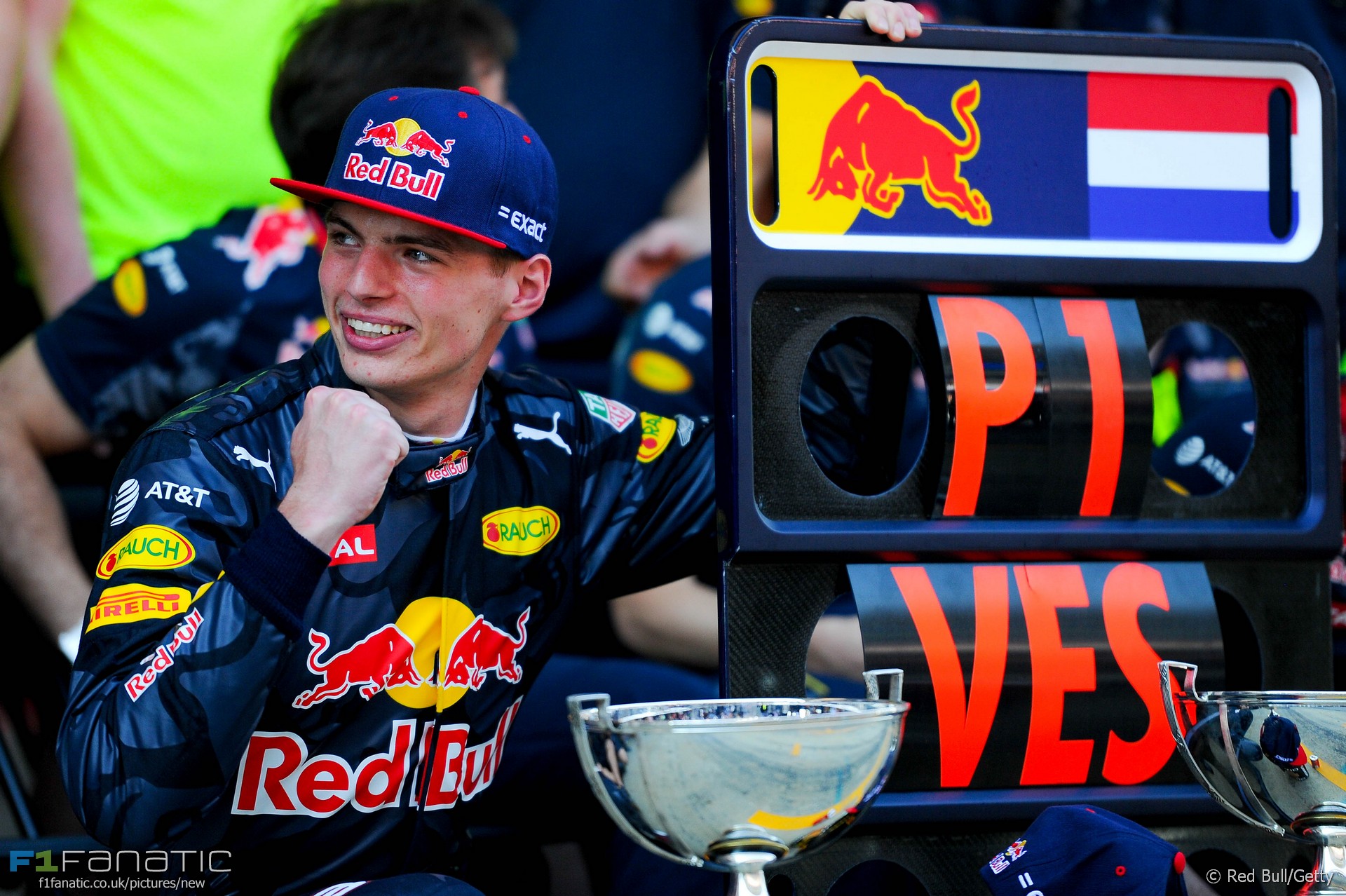 Max Verstappen may have taken his first race win on Sunday but it was the fourth time F1 Fanatic readers have voted him in Driver of the Weekend.

However the breakthrough race victory for Red Bull’s newest driver made him overwhelmingly your favourite choice for the Spanish Grand Prix Driver of the Weekend.

Verstappen took over three-quarters of the votes cast – highest since Lewis Hamilton won with 76.6% at the 2011 German Grand Prix.

Verstappen’s weekend was impressive from the off. Just eight days after being announced as a Red Bull driver he jumped into a car he’d never driven before and took it to sixth-quickest in opening practice, less than two-tenths of a second behind team mate Daniel Ricciardo. There was a similar margin in second practice, though both Red Bulls found themselves slightly lower on the time sheets.

Come Saturday morning Verstappen reversed the deficit with a time now one tenth in his favour for fourth fastest, and Q1 and Q2 – where he was quicker than Ricciardo by an ever increasing margin – raised questions as to whether there may well be a shock on the cards. It wasn’t to be – Ricciardo turned the tables on his young team mate with a single flying effort in Q3 – but Verstappen lined up right behind him on the second row.

Verstappen didn’t make the best getaway from the dirty side of the grid and Sebastian Vettel beat him to turn one. But he calmly picked off Vettel on the outside of turned three and moved up into second as the Mercedes cars ploughed into the gravel.

Despite his limited time in the car an impressive opening stint from Verstappen kept him in touch with Ricciardo. He lost time pitting later for his first stop, but showed speed to quickly close the gap back up.

As Ricciardo and Vettel switched to three-stop strategies, Verstappen found himself in the lead. From then on, he controlled the race with a calm maturity far beyond his mere eighteen years. Kimi Raikkonen loomed large in his mirrors late on but Verstappen never looked like faltering – he calmly stuck to the racing line without as much as a locked brake giving a hint at the pressure he was under. His first victory will surely not be the last.

Yes Ricciardo out-qualified him but at no point in the race did Ricciardo look like the faster driver. Verstappen’s first stint was as impressive as his last. His first race and immediately on Ricciardo’s heels, closing the gap down to under a second against a driver who was voted best of class in 2014. And the last stint, lap after lap of continued pressure from Raikkonen. He didn’t make a single mistake.

Even if Ricciardo had been kept on the same strategy and won, a second or third for Verstappen still would have led to me calling him Driver of the Weekend. He kept pace with Ricciardo all weekend in a car he is not nearly as familiar with, and then he went on to have a mistake-free race. Of course, the fact that he did win just seals the deal.

It was a Red Bull one-two in the voting with Ricciardo earning much praise, though he only picked up 7.9% of the votes. Verstappen’s former team mate Carlos Sainz Jnr also earned plaudits:

Arguably still, I think, considering the fantastic qualifying lap and the fact for no fault of his own he came fourth Ricciardo is for me the best driver. Verstappen was gifted this win by Red Bull’s poor strategy on Ricciardo’s side, lets not forget. Verstappen did a faultless job after the gift but it was a team gift nevertheless.

Verstappen will probably win – and is a worthy winner, but I chose Ricciardo.

Brilliant qualifying and deserved far more than fourth in the race – I tend to think Red Bull gambled on his strategy and it didn’t pay off. But I think his job out there was peerless, so I give it to him.

Carlos Sainz has to be the most underrated driver on the grid..

Today he absolutely trashed Kvyat convincingly. He beat him handily in qualifying, and by no less than 32 seconds in the race. Carlos was even in P3 for the opening 7 laps of the race, while Dan got lapped.

At the other end however, neither Haas or Manors drivers received any votes after rather inconspicuous races, and Valtteri Bottas ended up with very few votes despite a fine drive to fifth.

16 comments on “Landslide Driver of the Weekend win for Verstappen”