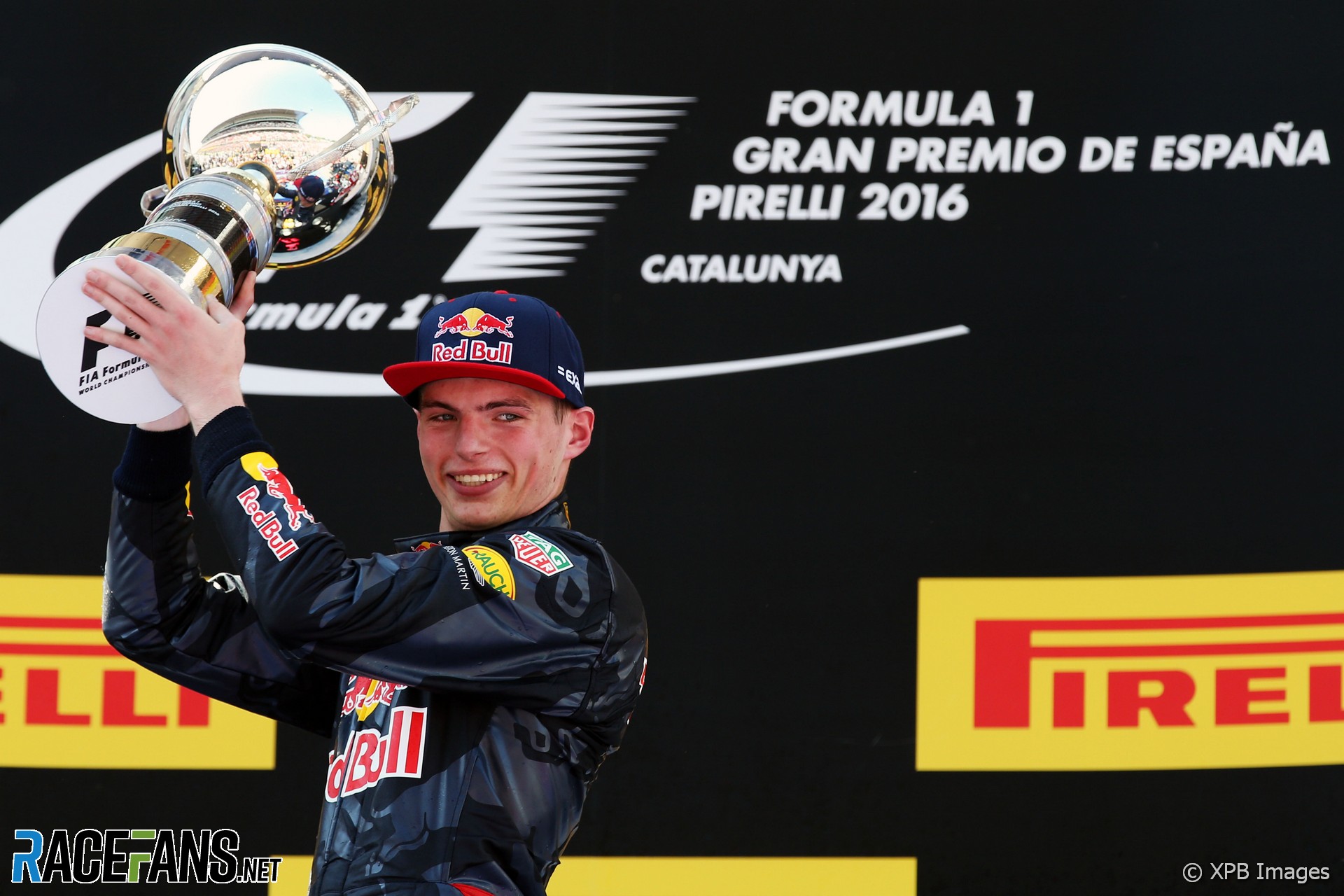 This was how Max Verstappen witnessed the first-lap collision between Lewis Hamilton and Nico Rosberg which eliminated both of the all-conquering W07s in a single, crushing moment for Mercedes.

Like an alignment of the planets, this was the second of three crucial moments which conspired to produce an extraordinary result in the Spanish Grand Prix, one that would have been almost unthinkable when the chequered flag fell on the previous round in Russia two weeks ago.

The first crucial moment happened the previous week, when Daniil Kvyat was elbowed out of Red Bull to make way for 18-year-old Verstappen. The final turning point came on lap 27 of the 2016 Spanish Grand Prix. And it made Max Verstappen a race winner in his first race for his new team.

As the red lights went out and pole sitter Hamilton edged away fractionally quicker than Rosberg, it seemed for a few seconds the world champion was on course to put his shaky start to 2016 behind him. But Rosberg was immediately tucked up into his slipstream, forcing Hamilton to think defensively as they rushed to turn two.

Covering the inside line, Hamilton braked cautiously on the slippery side of the track while Rosberg used all the grip of the racing line to sweep around him. Hamilton’s vital lead was gone.

But perhaps not for long. As Rosberg clung tightly to the inside of turn three Hamilton traced a wider line in clean air, and was gaining. At the exit of the corner Rosberg’s rear light flashed four times. Did Hamilton immediately suss his team mate’s power unit had begun harvesting energy because it was not in the optimal engine mode?

As they headed for turn four Hamilton was 17kph quicker than his team mate. This is more than the spread from the slowest car in the field to the quickest, and explains why Hamilton was gaining so rapidly, even without DRS, at a point on the circuit where overtaking is uncommon.

Rosberg defended his place as firmly as he had done in Bahrain four years ago. But while on that occasion he’d edged Hamilton onto dusty asphalt, this time Hamilton found himself on gripless grass. One Mercedes spun into the other, and both were out. For their rivals, the race was thrown wide open.

The Safety Car was despatched to cover the rescue scene and it picked up the two Red Bull drivers, still in grid order, Daniel Ricciardo ahead of Verstappen. Vettel had briefly separated the pair on lap one, only for Verstappen to reclaim the place.

“I was behind Daniel,” Vettel explained, “I got a lot of understeer, lost a lot of downforce following him so close and Max did a good job, going on the outside, go the clean air and just used it to pass me so well done to him.”

Vettel’s loss of pace in turn three allowed had Carlos Sainz Jnr to claim the scalps of both Ferrari drivers. Having already beaten Kimi Raikkonen off the line he now audaciously drove around the outside of Vettel at turn four while the Mercedes drivers were spinning off.

Raikkonen’s sluggish getaway also lost him a place to Valtteri Bottas untilhe re-passed the Williams on the outside of turn three. He now queued up behind team mate Vettel, but both would have to clear Sainz before they could go hunt Bulls.

Sainz, performing brilliantly in front of his home crowd, kept Vettel at bay until lap eight. Raikkonen didn’t get an easy pass either, Sainz forcing him wide at turn one on lap nine, but the next time by Raikkonen got the job done with DRS.

Once clear of the Toro Rosso the Ferrari drivers were able to match Ricciardo’s pace at the front but not close in. Verstappen held his position just over a second behind. The race now was all about whether Ferrari could use their pace over a stint to forge a path to the front.

The running order was unchanged by the first round of pit stops as all four front runners switched to new medium compound tyres. But while Verstappen had maintained a consistent one-and-a-half second margin to Ricciardo in the opening stint, now Vettel was bearing down on him and Ricciardo.

Lap 24 was a critical one for Ricciardo. Rio Haryanto left the pits in front of him and Ricciardo was close enough to the Manor to be affected by its turbulence. As he reached the end of the lap waved yellow flags for Nico Hulkenberg’s stationary Force India meant he couldn’t pass. And on the long straight the downforce-poor Manor with its class-leading Mercedes engine was in the region of 13kph quicker.

Ricciardo lost nine-tenths of a second, his lap time restricted to 1’31.352 – just four-tenths quicker than Haryanto. The Manor driver waited another whole lap to let the leader through, and when he did he also yielded to Verstappen and Vettel, the leading trio now covered by just two seconds.

Back in clear air, Ricciardo edged a tenth clear of Verstappen on the next lap. But then came the third crucial moment: Red Bull decided to switch one of their drivers to a three-stop strategy – and that driver was Ricciardo.

With 39 laps remaining, it was too big an ask to run to the end on a set of mediums and the hard compound tyre wasn’t quick enough. Ricciardo therefore took a set of soft tyres and banked on a return to the pits for another stop later in the race.

Vettel shadowed his move on the following lap, but the Ferrari driver would be back in just eight laps later. An early switch back to mediums gave him the chance to use the undercut to jump back in front of Ricciardo. The erstwhile race leader’s afternoon was unravelling quickly.

Ricciardo pitted for the final time facing a 23-lap run to the end on mediums. His pace indicated he was just quick enough to catch Verstappen this way assuming he lost no time passing the two Ferraris. This may have been realistic as far as Raikkonen was concerned, as he was now running around on fairly old tyres, but not Vettel, which was Ricciardo’s first target.

Nonetheless Ricciardo gave it his all, including a spectacular lunge on lap 59 which drew a silly response from Vettel on the radio. By now Ricciardo’s situation was looking desperate, and his hopes were finished for good when a puncture sent him into the pits for a fourth time.

Despite that delay Ricciardo still emerged ahead of Bottas. The Williams driver had a quiet day after leapfrogging Sainz through his first pit stop. Following his poor showing in qualifying Felipe Massa used an aggressive three-stop strategy to reclaim eighth place, and spent the final laps contemplating Sergio Perez’s rear wing.

Jenson Button was the only McLaren driver to see the chequered flag, a power unit failure having claimed Fernando Alonso much earlier. The final point went to Kvyat, a meagre consolation prize for the former occupant of the race winner’s car.

Only one Haas saw the chequered flag and for once it was Esteban Gutierrez instead of Romain Grosjean. However his mammoth 35-lap stint on mediums was to no avail – he slipped from ninth to eleventh with four laps to go. Marcus Ericsson was too far back to take advantage.

Jolyon Palmer had impressively passed Gutierrez early in the race but ended the grand prix in a contretemps with his own team mate. Kevin Magnussen was penalised for the contact between the pair four corners from home, promoting Nasr to 14th behind Palmer.

The two Manors brought up the rear, Pascal Wehrlein leading home Haryanto again. Following his inadvertent role in deciding the outcome of the race Haryanto has also earned the ire of Button. “I know he thinks he’s quick but he’s not” was the McLaren driver’s withering assessment.

During his brief rise through the junior categories of racing Verstappen’s battling style was his trademark. His daring, late-braking passes thrilled F1 fans last year.

But in this breakthrough victory – the youngest for any F1 driver and the first for the Netherlands – he had little cause to display much of his characteristic flair. That vital first-lap move on Vettel was the only time he had to get his elbows out.

What was most ominous for Verstappen’s rivals was the immediate ease with which he was on Ricciardo’s pace in Spain. With a world champion filling his mirrors Verstappen never came off his line, never locked a brake, he brought the car home as if he’d done it a dozen times before.

Yes a few things had to fall his way for things to work out the way they did, but what matters is he was there in the first place.

Ten days ago Red Bull decided his predecessor wasn’t up to that task and they made the tough call to swap them around. They took a lot of flak for it – just as they did when they hired Verstappen in the first place.

But my, hasn’t it paid off?