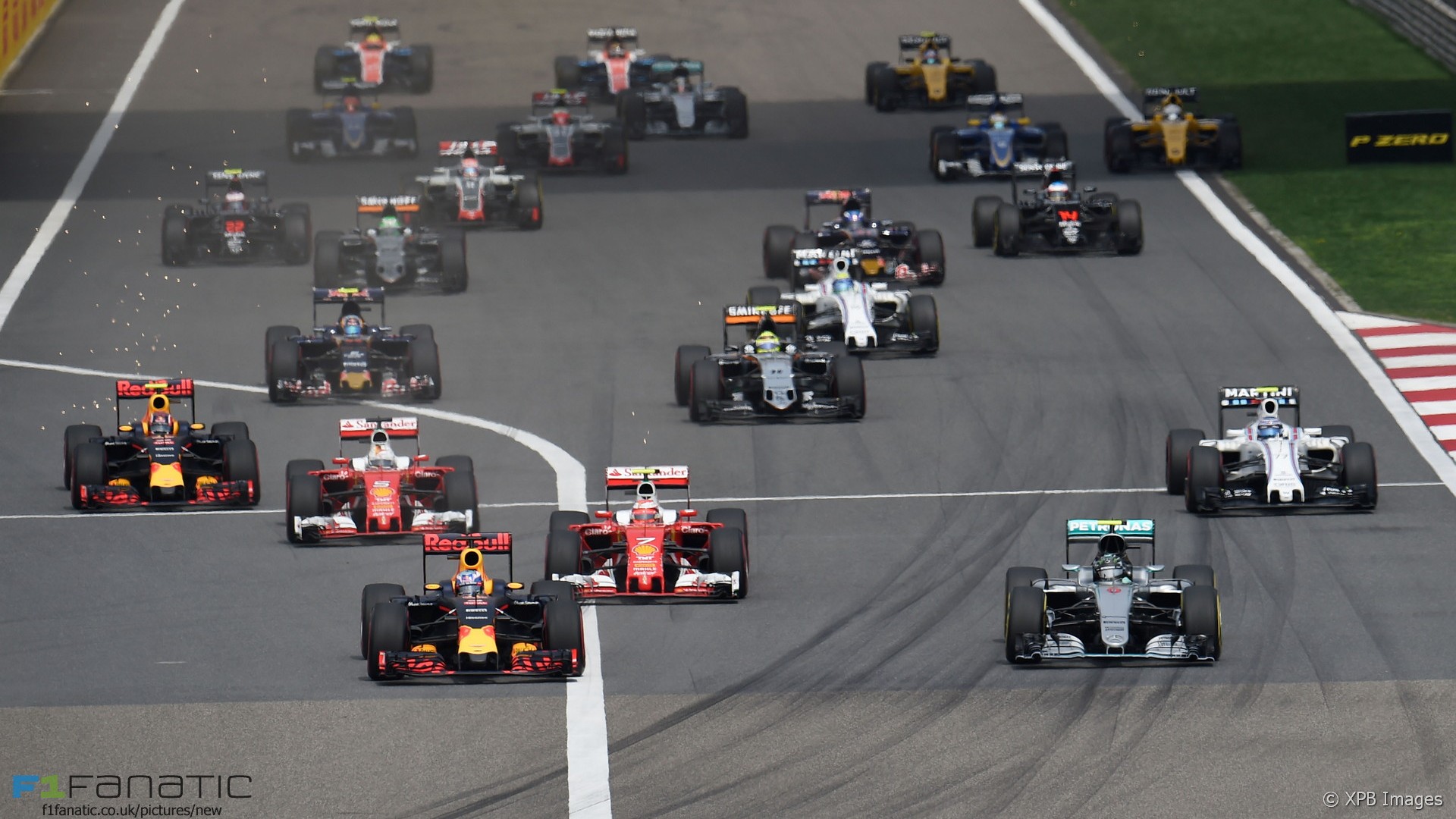 Which F1 driver was the best performer during the Chinese Grand Prix weekend?

Lewis Hamilton – A handful of off-track moments indicated he was less than happy with the car on Friday. But he might as well have stayed in bed on Saturday as a power unit fault wrecked his qualifying attempt. After picking up front wing damage in the first corner melee Hamilton was still in 21st place when the race restarted. Racing a wounded car once again – Hamilton suspected damage to his suspension as well as aerodynamics, and said the W07 “seemed to be flexing all over the place” – he nonetheless got stuck into the midfield and ran as high as third at one point. However he was forced to use medium tyres for his final stint which confined him to seventh place.

Nico Rosberg – With Hamilton compromised and Ferrari tripping up in qualifying, Rosberg was looking at an open net. He delivered on Sunday with a clean second run in Q3 to take his first pole position of the year, and had the added bonus of being able to start the race on soft tyres thanks to Mercedes’ performance advantage in Q2. The Safety Car meant he wasn’t able to take full advantage of the strategy, but with all his major rivals tripping up at the start a sixth straight win was never in doubt.

Sebastian Vettel – Desiring a fresh set of soft tyres for the race, Vettel elected to do a single run in Q3. The gamble didn’t pay off: he took fourth. Squeezed between Raikkonen and Kvyat at the start, Vettel was clearly embarrassed to knock his team mate into a race-ruining spin. From then on he got his act together, passing two cars on the way into the pits and plenty more after he came back out on super-softs. That meant he was able to use softs for the final stint, which put him at an advantage when he left the pits behind the medium-tyres Kvyat. Vettel took him for second on his out-lap.

Kimi Raikkonen – As was also the case last year, Raikkonen seemed the more comfortable of the two Ferrari drivers. He even headed the times after his first run in Q3, but slipped up on his final run and was bumped down to third. But his race was wrecked when Vettel hit him at the first corner. Despite a damaged car, Raikkonen got back up into the top five, though his tyres went off several laps before the end of his final 19-lap stint on softs.

Felipe Massa – His Friday running was disrupted by two left-rear tyre blow-outs. He also did not have use of the FW38’s new front wing and was caught out by the red flag in Q2: the upshot was he missed a place in Q3. He got ahead off Bottas at the start, however, and stayed there until the end, though Raikkonen bumped him down to sixth.

Valtteri Bottas – Rob Smedley praised his run to fifth on the grid which, aided by the new front wing, seemed the best the Williams was capable of. Bottas was delayed by the first corner crash, however, and struggled for pace on the medium tyre in his final stint. Raikkonen and the two Toro Rosso drivers relegated him to tenth.

Daniel Ricciardo – Ricciardo fancied Red Bull’s chances of taking a Ferrari or Mercedes scalp if it rained during qualifying, but beating both SF16-Hs in the dry was an outstanding performance. He took the lead at the start thanks to his super-soft tyres but they let him down two laps later – a puncture forcing him into the pits. The appearance of the Safety Car moments later was a double-whammy. But a feisty drive through the field eventually yielded fourth place. Crucially he kept Hamilton behind early on then passed the Mercedes with a gutsy move at turn six.

Daniil Kvyat – While his team mate hit new heights on Saturday, Kvyat quietly enjoy by far his most convincing qualifying performance of the year. He made a quick start and surprised the Ferraris with a pass which was legitimate despite Vettel’s over-strenuous protestations. Had it been the other car running second at the restart Ricciardo might have had the pace to keep Vettel behind, but having to run the medium tyres at the final stint made life tricky for Kvyat.

Nico Hulkenberg – Was unable to participate in Q3 after a wheel fell off his car at the end of Q2, which also earned him a three-place grid penalty. He jumped up to fifth at the start but had to queue behind Perez in the pits and made the mistake of backing off on his way in, which earned him another penalty. “The rules say you shouldn’t slow down coming in,” he admitted, “but in the heat of racing it’s hard to gauge if that is giving you an advantage”. He finish a lowly 15th.

Sergio Perez – Overnight changes on Friday produced a better-handling car for Perez and he pronounced himself happy after taking seventh on the grid. That became fourth after lap one and he was still ninth after the Safety Car, but he lacked the pace to get back where he had been and lost so much ground he ended up out of the points in another disappointing weekend for Force India.

Kevin Magnussen – Renault were well off the pace in China and both cars failed to make the cut for Q2. Magnussen started 17th and finished there. “This isn’t a weekend that we will be very happy about.”

Jolyon Palmer – The other Renault driver was even less happy after being the last driver to see the chequered flag. “The balance of the car was all over the place,” he said, “tyre degradation was bigger than usual and the pace wasn’t as good as previous races”.

Max Verstappen – Qualifying in the lower reaches of Q3 is not an advantageous place these days, and so it proved for Verstappen after lining up ninth. Lost ground at the start plus the timing of the Safety Car and being held up by Hulkenberg in the pits left him 20th by lap nine. Remarkably, he still managed to finish higher than he started, moving ahead of his team mate plus Perez and Bottas to take the flag in eighth place.

Carlos Sainz Jnr – Having out-qualified Verstappen, Sainz ended up on the medium tyres for longer than his team mate at the end of the race which explains how his team mate was able to get back ahead of him. Despite that he took Bottas for ninth on the final lap.

Marcus Ericsson – At a track where the C35 was more competitive Ericsson led the team’s charge in qualifying, reaching Q2 and taking 15th. Tried to use two medium tyre stints to break into the points but didn’t have the pace despite a clean race.

Felipe Nasr – Picked up damage in the first corner incident which compromised his race, but he was pessimistic about reaching the points anyway. “I am still struggling with the same issues that I’ve been having in the last couple of events,” he admitted.

Fernando Alonso – Returned to action despite some rib pain but was disappointed by the red flags in Q2 which ruined his and Button’s hopes of making the final ten. Having stayed out of trouble at the start the Safety Car allowed him to run third, but his pace on two medium-tyre stints wasn’t quick enough to deliver his first points of the year.

Jenson Button – One of few drivers to start the race on new super-soft tyres, Button headed for the pits when the Safety Car came out but lost time behind Hulkenberg. Like Alonso he couldn’t find the necessary pace on mediums, so he tried a run on super-softs at the end but still ended up following his team mate home.

Pascal Wehrlein – Had an embarrassing crash in qualifying when his car snapped out of control on a damp bump on the pit straight. “I guess I was just unlucky as there was nothing I could do,” he said. But he made another great start, gaining six places, and staying out during the Safety Car briefly put him fourth. He was only ever going to slip back from there, however, and despite sticking to the softer compounds he was 18th at the flag.

Rio Haryanto – Wasn’t pleased with his qualifying run which was partly compromised by his team mate bringing the red flags out. He held off the struggling Palmer for 21st place after a trouble-free run.

Romain Grosjean – His points-scoring run for Haas was halted after first-corner contact damaged his front wing. Unhappy with his car’s balance from that point on. Grosjean urged his team to retire his car in the final laps.

Esteban Gutierrez – Saw the chequered flag for the first time this year and was well ahead of his team mate in 14th despite his Drag Reduction System not working.

Who was the best driver of the 2015 Chinese Grand Prix weekend?