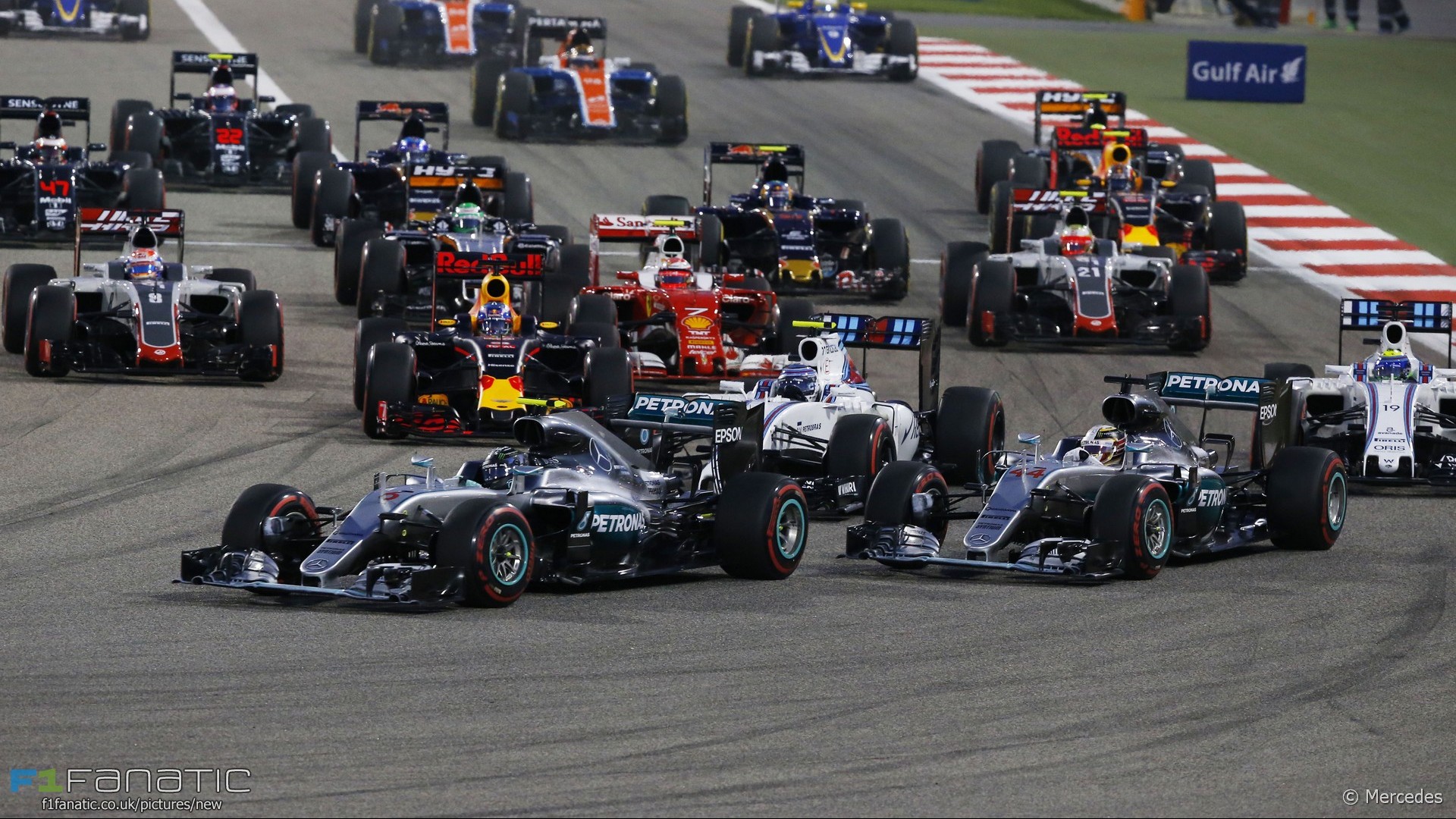 The future of F1’s unpopular new qualifying format is being discussed again by teams today. But while Saturday was short on action again most of you enjoyed the Bahrain Grand Prix.

This was despite an anti-climactic start to proceedings in Bahrain when Sebastian Vettel – the closest threat to Mercedes on the grid – pulled over halfway around the formation lap.

But when the lights went out the Bahrain Grand Prix served up more surprises. Lewis Hamilton tangled with a Williams and Kimi Raikkonen dropped back into the pack. While those two climbed their way back to the podium Nico Rosberg cruised to the chequered. Meanwhile the action in the midfield came thick and fast.

F1 Fanatic readers gave the rating an average score of 7.38 out of ten – almost exactly the same as the race received 12 months ago. Here’s a sample of your verdicts on the race:

Did tyre rules ‘improve the show’…

Bahrain was our first real chance to see how F1’s new tyre rules shaped a race without the interruption of a Safety Car or red flag.

I have to say, the new tyre rules have helped the racing immense. Even just having the increased number of options increases the intrigue, even if the top three basically had the same strategy by the end.
@pwaa

The new tyres open up so much potential for actual wheel to wheel racing, the best new rule in many years.
@melkurion

The Bad: Vettel’s engine going on the parade lap – he probably could’ve taken it to Rosberg. Empty grandstands.
@synapseza

…or was this more ‘fake racing’?

Some people felt the amount of pit stops and tyres were hard to follow. Should we need to have a tablet on hand to follow a race? More on-screen graphics? Or just simpler rules?

So many pit stops made the race thoroughly confusing. Ended up not knowing whether positions were earned by merit or strategy, same with most of the overtakes.
@ceevee

It was a decent endurance race – but tyre management central of course.

This has to stop – we need on-the-limit racing for most of the race – if you have voted more highly, you’re bound to have discovered F1 quite recently and/or don’t realise that the sport is largely contrived now. Far too much aero – totally the wrong tyre for the exercise. The World Endurance Championship is more exciting.
@nickfrog

The first ten laps or so were good but the race after that completely showed everything that is wrong with modern F1 racing.

Too many pit stops made it difficult to follow what was happening most of the time, and pretty much every overtake was down to a big pace difference almost exclusively caused by one driver being on tyres of much lower use and/or a much quicker compound, with DRS just making it a formality.

This is not exciting, it is ‘false’ racing. The Formula E race from Long Beach the night before and the Moto GP, Moto 2 and Moto 3 races from Argentina were much, much better quality, proper racing, even with the annoying but necessary pit stops in the Formula E and Moto GP races.
@rob91

Quiet at the sharp end

How good a race can it be if the leader is unchallenged throughout?

A solid score, lots of action but not so much at the front.
@uneedafinn2win

Plenty of action, a dramatic start, sparks flying everywhere. It felt like F1 again today. It’s maybe something to do with this generation of cars, but Bahrain is emerging to be a pretty good track after all. The race needed a better challenge for the lead to be honest, but the extra tyre option seemed to shake things up a little today.
@electrolite

I really enjoyed that. OK the fight for the lead/win wasn’t there but there was tons of great racing through the field for most of the race which made it thoroughly enjoyable.
@stefmeister

With world champions Alonso, Vettel and Button out of the race and Hamilton compromised, many of you appreciated this opportunity for the young future stars to shine.

This race to a large extent was saved by young bloods such as Vandoorne, Magnussen, Wehrlein and Verstappen. Shouldn’t that be an argument to have them participate more?
Tata

17 comments on “Another decent race despite qualifying gloom”