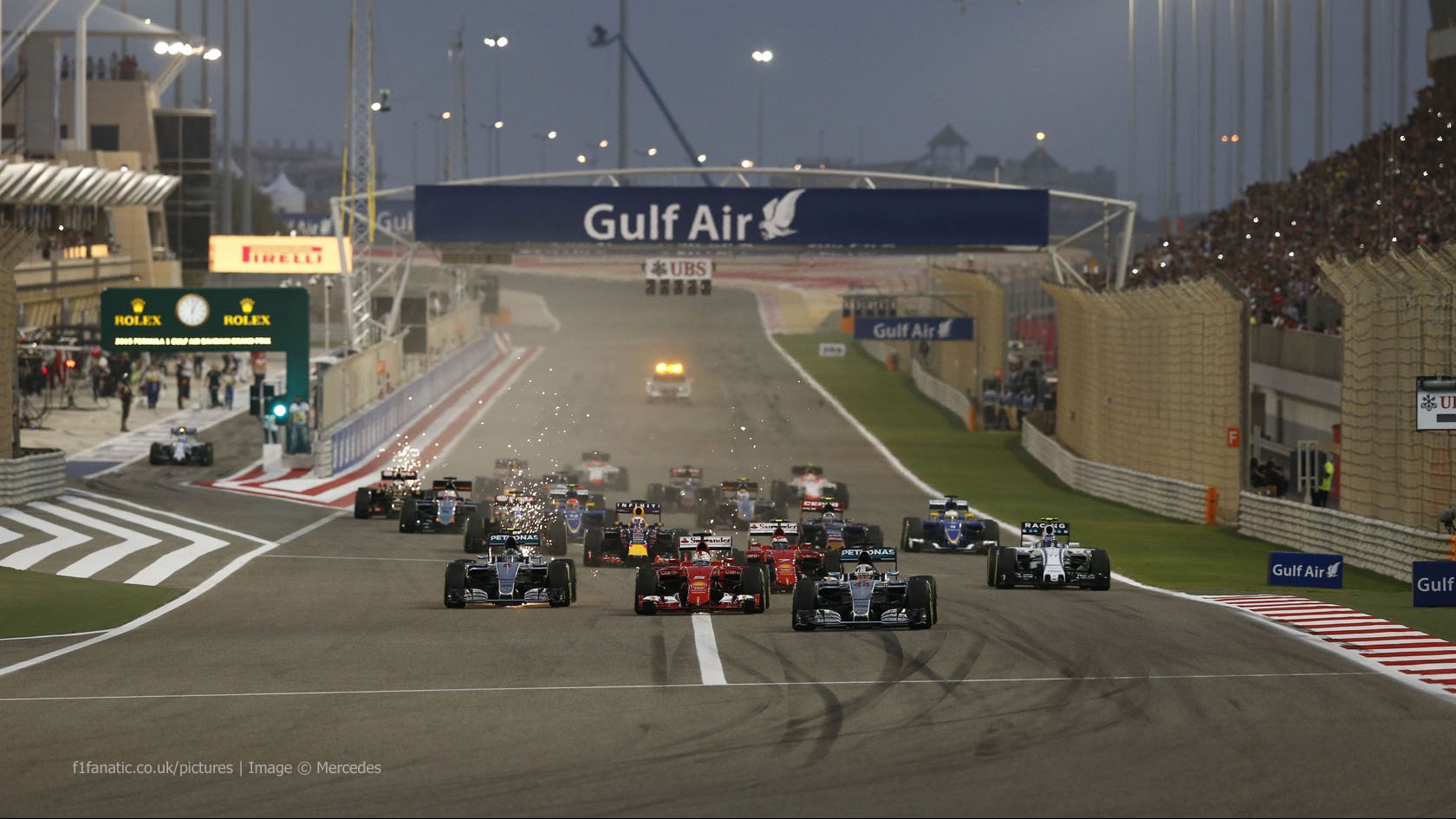 Here’s how the teams line up for the Bahrain Grand Prix.

Nico Rosberg say the first race of the year showed Mercedes has to take its rivals seriously. “Ferrari were a real threat all weekend in Melbourne,” he said, “and it’s clear that we’ve got a big battle on our hands.”

Brake problems gave them team a scare at this race last year and while Lewis Hamilton hung on to win it cost Rosberg second place. In a similar situation this year the new radio restrictions would leave managing the problem down to the drivers.

This was arguably Kimi Raikkonen’s best race of last season and one he came close to winning. His race pace in Australia was good until a turbo problem put him out.

A key question ahead of the race will be whether Mercedes has an answer for the phenomenal starts both Ferraris made in Melbourne. Containing both of them at Bahrain’s wide first corner may prove difficult.

Australia indicated Williams face a stiff challenge from the likes of Red Bull and Toro Rosso but the longer straights of Bahrain should tip the balance in their favour this weekend. The circuit will also prove an important test of what gains they’ve made with their slow-corner performance.

Like Ferrari, Williams have selected three sets of medium tyres, so we could see a lot of running from them during practice.

Last year’s Bahrain Grand Prix ended with Daniel Ricciardo’s Renault engine expiring at the finishing line. Its performance and reliability appeared to have improved – it was 4kph closer to the Mercedes in Australia than last year.

That allied to the Red Bull’s qualities on the softer tyres should mean they have a less painful weekend in Bahrain this time.

“On paper Bahrain should be a strong track for us,” said team principal Vijay Mallya. Force India has a new aerodynamic package for the front of its car arriving this weekend.

It may be optimistic to expect a repeat of Sergio Perez’s run to third place in 2014, but expect a competitive showing from him and Nico Hulkenberg.

Bahrain is “not the most exciting track” according to Kevin Magnussen. It may also expose the weaknesses of the Renault package more sharply than Melbourne did.

Although the RS16 chassis is “very driveable”, Magnussen says, he also believes “it is not fast enough to be on the podium or even in Q3”. “But it’s a good car that handles well and it’s something we will continue to work on,” he added.

The great work done by the team in making a late change of engine supplier and putting a competitive car on the track for the first race was undone by poor strategy and driver management in Australia. Max Verstappen ran fourth early in the race but the team’s cars came home at the foot of the top ten.

Verstappen will also need a bit of management following his mid-race outburst. He and Carlos Sainz Jnr will be consoled by the knowledge they’ll be less vulnerable on Bahrain’s straights this year.

There wasn’t an awful lot of encouragement to draw from Sauber’s first race weekend of the year. While fellow 2016 Ferrari power unit users Haas grabbed a dream points finish neither Sauber driver looked like troubling the top ten.

After a reduced pre-season testing programme due to the late arrival of their car, and rain during practice in Australia, Bahrain should at least give them an opportunity to conduct some more meaningful running with the C35.

Fernando Alonso’s violent accident in Australia left the team down a chassis and a power unit – and on Thursday came the new Alonso too has been ruled out of racing this weekend. While he might have battled through the pain of his fractured ribs, the possibility of them causing a more grievous injury if he were to crash again was wisely judged a risk not worth taking.

So for the second year in a row Alonso will sit out a race at the beginning of the season. In his place comes Stoffel Vandoorne, one of the most exciting junior talents on the periphery of Formula One. Over the last four years he has beaten Daniil Kvyat to the Formula Renault 2.0 Eurocup crown, finished runner-up in Formula Renault 3.5 as a rookie to Kevin Magnussen, finished runner-up in GP2 as a rookie to Jolyon Palmer, and then last season scored the most dominant GP2 title win in the 11-year history of the championship.

Vandoorne has had several opportunities to drive the team’s F1 cars and won all three GP2 feature races he started in Bahrain. It’s not hard to see why many expect big things of his grand prix debut, even if it has come in unfortunate circumstances.

Needing to get more mileage on their MRT-05, Manor has again opted for a generous helping of the harder compound tyres this weekend with the aim of getting plenty of practice running done.

With a somewhat basic chassis but the best power unit in the pit lane, Bahrain’s long straights will make an interesting benchmark of the team’s progress compared to 12 months ago, when it was over six seconds off the pace.

Despite their stunning result in Australia, Haas need to be realistic about their chances for the rest of the season. “We won’t finish sixth every weekend,” admitted team principal Guenther Steiner, “so we need to be careful with our expectations”.

The team appeared to underperform in their first qualifying session. With the elimination system remaining for this weekend both drivers will have to produce their best on their first attempt to stand any chance of reaching Q2.

Are you going to the Bahrain Grand Prix?

If you’re heading to Bahrain for this weekend’s race, we want to hear from you.

Who do you think will be the team to beat in the Bahrain Grand Prix? Have your say below.