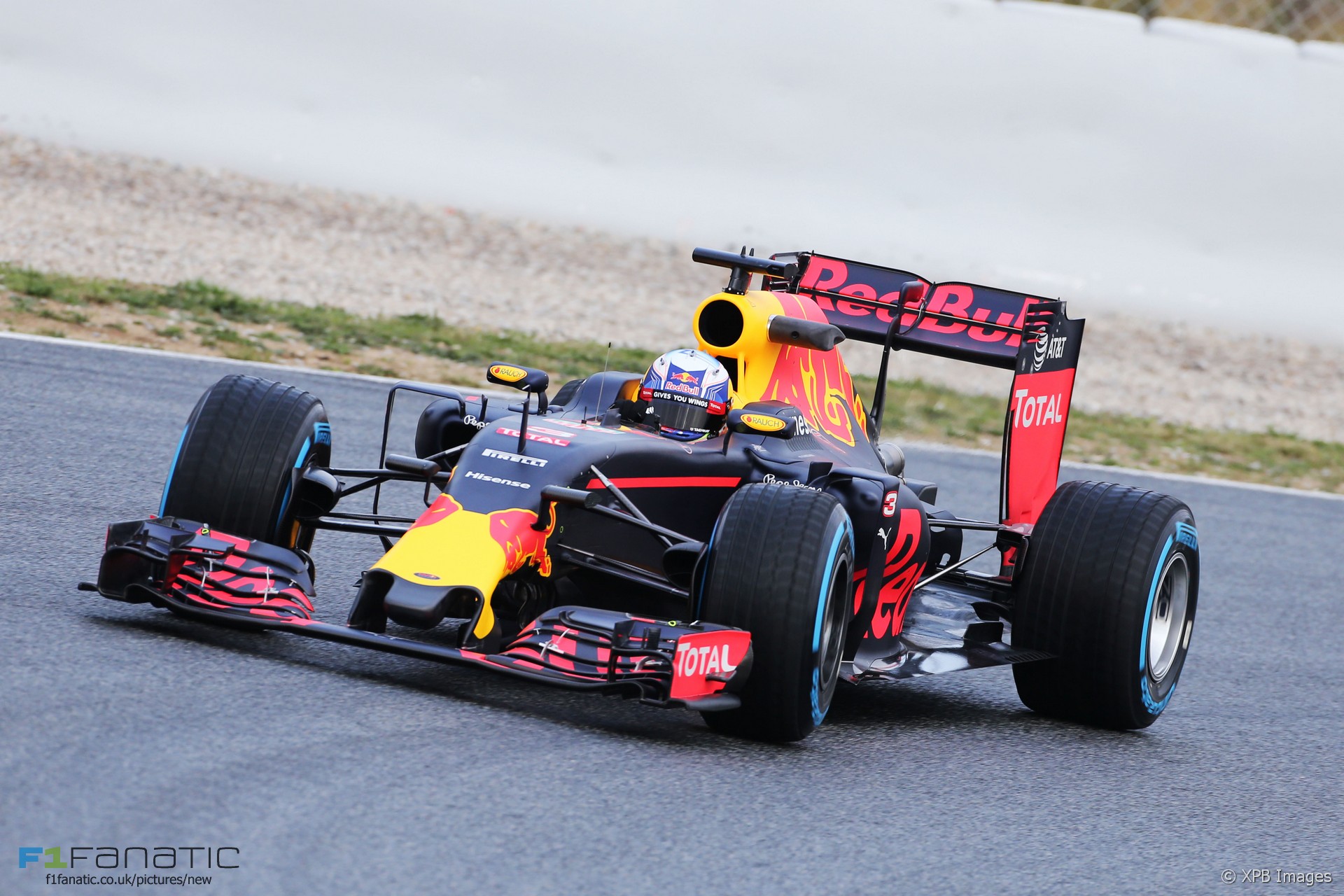 Although Red Bull’s shortcomings were mostly on the power unit side last year they also had problems with their handling at the beginning of the season, something which was largely cured by a mid-season upgrade.

Therefore it was little surprise to see to the team reveal a largely evolutionary RB12 at the Circuit de Catalunya on Tuesday. But with doubts over the performance of its TAG Heuer-badged Renault engine, the team has indicated it may lag behind junior squad Toro Rosso at the beginning of the year.

Restrictive rules make it harder for teams to make up for poor power unit performance with superior aerodynamics. But if any team is going to find a way it’s this one.

As usual Red Bull completed the crash testing of their car very late. However this wasn’t just because they were pushing the limit of what could be achieved: the team only settled on an engine supplier late in 2015,. The decision to remain with Renault at least meant less disruption to their development process than if they had switched, as sister outfit Toro Rosso has.

The front end of the car is outwardly very similar to what the team raced at the end of last season, albeit coated in their sleek new matte finish. Expect there to be many developments still in the pipeline in Milton Keynes.

As usual Red Bull have pointed the way for their rivals in aerodynamic philosophy. Having been one of the first teams to adopt a steeply sloped nose with a ‘thumb tip’ – and having developed a particularly aggressive implementation of it – they have produced an evolution of the design for this year.

Red Bull have always orientated their chassis design around getting a high volume of flow underneath the car, so don’t expect them to follow the Mercedes-style low and thin nose any time soon.

The S-duct is an area to keep a close eye on for developments between now and the first race of the year as the team have always had a keen interest in this region and have further developed the duct since Sauber introduced it in 2012.

In the third year of largely stable aerodynamic regulations, F1’s best-resourced teams are seeking gains in ever-smaller areas. Brake ducts are one of them. While their main function is to cool the brakes, like every external surface they can also be used to shape the car’s airflow and ultimately improve cornering performance.

Red Bull have further refined their 2015 set-up with subtle adjustments to the front bell mouth inlet and more major changes to the rear layout. More extravagant turning vanes and flick-ups have been used to capture air and use it to do work on the tyre. The rear ducts have a series of small winglets rising up the back of them to generate further downforce, which is all the more effective for being transmitted directly to the tyre, avoding the suspension.

Red Bull have started off the winter testing period using the blown front axle. This is when air is channelled through the brake duct inlets but instead of cooling the brakes it is bypassed into a hollow front axle before exiting out of the open wheel nut face. This helps the front wing push airflow out and around the front tyre and frontal area of the sidepods for use further back.

Some minor alterations have been made to the sidepods over last year, with the bodywork pinching slightly tighter to the internals. The advantage of the Renault power unit is its thermal efficiency, despite their troubled start to the hybrid era where overheating was a big problem. This means that there is only so much Red Bull can do to close up the bodywork to improve the aerodynamics.

Further rearward, new apertures have been made into the bodywork to accommodate the new rear suspension geometry, although the central rear heat outlet remains largely unchanged over its predecessor.

The airbox is more circular for 2016 as Red Bull appear to have made the transition away from their elliptical designs during their peak of success. Beneath it is another large inlet just behind the driver’s head that is responsible for cooling some of the ERS components.

Again Red Bull have not opted to shrink-wrap the engine cover around the internals and have instead gone for a more rounded look similar to the McLaren MP4-31. Although it is surprising, it clearly works with how the airflow is fed towards the rear wing, and is perhaps not as sensitive in yaw as a proper shark fin.

Perhaps the most interesting feature on the RB12 is the change in rear suspension geometry. Last year Red Bull made big changes to the front suspension kinematics and it appears as if they have followed this up with further adjustments to the rear end.

The inclination of the wishbones are far less steep, quite flat actually. This will raise the rear roll centre centre slightly, which will decrease the load on the rear tyres under acceleration. The Red Bull had good traction last year but perhaps with the aero figures they are expecting this year they may have wanted to protect the rear tyres more at high speed with this geometry change.

The floor has been by far the biggest change to the Red Bull for 2016, featuring a new diffuse and tyre squirt slots.

The top of the diffuser is completely straight across its entire length, whereas previously there was a small decline at its centre around the rear crash structure. The Gurney flap that surrounds it is less rounded at the peripheries of the floor, too, although the fences on the underside of the car have been retained from 2015 at the moment.

Red Bull have also ditched the L-shaped slots in the floor ahead of the rear tyre and followed the direction Ferrari have taken by installing a series of smaller slits to control tyre squirt.

Red Bull’s exhaust design is intriguing: it has two wastegate pipes in the inverted ‘Mickey Mouse’ shape like most of the grid, but the Renault factory team has just the single pipe above the main exhaust outlet. The two teams share exactly the same engine.

Perhaps Renault’s original layout was composed of a single wastegate but Red Bull had the option to develop it and add an additional one. Two wastegates provide better control of boost pressure but the single pipe has a marginal aerodynamic gain as the bodywork can hug the car tighter. This may prove another area for refinement during 2016.