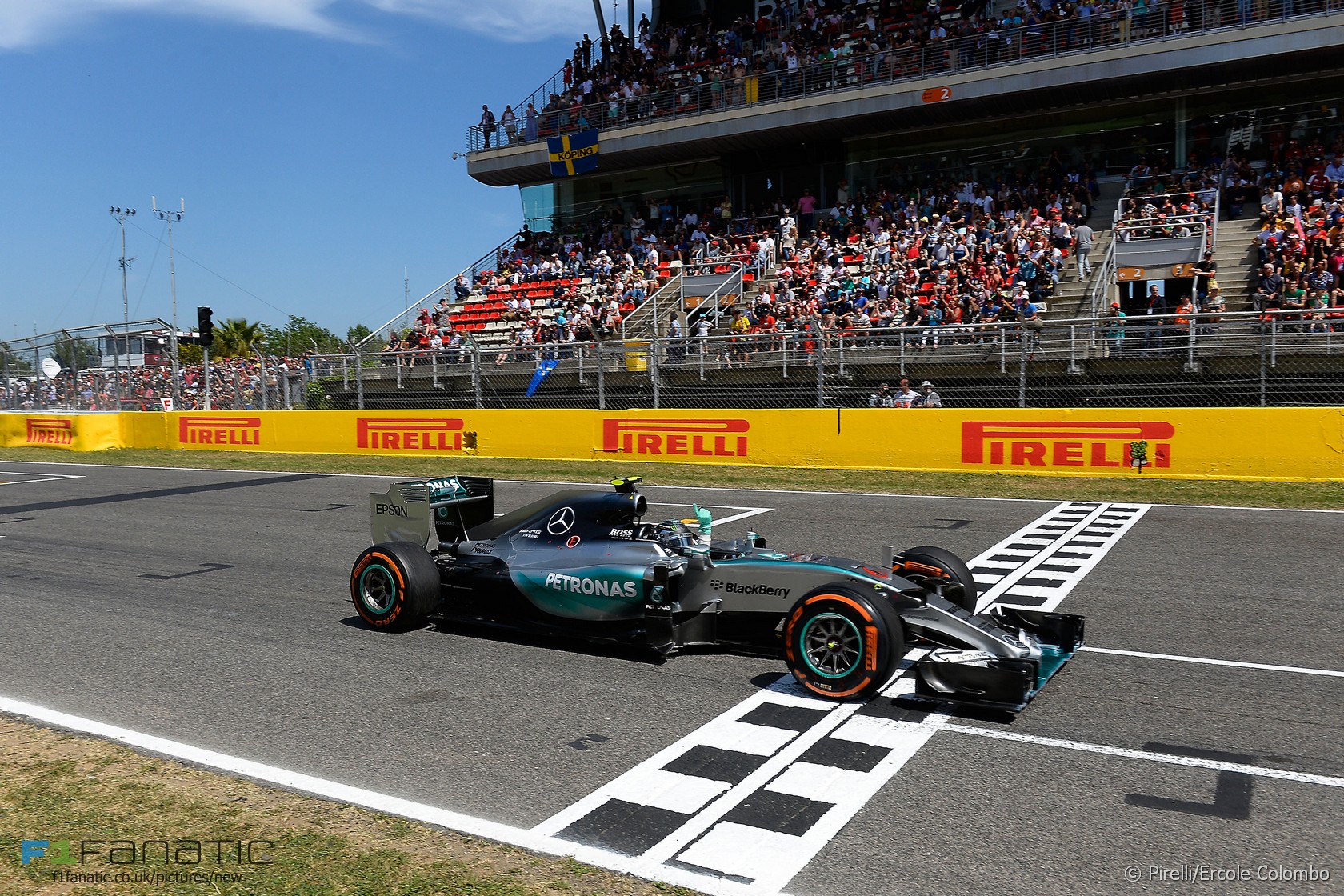 Formula One’s popularity has been slipping for years and among those in charge there is little agreement what the causes are.

What do you think is driving people away from F1? Which are the most and least important factors?

Much attention has been focused on Formula One’s television audience figures, which have been in almost constant decline since 2008.

Do these figures give us a reliable indication of F1’s popularity problems? With more people watching F1 online it may be that more viewers are not showing up here and the decline is much less or perhaps not even real.

However not all measures of Formula One’s online performance are as positive. The Google Trends graph below which shows the relative popularity of the search term ‘Formula 1’ shows a steady increase in its popularity until around 2010, followed by a more swift reversal:

If we accept there is an underlying decline in F1’s popularity, how do we explain it? The following suggestions were generated based on F1 Fanatic readers’ responses to past articles:

Formula One Management has increasingly moved away from free-to-air television broadcasts for F1, including in several markets where the sport has always been popular, including Britain and Italy. The increased cost of following the sport, and the loss of promotion on channels which can be watched for free, has been blamed for declining viewing figures in those countries.

However the effect of this change is limited only to countries which had free-to-air broadcasts in the first place. In the USA, a market Formula One has struggled to break into, television figures are on the rise following its switch to the NBCSN channel.

Car manufacturers Honda, Toyota, BMW and Renault scrapped their well-backed and heavily-promoted factory squads (though some have since returned). Meanwhile and the high cost of competition and poor remuneration for all but a chosen few teams has made for an uncompetitive midfield.

In four of the last five seasons there was little doubt over the outcome of the drivers’ championship. While Red Bull dominated the early 2010s, Mercedes have crushed the competition to an even greater degree over the last two years. However the sight of one team dominating is nothing new in F1.

The loss of heritage races and threats to events such as those in Germany and Italy has undermined F1’s popularity in countries which were once its heartlands. New events in venues such Abu Dhabi, Russia, India and South Korea have failed to capture the imagination – and some lasted only a few years before being dropped.

An ever-longer calendar – which will reach a record 21 events in 2016 – has diluted interest and created a sense of fatigue around the championship, and increased the probability that the championship won’t be decided at the last race. Although some additions to the calendar have been more successful – notably Singapore, USA and Mexico.

Taking a family to a Formula One race for a weekend can run to thousands of pounds in ticket prices alone before accommodation, travel, food and everything else have been paid for. It’s a common cause for complaint among fans.

However that doesn’t stop many races on the calendar from boasting capacity crowds. And as many fans can’t get to races or only watch them on television, this may be a problem which only affects a limited number of people.

New Formula One tracks increasingly seem to have come from the same template with many slow turns and few opportunities for Formula One cars to demonstrate their formidable cornering capabilities.

Classic circuits are an increasingly rare breed as they are toned down to meet modern safety standards. That means fast corners are bypassed or slowed by chicanes and gravel beds replaced with forgiving asphalt run-offs.

Formula One car designers have been straitjacketed by rules which prevent them from exploring radical new solutions. The days of revolutionary breakthroughs such as active suspension are long behind us.

What innovations do appear tend to be quickly snuffed out by the rule-writers. The introduction of V6 hybrid turbo engines in 2014 moved F1 back to the cutting edge of engine development, albeit within tightly prescribed parameters – and with some undesirable side-effects.

The latest generation of engines are somewhat less raucous than their predecessors, which to some is the gravest problem facing F1 at the moment. The spectacle of a live F1 race has certainly been affected by the quieter engines, but some fans have welcomed the reduction in volume, saying it makes it easier to hear the track commentary.

Alterations to the engine designs for this year are expected to boost the volume once more. But is it likely to affect any more than the small percentage of F1 fans who actually make it to races?

Formula One ushered in a new generation of car design in 2009 which produced an unusual new crop of cars with narrow, high rear wings and low, wide front wings. These strange creations became truly weird when the FIA tried to place new limits on front nose design, resulting in the ‘stepped’ look of 2012 and the ‘proboscis’ (to put it politely) cars of 2014.

Plans are afoot for a shake-up of car design next year which may address some of these problems. However it is unlikely to address another common complaint – the gradually converging designs of the cars.

Desperate to “improve the show”, Formula One has introduced more gimmicks to the racing in recent years. These include the Drag Reduction System – a quantity-over-quality ‘solution’ to the difficulties of overtaking – plus designed-to-degrade tyres.

F1’s flirtation with double points for the last race in 2014 was a sign of utter desperation when it came to putting entertainment before sport in the name of increasing viewing figures. It may be that only the most committed fans care whether the action is authentic or not, but F1’s continuing decline in popularity suggests if gimmicks aren’t the cause they may not be the solution either.

Formula One lap times have tended to increase since around 2005 as engine sizes have been reduced, aerodynamics cut back and tyre war rubber replaced with ‘designed to degrade’ compounds. The banning of in-race refuelling has further slowed the cars in the early stages of races.

The result is cars which are visibly not being driving to the limit during grands prix – which is often the case due to the need to conserve fuel or look after the car. Again, perhaps only dedicated fans can tell the difference – or perhaps the fact drivers are operating so far within themselves is why races tend to be undramatic.

There’s no question who’s number one in Formula One when it comes to popularity. Ferrari have been around the longest and won the most – but not recently. Their last championship victory was eight years ago and none of their drivers have taken the title since Kimi Raikkonen in 2007.

There may be ten other teams on the grid this year but for some fans there’s only one that matters and if Ferrari isn’t winning, F1 may be much less appealing.

The level of interest in Nico Hulkenberg’s Le Mans triumph last year showed a growing popular awareness of the motor racing world beyond Formula One.

The FIA has given its new Formula E championship a big push and Juan Pablo Montoya’s return to single-seaters has been great news for America’s IndyCar championship. Put all three together and you won’t get as big an audience as F1 has, but those searching for high-tech motorsport or quality racing action may find more appealing alternatives.

From the mystifying new tyre rules to bans on drivers changing their helmet designs the F1 rulebook is awash with dense, arbitrary restrictions. The sport’s capacity to surprise has been erased by a swathe of rules governing everything drivers can and can’t do.

Last year the high number of penalties issued for power unit component changes prompted much criticism and led to a mid-season easing of the rules. But complex new superlicence restrictions provided another example of regulations being used as the ‘solution’ for everything.

Lack of interest in drivers

Complaints about pay drivers is another sign of how fans find some drivers unworthy of their support or interest – and that’s not good for the wider sport.

While Formula One Management has begun to embrace social media in the last 12 months it has lagged years behind other sports and is still very limited in its activities. This has kept a new generation of young sports fans at a distance from F1.

And many who do follow F1 through new media may be difficult to trace, especially due to the rise in people using illegal pirate streams to watch races.

F1 is an expensive business and where money goes politics follows. But perhaps now more than ever this is clearly to the detriment of the racing spectacle.

The awarding of huge financial bonuses to certain teams irrespective of their performance has made it increasingly difficult for their less well-favoured rivals to compete. Two teams are even alleging anti-competitive practices in the writing of F1’s rules and the awarding of prize monies. Who would want to watch a rigged game?

Which of the following do you think are the most significant factors in F1’s declining popularity? And which ones do you think are not that important but perhaps receive too much attention?

Vote for as many as you wish, explain your choices and suggest further explanations in the comments.

What are the most significant causes of F1's popularity slump?