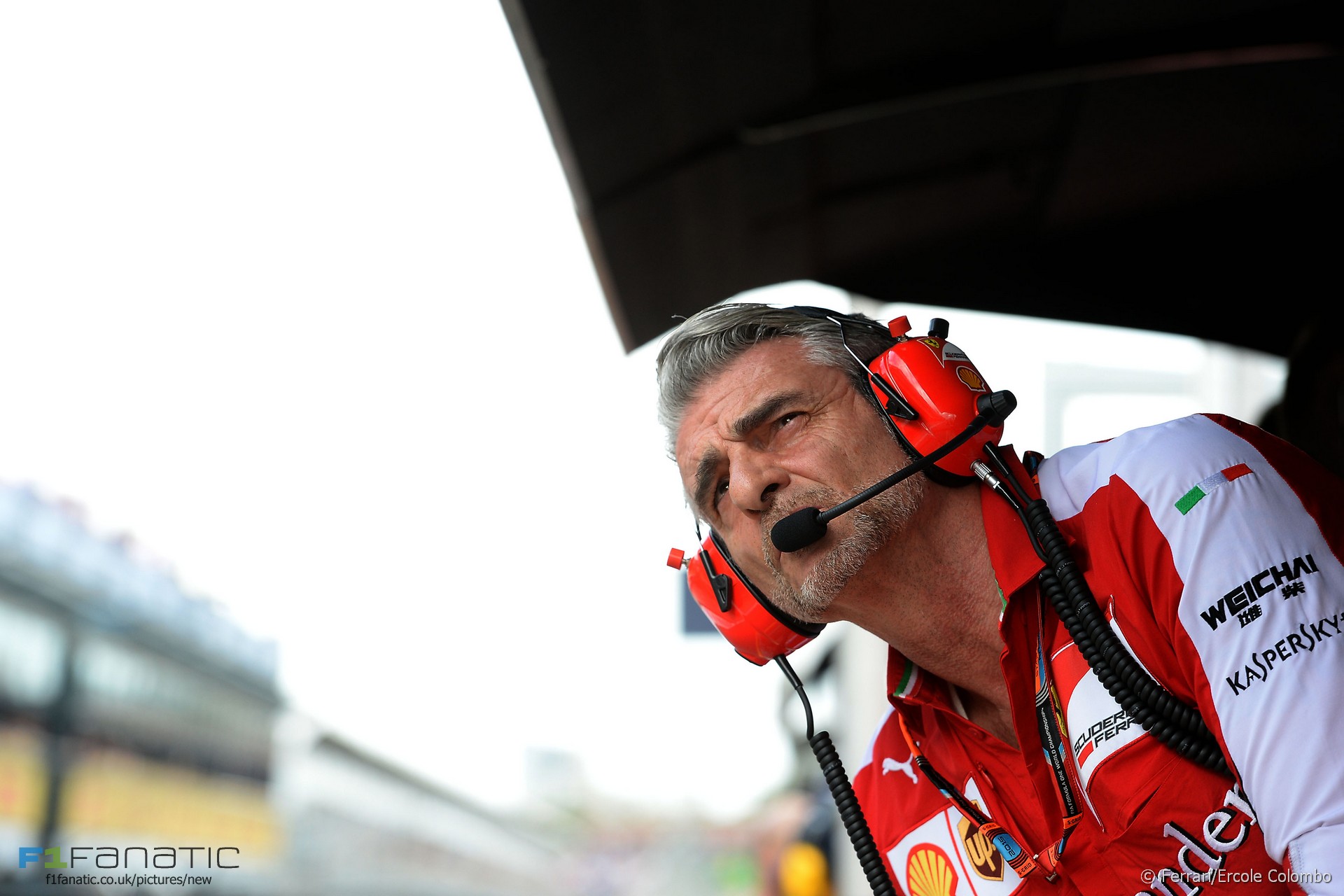 “There’s lots of places where we can control them,” McLaren boss Ron Dennis reflected at Suzuka. “But we can’t control them sat in a racing car.”

That’s why the drivers’ team radio communications give some of the most compelling insights into what’s really going on in Formula One. Dennis knew this only too well after the toe-curling experience of listening to star driver Fernando Alonso describe Honda’s power unit as a “GP2 engine” in front of the Japanese manufacturer’s top brass at their home race.

There were countless such memorable messages during 2015. Revealing, surprising or just plain amusing, here’s 75 of the best.

The first of many testy exchanges between Kimi Raikkonen and his engineer came as the Ferrari driver’s first race of the year was brought to an early end by a problem in the pits.

Certain types of assistance cannot be provided over the radio – as some drivers were told more frequently than others.

For the second year in a row, Sebastian Vettel was just hundredths of a second away from beating Lewis Hamilton to pole position.

Red Bull often found themselves having to orchestrate an exchange of positions between their drivers. On this occasion Daniil Kvyat confused Daniel Ricciardo by letting him through and then immediately re-passing.

Nico Rosberg felt Hamilton was trying to spoil his race.

Sergio Perez and Vettel tangled at turn one.

Formula One’s youngest driver had an unusual problem which said something about the performance of his engine.

Later in the season Force India pulled well clear of Sauber, but at this stage one of them was an irritation for Nico Hulkenberg.

Despite this last-lap scare Hamilton secured his third win in four races.

More frustrations for Raikkonen on two separate occasions during practice.

Disagreements about strategy were a frequent point of debate.

McLaren’s best chance of getting into Q3 all season was thwarted when Rosberg brought out the yellow flags, forcing Jenson Button to abandon his run.

Romain Grosjean fumed at being hit by Verstappen.

An excruciating slip-up for Hamilton in Monaco was caught on the radio. Formula One Management took the unprecedented step of publishing an extended excerpt of the discussion after the race, allowing us to hear exactly how a certain victory had been thrown away.

Hamilton briefly stopped at Portier corner on his way back to the pits, and a new radio message revealed recently showed Mercedes were concerned he wouldn’t come to the podium afterwards.

Red Bull orchestrated another exchange of positions in Monaco, this time to give Ricciardo the chance to attack Hamilton. It failed, so he was told to let Kvyat through again. Part of the exchange below was not originally broadcast during the race, and can be he heard on the official 2015 season review video:

Mercedes got another tyre call wrong at the very next day of running after their Monaco embarrassment. Both drivers were sent onto a very wet track in Canada on intermediate tyres, and Hamilton crashed as a result.

Kvyat had a case of too much information.

Button was vexed by a common team radio aggravation.

And Verstappen got a big surprise.

Struggling with an MGU-H problem, Vettel narrowly failed to make it into Q2.

Hamilton showed his appreciation for the team’s efforts after a trying few days.

Raikkonen spun at the old pits hairpin for the second year in a row and suspecpted there was a similar root cause.

Grosjean collided with the Manor of Will Stevens and didn’t immediately realise he had only himself to blame.

In Austria it was Raikkonen’s turn to drop out in Q1 on a damp but drying track.

While Mercedes took another one-two, a slow pit stop for Vettel put Felipe Massa on the podium.

The Williams pair made phenomenal starts at Silverstone and led the race – but Valtteri Bottas was anxious to demote Massa.

A superbly judged call for intermediate tyres secured the win for Hamilton.

McLaren’s diagnosis that Alonso’s power unit problem would not cause a problem soon proved false – he ended up pushing his car back to the pits. Things would get better for him, however.

Hamilton went off on the first lap and blamed his team mate for changing his line.

Red Bull pulled the switch again, and this time Kvyat was especially reluctant to play along.

Rosberg ran ahead of Hamilton for much of the race and was anxious to cover him off strategically.

Vettel dedicated his victory to Jules Bianchi, the former Ferrari development driver who died in the week before the race.

A familiar situation for Lotus.

On Saturday the other Lotus driver was livid after Raikkonen slowed in front of him.

Williams committed the unusual mistake of fitting two different types of tyre to one car – a violation of the rules.

Vettel ran a long stint on his tyres and was told they would last – but his right-rear blew up on the penultimate lap. Again, part of the message below was not previously broadcast:

Hamilton’s cruise to another win was interrupted when Mercedes learned he might be given a time penalty. He was urged to increase his pace, but they were reluctant to say why.

Button wasn’t sure about the reconfiguration of the Singapore track.

Ferrari knew they had an opportunity to win in Singapore but Red Bull were close and Vettel wasn’t leaving anything to chance. In Q2 he was unwilling to use any more life from the tyres he would start the race on.

Sure enough Ricciardo was pushing Vettel in the race when the Safety Car gave the Ferrari driver a break.

Meanwhile Hamilton’s only technical retirement of the year convenently coincided with a rare uncompetitive showing by Mercedes – though they believed they could have won.

Vettel was alarmed to discover someone had wandered onto the track during the race, which brought out another Safety Car.

Button was in a wry mood at McLaren.

Ricciardo had to settle for second, but he wasn’t going to let Vettel have the fastest lap.

After a superb effort in qualifying at Suzuka, Alonso was literally powerless to prevent his rivals passing him on the straight. He did not spare the blushes of the assembled Honda executives at their home event in a series of radio messages.

Alonso wasn’t the only driver frustrated by his engine – Red Bull’s struggle with Renault continued.

Button made sure the stewards were alert to Sainz’s transgression.

The gallows humour continued in the cockpit of the other McLaren.

Vettel had another fright from a person on the track.

Bottas passed Perez to take third on the penultiamte lap – only to be assaulted from behind by Raikkonen.

The race began on a wet track and Hamilton was eager to know where he could find an advantage.

Having been hit by Massa on the first lap, Alonso was in favour of parking late in the race. He said much the same during the season finale.

Hamilton won the race and with it clinched his third world championship.

Vettel was disappointed to learn his slim championship chances were at an end.

After tangling with Ricciardo on the first lap, Vettel returned to the pits with a puncture, using the run-off in several places. Alonso was not impressed.

It was a poor race for Vettel and he was disinclined to help the flying Mercedes.

When Mercedes decided to give both drivers an extra pit stop to look after their tyres, Hamilton spied an opportunity to stay ahead of his team mate. It was the first of three races in which Hamilton would try to use a different strategy to get in front of his team mate, but ultimately lost out.

Felipe Nasr had been frustrated by brake problems over and over during 2015, and made his unhappiness plain after retiring in Mexico with a potentially dangerous fault.

Kvyat narrowly missed out on a podium finish.

Once again Hamilton was stuck behind Rosberg and wanted Mercedes to change his tactics.

In Singapore Vettel celebrated his victory with a song, and during the second practice session in Abu Dhabi he sang the Italian version of Happy Birthday for his race engineer.

An increasingly frustrating season at Lotus hadtaken its toll on Grosjean.

Laughter on the radio at Toro Rosso as Sainz produced an especially good lap.

Alonso had first come across Stevens in Abu Dhabi 12 months earlier – once again he was unimpressed with his rival’s driving.

Alonso took issue with his penalty at the start of the final race.

Toro Rosso swapped their drivers to get Verstappen ahead, but he locked up soon afterwards and spoiled his tyres, leading them to reverse the call.

Did Hamilton think the same when Vettel held him up in Mexico?

Another attempted strategic gamble by Hamilton.

After his strategy gamble failed to pay off, Hamilton took the more contentious route of using a more powerful engine mode when he wasn’t supposed to.

Rosberg ended his season on a high but Mercedes rationed the celebratory doughnuts.