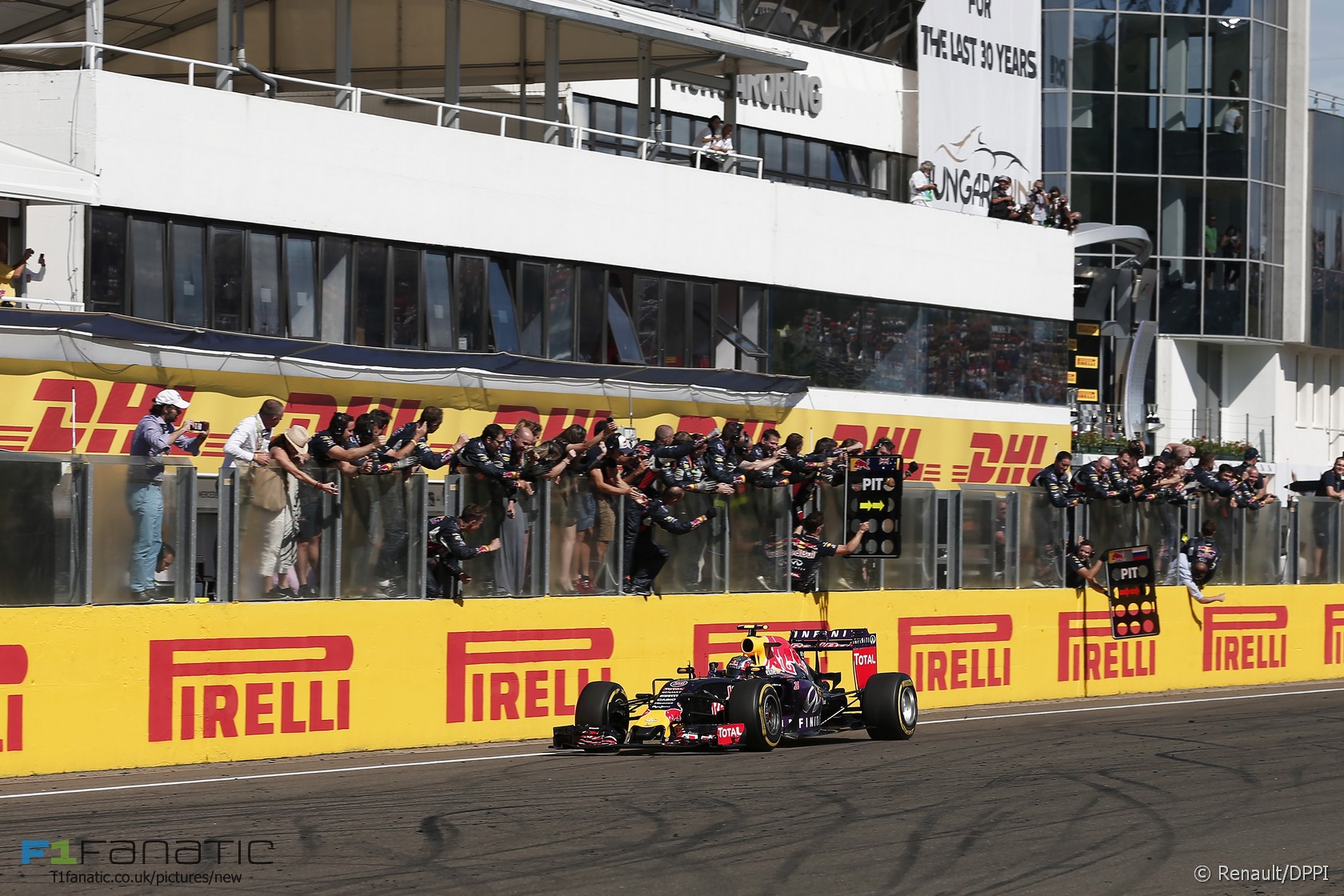 Daniil Kvyat’s first season with Red Bull was a curious one: he delivered solid results throughout but they didn’t always accurately reflect the quality of his driving. But a close look at his performance – rather than just the outcomes – makes it clear he was on an upward trend.

The RB11 was a tricky car at the beginning of the year and at times Kvyat coped with it better than Daniel Ricciardo. In Malaysia – his first start as the car broke down on the way to the grid in Australia – he led Ricciardo home despite tangling with Nico Hulkenberg. He also came home in front of his team mate in Monaco after getting a great start.

In between those races were a few disappointing outings including a Q1 elimination in Bahrain and a lacklustre weekend in Spain which culminated in him being passed by Carlos Sainz Jnr on the last lap. Silverstone should have been a high point, but he spun away a better result when the rain came.

The year offered few podium opportunities for the Red Bull drivers but Kvyat seized one of the best with second place in Hungary. However it was telling his race engineer called it “more than we deserved” after Kvyat had struggled earlier in the race and benefited late on from his team mate’s misfortune. That good fortune was conspicuously absent in Singapore, however, where both Safety Car periods fell against his favour – not that he had the pace to match Ricciardo. The pair contrasted sharply in the USA as well, where Kvyat looked ragged while battling the Mercedes and eventually crashed.

Spa was a better reflection of Kvyat’s steadily improving form as he climbed from twelfth on the grid to a solid fourth. In Mexico he deserved to finish in front of Ricciardo and with better luck might have been on the podium again. He produced an excellent qualifying performance in Brazil and delivered more points. That proved enough for him to end the year ahead of his team mate in the championship, but that gave a somehwat misleading impression of how much progress he had made.

Australia – Wasn’t able to accompany his team mate into Q3, and then failed to start the race at all following a gearbox problem on his first lap. A disappointing start to his first grand prix for Red Bull.

Malaysia – Fared slightly better with Red Bull’s brake problems and finished ahead of Ricciardo despite being tipped into a spin by Perez at one stage. He felt this was the most they could take from a race in which both Red Bulls finished behind their Toro Rosso siblings.

China – A weekend of problems for the Russian with brake issues on Friday, followed by a loss of power in qualifying that left him 12th on the grid. Lost places at the start as one of only two drivers to start on Medium tyres and unnecessarily cost his team mate and himself time by fighting before his Renault engine blew on lap 15, ending a forgettable weekend.

Bahrain – Failed to make it out of Q1 after spinning in final practice. He gained two places at the start but lost them on the next lap to Massa and Maldonado. However from then on his recovery drive picked up pace and he brought his car home in the points, re-passing the long-running Massa with three laps to go.

Spain – Also missed out on some running on Friday and Saturday, but managed to out-qualify Ricciardo for the first time this year. He made a very poor start, however, dropping back five places. Although he got back in the hunt for points he lost ninth to Sainz on the final lap after the pair tangled at turn one.

Monaco – Described himself as feeling comfortable at the wheel of the RB11 for a change and qualified fifth behind his team mate. That became fourth at turn one – a position he held at the end for his best F1 finish so far.

Canada – Out-qualified Ricciardo for the second time since they became team mates. Realistically he was never going to be able to keep Massa and Vettel behind in the race, but he had to keep his foot down to stay ahead of the recovering Grosjean.

Austria – Got into Q3 but also had to take a ten-place grid penalty, leaving him 15th on the grid. Collided with Perez at the start and had to replace his front wing, but other bodywork damage made the car “very tough” to drive, and he finished 12th.

Britain – A spin late in the race when the rain returned certainly cost him a better finish – at least fifth, probably fourth in front of the Williams drivers. Until that point he’d been on great form, qualifying seventh behind six faster cars and using an early pit stop to jump ahead of Hulkenberg.

Hungary – Out-paced Ricciardo in practice but was disappointed with his qualifying effort which left him seventh. After locking up heavily at the start of the race he was ordered to let Ricciardo through, which he was not happy about, but he caught a lucky break when he switched to soft tyres before the Safety Car came out. Although he had to run a long, 36-lap stint on them and picked up a ten-second penalty for going off the track while passing Hamilton, Kvyat steered clear of the unfolding chaos to grab a career-best second place.

Belgium – Was given a reprimand after cutting up Nasr in the pit lane during practice. Q2 was very tight and Kvyat missed the cut for the top ten by less than two-tenths of a second. But he made steady progress at the start and was third by lap three, then overhauled Massa. Like Ricciardo an early pit stop helped him continue his progress, and he was fifth at half-distance. After pitting for soft tyres he made his way back to the same position – taking Verstappen, Raikkonen, Massa and Perez – and gained another place when Vettel dropped out.

Italy – Like his team mate, Kvyat took a hatful of power unit change penalties as Red Bull had an eye on the opportunities offered by the next race at Singapore. He followed Ricciardo through the field but having fallen behind his team mate at the start he wasn’t able to get back ahead again, though he wasn’t far behind at the flag.

Singapore – Kept Ricciardo honest in practice and qualifying up until the crunch time. He nearly got past Raikkonen for third at the start, then had the misfortune to make both his pit stops moments before the two Safety Car periods. That left him sixth behind Bottas.

Japan – Although he was quickest in the rain on Friday Kvyat knew it was irrelevant. When the track dried out he struggled with a “messy” (his word) final practice and an even messier qualifying session – a straightforward mistake at turn ten had destructive consequences and left him starting from the pits. He struggled with brake temperatures and tyre life in his newly-built car in the race, and was frustrated by his overtake button not working.

Russia – Believed he could have improved and potentially joined his team mate in Q3 with the benefit of a second lap in Q2, but wasn’t able to fit one in. He made big gains at the start, jumping up to seventh, but was clearly slower than his team mate. Kvyat didn’t pit under the Safety Car and therefore had a more conventional race. Massa passed him easily but he inherited fifth place after Raikkonen was penalised.

United States – Lined up alongside Ricciardo and got ahead of him at the start, but had a rough ride from there on. Went off trying to pass Rosberg, dropped back much more quickly than Ricciardo as the moisture dissipated, and eventually spun into a wall.

Mexico – His engineer called his qualifying run a “solid effort”: he pipped his team mate by a thousandth of a second despite losing four-tenths in the final sector. Kvyat won further praise from Christian Horner after the chequered flag, having been on course for a podium until he was easily passed by Bottas in the first DRS zone.

Brazil – Described his Saturday effort as “probably one of my best qualifying laps this year” having struggled in the second sector on Friday. He was jumped by Hulkenberg at the first round of pit stops and thereafter had an uneventful run to seven.

Abu Dhabi – Was still figuring out his in qualifying after an electrical problem kept him out of final practice, but nonetheless made it into Q3. More problems surfaced in the race leaving him even more short of top-end performance than usual: Massa and Grosjean duly relegated him to tenth.

Let down by a slow start to the season but really pulled it back in the second half. He’s got the speed, although still prone to mistakes.
@JackySteeg

What’s your verdict on Daniil Kvyat’s 2015 season? Which drivers do you feel he performed better or worse than? Have your say in the comments.