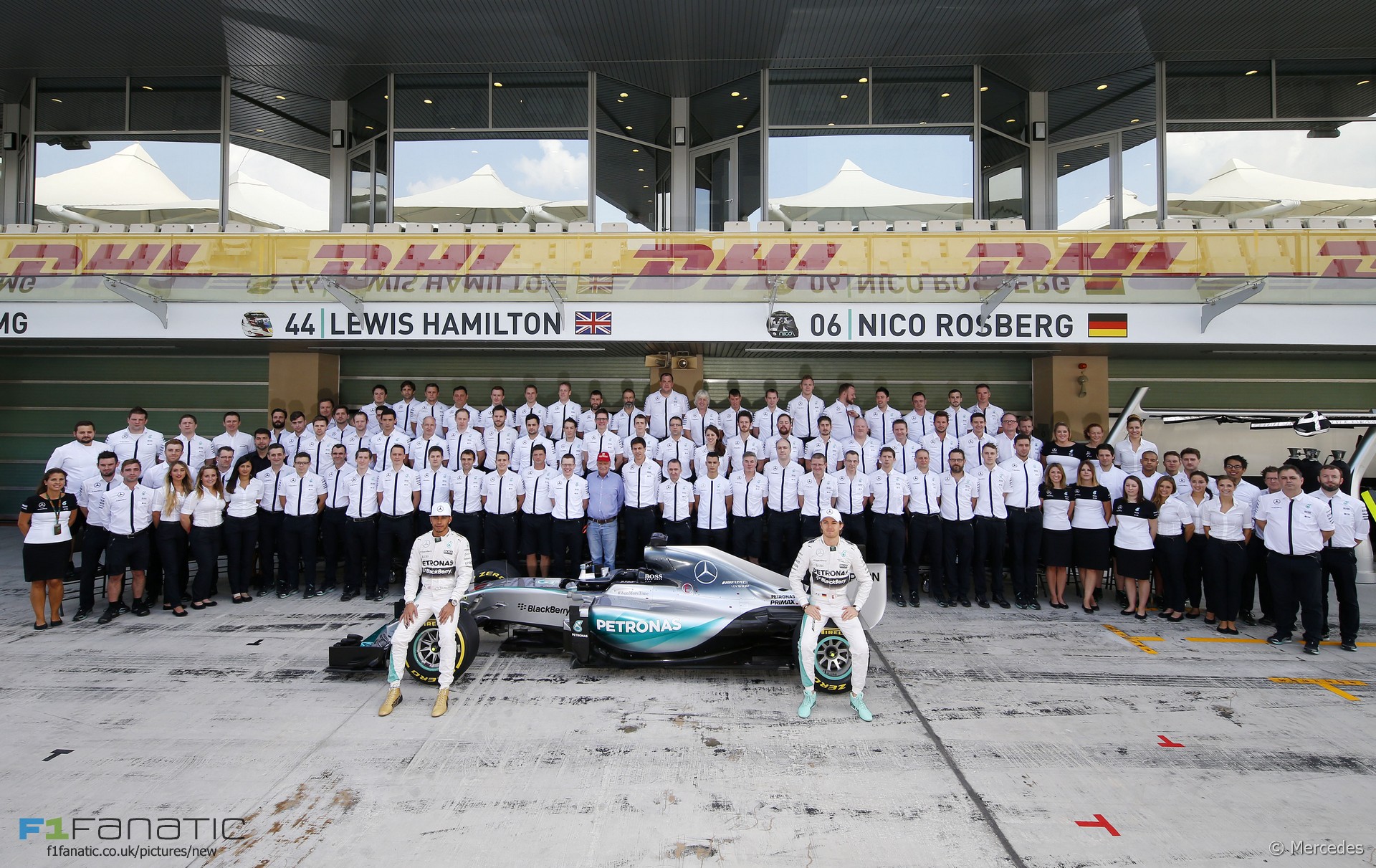 Following Mercedes’ domination of the 2014 championship, few would have expected them to pull even further ahead of the opposition in 2014. But the results indicate they did exactly that.

The Abu Dhabi Grand Prix was their 12 one-two finish this year, beating the record of 11 they set in 2014. They also managed one more podium than last year, breaking another record, and equalled the record of 16 wins in a season they set last year.

Mercedes therefore ended the season on 703 points – two more than last year over the same number of races, despite the abolition of the double points finale. The highest possible score available to them this year was 817 points, of which they scored 86% – another record.

The W06s locked out the front row of the grid for the 15th time this year, three more than last year and further new record for the books.

While Lewis Hamilton held sway for much of the year, after he clinched the title Nico Rosberg ran the table. He won the final three races in a row from pole position – something Hamilton didn’t manage all year long – and as the season closed took his sixth consecutive pole position. The all-time record stands at eight – Hamilton came within one of it earlier this year.

Despite Rosberg’s resurgence Hamilton beat him 11-7 in pole positions this year – an exact reversal of last year’s outcome.

Rosberg also took his 14th career win, giving him as many victories as world champions Jack Brabham, Emerson Fittipaldi and Graham Hill. Coincidentally, Rosberg equalled Hill’s wins tally on the 40th anniversary of his death in a plane crash.

He therefore denied his team mate in car number 44 from claiming his 44th win at a race where the 44th anniversary of the United Arab Emirates’ independence was being celebrated. However Hamilton did take the fastest lap on the 44th tour (and on the same lap Rosberg completed the middle sector in 44.444 seconds). That was Hamilton’s 28th fastest lap, giving him as many as Jim Clark.

Sebastian Vettel was eliminated in Q1 yet recovered in the race to finish one place behind his team mate – just as he did after his only other Q1 exit this year in Canada.

Kimi Raikkonen moved up to fourth place in the drivers’ championship at the last race of the season and avoided ending the year with less than half of his team mate’s points for the second season in the row. However his tally of 150 is 11 points less than Fernando Alonso managed with last year’s uncompetitive SF14-T.

Review the year in statistics here:

There’s more post-season stats coming in the 2015 F1 Season Review, but in the meantime if you’ve spotted any other interesting stats and facts from the Abu Dhabi Grand Prix do share them in the comments.