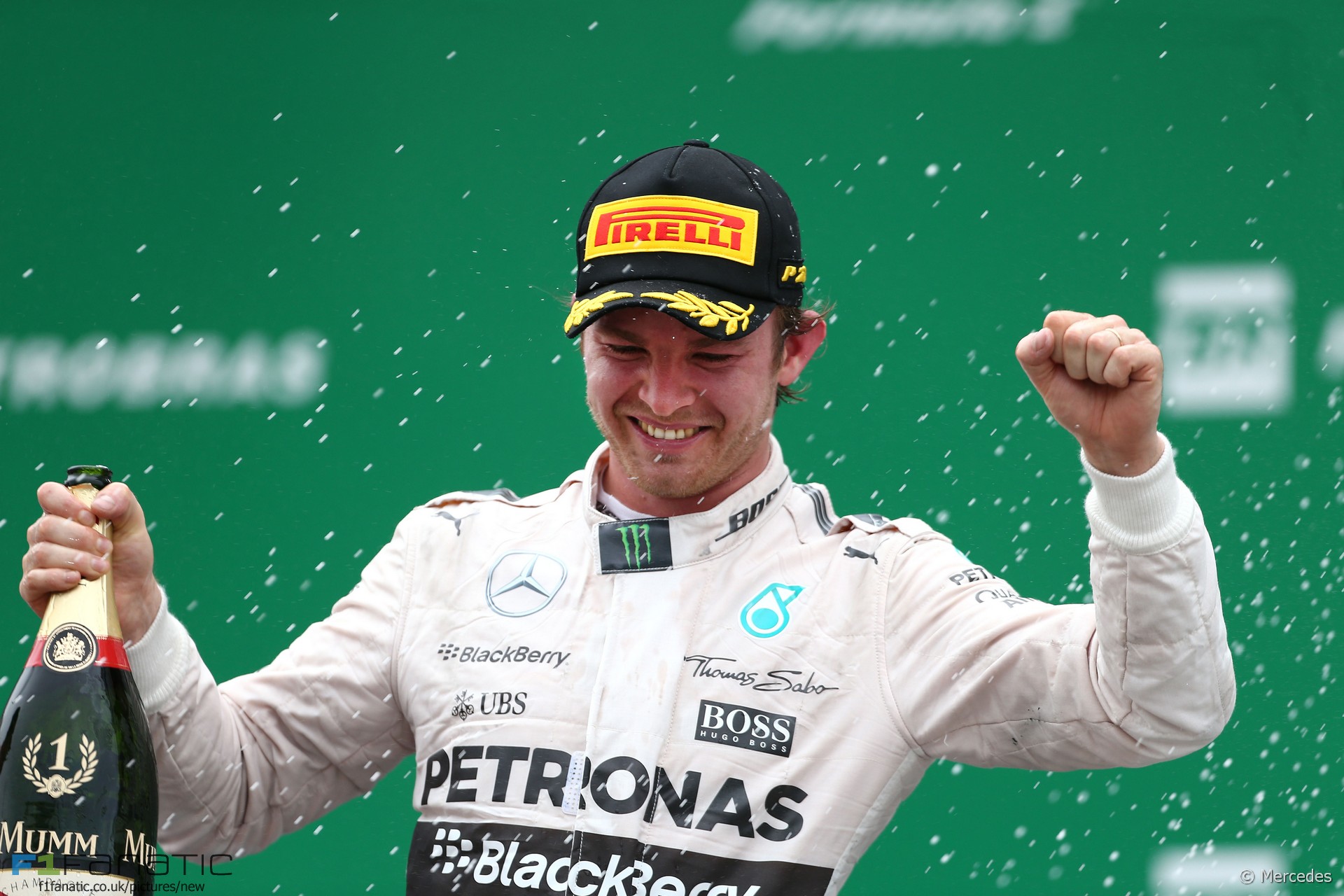 After the chequered flag fell on the penultimate round of the 2015 championship, Nico Rosberg had a straightforward explanation for why he had beaten his team mate for the second weekend in a row.

“I had the pace advantage over Lewis [Hamilton] today,” said Rosberg, “so of course he’s not going to come by me because in the end of the race I was six seconds in front.”

That wasn’t how his team mate saw things. “Contrary to what Nico was saying,” Hamilton began, “there was one point where I was all over him but I just couldn’t get by, I just couldn’t get close enough in that last second and I did have the fastest lap, so I obviously had the pace today.”

Hamilton felt the key to his defeat was that he had been stuck on the same strategy as his team mate. “Of course I was looking for whatever other opportunities there may be because on the track it was not looking great,” said the runner-up, who during the race had implored his team to come up with some way of getting his car into clear air.

None was found, and so for the ninth year in a row Hamilton left the homeland of his hero facing another 12-month wait for a chance to win the Brazilian Grand Prix.

For the fifth race in a row, Rosberg started from pole position. This inevitably prompted fresh questions as to how Hamilton has managed to go from taking seven consecutive poles to missing out on the top spot for half-a-dozen races.

“From Singapore onwards there’s been a change to the car,” he mused, not getting into specifics, “but whether or not that’s made a difference, I don’t know really.”

Rosberg still seems to have slightly more difficulty getting his Mercedes off the line than his team mate, but with Interlagos offering such a short run to turn one Hamilton couldn’t punish him for it. Rosberg held him wide on the entry to the corner before sweeping off into the lead.

During Q2 some 24 hours earlier Rosberg had been eager not to spend any longer on the soft tyres than he had to, knowing he would have to start the race on them. But it was only ever going to be a brief stint on the softs at the start of the race before the Mercedes pair switched to the more durable medium tyres.

As usual the lead Mercedes was first to pit: Rosberg came in on lap 13 and was stationary for 4.4 seconds, the team having to hold him in as Sebastian Vettel came past. Hamilton pitted on the next lap but wasn’t able to take full advantage, his Mercedes pulling away slightly slowly, losing 3.6 seconds.

After that Hamilton began to pay his team mate some serious attention. From laps 17 to 24 Hamilton was faster than Rosberg more often than not, even as the gap between them shrunk to less than half a second at one point.

Before the race had begun Hamilton had rejected the idea he might be able to pass Rosberg on the track during the race, but you couldn’t accuse him of not trying to get the job done. Twelve months earlier, in much hotter conditions, he had come close to jumping Rosberg by pitting later than his team mate, only to spin off. Now Hamilton believed he needed a more radical change of tack to get ahead.

He began lobbying his team on the radio to switch from a two-stop strategy to three. “Impossible to overtake,” he said. “Can you get me on a different strategy?” Race engineer Peter Bonnington was doubtful. “I think converting to Plan B would be a bad idea,” he replied. “That would drop us behind both Ferraris, they’re still doing 16.6s.”

Mercedes were willing to let Hamilton pursue Rosberg but were wary of doing anything which might jeopardise their positions at the front of the field. “Our policy is to let our drivers race and also to allow them to explore viable alternative strategies, as we have shown in the past,” said Lowe, “but we don’t let them pursue a bad alternative strategy at any cost.”

Those calculations changed when Sebastian Vettel , who was only six seconds behind Hamilton, made an early seconds pit stops. Team chief Maurizio Arrivabene said this was a “purely strategic” move to put pressure on Mercedes. Ferrari had nothing to fear from the cars behind them – Valtteri Bottas was steadily dropping away from fourth-placed Kimi Raikkonen – and as Vettel believed he could extract more pace from the soft tyre they believed a three-stop strategy had more to offer them.

The safest option for Mercedes was to mirror Vettel’s stop plan, albeit using the medium tyres which they were more comfortable on. This did nothing for Hamilton, however, as he remained on the same strategy as Rosberg.

The rights and wrongs of a team managing its strategies when its two drivers have a chance to win is something Mercedes have debated many times, according to Rosberg. He offered a justification for the team’s decision not to split their strategies.

“In advance you can only go by what you think the computer tells you, which strategy is best,” he said. “It wouldn’t really be fair for the guy who is running second to go for the other strategy and then for it to turn out that it was massively quicker in hindsight, after the race, and as a result he won the race just because of luck.”

New engine no help for Ricciardo

Ferrari, however, were content to run their drivers on significantly different strategies. Raikkonen stayed on a two-stopper and waved Vettel back into third place on lap 38. Raikkonen had been given a different engine after qualifying – an old unit, to avoid a penalty – and was being kept busy tweaking its performance. “Sorry for all the changes, we’re just trying to get this new engine set up,” said race engineer David Greenwood at one point.

At the end of lap one Bottas had leapt onto Raikkonen’s tail but there was to be no repeat of their Russia or Mexico confrontations – the Williams didn’t have the Ferrari’s pace. In the hands of Bottas, however, it had considerably more than the other car of Felipe Massa. That made Massa’s eventual disqualification due to a over-heated tyre all the more unfortunate – there is clearly no way it aided his car’s performance, as Massa noted afterwards.

Nico Hulkenberg, who is something of an Interlagos specialist, brought his car home in seventh place after pitting early to jump back in front of Daniil Kvyat. It was a badly-needed return to form for a driver who’s been put in the shade by his team mate recently, and it secured a best-ever championship position of fifth for Force India.

Kvyat did his best to regain his lost position but his Renault lacked the straight-line grunt to challenge the Force India on the straight. But at least he wasn’t running the new engine: Daniel Ricciardo was, and had to take a ten-place grid penalty for the privilege of using an engine which appeared even less powerful, leaving him 0.4kph down at the speed trap during qualifying. Making matters worse an early switch to the medium tyres backfired when the team discovered they couldn’t two-stop them, leaving him out of the points.

Sister team Toro Rosso also had the Renault blues. Carlos Sainz Jnr’s race never really started: an electrical problem halted him after he left the pits for his pre-race reconnaissance lap. Renault believed this was a recurrence of an electrical glitch which impaired his qualifying the day before. He started from the pit lane but the problem struck again just four corners into the first lap and he skidded to a halt with locked rear wheels.

Max Verstappen was at his improvisational best as he made up for his lack of straight-line speed, squeezing past Perez in the second part of the Senna S – the Force India driver wisely not turning in on his rival as Raikkonen had done to Bottas in Mexico. Romain Grosjean also took advantage of Perez’s delay to make up another place.

Grosjean went on to demote Verstappen and Massa’s penalty gave him eighth, a fair reward for his efforts on a tough weekend for the Lotus driver following the terrorist attack in his home country two days earlier. The other Lotus of Maldonado claimed the last point for tenth.

Between them came Max Verstappen, who fumed at his car’s lack of grunt during the race. “On the straights we were slow and it’s very difficult to defend position with a Lotus or a Force India unfortunately,” he said afterwards, “but to add another point is always good. I enjoyed it out there this afternoon – I managed to do some good overtakes, especially at turn one.”

Felipe Nasr took 13th in an uneventful first race at home, while team mate Marcus Ericsson’s day was ruined when he was hit by Maldonado – an incident for which the Lotus driver received his eight penalty of the year.

Without Ericsson’s problem, the McLaren pair would have had just the two Manors behind them at the chequered flag. Fernando Alonso, who during the race was clearly displeased by his team’s strategic decisions, was also compromised by his Honda’s power delivery and, like Raikkonen, the lack of time to set up his new unit.

“The car was not working 100% at the beginning of the race,” he explained. “It sometimes felt strange to drive, with different power in different gears, so I was having to try to avoid the odd gear from time to time. I think the reason for that was that after qualifying we fitted a brand-new engine and we didn’t have any laps in which to set it up.

While the team mates at the front of the field held their positions from start to end, Will Stevens perhaps gave the lie to Hamilton’s insistence that it wasn’t possible to pass a similar car around the track. Having been out-qualified by Alexander Rossi, Stevens passed his team mate thanks to his more race-focused set-up.

The penultimate race of the season unfolded as much of those before it had, with the battle for victory conducted exclusively by the two Mercedes drivers.

But Sebastian Vettel took heart from being able to get close enough to them to provoke a response from the pit wall.

“We were close as we had never been before,” said Vettel afterwards, “which is a massive achievement considering that Mercedes was pushing all the way, as they had nothing to lose.”

The year’s championship is one race away from being history. After that, it’s not just Vettel who will be hoping Mercedes have some closer competition in 2016.