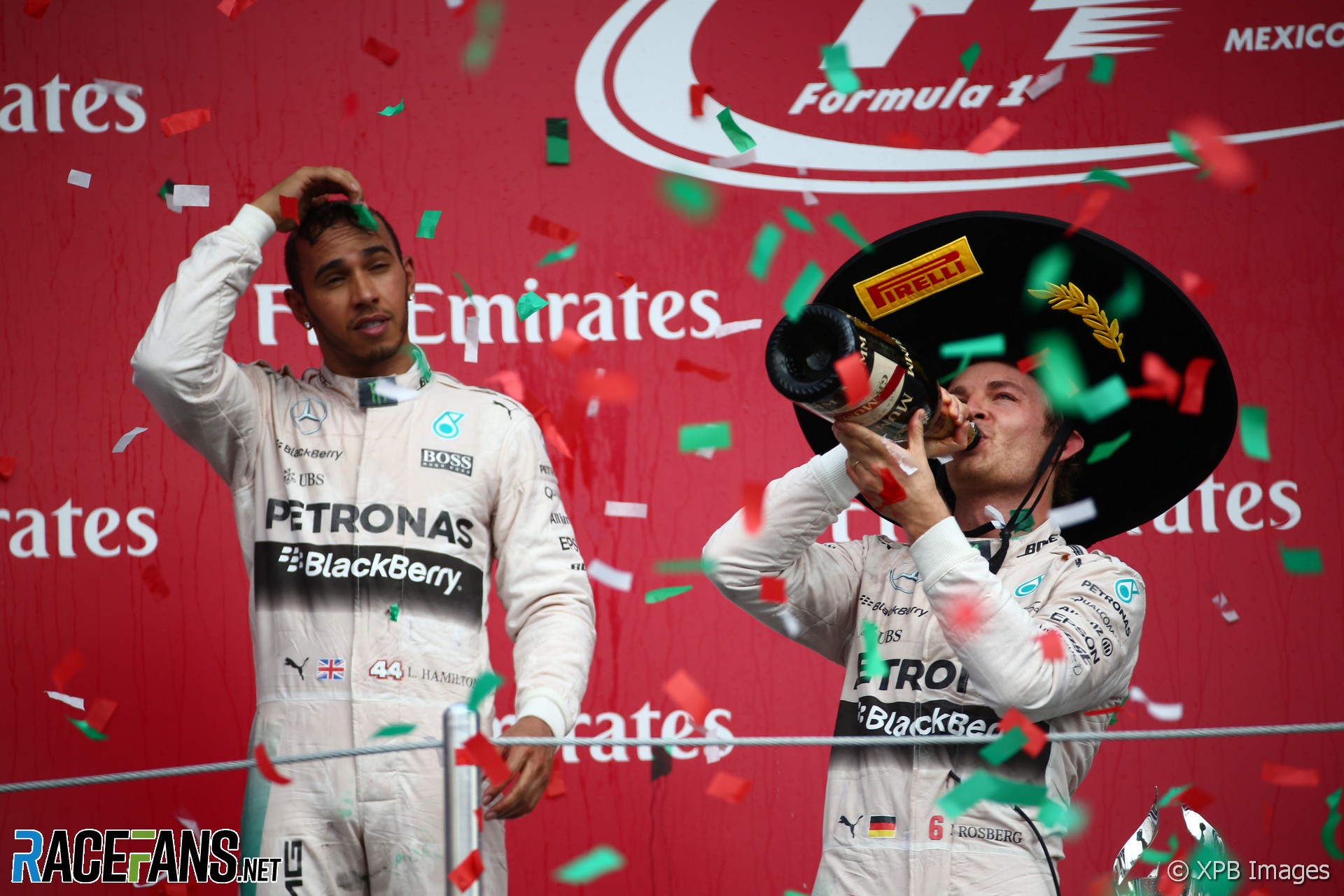 Was the most significant event of the United States Grand Prix really two drivers chucking a hat at each other?

For anyone labouring under the misconception that this had been the source of Nico Rosberg’s grief in Austin, the Mexican Grand Prix provided a timely reminder that the business of winning matters more to sportsmen than ‘the show’.

Stung by his third consecutive pole-to-defeat, irked by the turn one clash with his team mate, deflated by the early conclusion to the championship and, above all, humiliated that it was his own mistake that ultimately cost him victory, Rosberg set out for revenge as F1 returned to Mexico.

A capacity crowd welcomed F1 back to Mexico for the first time in over two decades at a venue which had changed so much since F1’s last visit the resemblance had almost vanished. The track’s owners, Corporacion Interamericana de Entretenimiento, saw fit to build a stadium on the inside of its signature Peraltada corner which as soon as 2002 had made it impossible for high-performance racing cars to negotiate the corner safely – even those designed to race on ovals.

F1’s return led to the eradication of most of the remaining quick corners, save for a perfunctory sequence of semi-quick bends in the middle of lap where the tortuous and challenging Esses had one been.

But while the course had been sapped of much of its driving challenge, the spectators were treated to one of the best vantage points in motor racing. At the Foro Sol stadium the cars filed through the grandstands Singapore-style, and in an inspired move the organisers also arranged for the podium ceremony to take place at this part of the track.

Rosberg resists Hamilton at the start

Late-running construction work meant the track had been slippery even by the standards of a newly-laid course during practice, and introduced a little more guesswork than usual into teams’ pre-race preparations. Cooling was discovered to be a greater priority than expected – notably for Rosberg in the first practice session, when his rear brakes began to barbecue themselves.

From then on Rosberg held sway over his team mate: a whisker faster down the huge, 1.2-kilometre main straight which more than made up for a trade-off in performance in the slow final sector of the lap where Lewis Hamilton was predictably strong.

Pre-race predictions of carnage at the start proved unfounded. Rosberg’s starts have been found wanting since the mid-season rules tweak, and though this one didn’t look perfect it was sufficient to keep Hamilton behind, even after the 900-metre sprint to turn one.

The widepread predictions of first corner carnage were not realised. The only victim was Sebastian Vettel, whose hope he would be able to take on the Mercedes was shattered when he was passed by Daniil Kvyat and then given a puncture by the other Red Bull.

Vettel scampered back to the pits, earning disapproval from Fernando Alonso as he did. “Vettel is cutting all over the circuit,2 he complained on the radio. “Very dangerous manoeuvre.” The McLaren driver was heading into the pits to retire and briefly delayed Vettel as he did.

Once he’d returned to the track with a fresh set of tyre, Vettel immediately began lapping close to the Mercedes drivers’ lap times. His confidence in Ferrari’s pace had been well-placed, and his early setback prevented a closer race from developing.

By lap eight Mercedes had five seconds in hand over their closest challenge, Kvyat, and with the field bunched up closely behind them others soon took the opportunity to pit. Williams, who had the trump card of the best straight line speed, brought both of their drivers in by lap ten. Their pace having switched to the harder medium compound tyre was not sufficient to get them in front of Kvyat, but Daniel Ricciardo was jumped by both of them.

Kvyat held on to third place partly because Valtteri Bottas came out of the pits behind Kimi Raikkonen, setting up a fresh contest between the pair who had clashed in Russia.

On that occasion it had been to the detriment of Bottas. This time it was Raikkonen, who had risen 12 places from 19th on the grid, who lost out. Bottas nosed ahead on the outside as they entered turn four, Raikkonen edged him wide but Bottas was still on the track and still alongside the Ferrari. Regardless, Raikkonen took his normal line into turn five and contact was inevitably made.

Raikkonen’s right-rear suspension failed immediately while Bottas pressed on. The stewards declined to blame either driver: something past experience has shown tends to happen when the perpetrator retires and the innocent party continues.

Hamilton had drawn slightly closer to Rosberg as their first pit stop loomed, then stayed out two laps later than his team mate before being told to pit. “Nico faster on the [medium],” his race engineer pointed out somewhat obviously, as Rosberg’s tyres were new. The real question was whether making two pit stops or one was the quickest way to the end of the race.

With track temperatures having risen 12C compared to the previous day’s running, the safest way to a one-two for Mercedes was undoubtedly to pit twice. Hamilton, however, fancied trying to jump Rosberg by making a single stop.

Hamilton did 28 laps on his soft tyres at the start of the race, a set which had also done four laps in qualifying for a total of 32. A one-stop strategy would mean running a fresh set of mediums just 11 laps further – less if Hamilton had extended his first stint, and as his last lap before pitting had been within two-tenths of Rosberg’s pace at the end of his first stint that seems to have been reasonable.

That explains why when Hamilton was told to mimic Rosberg’s second pit stop after just 20 laps on his medium tyres, he was reluctant. “These tyres are still good,” he protested.

After a bit of to-ing and fro-ing his engineer Peter Bonnington laid down the law: “For a long run on this set we will be down to zero if not worse, so this is boxing end of this lap instruction.”

“I think that’s the wrong call,” Hamilton answered, then diplomatically added: “But I’m coming in.” Asked afterwards whether the call had been correct, Hamilton talked about five different things instead.

Shortly after Hamilton pitted, Vettel’s ragged race came to an end. He had already spun once, pushing too hard in the grip-less middle sector, and groused when instructed to let Hamilton by to lap him. On lap 51 the car got away from him for good and planted itself in a TecPro barrier. “I’m not proud of that,” he admitted afterwards.

In the subsequent, lengthy Safety Car period Felipe Nasr’s brakes cooked themselves and he joined Vettel as the race’s fourth and final retirement.

Hamilton vainly gave chase of Rosbreg, almost drawing within DRS range only to lose time in the final sector. “So hard to follow here,” he reported.

Despite taking a fresh set of soft tyres Kvyat swiftly lost his podium position. “We didn’t have enough pace on the straight and Williams went full bananas, so Bottas passed me quite easily”. He came home fourth ahead of Ricciardo, who had demoted Massa with a late-braking move at turn one.

The two Force Indias were next, Nico Hulkenberg ahead of home hero Sergio Perez, who had won the crowd’s applause in the stadium by passing the two Toro Rossos there.

Perez’s race also demonstrated what might have happened had Hamilton stayed out. He was 16.5s behind his team mate Nico Hulkenberg when the Safety Car came out and Force India believed Hulkenberg would drop behind him when they pitted him. But Force India were surprised to discover Hulkenberg stayed ahead.

Hamilton was 18.6s ahead of Rosberg before he pitted, so had he stayed out just two laps longer he might also have been able to make a pit stop under the Safety Car and come out ahead of his team mate. Alternatively, even if he had decided not to pit at all he might still have won. Perez was able to nurse his tyres to the end without losing a place after the Safety Car came in.

But would Hamilton have done differently if the championship had still been on the line? Or, following the trauma of Monaco, did he not want to risk getting the call wrong?

Either way, it secured a badly-needed win for his team mate.

51 comments on “Rosberg gets his revenge as Hamilton holds back”