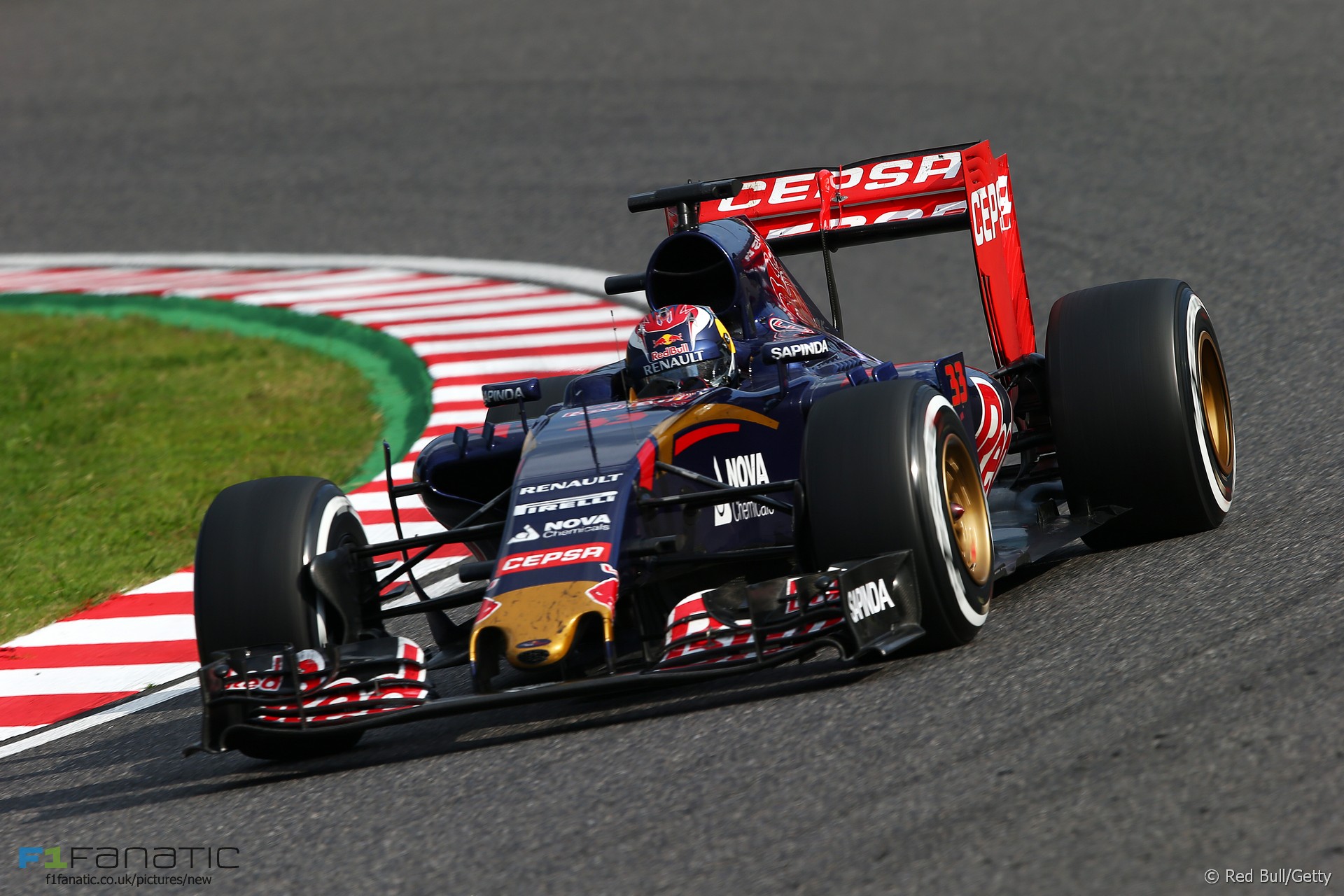 Max Verstappen was the stand-out driver over the last two race weekends according to F1 Fanatic readers.

The Toro Rosso driver, who turned 18 last week, topped the Japanese Grand Prix Driver of the Weekend poll and was runner-up in the Singapore poll too.

However Sebastian Vettel was comfortably voted the Driver of the Weekend after his Singapore victory.

Vettel didn’t get off to the best of starts in Singapore. He was outpaced by team mate Raikkonen throughout Friday’s two practice sessions, yet as the weekend unfolded – and it became clear Mercedes were severely lacking pace – he became a firm favourite.

Third practice went his way by nearly half a second, and advantage that never looked like being troubled throughout qualifying, as Vettel eased to his first ever Ferrari pole position. The race pace from Red Bull looked strong during practice, and Ricciardo posed a threat, but two Safety Car periods towards the end of the stints – when Vettel looked most vulnerable – protected him, and ensured him his third win of the season.

Vettel’s 56.7% of the vote was nearly 30% more than any other driver received. Verstappen’s recovery run from a lap down to into the points impressed many – as did his disregard for Toro Rosso’s team orders – and he took the second-largest share of the votes. The two Mercedes drivers picked up just ten votes between them after one of the team’s worst performances since 2013.

Simply for having the courage to go for the better time in Q3 even with a guaranteed first place and smashing others comprehensively and for leading the race from start to finish.

The first lap was a stunner as well, gaining three seconds and effectively killing off any chance that Ricciardo had when DRS was enabled. So was the sudden dip (two seconds) before the pit window.

All race long, he was driving a controlled race and was at times a second faster than the second Ferrari. That is domination in any dictionary. If Ferrari can keep up this pace for the rest of the year and if Mercedes suffer any reliability problems, the drivers’ championship is still game on.

If ever a designer wanted motivation to build a better car for the driver, he must see his pole lap. Was astounded and I still am.
@evered7

He was not only fast but planned the race brilliantly.

In the first stint, he was aware of the threat from Ricciardo’s Red Bull with its better chassis and tyre saving setup. So he sprinted away and then held station, ready to adjust for whichever strategy Red Bull used. After the first Safety Car intervention and enforced tyre change, he used a different tactic to beep Ricciardo at bay, this time saving his tyres for a while before sprinting again.

In the final stint he steadily pulled away from Ricciardo as the flag approached, clearly not pushing the limit on the super-soft tyres.
@loup-garou

Classic Vettel. The pole lap was incredible, and the race was controlled from start to finish.
@ferrox-glideh

It was a closely contested poll for Driver of the Weekend at Suzuka, and with just 29.4% of the vote Verstappen had the lowest winning total since Nico Hulkenberg in the 2012 Brazilian Grand Prix.

It now seems commonplace in F1 that when the rain falls, the Toro Rosso drivers take to the track, so it was no surprise to see Verstappen and Sainz among those who topped the lap counts on the rain-hit Friday in Japan. Top eight positions in all three practice sessions seemed to be setting Verstappen up for a strong qualifying result, but an electrical failure in Q2 put paid to those hopes. To compound his misery, the stewards hit him with a three-place grid penalty for parking his car on the racing line.

But from 17th on the grid he rose to 13th by the end of lap four. An early pit stop gained him more ground, as did some impressive overtaking, including an ambitious – albeit failed – move around the outside of 130R. To complete the job he nailed Sainz at the chicane to take ninth.

Several other drivers picked up a large share of the votes in Japan. Hamilton’s flawless race win was nearly enough for him to win – he had just 5% less of the vote than Verstappen – while Hulkenberg, Alonso and Vettel also won much praise.

Did well in qualifying but suffered from an engine problem. After a penalty (which many think was a bit harsh) he started from 17th place. His team mate started tenth.

In the first few laps he overtook four cars. Then he got stuck behind other cars which are faster on the straights. He changed strategy and pitted early. Despite being down on engine power, he makes a number of great overtakes (e.g., on Alonso and Button – two world champions who are difficult to overtake if your car is even slower on the straight than the Hondas).

Once he was free, he drove extremely fast. At that point only the Mercedes and Ferrari drivers drive faster lap times. Eventually Verstappen’s fastest time is 0.449s faster than Sainz’s and only 0.331s slower than Vettel’s! He caught up with his team mate and overtook him. In the remaining laps, he drove 15 seconds away despite being on tyres that degrade faster.
Kimenai

For me it was Max Verstappen for his great recovery drive from 17th to ninth following yet another qualifying impact by car failure.

Due to lack of Renault engine power overtake was certainly not easy, several times the car ahead pulled away despite Max having DRS.

They changed his strategy giving him clean air and immediately Max delivered quick lap after quick lap and in his final stint he made his medium tyre last longer/better than those around him on the hard tyre and he finished 15 seconds ahead of his team mate who started seven places ahead and had more clean air for most of the race.
Jelle van der Meer

He drove a great race and provided a few excellent overtakes without making mistakes. He’s already driving well beyond his years and I think he’ll be pushed into a top team early so that team can tie him up to a long term contract.

It will be interesting to see what happens to him if Red Bull leave F1 as it’s looking like Manor will be to Mercedes and Hass will be to Ferrari what Toro Rosso is to Red Bull: A training ground for young promising drivers. Driving for one of those teams would be a step backwards so would he be pushed into a leading team?
@Alilane4

2015 Driver of the Weekend winners

40 comments on “Verstappen earns plaudits for Japan and Singapore performances”