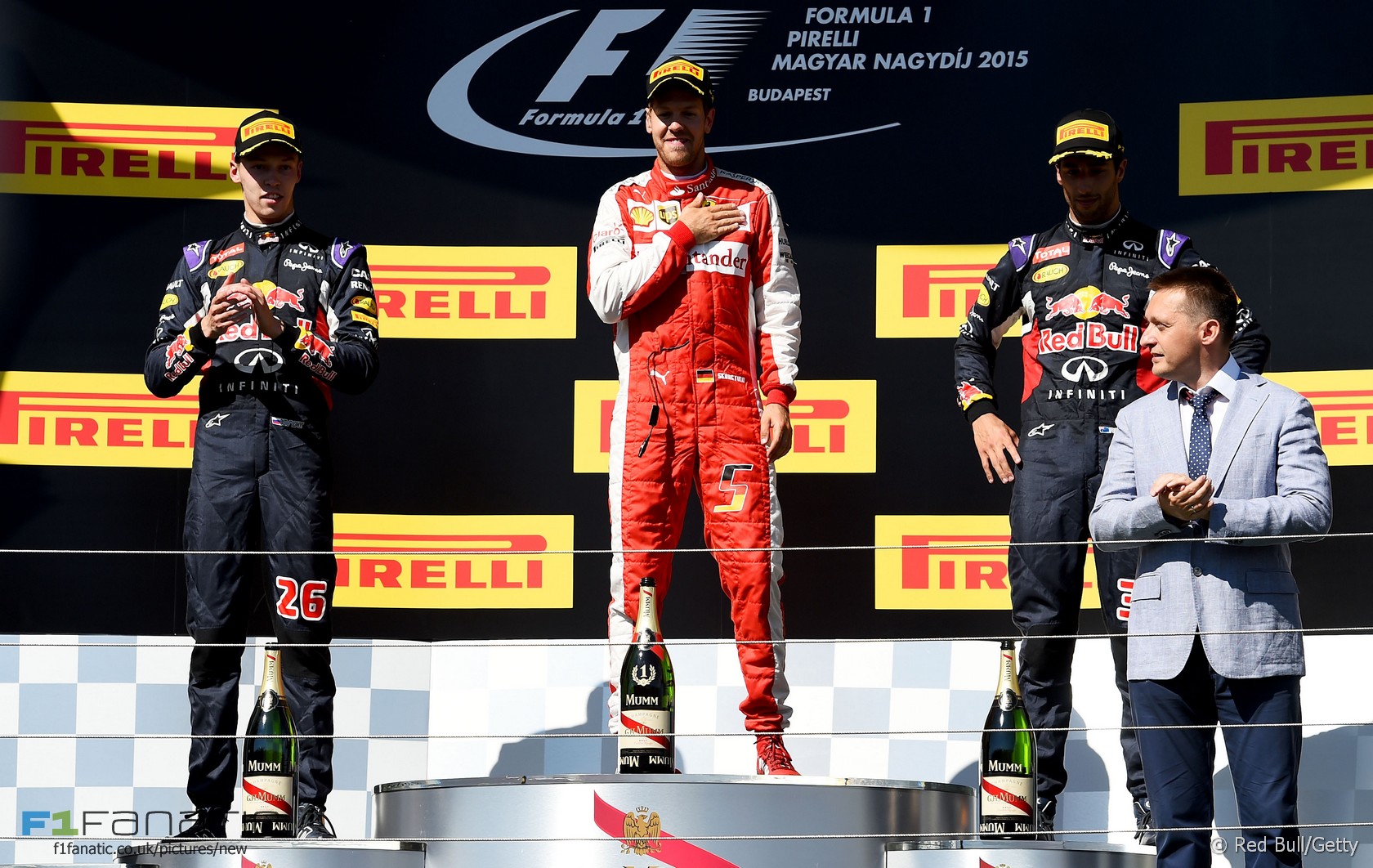 The pair occupy third place on the all-time list of F1 race winners, behind Michael Schumacher on 91 and Alain Prost on 51.

Here’s how their career stats compare:

Vettel’s surprise win put the brakes on several of Mercedes’ dominant streaks. With neither W06 finishing on the podium, they failed to take a record-breaking tenth double podium finish in a row. They also failed to extend their run of 28 consecutive podium finishes which is the second-longest of all time, albeit far behind Ferrari’s record of 53 (though Mercedes is the only team to have managed half as many).

In fact, this was the first race since the 2013 Brazilian Grand Prix that the podium featured no Mercedes-powered drivers. Since the beginning of last year, the Hungaroring is the only circuit where Mercedes has failed to get a car home in first or second place.

Lewis Hamilton’s streak of podium finishes came to an end. He managed the second-longest of all time: 16 podiums in a row, three fewer than the record held by Schumacher. He also failed to add to the record for leading 18 grands prix in a row which he established at the British Grand Prix.

However Hamilton did score his fifth pole position in a row which is a new personal best. No one in the field today has managed to take six or more: Senna, Schumacher, Alain Prost, Niki Lauda, Nigel Mansell and Mika Hakkinen are the only drivers to have done so.

Despite a dreadful race Hamilton managed to extend his points lead over Nico Rosberg to 21. With the first ten races of the season complete Hamilton has 26 points more than he had after the same number of races last year, Rosberg nine less.

Daniil Kvyat scored his first podium finish and the best-ever result for a Russian driver – going one better than Vitaly Petrov managed in the 2011 Australian Grand Prix. Kvyat is the second-youngest driver to stand on an F1 podium – just 18 days older than Vettel was when he won the 2008 Italian Grand Prix. Red Bull ended an 11-race streak without a podium finish, their longest in six years.

The top four drivers in the race all drove for Toro Rosso at some stage in their careers. Among those drivers was Max Verstappen, who scored his best result with fourth place, and more than doubled his career points tally. Appropriately, he did so at the only track where his father stood on an F1 podium. Fabio Leimer made his first appearance at a grand prix weekend, which means all ten GP2 champions have now run in an official F1 session. Giorgio Pantano is the only one whose F1 participations came before he took the title.

There were no Force Indias in the second practice session as the team were investigating the cause of a failure on Sergio Perez’s car. Three years ago the team sat out second practice in Bahrain for safety concerns of a very different nature. In another parallel with the 2012 season, Felipe Massa caused an aborted start after failing to line up properly on the grid, as Schumacher did in that year’s Hungarian Grand Prix.

Pastor Maldonado attracted attention for the wrong reasons by falling foul of the stewards on three separate occasions during the race. All three infringements were for different reasons (contrary to some reports, he did not incur a penalty for speeding in the pits while serving a penalty for the same infraction). Maldonado has personally incurred seven penalties so far this year – three more than any other driver.