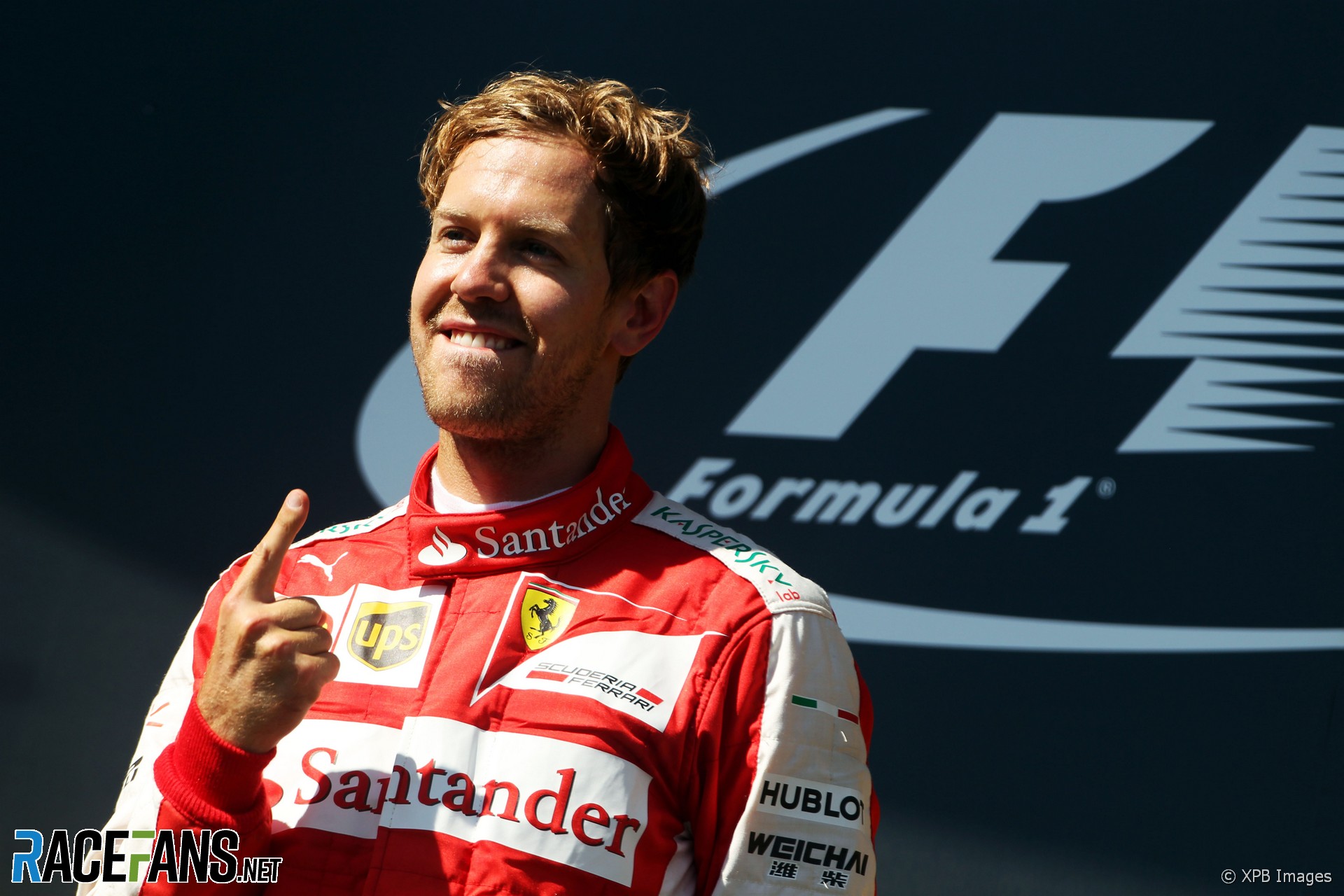 In times of tragedy, some draw comfort from the belief that the departed never really leave us.

If that is so, then from his celestial vantage point Jules Bianchi must have reflected that the Hungarian Grand Prix was a race he really could have done something with.

It was a day for the underdogs and the unfancied, not unlike that race in Monaco last year where he and Marussia achieved the improbable. And in a fitting result, it was won by the team Bianchi was destined to drive for one day, had cruel fortune not taken him away.

Before the grand prix Bianchi’s former rivals, joined by his family, assembled in a circle in a minute of silent respect for him. But when the time came to race, they delivered one of most intense grands prix we have seen for some time.

Ferrari to the fore For the second race in a row Mercedes were swamped at the start. Starting from the clean side of the grid Sebastian Vettel drew alongside Lewis Hamilton then eased him away from the racing line, braked deep and late for the first corner and swept around the silver cars into the lead.

With Nico Rosberg on his right and the Ferraris on his left, Hamilton braked cautiously for the first corner and fell to fourth place. And as both Mercedes drivers scrabbled for grip on the outside of turn two, Kimi Raikkonen followed his team mate through to cement Ferrari’s grip on the top two places.

Just when things looked like they couldn’t get worse for Hamilton, they did. Approaching the turn six chicane for the first time, and perhaps distracted by his team mate covering the inside line, Hamilton snatched a brake, dropped a wheel onto the grass and bumped across the gravel trap and rejoined the queue of cars in tenth place. His hopes of a record-breaking fifth Hungarian Grand Prix had been shot to pieces within a minute of the lights going out.

At the end of lap one Vettel had a second in hand over his team mate and Rosberg was already three seconds behind. Valtteri Bottas had moved up to fourth place and Nico Hulkenberg joined him in the top five by slipstreaming past Daniil Kvyat’s Red Bull, which was sparking like a fairground dodgem over the bumps at turn one.

Kvyat had locked his tyres heavily the first time he touched the brakes after the start. Now he was sandwiched between the Force India and Daniel Ricciardo, who had lost ground on lap one after making contact with Bottas. Red Bull swiftly took the decision to change the running order of their drivers. Kvyat took quite a bit of cajoling on the radio, cursing in frustration after being repeatedly told to “let Ricciardo through”.

Kvyat pitted early on lap 13 to replace his flat-spotted tyres. This promoted Hamilton to seventh, having passed Felipe Massa and Sergio Perez with the help of DRS. He demoted Nico Hulkenberg next, and following his lap 19 pit stop for another set of soft tyres the championship leader had a firm hold on fifth place.

Up ahead the usual Mercedes pace was not in evidence as Rosberg dropped back from the Ferraris. He pitted on the lap after Hamilton, prior to which he had been almost ten seconds behind the race leader.

Mercedes opted to switch Rosberg onto the harder tyres for his middle stint, planning to get him back on the softs at the end of the race. Ferrari stuck to the standard strategy, putting both their cars on softs for the next stint, which allowed them to shore up their advantage.

However it threatened to leave them vulnerable in the event of a late Safety Car period, which is exactly what happened. Force India had already suffered one alarming car failure on Friday when a suspension breakage on Perez’s car pitched him into the barriers and then up onto his roll hoop. On lap 42, five laps after switching to medium tyres for his final stint, it was Nico Hulkenberg’s turn to get an unwelcome surprise.

Approaching the braking zone for turn one, Hulkenberg’s front wing dropped from its mountings. Fortunately it destroyed itself so comprehensively that Hulkenberg’s front wheels, having initially been lifted into the air, returned to the ground, allowing him to shed vital speed before spearing into two rows of tyres. But it was an alarming incident, and the second front wing failure of the weekend, Raikkonen’s having done the same at turn 12 on Friday.

The Virtual Safety Car was deployed initially and Mercedes responded immediately, Rosberg hitting his marks before Hulkenberg had even had chance to climb from his car. But the speed with which the decision to pit was made gave them little chance to reconsider their default tyre choice of a further set of medium tyres.

After Rosberg rejoined the track, the VSC was replaced with a real Safety Car, allowing the field to run through the pits and avoid the debris-strewn front stretch. This also erased Rosberg’s 22 second deficit to Vettel, and Mercedes rued the missed chance to put him on softs to attack them for the win.

However one of the Ferraris was already vulnerable. An MGU-K fault on Raikkonen’s car slowed him from lap 41, and the appearance of the Safety Car destroyed his valuable margin over the rest of the top ten. Rosberg passed him with ease when the race resumed, and sooner afterwards Raikkonen headed to the pits for the first of several unsuccessful attempts to fix the problem. The restart brought an onslaught of breathless action which looked more like something from an IndyCar race. Hamilton had Rosberg in his sights but the pair were destined not to cross paths. While Rosberg set about passing Raikkonen, Hamilton came under attack from a soft-tyres Ricciardo.

At turn one Ricciardo ducked to the outside but Hamilton out-braked himself and thumped into the side of the Red Bull. This put Hamilton’s recovery effort in serious peril – his front wing was badly damaged and the stewards would shortly hand down a drive-through penalty for avoidable contact.

Climbing the hill out of turn three Kvyat accelerated past Bottas but ran wide in turn four, where Hamilton was also exploring the run-off area. As they rejoined Kvyat nipped past the Mercedes driver – earning himself a ten-second penalty. While they went side-by-side into turn five Bottas tried to line the pair of them up for a run at the exit, only to be tagged by Max Verstappen’s Toro Rosso.

Bottas out-braked Hamilton at the chicane but the Williams driver’s right-rear tyre was exhaling its last, and two turns later Hamilton was back through. Both would soon require attention in the pits, however.

By the time Hamilton had taken a new front wing and served his penalty, car number 44 was out of the points and Rosberg’s second-placed Mercedes was poised to take the championship lead. But now it was Rosberg’s turn to hit Ricciardo-shaped trouble.

Although his Adrian Newey-designed RB11 now carried some Lewis Hamilton-styled aerodynamic modifications, Ricciardo hunted down the other Mercedes. With five laps to go he had second place in his sights.

Asking slightly too much of the extra grip afford by his soft tyres, Ricciardo came steaming down the inside of Rosberg, his front-right tyre smoking, and though he made it around the corner Rosberg’s more conventional line saw him regain the initiative. But at the exit of the corner the pair made contact, Ricciardo’s front wing puncturing Rosberg’s tyre.

“I don’t know if he thought he’d cleared me yet,” said Ricciardo, “but we made contact and that was when he earned a puncture and I got the front wing damage.”

Rosberg view’s was that the onus was on Ricciardo to get out of his way. “It was my corner,” he insisted afterwards, “but he still had his front wing there and hit me and I got a puncture.” This version of events was not without irony given what happened at Spa last year. Unsurprisingly, the stewards did not see it that way, ruling that neither driver was “wholly or predominately to blame”.

It cost them both, however – Ricciardo pitted for a new front wing and fell behind Kvyat, while Rosberg limped back to the pits for another set of tyres. This meant Hamilton, who just a few laps earlier had asked his team whether he was now in last place and apologised for his clumsy errors, had jumped back in front of his team mate.

Mercedes had arrived in Hungary looking to take a record-breaking pair of podium finishes. That they failed to do so in a dry race in which neither of their drivers suffered any major technical problems beggared belief. There were surprises almost all the way down the running order as the field took the chequered flag. Kvyat held on to second place and his first podium finish despite his penalty. Ricciardo made it two Red Bulls on the podium.

Verstappen, who had served a drive-through penalty for driving too quickly behind the Safety Car, was fourth – though that position might have gone to his team mate had Toro Rosso’s reliability not run true to form.

Fernando Alonso’s McLaren was fifth thanks in part to his switch to soft tyres behind the Safety Car. Jenson Button didn’t do the same and ended up ninth, the two MP4-30s separated by Hamilton, Romain Grosjean (despite a five-second penalty for leaving the pits in an unsafe fashion) and Rosberg. The final point went to Marcus Ericsson’s Sauber.

Behind Felipe Nasr both Williams drivers were still running but out of the points. Massa, 12th, had been penalised five seconds during the race for failing to line up in his grid box and causing an aborted start.

But all of this paled in comparison to Pastor Maldonado, who tallied three penalties for a single race. His rap sheet included causing an avoidable collision with Perez, speeding in the pits and overtaking Will Stevens during the Safety Car period.

“Today is for Jules” Vettel may have had little idea of the chaos unfolding behind him, and was never troubled at the head of the field all race long. Surprisingly, the Hungaroring was one of few venues on the calendar where he had never won before, despite Red Bull having been so strong at this circuit during his time with them.

It was a victory steeped in significance. Not only did it come at the end of an emotional week for Formula One, but it saw him equal Ayrton Senna’s tally of 41 career wins.

Vettel agreed it was “something incredible” to have drawn level with Senna, but for him the true significance of the result lay elsewhere.

“I don’t know how to put this in words,” he said. “I think nevertheless today is for Jules and his family.”

41 comments on “Vettel and Ferrari win for Bianchi”