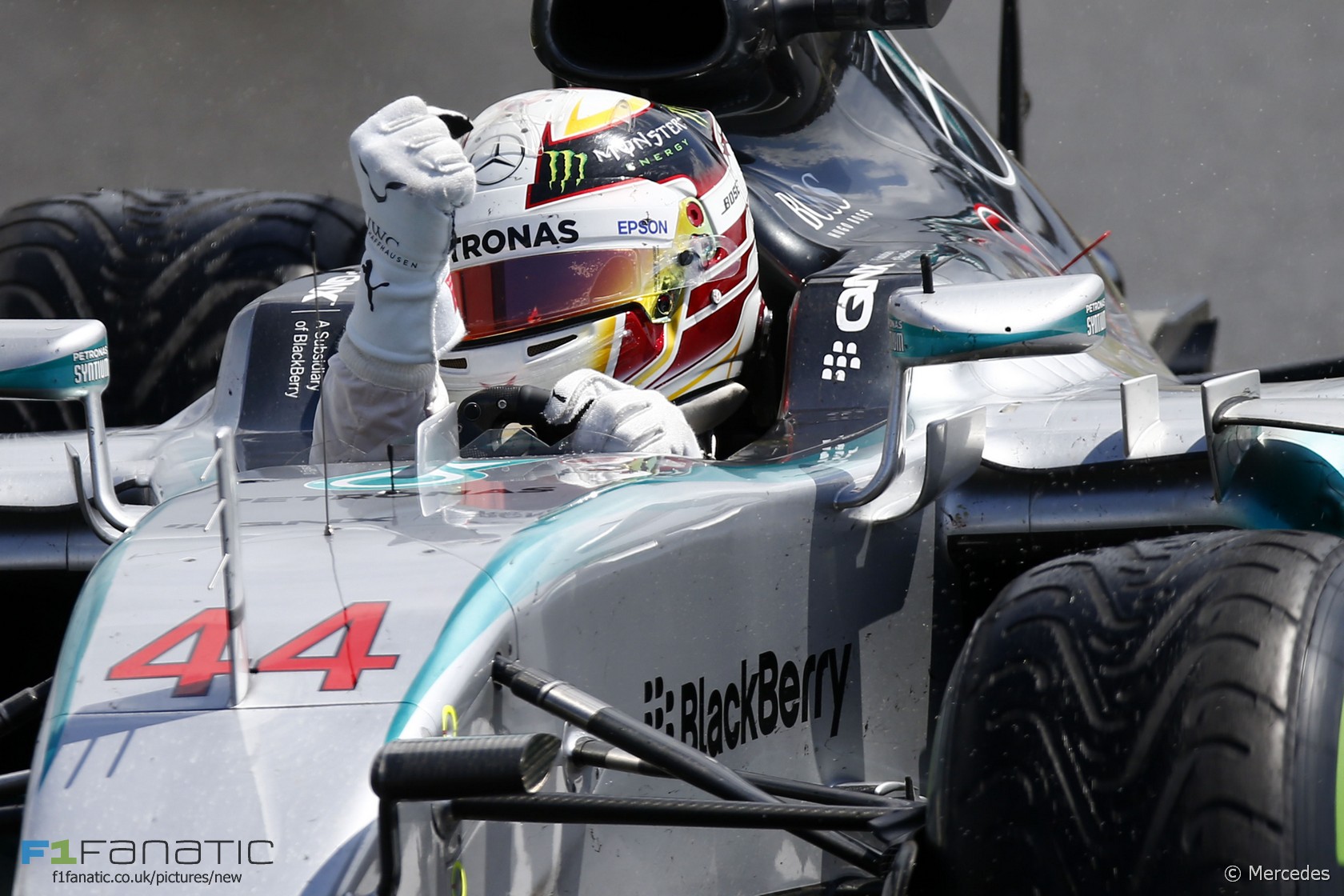 Thanks to an inspired and well-timed pit stop, Lewis Hamilton won his home Grand Prix for the second year running – and was your top pick for Driver of the Weekend as well.

Appropriately, the driver of car number 44 received 44.44% of the vote.

Hamilton took pole position and fastest lap on his way to victory, but this was far from being the straightforward success those details might suggest.

Friday practice did not go Hamilton’s way – for the second weekend in a row it looked as though Nico Rosberg had an advantage. But following overnight changes Hamilton was much happier with his car and he ended the final hour of practice half a second ahead of his team mate.

As qualifying began, the momentum swung once more, with Rosberg quicker in Q1 and Q2. But Hamilton prevailed when it mattered most, he won his eighth pole position out of nine attempts this year by little more than a tenth of a second.

From there it could have all been fairly simple but poor starts by both Mercedes drivers let the Williams pair from the second row. Hamilton initially headed Valtteri Bottas , but slipped behind him into third after a botched attempt to pass Felipe Massa at the restart.

Despite seemingly having more pace, Hamilton couldn’t make any impression on the two Williams cars out front, and had to use the undercut to finally get ahead of them at his first pit stop. This was just the break Hamilton needed, and with Rosberg stuck behind the two FW37s, it looked like a good haul of points for the championship leader.

However Silverstone showers were the next obstacle for Hamilton and his rivals to deal with. Following a brief initial drizzle a heavier burst of rain made the track very slippery. Rosberg found a new lease of life in the tricky conditions, and quickly dispatched Massa and Bottas before taking up to two seconds a lap out of Hamilton’s lead.

With his team mate bearing down on him, Hamilton made a vital call to pit for intermediate tyres with just eight laps to go. It proved the optimum moment to switch, and while Rosberg lost time with a tentative in-lap on slicks, Hamilton was now on course for his most hard-earned victory of the season so far. Immediately after the race some were unsure whether Hamilton had made the decisive call to pit or his team had, probably due in part to the confusing interview Niki Lauda gave to Sky television moments after the race. It had been Hamilton’s decision, as the radio messages during the race had already made clear.

His choice to come in for intermediates proved right and requires a level of insight and feeling for what is happening that is all too rare these days. Top that off with him being on top in qualify and genuinely having a much faster pace then the rest of the field and he is in a class of his own this UK GP weekend.
Vincent Ouwehand (@Bazzek)

That pit call (I don’t know whether it was team or Hamilton who decided it) on a slightly wet track even made his team mate think that Hamilton would throw his lead. Others might do the same but in Hamilton’s case he’s the front runner and he’s the first one to come in.
Ilham Shaq (@Hahailham1) Another driver who judged the conditions perfectly and gain from them was Sebastian Vettel, who jumped both Williams drivers to take a podium finish which hadn’t seemed likely following his difficult start to the race.

A podium was out of reach during the dry parts of the race, but he made it in the end through some intelligent pit work and gutsy driving.

That control in the wet before overtaking Raikkonen was cherry on top.
@Evered7

Felipe Massa was also highly rated after his excellent start and early stint in the lead.

Ended up going for Massa, great qualifying, great start and yes he was the slowest of the leading four in the first stint, but he got into that position so it was up to the other guys to overtake him, something they all failed to do. Car wasn’t really on it in the wet still did a decent job to maintain fourth.
@Davef1

And Nico Hulkenberg continued to gain the plaudits of fans for his efforts.

I voted for Hulkenberg as well. Impeccable weekend – he only lost places during the race because Force India devised a very conservative strategy for this race.
@atticus-2

This is something Kimi Raikkonen will be wary of, as Hulkenberg is one of several drivers tipped to replace him at Ferrari. The Ferrari driver had run well and might have figured highly in the poll had he not made a crucial error when the rain started to fall.

Another driver who had a forgettable weekend and didn’t feature in the voting was Daniel Ricciardo. He qualified three places behind Daniil Kvyat and was running behind him too when he retired on lap 21 with an electrical problem.

2015 Driver of the Weekend winners