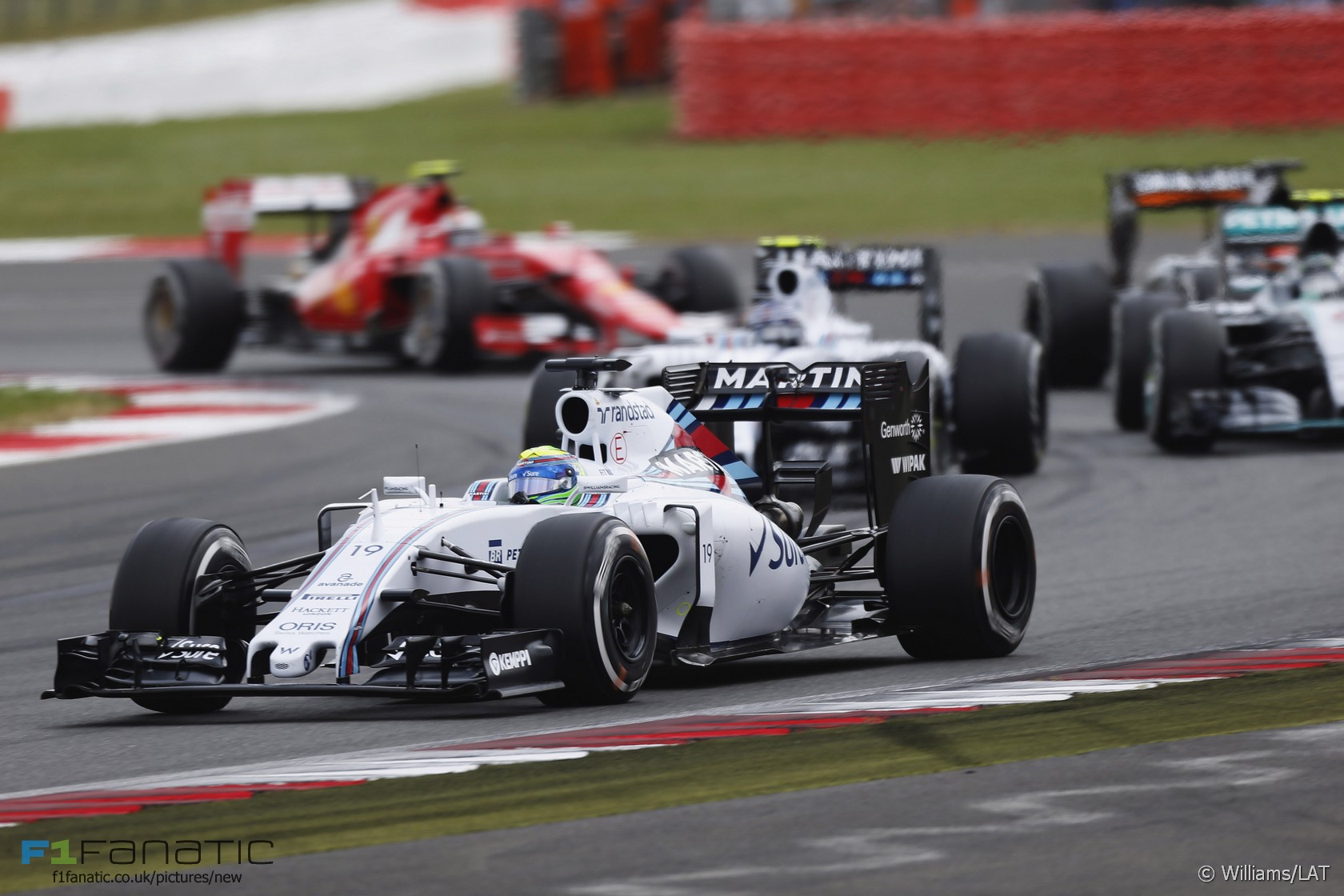 Formula One was in need of a lift and the British Grand Prix gave it just that. F1 Fanatic readers rated it 7.9 out of ten – the second-highest score for a race this year.

Was this race the shape of things to come for the rest of 2015 – or a one-off which was down to great getaways by the Williams drivers and a rain shower? Here’s what you had to say about the race.

Lewis Hamilton, Nico Rosberg and Sebastian Vettel occupied the podium for the sixth time this year, but after a fairly eventful race.

The start made it really interesting, with Bottas and Massa very close in the lead. Such a shame that Williams didn’t let them race, it would have been awesome.

I agree that the middle of the race could have been better, but come on, it’s unrealistic to expect excitement in every single lap. I was a bit disappointed with Williams because they could have stayed in first.

The rain spiced things up, Rosberg made two very good moves and was catching Hamilton like crazy, it’s a shame that the switch to intermediates froze the positions.

It’s strange, if you look at the result that’s the most predictable result ever, but the way we arrived there was very entertaining.
Yoshisune (@Yobo01)

There was a terrific start followed by suspense in terms of the first four cars following each other very closely with many of Bottas’ failed attempts providing some action. The next four were relatively close as well and there was even an overtake on Perez by Vettel although he conceded a few places easily at the start.

The first rain shuffled the pack a bit with Rosberg getting past both the Williams and chasing down Hamilton and almost successfully passing him on track.

Hamilton and Vettel then managed to play the situation to their advantage and get their pit stop right on cue. The last few laps were all about how the drivers managed the wet conditions and Kvyat chasing down Bottas was fun.

A nice three week break to savour the essence of the race and for teams to review their mistakes (which was plenty especially for Williams, Raikkonen and Ericsson).
@Evered7

More action in the pits than the track

It was a stalemate between Mercedes and Williams in the early stages.

We’ve had races earlier on were there was far more racing and overtaking than what we saw today. For the most part on the track nothing happened today, Virtually no overtaking, Not a great deal of close racing and it was far more of a procession overall than a couple other races so far.
LyndaGreen

Not everything is about overtakes. There was a lot of tension during the race, with the outcome decided very late on. Although not great, probably the best race of the season for me.
@John-h

I think it would have been a much better race if we didn’t have these mandatory pit stops that forces them to run both of the tyre compounds. I say that because the first 20 or so laps with the top four right together was great, But as soon as Lewis made his first stop and got the undercut it made the next section of the race quite dull until the rain started.
@Stefmeister

Did the rain make or break the race? Seeing F1 drivers do their thing in the rain is always a thrill, but did the wet conditions spoil some of the on-track contests?

A good race overall I think, particularly the first stint, but the rain spoiled that outcome for me a little, as I don’t think it did much for the actual racing, just swapped the positions about a bit, and left Williams with a worse outcome than they deserved today; they were much closer to the Mercedes on pace than expected today and looked like second and third was on without that rain.
Quant

A race of three parts really. First part was good with the four cars so close together, kept in interesting to watch. Second part from the pit-stops until the rain came was very boring, nothing of note happening whatsoever. Then the rain did come, and whilst it wasn’t as good as the first part, with the cars eventually spreading out, it did bring back some tension, as a drop of water usually does.
Simon (@Weeniebeenie)

I’m really surprised by the high ratings. The race had great promise in the beginning with the Williams being ahead, but in the end boiled down to an undercut by Hamilton.

The camera coverage was really bad and partly Sky’s coverage was so over-hyped, that it felt like an Apple event where adjectives made up entirety of what they were saying. I really don’t get why this race was so good for others.
@Venky

The race was good yes, but great, not really, not compared to races like Bahrain, Canada & Hungary last year.

This race will be rated higher than it should be, simply because it was so much better than what we’ve had of late.
Bradley Downton (@Bradley13)